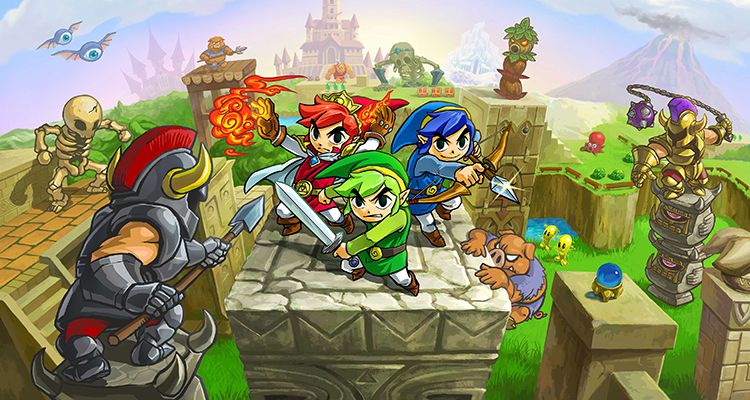 “It’s dangerous to go alone,” may be the now infamous first lines of dialogue in the original The Legend of Zelda, but in Nintendo’s latest Zelda title, The Legend of Zelda: Tri Force Heroes  you’ll never have to. Instead, you’ll always be paired with two other Links controlled by friends, strangers, or even yourself in the trickier single player mode. The end result is a satisfyingly fun and challenging cooperative puzzle game complete with tremendously designed tests in the form of unique mini dungeons that the necessitate teamwork, a firm grasp of each brilliant new mechanic, and just the right amount of communication, albeit limited, to overcome.

Multiplayer isn’t the only unfamiliar aspect of Tri Force Heroes. Absent are the kingdom of Hyrule, the Princess Zelda, and the Triforce in the typical sense. Instead, the game’s story takes place in the fashion-centric kingdom of Hytopia, a place where all citizens look up to their ultra fashionable royal, Princess Styla. When an evil witch known as “The Lady” places a curse upon Styla leaving her trapped inside an ugly, unremovable, black jump suit, all of Hytopia is thrown in to despair. Styla’s father, King Tuft, pleads for any hero who can help his daughter, though in his heart he believes that only the prophesied Tri Force Heroes will be able to help, three heroes courageous enough to travel in to the Drablands and challenge The Lady, ultimately removing the curse upon Princess Styla. The resulting game is a fashion-oriented, Parisian-esque, Legend of Zelda experience. 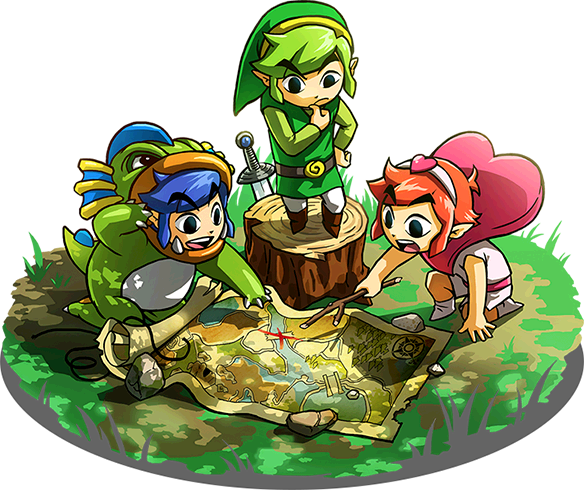 Unlike Hyrule, Hytopia operates more as a hub world rather than the center of a larger overworld, like those in most Zelda game. From Hytopia’s castle, players can gather together before venturing in to the Drablands. There are many ways to connect and play. Players can search for unknown allies online, or connect and play with friends, or even a combination of both. When opting to play with random players online, players whom my friends and I have taken to calling Rando Calrissians (because Star Wars), it’s as simple as selecting one of the world map’s eight themed areas and then finding players eager to venture to the same destination. It’s worth noting that when playing with one friend and one stranger, as opposed to two friends, both friends must connect online to find a third, even if the friends are in the same room, as the option to play locally is exclusive to three players playing in close proximity. When all players are connected and ready for adventure, rather than exploring an overworld in search of each dungeon, players merely select one of the aforementioned areas (ie. the Riverside with water oriented challenges, or the fiery Volcano locale) and then vote on one of its four segregated dungeons. 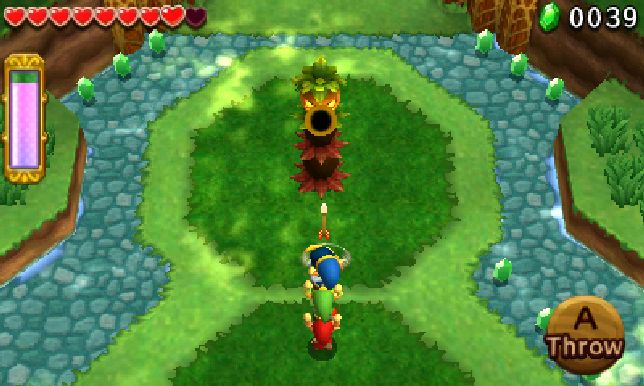 The dungeons are absolutely the highlight of the game.  Similar to other multiplayer Zelda escapades, such Four Swords, at the beginning of each stage or dungeon players each select a tool necessary to complete that particular dungeon. Even the simpler dungeons which hand each player the same tool or weapon are well-designed and require teamwork and coordination. Adding a literal layer to the challenge is the ability for each of the three heroes to stack on top of one another, forming a totem. The totem mechanic is used excellently from the get go. In one early dungeon one player must lift another up to shoot a switch with an arrow before tossing the second player to the third player, who is waiting on the other side of a small gap, so the second player can shoot a switch on the other side. Tools and weapons are typically familiar fare from past Zelda entries, such as bows, bombs, boomerangs, and gripshots that require energy from a meter rather than ammo similar to the game’s predecessor, A Link Between Worlds. The dungeons are at their best when each player is given a unique tool and players must truly work as a team and fulfill and individual role to complete the stage. While the dungeons are relatively small, taking ten to twenty minutes to accomplish, despite their size they are satisfyingly puzzling, and their length works well so that the game is easy to pick up and put down without fear of a large time commitment, particularly necessary in multiplayer affair. While I hope that if the game gets a proper sequel Nintendo doesn’t fear to include lengthier and even harder dungeons for the Zelda adept, what players have been given in Tri Force Heroes is enjoyable as is. 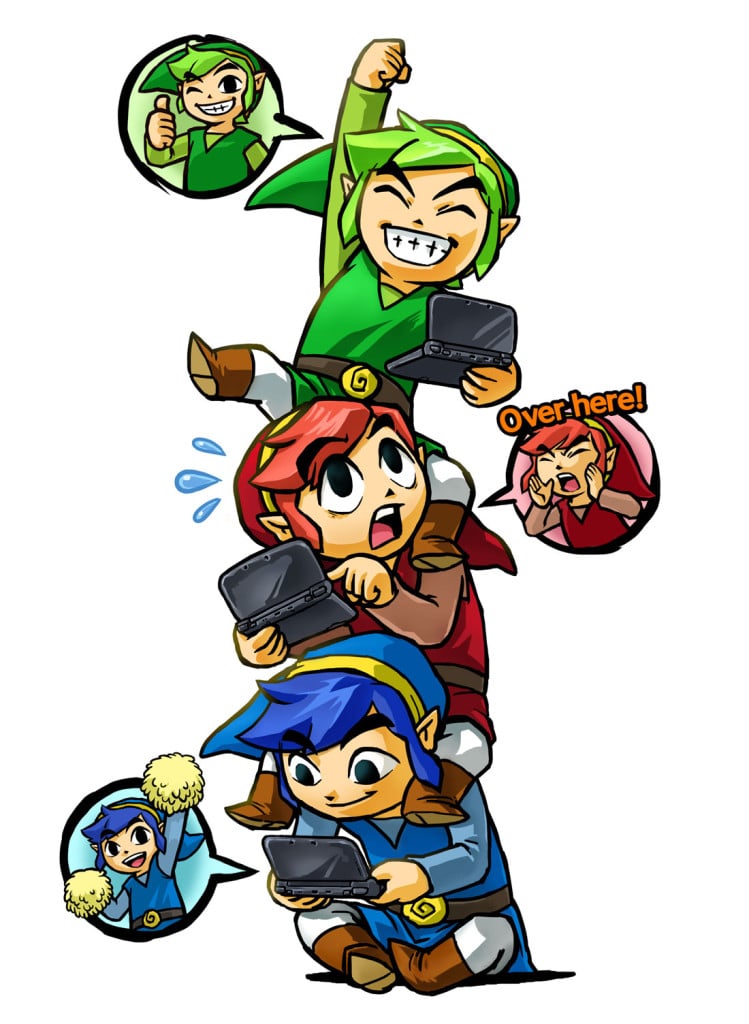 Those seeking a challenge will find an added layer through the lack of a proper voice chat, leaving each player to communicate with their team through eight different emotes. This has a polarizing effect on the game. In some instances, particularly amidst a competent team, it provides laugh out loud humor to tense moments, such as when one player accidentally throws another off of a ledge, and rather than the culprit using the shrug emote to denote the mistake being their bad, they use the thumbs up. On the other end of the spectrum, it can be frustrating when playing with a rando who simply doesn’t understand what’s going on, as even the item emote can’t describe to rookies what they should be doing with it. In one antagonizing instance, a friend and I were playing a relatively challenging boss battle in which players must use the gust jar to blast bombs back at the boss. Our teammate, Rando Calrissian, didn’t understand that his gust jar couldn’t damage the boss on his own, despite his relentless efforts. As each team shares a health meter, another welcome challenge to proceedings, when a player doesn’t play cautiously, they can kill their teammates, which is what happened in this particular instance. I thought it was common knowledge that bombs hurt, but I guess not. While the lack of voice chat did prevent my friend and I from swearing at our incompetent “ally,” who proved to be more of a negative asset, ultimately resulting in a friendly space where everyone is welcome, it also prevented us from explaining to this player how to accomplish our collective goal. This does prevent puzzles from being spoiled by other players, but it can have the detrimental effect of holding back two quality players because of one inexperienced *cough* stupid *cough* player. The game may be rated “E for Everyone,” but those familiar with the franchise know that puzzles and challenges can require sharp wit and strength as a player, and isn’t necessarily for everyone or all ages. 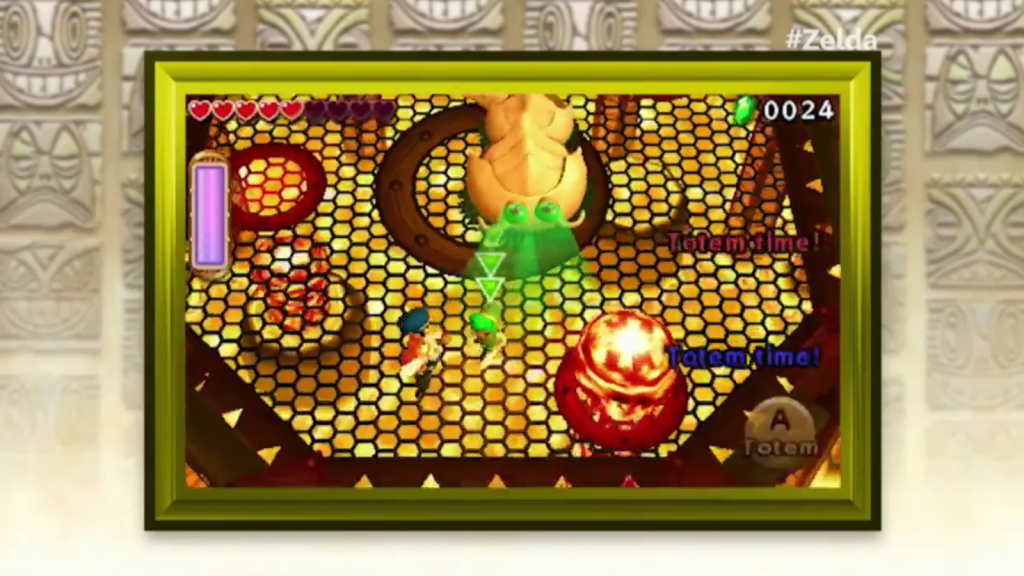 Instead of the typical inventory of weapons and tools that usually fill up Link’s pockets, players collect outfits with different magical traits to help them in their trials. The Legendary dress, a replica of Princess Zelda’s dress, for example, makes heart drops more common. The Goron Suit makes players impervious to fire. To craft each outfit, players must collect materials awarded to the player at the end of each stage. At the end of a dungeon, each player opens a chest and receives one of two materials for that particular level. One of the chests contains an especially rare material, usually corresponding to a very specific outfit. This adds replay value to the game, as outfits both make the game easier and sillier as Link is dressed up in dresses, like animals, or specific characters from the series. Further, the outfits are in no way necessary to the success of the player, so replaying a stage over and over to get a specific material is never necessary. Unfortunately for some collectors out there, certain outfits require Friend Tokens, a material only gained from locally connecting with other players. Each new console connected with will provide one, and only one, token, and with eight total tokens necessary to get every outfit, that’s eight different 3DSs that have to be played with to get every outfit. Consequently, some those with too few friends with a 3DS or no friends nearby will struggle to ever get these. 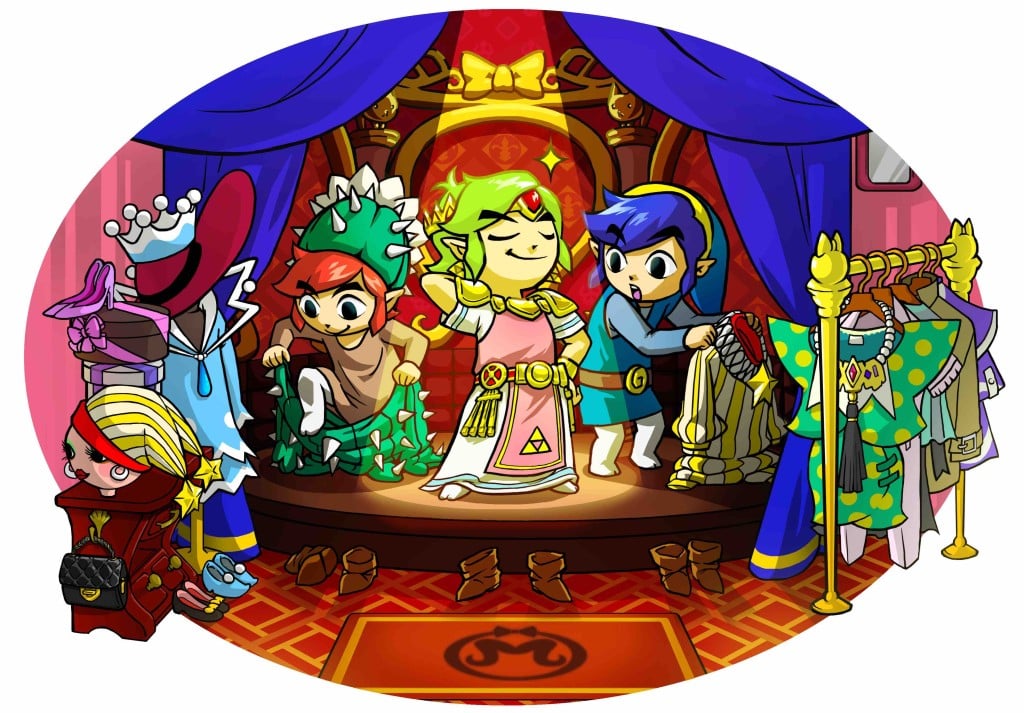 As mentioned, players can even go it alone in Tri Force Heroes. In the solo play mode, the player takes control of all three Links, one at a time, and must switch between the three to solve each and every puzzle that an actual team of three must. While the dungeons are the exact same as in multiplayer, it adds an interesting layer of challenge to a somewhat challenging game that I am sure many hardcore fans will flock to. Also open to players is the competitive Colosseum mode in which players can battle against one another for materials. I doubt the mode will take anyone’s primary attention, but it is a welcome diversion to the cooperation the rest of the game entails.

Tri Force Heroes is at its absolute best when played with two dependable friends in the same room or communicating electronically somehow, though quite frequently perfect strangers who can’t say a word to one another but can only communicate through the eight given emotes will fare surprisingly well together, and even flourish while their coalition lasts. Conversely, even while playing with one friend, a single rando found online can kill the entire experience and make clearing a dungeon seemingly impossible. At its best the game is a really fun, quirky Zelda entry centered around playing with friends and new allies, and residents of Hyrule will feel right at home in Hytopia. At its worst, with occasional lag hiccups and all the other baggage that comes with online play, including players quitting, slow players, players going missing, and everything in between, Tri Force Heroes can fall a little short of the mark left by the rest of the stellar franchise. Overall, the excellently crafted dungeons and puzzles, thrilling boss fights, and often hilarious multiplayer make The Legend of Zelda: Tri Force Heroes a worthwhile adventure.