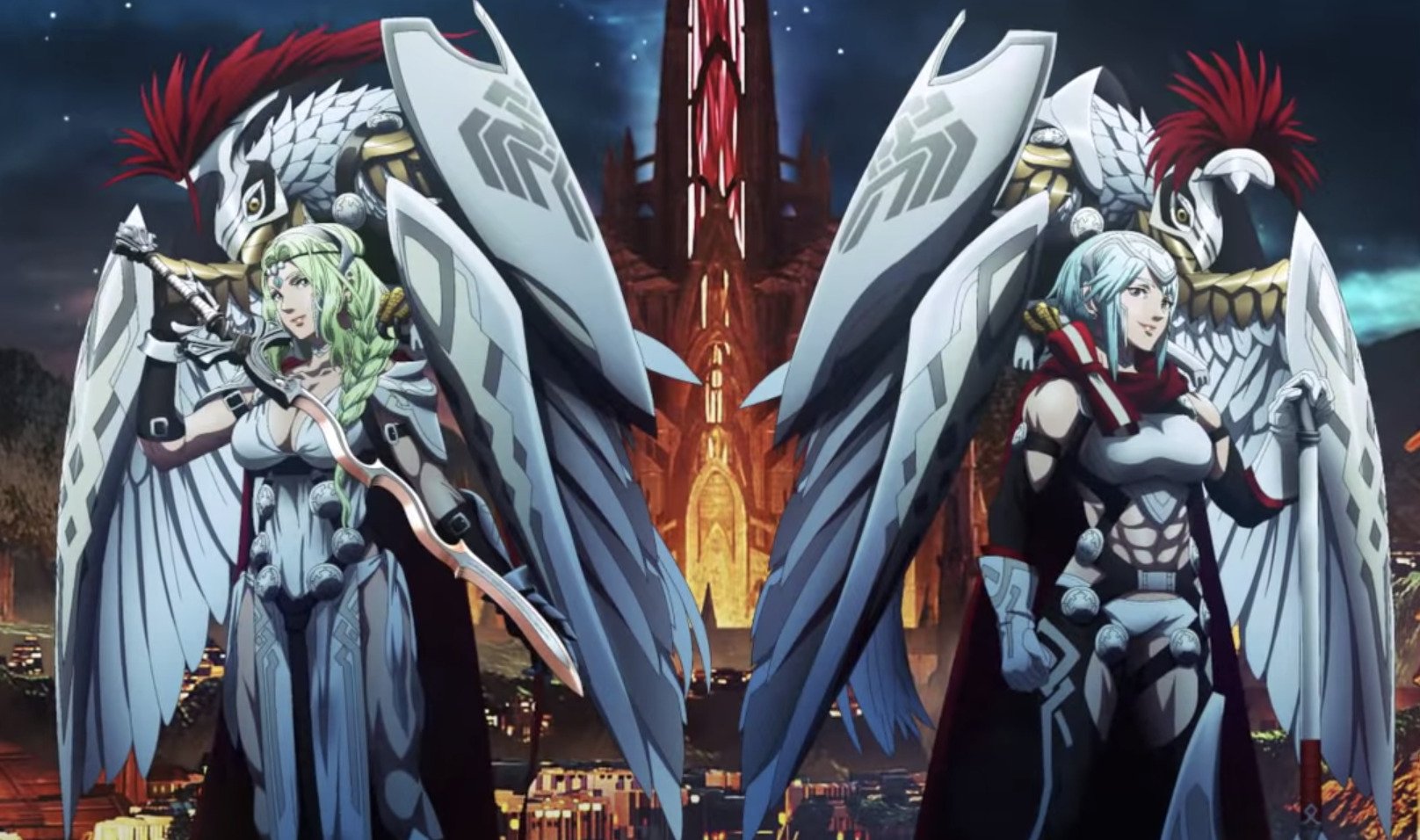 The Fire Emblem series has used mythology for the names of many of its characters, from Minerva in Mystery of the Emblem to Ares in Genealogy of the Holy War. Despite the use of Greek, Roman, and even lesser-known mythologies such as Irish, Fire Emblem tends to rely on Norse mythology for inspiration the most. With the story of Fire Emblem Heroes, the writers decided to use even more Norse mythology influence than ever, with Books II through V specifically being based entirely on mythological characters rather than just their names. The simple references can make it hard to understand the symbolism sometimes, but here are some brief explanations of the mythology used throughout the game’s first five books.

The very first book of Fire Emblem Heroes does not rely on Norse myths for its story, however, it instead focuses on introducing the setting through the conflict between the kingdoms of Askr and Embla. Most of the story in this book centers around the concept of summoning heroes and binding with contracts, as Princess Veronica of Embla did with her heroes. There was not much inspiration from Norse mythology at this point aside from the names of the kingdoms.

The characters introduced in this book, such as Alfonse, Sharena, Anna, Veronica, and the mysterious man are not based on any mythological characters. However, Askr and Embla are named after Ask and Embla, the first two humans created by the gods in Norse mythology. The two of them were created from trees by Odin and his brothers. After both being given the gift of life, movement, intelligence, and senses by the gods, Ask and Embla went on to create the rest of the human race.

Book II introduces Surtr, ruler of the kingdom of Múspell, and his opponents from the icy land of Nifl. Unlike its predecessor, all of the new characters and places in Book II are based entirely on Norse mythology. However, the events in the game are nothing like those in the source material.

Múspell and Nifl are based on Múspelheim and Niflheim, worlds of fire and ice respectively. These two worlds were vital in the Norse creation story; the rivers from Niflheim covered the void, Ginnungagap, with a thick layer of ice. However, Múspelheim was also near the void and melted the ice. The melted ice ended up creating the first being known as Ymir. The Nifl siblings also got their names from some of the rivers that helped make Ymir.

Surtr is based on a fire giant that hailed from Múspelheim. He was featured prominently in the myth of Ragnarök, the apocalypse where almost every human and god dies. In this myth, Surtr set fire to the world and killed the god Freyr. Laegjarn and Laevatein were not his daughters; rather, Lævateinn was a weapon made by Loki, and Lægjarn — possibly another name for Loki — was the chest that Lævateinn was locked away in. Sinmara, known in the game as Surtr’s axe, was his wife and the keeper of Lævateinn.

Loki was also officially introduced in this book, and she is of course named after the famous trickster. Her ability to disguise herself as other people such as Anna and Ylgr is definitely a direct reference to the mythological Loki’s ability to shapeshift.

Hel, the ruler of Hel, invaded Askr not long after Surtr did, bringing along her army of the dead to attack the living. Hel shares her name with the land she rules not only in the game, but in the myths as well. Like many other Norse gods, she was also known by other names such as Hella or Hellia. Much about Hel in the game, both the place and the person, is similar to the myths, with the exception of Hel not being Loki’s daughter. Eir also has no relation to Hel, being either a goddess or valkyrie associated with medicine and healing.

Hel’s generals Líf and Thrasir are named after Líf and Lífthrasir, with the genders reversed. The two of them were the only human survivors of Ragnarök, having hid away from Surtr’s fires in a forest called Hoddmímis holt. They were meant to repopulate the world after Ragnarök, similar to how Ask and Embla populated the world to begin with.

As mentioned in the Book IV of Fire Emblem Heroes, Ljósálfar and Dökkálfar are light and dark elves respectively. Ljósálfheimr, also known as Álfheimr, was the home of the Ljósálfar, while the Dökkálfar lived within the earth. The world of Álfheimr was a gift to Freyr when he was just a baby, hence his connection to the Ljósálfar in Heroes.

The mythological Freyr and Freyja are Vanir, a kind of god separate from the other Norse gods. Freyr is the god of good harvest, peace, prosperity, and sunshine. However, as mentioned earlier, he was killed by Surtr during Ragnarök. Freyja, his sister, is associated with love, beauty, and war, and ruled over an afterlife called Fólkvangr, where some warriors that died in battle went to. She had a husband named Ódr who was rarely around.

Surprisingly, Heroes Freyja’s feelings for Freyr are mentioned in a poem where Loki gets into a fight with almost all the gods at a get-together. Loki said that every god present had been the lover of Freyja, and when she objected, Loki accused her of taking Freyr as her lover too. In Loki’s likely imaginary tale, all of the gods laughed at Freyja and Freyr when they were caught together. Freyja and Freyr’s father, Njördr, said that it was harmless for a woman to cheat and accused Loki of being a pervert for the mere crime of having children. This was never mentioned again, although Fire Emblem’s portrayal of Freyja was probably based on this specific line of Loki’s.

Niðavellir from Book V is the home of the dwarves, including the king Fáfnir and his stepsiblings Reginn and Ótr. The characters they are all named after are actually brothers, including Regin, who is male. The myth they are featured in is pretty funny; Loki killed an otter while on a walk with Odin and the minor god Hœnir, and they decided to skin it and show it off to Fáfnir, Regin, and Ótr’s father. However, the otter was actually Ótr, who just hangs out as an otter during the day. Odin and Hœnir were held captive and Loki was sent out to collect the ransom gold in Ótr’s skin. Fáfnir killed his father in order to take the treasure and became a dragon.

Regin wanted the treasure too, so he sent Sigurd — this is where Genealogy of the Holy War’s Sigurd got his name from — out to kill Fáfnir. Sigurd succeeded in killing Fáfnir, then decided to cook Fáfnir’s heart. When he drank Fáfnir’s blood, he suddenly gained the ability to understand birds. Birds warned him of Regin’s plan to kill him, so Sigurd killed him first. Sigurd proceeded to eat half of Fáfnir’s heart on his own, and kept the other half to give to his wife Gudrun, not Deirdre. All of this was thanks to Loki, who just decided it might be fun to kill a random otter. However, no aspects of this story are present in Book V.

Jötunheimr is named after one of the nine worlds in Norse mythology, the home of the Jötnar. Despite being called Jötnar in Heroes, they are usually known as giants in English. Giants weren’t actually giant; they were pretty average-sized. Surtr, as mentioned earlier, was also a Jötunn and Loki is at least half Jötunn. The princesses of Jötunheimr, Nótt, and Dagr, were not sisters in the myths. Nótt was the personification of the night, while Dagr was actually her son and personification of the day.

There is much more to Fire Emblem Heroes‘ connection with Norse mythology than just these references, such as weapon names and even quite a few other characters. Some characters from the main series are even named after Norse mythological figures, with a noticeable one being Odin and a more obscure one being Edelgard’s last name, Hresvelg. These names can give a lot of insight into characters and the story, especially in Fire Emblem Heroes.