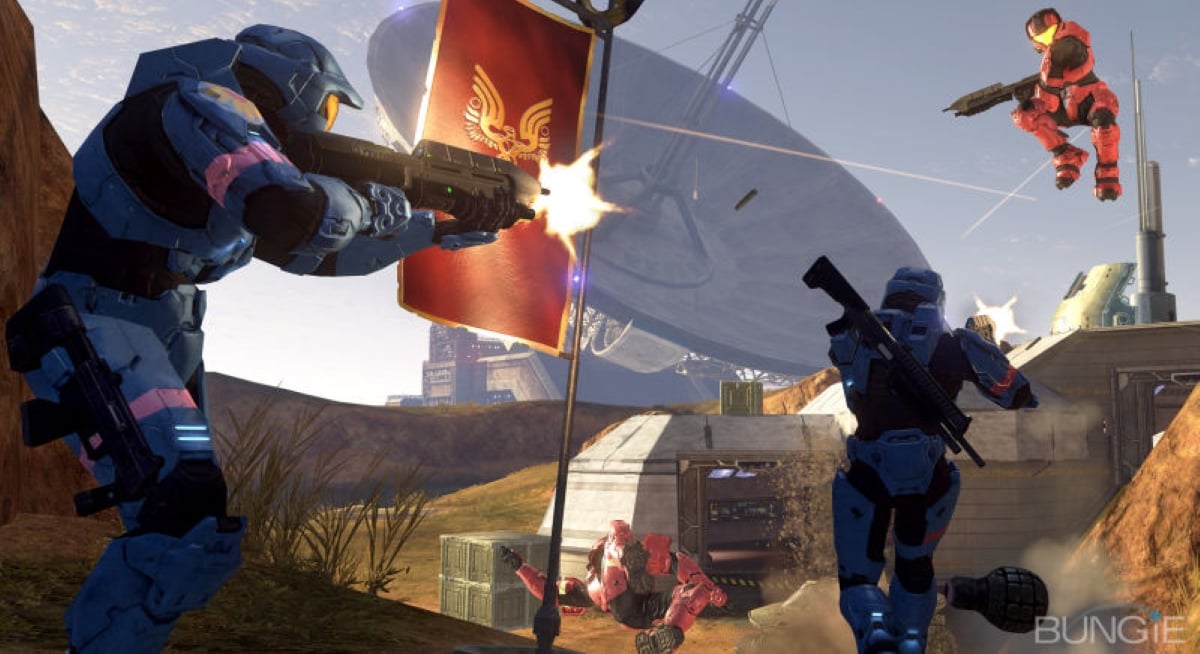 In a series that now boasts well over 100 official matchmaking maps to play on, narrowing down Halo’s 15 best multiplayer locations is never going to be an easy feat even if the recent release of Halo Infinite offers enough encouragement to do just that. As such, consider this a carefully prepared tour de force of the brightest and best venues that Halo has to offer–and of course the deadliest. With the 343 Industries showing no signs of slowing down their online endeavors and Infinite still potentially holding many more new battlegrounds to fight on, these are the 15 best multiplayer maps the Halo franchise has had to offer so far.

The only Halo Infinite map to make the cut, Highpower is all about vertical advantage, as the name might suggest, offering plenty of vertical ambush points and opportunities to reign down death from above. There’s a tall tower, and the map offers breathtaking views of the surrounding mountains and the UNSC frigate hovering menacingly over the battlefield. In terms of gameplay, Highpower has only one exclusive use, being a great venue for the large-scale 12v12 carnage that is Big Team Battle. Truly, power goes to those on high.

Halo 4 has plenty of average or above-average maps, but few really good ones, Exile being a rare exception. Offering a mix of short and long-range combat, it’s ideal for Big Team Battle and, depending on one’s preference, Capture the Flag. Right from the get-go, vehicles battle it out in the open spaces whilst an eternal close-quarters battle rages in the central cave. However, the vehicles combined with the smallness of the map means that one team can easily dominate, making it possible to do rapid victory laps in a Ghost or Mongoose.

The Pit might not be much to look at aesthetically, but it does have a lot going for it on a design level by not giving anyone an unfair advantage. With no vehicles and few meaningful camping spots for power weapons, The Pit forces players to rely on raw skill and cunning, which makes sense given that it’s supposed to be a UNSC training facility. Other than the Energy Sword spawn area, which probably isn’t worth fighting over, this map is all about movement and territory. A mid-range haven, it’s also the perfect proving ground for the Battle Rifle.

Based on a building from the campaign, Sword Base was one of four maps to debut in the Halo: Reach multiplayer beta prior to the game’s full release. Contrary to what the name might suggest, only one Energy Sword spawns on the map, but with the tight corridors and vertical drop points, it can be deadly in the right hands. The gravity lifts in particular offer excellent ambush spots. Sword Base’s symmetrical design lends itself to objective-based modes like Stockpile and Capture the Flag rather than Slayer.

Unusually for a small-sized map, Ascension is great for sniping. Set on an island with tower vantage points and raised narrow walkways above the water, medium to long-range fights predominate and the center dish is best avoided. Yet Halo came perilously close to being without this iconic map, as during production Bungie found that player traffic was too focused on the center, until realizing they had to add the side walkways to allow for more routes. Phew! Ascension was remade as ‘Pinnacle’ on Halo: Reach and as ‘Zenith’ on Halo 2: Anniversary, though neither lives up to the classic.

As the name might suggest, this map is divided by a creek or narrow body of water running down the middle. Like Blood Gulch, Battle Creek follows the same two-base formula. Unlike Blood Gulch, there’s a far shorter commute between them. Each base also has a lot more depth to it, with a basement, tunnels, holes to throw through grenades, and even a two-way teleporter at the rear exterior of the base which takes the player straight to the one belonging to the enemy team – a handy getaway route in Capture the Flag matches. Getting there is the main problem.

Although best suited to mid-range combat, there’s something here for every style of play, with plenty of vehicles and close-quarters spaces as well, not to mention a self-contained beach area. Be warned, there might not be much time for sunbathing. Zanzibar is also high on environmental interaction as it’s possible to jump onto the giant spinning wheel in the center to grab the power weapons. Then there’s the gates and bridges which can be opened and closed by players. Like any good Halo multiplayer map, Zanzibar got a remake in the form of Halo 3‘s Last Resort, which is much less remembered.

Inspired by Blood Gulch, Coagulation is basically a rework of that iconic map. Although mostly identical, it is the version most players would have been introduced to, which makes it worth including. Not everyone is old enough to have owned Halo: Combat Evolved and had access to LAN play. Coagulation does add a few gimmicks that are missing from Blood Gulch, however, such as a new lower level in each base containing a Banshee. Additional rocks and trees also allow for more cover in the dangerous no man’s land between the bases.

Inspired by Blood Gulch, Valhalla is yet another iteration of that iconic Halo: Combat Evolved map. Unlike Coagulation, though, it’s distinct enough to have its own unique feel. Like before, there are the same two bases at either end, except now there’s a lot more between them in that central no man’s land, like giant rocky outcrops, streams, and even an idyllic-looking waterfall. Matches usually begin with a Warthog rush and a bid to take out the opposing team’s Banshee with the Spartan Laser that spawns on the center hill – a well-placed impetus for teams to get out their comfort zone and advance. Valhalla reappears virtually unchanged as ‘Ragnarok’ in Halo 4.

Remade as ‘Tombstone’ in Halo 2, Hang ‘Em High stands out for its unorthodox map design. Completely asymmetrical and littered with small obelisk-type blocks (‘tombstones’), it’s certainly one of Halo’s more unusual-looking venues, with vertical combat between players on the ground and the overhanging upper levels. Yet, for all that, it works. And despite being a sniper’s playground, it’s also something of an all-purpose map, playing well on both Slayer and Capture the Flag.

An almost identical remake of the Halo 2 map ‘Lockout’, Lockdown gets brownie points for sheer good looks. Snow maps are rare enough in Halo multiplayer as it is, so it’s always nice to see one get a 2014-style graphical makeover. The differences from its Halo 2 predecessor are minor, but there is the addition of three breakable stalactites at high points of the map that, if shot, will collapse and crush any enemy campers lurking underneath. It’s a perfect way on the developers’ part to bring in the natural scenery.

The ultimate free-for-all arena battleground, Midship was the first Halo 2 map to be designed by Bungie, the sole aim being to create the “absolutely smallest map possible”. Set aboard a Covenant warship, the color purple permeates, along with a touch of pink. Tight and unbearably claustrophobic, there are few places to run and even fewer places to hide. As such, the Energy Sword on the swinging platform at the top (mind your step!) is the most sought-after weapon on the map, its wielder guaranteed at least a couple of kills.

With its bright blue lights and alien greenery, Guardian may look innocent enough, but being an MLG stomping ground and a favorite for intense 1v1 duels, it’s more like a rookies’ graveyard. With multiple levels and difficult to access hiding spots, there’s quick transitions in play and plenty of opportunities for skill, especially when it comes to the jumping department. It’s tight confines and many escape routes make Guardian ideal for niche-type game modes such as Oddball and King Of The Hill. All of that combines to make Guardian the place where boys become men.

Unlike most other ivory towers, this one isn’t best suited to peace and quiet. Tight and frantic, it’s more likely to make one panic than ponder and comes with an urban, gritty feel. Situated in New Mombasa, there’s also grass and tropical trees set among the concrete. Slayer matches are marked by intense fights over the strategically placed power weapons, which can cause havoc in the correct hands. Controlling the center circle is key, but doing so requires navigating the tightly-contested ledges, elevators, and walkways surrounding it. The Halo: Reach map ‘Reflection’ is based on Ivory Tower.

Its Blood Gulch, what more is there to say? Well, okay then… A two-base, near-symmetrical box canyon map especially suited to Capture the Flag, Blood Gulch is rightly regarded as the best in the series. It’s maybe saying something that Blood Gulch also happens to be one of the simplest. It’s just two opposing bases, and other than several flanking passages down the sides, there are no alternate routes for attackers. Such is Blood Gulch’s popularity that it was used as a recurring venue in the Red vs. Blue machinima series.