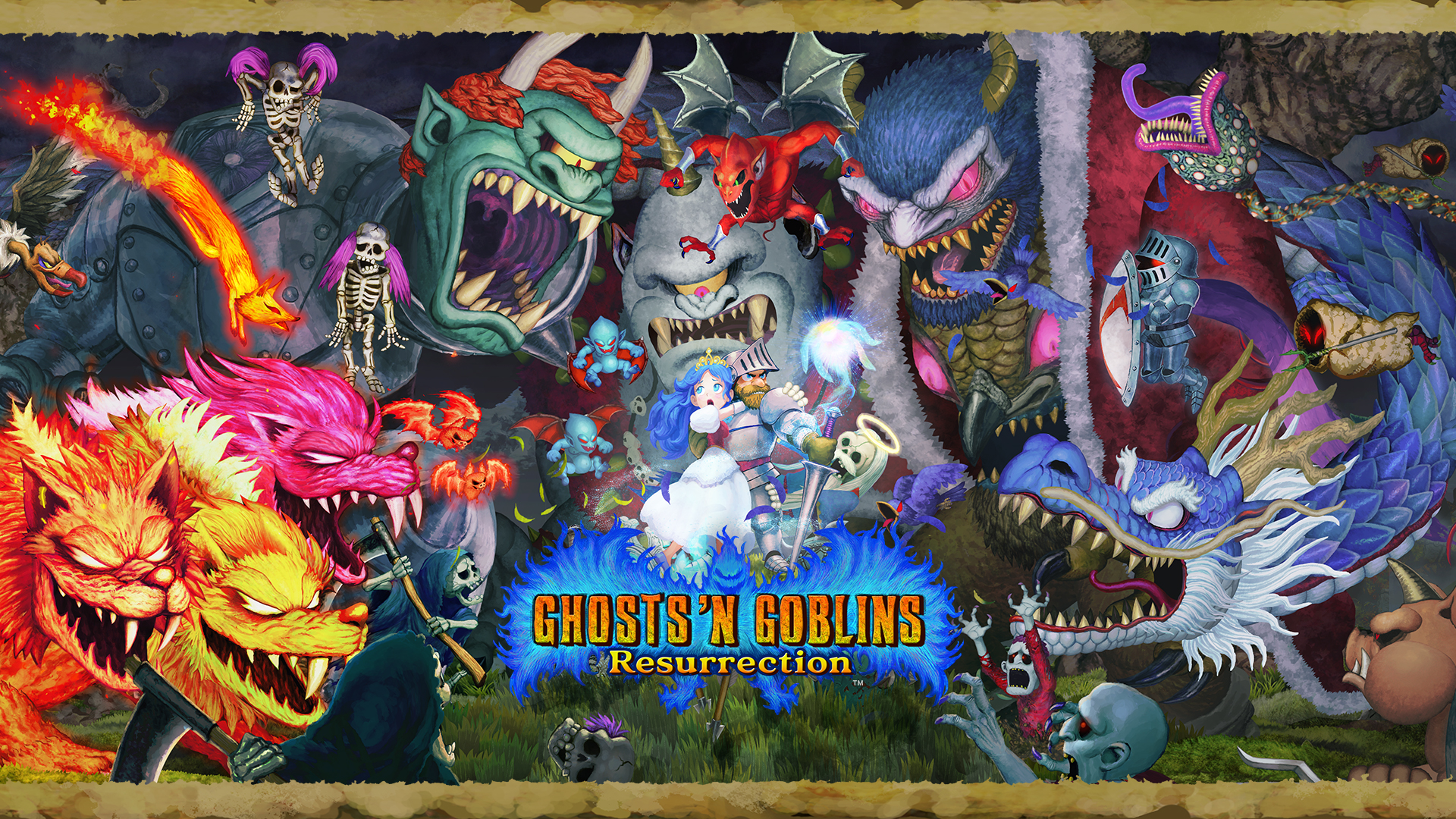 There is a certain ethos baked into the design of many arcade games. Most people think of them as tough: they’re quarter-munchers or money pits on the whole, because players can lose all of their lives in seconds before being asked to drop another quarter for a continue. Recent ports and collections of old-school arcade games aim to alleviate this frustration with rewind features or save states. But Ghosts ‘n Goblins Resurrection sticks to its roots. A confident reboot of the long-dormant franchise with stunning art direction and a few neat twists, Ghosts ‘n Goblins Resurrection will remind players what there is to love about facing sheer difficulty and overcoming it.

A Throwback with Bite

The recent Capcom Arcade Stadium makes the case that old arcade games benefit from additional user-friendly features. Ghosts ‘n Goblins Resurrection takes that idea and sprinkles it liberally throughout the hardest game released in 2021 so far. But to consider the present, one must look to the past. Comparing this most recent entry in the franchise to its predecessors is enlightening, and might help players appreciate the design choices made in Resurrection.

Ghosts ‘n Goblins enjoyed great success in arcades in the mid-1980s for its unrelenting difficulty. The player character was intensely vulnerable, and as Halloween-themed enemies flooded the screen, only the most proficient 2D action-platformer fans were able to make it through. The arcade sequel, Ghouls ‘n Ghosts, followed in the first game’s footsteps, and even console ports didn’t stray too far from the tough-as-nails aspects of what came before. The series is renowned for how tough it is, and even features one of the most stomach-dropping final boss encounters in gaming history: upon meeting and defeating the final boss, players must then run through the entire game again. Resurrection manages to recapture this spirit, and players can even experience this modern reinvention side-by-side with the original Ghosts ‘n Goblins, due to Capcom Arcade Stadium.

The story literally unfolds on a scroll before players even press start. In an art style that can only be described as “illuminated manuscript plus Scooby-Doo”, Arthur and a beautiful maiden are lolling about on a verdant green hillside when a demon swoops in and takes the lady away. Arthur gives chase immediately, and the adventure begins. Capcom clearly made an effort to match the tone of the original game; in fact, this opening cutscene more or less mirrors that of the first game. Seasoned players used to the moody sprites of the original might be turned off by the art direction, but in action, Resurrection is utterly gorgeous.

Painterly art direction and wonderful music mask the game’s true purpose: sadistic, maddening gameplay. People unfamiliar with the original might throw up their hands in utter frustration at just how hard it is to progress in each of Resurrection‘s stages. The game’s own website touts its difficulty, in a way that feels almost smug. “Oh, you say you like hard games? Well, how about this?” Ghosts ‘n Goblins Resurrection fortunately has modern features like unlimited restarts and friendly checkpointing, but it can still feel shocking how tough getting past a difficult jumping section can be.

The game’s faithfulness to the past can occasionally be an impediment. Arthur moves along at a leisurely pace, and there’s no dash or dodge option, or anything remotely close to it. The Ghosts ‘n Goblins franchise occupies a unique space in 2D platforming: the jumping and traversal don’t feel very precise, and the combat doesn’t feel very punchy. It’s not a run-and-gun like Contra, even though there’s a rapid-fire option for projectiles. Arthur must stop moving to attack, in seeming defiance to the fluidity associated with modern 2D games. Players also cannot control Arthur’s trajectory in the air while jumping, like Super Meat Boy. Jumping is almost a binary state. Players can jump straight up, or they can jump in an arc to the side; short hops are partically out of the question.

Simply travelling from one side of each long stage is a hard-fought battle, but players have a few options to make their playthroughs unique. Players can choose their starting stage, and paths fork frequently. There is no punishment for quitting out of a stage and starting another, another modern touch. But it isn’t as though there is an “easy” path and a “hard” one; it’s all tough, and only gets tougher. Boss fights are particularly challenging, but the checkpointing makes this slightly more palatable. As heartbreaking as it may be to lose to the same boss fifty times in a row, at least the player can pick up right before the battle begins.

Beyond forking paths, there are more modern conveniences at play. The way Resurrection approaches upgrades and collectibles is unique, especially compared to its predecessors. Arthur can find Umbral Bees buzzing around stages by being in the right place at the right time; collect enough of them, and Arthur can return them to the Umbral Tree, a literalized skill tree. Unlocking nodes on this tree grants Arthur the ability to cast magic spells, ranging from the screen-clearing lightning bolt to a cloning spell that doubles the Arthurs onscreen. These spells are activated by simply holding down a button, and change up the simple combat without feeling like too big of a stretch.

Ghosts ‘n Goblins Resurrection knows what its fans want: an unrelenting, uncompromising, unforgiving platformer. Its brutality will surprise younger players who didn’t grow up in arcades, and maybe even those who nostalgically remember this series being hard, but not that hard. It often feels unkind and even unfair, by design. But the seemingly inflexible difficulty masks some genuine innovation (who knew that the ability to throw weapons straight up could be such a game-changer?). There is even local co-op, which basically turns this game into something entirely different, and a list of difficult feats for achievement chasers.

As frustrating and difficult and cruel as Resurrection can be, there are moments of euphoria to be found. Since every battle, from the lowliest zombie to the triple-threat insanity of the Cerberus boss fight, can be deadly, it feels like an accomplishment to even make it past one checkpoint. Finding secrets is genuinely exciting, and mastering the seldom-found Hell Holes is worth bragging about. For those with a masochistic streak, Ghosts ‘n Goblins Resurrection could open up a whole new world of difficult games. For everyone else, modern accessibility features like difficulty settings and co-op take the sting out of death.