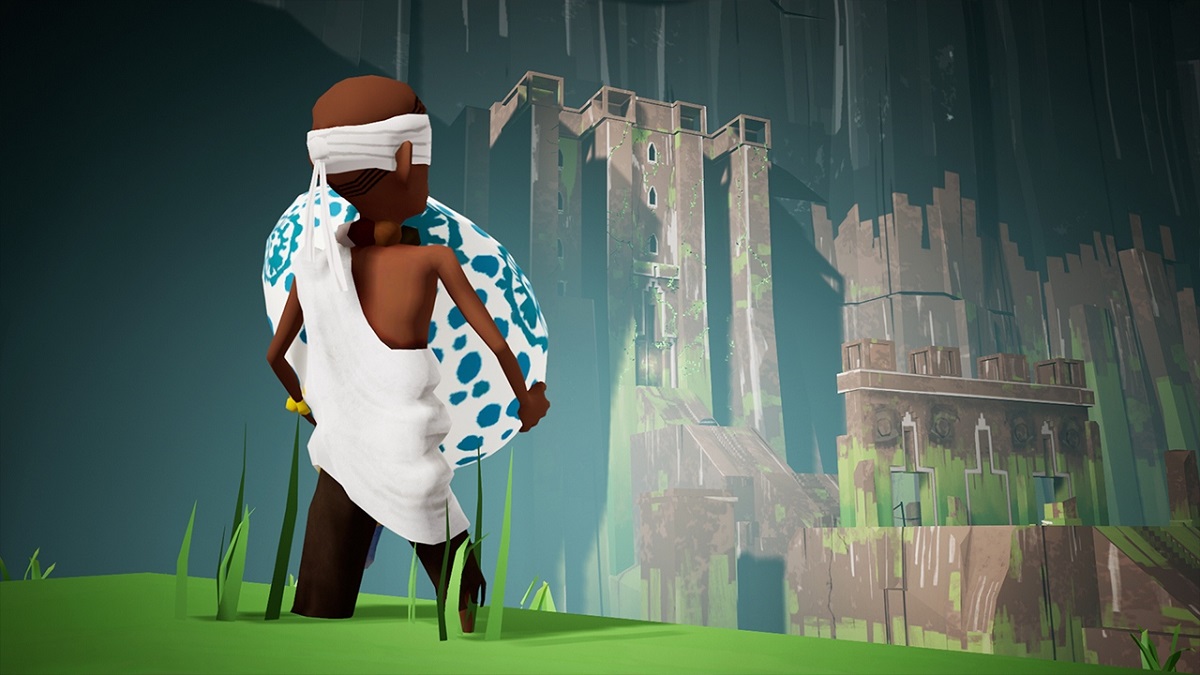 If there’s one well that games never seem to get tired of drinking from, it’s mythology. The fantastical stories of ancient gods and strange creatures are natural source material, and titles that don’t just focus on the action–like Assassin’s Creed Odyssey–can provide valuable glimpses at other ways of life. Parallel Studios‘ Eqqo is one of very few games based around Ethiopian mythology, and through its accessible light puzzle gameplay, it offers players of all ages a valuable peek into the wisdom and traditions of this unique culture.

Eqqo chronicles the journey of a young blind boy who’s been separated from his mother and is trying to survive while caring for a giant egg entrusted to him by a serpent god. His mother relies on divine narration to watch over her son’s expedition and protect him as best she can. As the player, you’ll act as the middle man between the two and guide Eqqo across a variety of perilous landscapes and tricky puzzle rooms along his roughly three-to-four-hour pilgrimage.

The journey is broken up into chapters, and each chapter is divided into bite-sized stages comprised of environmental puzzles. Somewhat reminiscent of Zack and Wiki: Quest for Barbaros’ Treasure (but far less intricate), you’ll have to guide Eqqo around the screen by touching the ground and objects around him. Some puzzles are more passive, like ringing a bell in different sequences to open a gate, whereas others require quick thinking due to either Eqqo or the egg being in imminent danger.

As he completes tasks and makes progress, his mother narrates everything from Eqqo’s inner thoughts to light-hearted conversations between him and the egg. This steady flow of simple interactivity and narration gives Eqqo a charming, almost storybook-like quality.

There’s no question about it: Eqqo was primarily made for a younger demographic, and it absolutely nails those design sensibilities. Every puzzle is split into easily digestible chunks, and solving each is intuitive enough that a parent should only have to step in every now and then when playing with their child. There’s also plenty to interact with on-screen, from throwable pots and stones laying around to wind chimes that echo beautifully when brushed over.

Most importantly, though, Eqqo teaches critical lessons about responsibility and facing one’s fears. Just like how teachers used to send elementary school kids home with an egg to care for, Eqqo literally has to carry and protect a giant egg for most of his adventure. His mother consistently offers words of reassurance, and he’s able to find it within himself to overcome both mystical enemies and more common fears like heights. There’s no shortage of good lessons here, and it’s all done with enough charm to never feel like an educational video game.

There’s a fun, relaxing time to be had here for players of all ages, but Eqqo stands out as an especially easy recommendation for parents looking to get their young children into gaming. It’s something you can enjoy playing together, and its puzzles are accessible enough for kids to get a great sense of accomplishment from solving them. With wonderful overarching themes of love and growth that carry through to the end, experiencing one of the less-referenced types of mythology has never been so inviting.