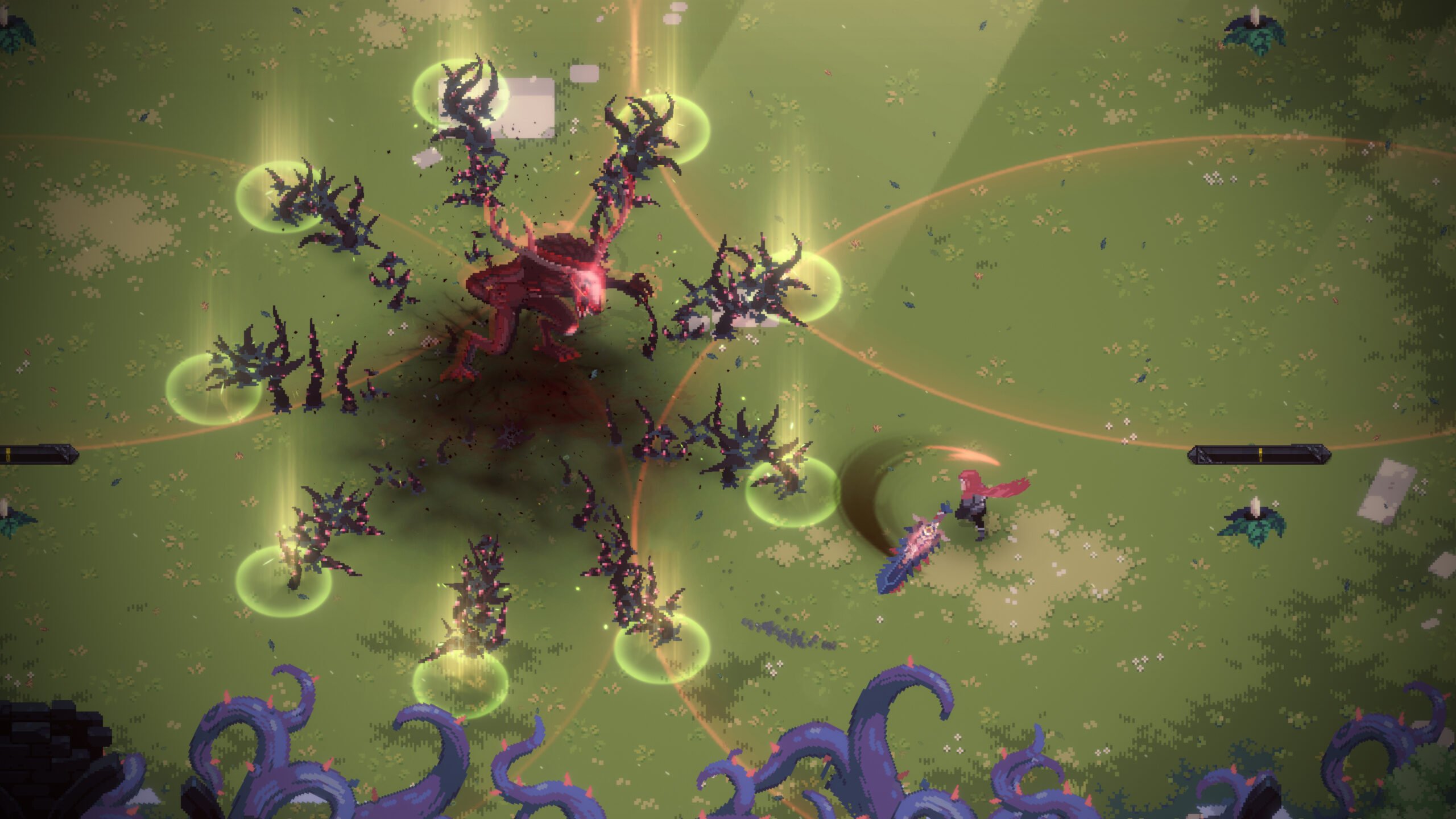 The recently-released Eldest Souls is a brutally difficult boss-rush game with deep and satisfying mechanics. While the combat is fast, fierce, and fun, Eldest Souls also has a soundtrack that is a cut above. Every single boss has its own memorable theme, and the powerful, drum-forward compositions feel designed to keep players engaged during every battle. Goomba Stomp was able to connect with Sergio Ronchetti, the composer of Eldest Souls, to talk about his inspirations and the collaborative work that went into the creation of this indie game’s soundscape.

(Please note that edits were made for both brevity and clarity within the following interview.)

Goomba Stomp: How much of Eldest Souls had you seen before you started composing for it? Was it more of a collaborative experience with your team members, or something more asynchronous?

Sergio Ronchetti: It ended up being suuuper collaborative. I applaud Jon [Constantini] and Francesco [Barsotti] for creating such a comfortable creative environment for us all. All artists need space and time to fail and experiment our way towards the solution. As I got more involved with the studio, our workflow ended up being very intimate, to the point where I could jump in on the game build at any point and mix my work live with Fmod.

GS: The main theme of Eldest Souls is soaring and elegiac, perfectly matching the epic story being told in the opening cutscene. It feels almost like a church hymn. What were some of your inspirations for this particular piece of music?

SR: I absolutely love this new wave of post-minimalist music, if that’s what you’d call it. The likes of Max Richter, Ryuichi Sakamoto‘s score to The Revenant and a lot of Olafur Arnalds. There are 2 messages that needed conveying in Eldest Souls: the first was the brutal, fast-paced combat with the Old Gods. The second was this idea of lonely hope that surrounds the protagonist you play as. I thought the Main Theme, being the only track in this style, would help tie the whole soundtrack together.

GS: Do you have any musical inspirations in general? In your twitter bio you mention that you’d love to score a God of War game some day, are there any Bear McCreary songs that especially impacted you?

SR: Absolutely. Consider it a boyhood dream of mine! [laughter] I’ve enjoyed all the music from Winifred Philip‘s in GoW1 to the latest instalment. McCreary‘s approach to his music was so simplistic yet powerful in many ways, which I really appreciate. You could really feel the whole weight of the franchise and Kratos’ past throughout the gameplay.

GS: Eldest Souls is a boss rush game, meaning that every single battle has an epic feel. Was it a challenge composing so many different boss themes back to back?

SR: Each boss had its own characters and attributes to pay homage to, so in many ways it was a challenge to have them be so different from the last. However, the fact that they were so different made it exciting and inspiring to create fresh ideas. Some came together so quickly. Others were less straightforward.

GS: Did you particularly enjoy making any specific songs or themes for Eldest Souls? Do you have a favorite part of the soundtrack?

SR: I relished every single minute of this project. We had a clear direction and stylistic decision-making process throughout, so it was just a question of executing it to the best of my ability, within the limitations of our scope and budget. The Main Theme was special because I got the chance to record live musicians which is every composer’s dream scenario! And then other tracks like Ov Fire And Water and Lunar Descending came out exactly how I intended them to be.

GS: The world of Eldest Souls is dark, violent, and bloody. But there are moments of levity, particularly surrounding NPCs, but those moments are mostly devoid of music. Were there any particular emotions you were hoping to evoke with the creation of this soundtrack?

SR: The player should be constantly reminded of their solitude and the desolation that has engulfed their path ahead. For this reason I agreed early on with the boys that there should only be music during combat. This works two-fold. When you hear music, you know it’s go-time and everything springs into action. And in-between you’re left to reflect on your recent victory. If you couldn’t already tell, we’re big fans of Dark Souls and Bloodborne! [laughter]

GS: How was your work process impacted by COVID, if at all?

SR: Trying to be as productive and as inspired was difficult. Very quickly I think we all learnt that things were just going to take longer to accomplish, and that was ok. We allowed ourselves the time to complete things without jeopardising our mental and physical health. It was difficult to recharge our batteries and rest during the lockdowns and accepting this was part of the solution.

GS: In addition to composing this beautiful soundtrack, you’re an expert Foley artist and sound designer. How much of those skills were you able to incorporate into the soundscape of Eldest Souls?

SR: Thank you for that compliment! Really Foley is such a fun process that it was effortless incorporating it into my sound design. I started by simply imitating what I saw others do and even started reading into how sound designers in the 1930s worked at the very start of sound in film. So for that reason you’ll hear bacon frying in the rain ambiences and my voice in pretty much everything, including all the NPCs and some of the boss vocals. I’d drive my partner crazy some days by obsessively walking around the flat, hitting things to see if I could use them in the game!

Eldest Souls from Fallen Flag Studio is available now on Nintendo Switch, the Xbox family of systems, PlayStation 4 and 5, and PC. Our review is available right here! You can listen to Sergio’s music on his website. A heartfelt Thank You is extended to Sergio for his candid and insightful responses.