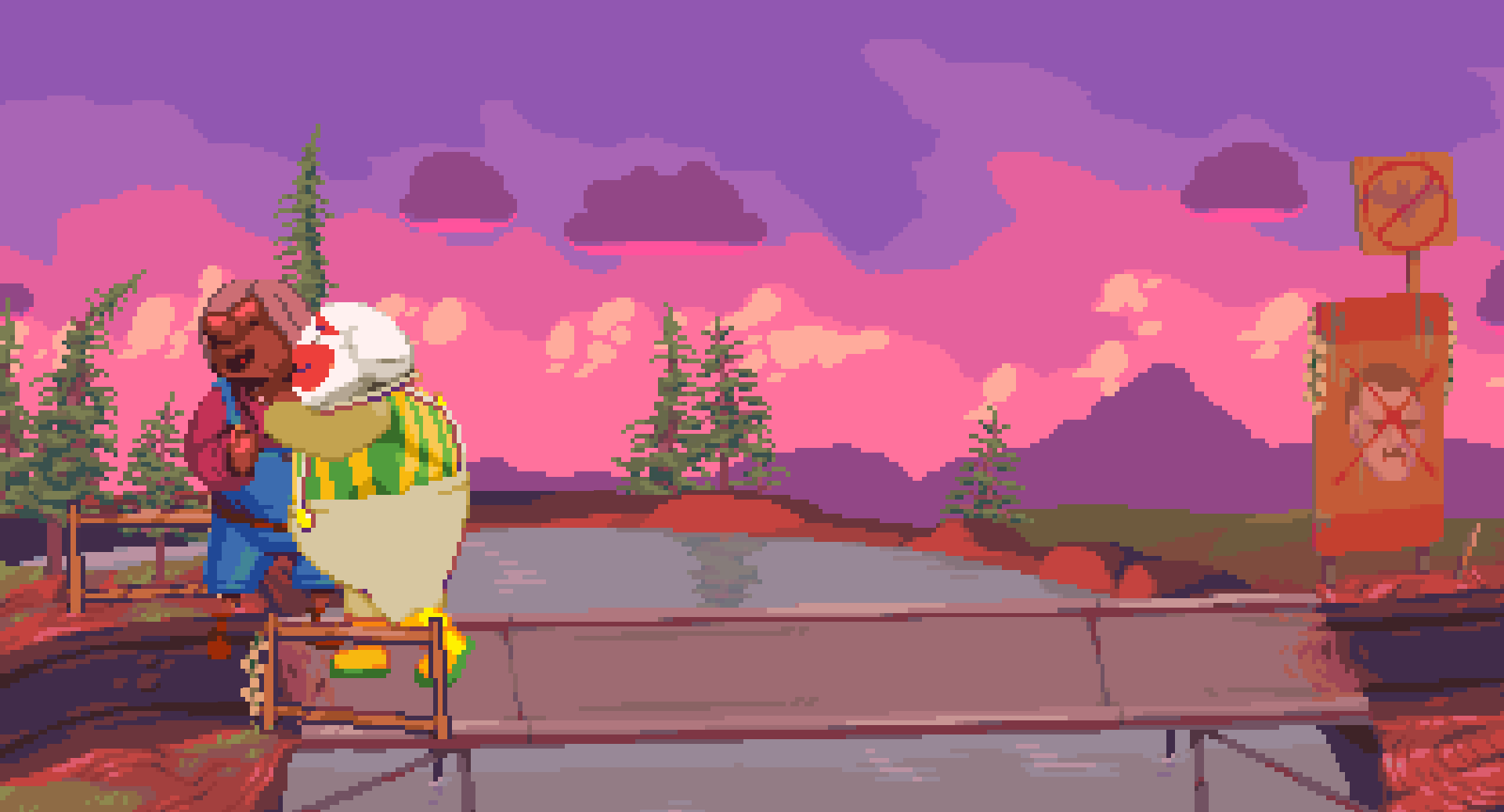 Love is scary, vague, and puzzling – at least in Dropsy. Developed by Tendershoot and A Jolly Corpse, this abstract take on the point-and-click adventure genre is simultaneously ominous and delightful. The gameplay and emotionally provocative soundtrack offer a heartwarming, sometimes bittersweet, experience when compared to its peers. With its high-quality pixel art style and psychedelic atmosphere, Dropsy is made for those who love old school adventure games but seek new styles within an old genre.

Dropsy is a loveable yet horrifying clown whose goal is simple: to hug people and make them happy. After a horrible incident involving a torched circus tent, the clown spreads his love and hugs on a detailed, surreal island in order to gain redemption for the incident. With the help from his adorable animal friends, he makes his way around the island solving puzzles and healing people’s emotional turmoil. While seeking redemption for the action he was blamed for, Dropsy and the player discover secrets about the world he inhabits and unearths his true past. 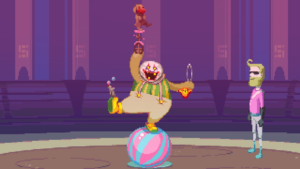 While it draws heavy inspiration from classic Lucasarts adventure games, Dropsy distinguishes itself by containing absolutely no dialogue or readable language. One of the many downfalls of a lot of adventure games is overbearing text or speech. Therefore, the missing dialogue is one of the strong selling points. There are only speech and thought bubbles with visual depictions of emotions each character is expressing. This differentiates the gameplay by forcing the player to decode exactly what NPCs are asking for. Although this is a creative and original idea, because each person playing will interpret the pictures differently, it can lead to miscommunication. It is difficult at times to understand what the game is trying to ask of the player.

Dropsy is a sandbox in terms of adventure and puzzle solving. There is no strict linear narrative, so the player can solve the puzzles in any particular order. The varied environment is fun to explore, ranging from a peaceful forest to a mysterious vampire-fearing cult refuge. The puzzles are mainly lock and key style, though there are a few others that stray from that type. The puzzles in the game are not particularly hard, though a walkthrough may be necessary since some items are obtuse and easy to miss. It can be difficult to find everything since some items blend in with the background. Consequently, the player may resort to slowly rolling their cursor across the screen. In order to understand everything effectively, one pretty much has to stay fully engaged, or information can be lost. It’s the type of game that needs to be played in one or two long sittings. Every puzzle eventually comes together, but the player must stay immersed at all times or information may be forgotten. This isn’t necessarily a bad thing, though it can get tiring when it turns out Dropsey and the gang have to remember or track down something they encountered two hours ago. 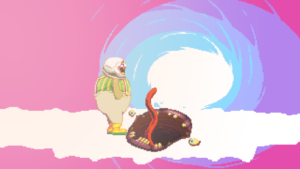 Where this game shines is the joy of discovery and development of the world. Dropsy is a grown man with an underdeveloped mind and has little or no knowledge of the world around him. The world develops from being grounded in reality, to an abstract and surrealist nightmare. Each character you hug is distinct and memorable. When you finally do get a chance to hug everyone and make them happy, it is infinitely honest and heart warming. The hug animation, in particular, evokes a feeling of warmth you don’t often find in gaming. However, where this game particularly doesn’t shine so much is the disjointed plot. The beginning of the game feels so defined and detailed, but as it progresses everything feels sort of tacked on or done for the sake of being bizarre without following through with what the story had originally set up.  It ultimately comes off feeling displaced and confusing. The ending is abrupt, blunt and leaves something to be desired. By the end, the story did not resolve and lost the emotional value that it was building up to.

Dropsy  effectively creates a sense of honest happiness that reminds players that everyone needs a hug sometimes. It contains moments that are creepy, surreal, honest and charming. This game collects everything endearing about simple adventure games and then proceeds to turn it on its head. Dropsy’s message is simple: not all problems can be solved with violence, sometimes they can just be solved with a hug.