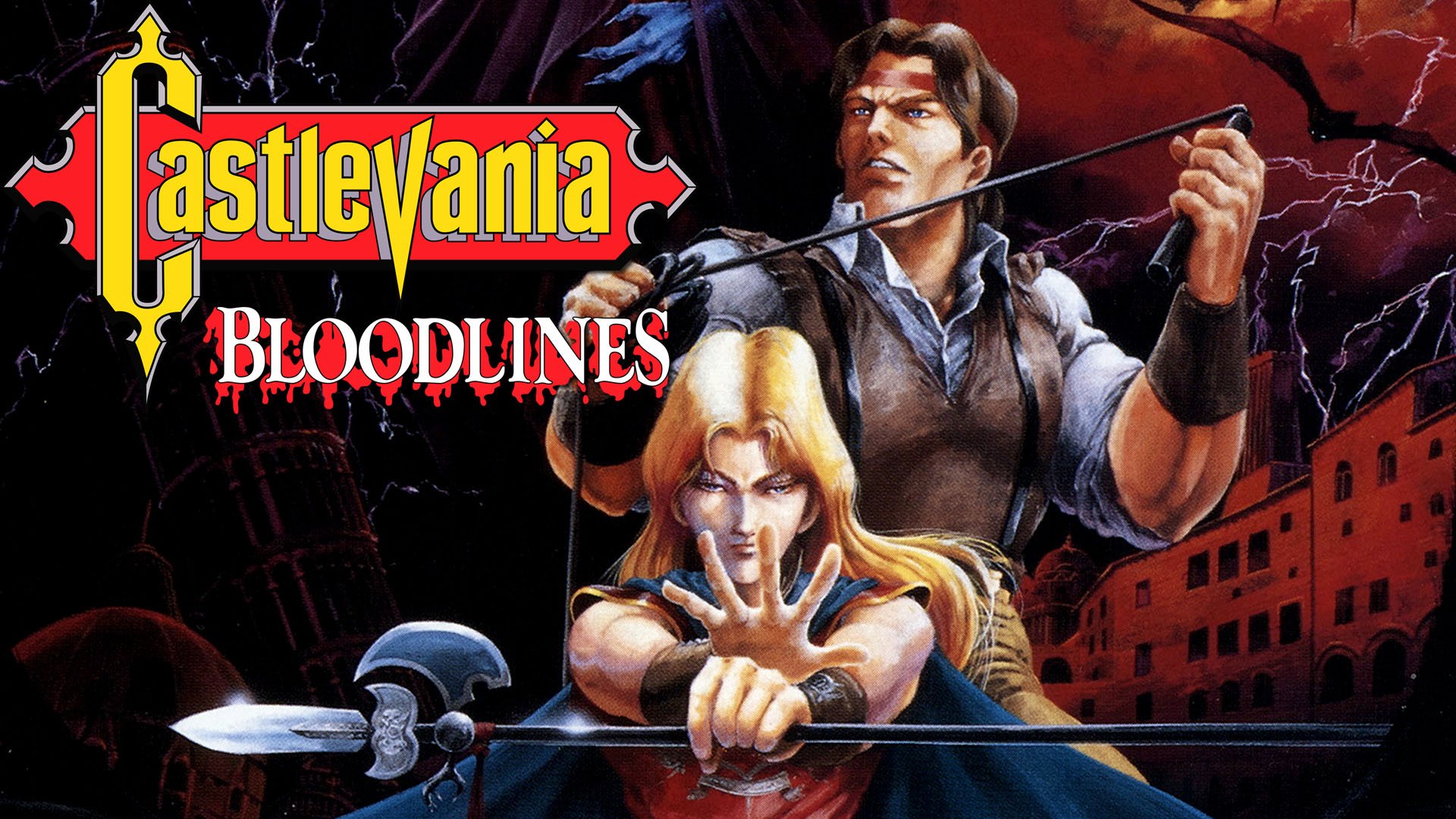 Castlevania isn’t a dialogue-heavy series by any means, but it’s still home to one of gaming’s most compelling narratives. Equipped with only their ancestral weapon, the legendary Vampire Killer, descendants of the Belmont clan face off against Count Dracula every 100 years like clockwork (give or take). His resurrection is inevitable. Just as good will always triumph over evil, evil will rise again. Castlevania was about the cyclical nature of good and evil long before Dracula mused about the nature of humanity in Symphony of the Night. Castlevania chronicled the Belmont family’s centuries-long struggle to keep Count Dracula at bay, game after game. Of course, he wasn’t the Count Dracula– more a representation of evil– but that was as much a given as a Belmont rising up to wield Vampire Killer. Then Castlevania Bloodlines happened.

Released in 1995 exclusively for the Sega Genesis, Bloodlines may have looked like any other Castlevania game, but it marked a series of eclectic firsts for the franchise. Gone are the Belmonts and the game neither takes place inside of or involves getting to Dracula’s Castle. Bloodlines is even titled Vampire Killer in Japan, creating a bigger divide between it and previous entries, but that hardly compares to Bloodlines’ strangest contribution to the series: making Bram Stoker’s Dracula canon.

The nature of how Dracula fits into the Castlevania mythos isn’t as plain and simple as just taking the book as writ as canon, but it fits much cleaner than one would expect. Although Bloodlines may lift elements from the novel with its own embellishments, its changes are ultimately inconsequential. Quincey Morris doesn’t have a son in the novel, but he’s the only major character alongside Dracula not to keep a journal, keeping his background relatively obscured. Quincey also doesn’t sport his signature bowie knife in Bloodlines’ backstory, finishing Dracula off with a stake (instead of the Vampire Killer for whatever reason.)

There’s no mention of Jonathan Harker, Mina, or Abraham Van Helsing– and Dracula’s motives aren’t at all in-line with his novel counterpart’s– but Konami’s references to the novel make it clear that audiences are intended to consider the novel canon even if the details don’t quite match up. It seems a strange choice, especially for a franchise that was pushing its tenth anniversary by the time Bloodlines released in 1995, but it’s not a totally random decision on Konami’s part. Much like how Super Castlevania IV’s tonal maturity gave it a greater layer of depth, Bloodlines thrives off its connection to Bram Stoker’s Dracula.

If there’s one immediate benefit to tying Dracula to Castlevania: Bloodlines, it’s grounding the latter in some semblance of reality. Set in 1917, Vampire Killer was the most modern Castlevania to date– not just at its release, but until Aria of Sorrow was released in 2003. The games were never period pieces, but they were set far enough in the past where literal Universal Monsters wouldn’t keep the series from staying narratively grounded. More importantly, the series’ settings were always consistently gothic, creating a unique sense of style around Dracula himself rather than the time period.

Bloodlines opts for a wildly different approach altogether when it comes to setting, doubling down on the series’ historical elements while keeping Super Castlevania IV’s darker tone intact. Dracula feels a part of the world, rather than the world of Castlevania feeling a part of Dracula. At the same time, Bram Stoker’s Dracula helps ground the very minimal plot by giving John and Eric’s trek across Europe greater scope. John and Eric even have a personal stake in the plot, having witnessed Quincey’s death. It’s all window dressing, but Bloodlines’ assimilation of Bram Stoker’s Dracula gives the series some narrative legitimacy to rub shoulders with its high quality gameplay.

The connections to Bram Stoker’s Dracula are admittedly loose, but they’re loose enough to work in the game’s benefit. Dracula is structured as an epistolary novel with chapters divided in letters, journal entries, articles, and logs. The story is told coherently, but this approach often results in the point of view & setting changing. While uncertainly a direct reference to the novel, Bloodlines similarly allows players to switch between John & Eric whenever they use a continue on Easy mode, and each stage takes place in a different country rather than just Transylvania.

Bram Stoker’s Dracula may give Bloodlines its foundation, but it’s that globetrotting that gives the game its identity. Stage 1 opens in Romania, the ruins of Dracula’s Castle left to time after his previous defeat. Where other games would immediately transition into the depths of Castle Dracula, Bloodlines’ Stage 2 instead takes players to the lost city of Atlantis in Greece, while Stage 3 involves scaling the Leaning Tower of Pisa in order to slay a demon at the top. There’s a grandiosity to the stage design simply not present in previous entries. Not just in terms of scope, but in actual structure.

Only six stages long, Bloodlines is the shortest of the mainline Castlevania games, but it makes up for its lack of length with longer stages overall. The main story falls on the shorter side, but the stage to stage pacing ensures that Bloodlines neither outstays its welcome or goes too soon. While a Stage 7 may have done the game some good, Bloodlines’ six stages offer some of the tightest action-platforming in the franchise. Enemies are by no means infrequent, and Bloodlines requires players to understand both John & Eric’s unique platforming skills by Stage 3, outright preventing progress should players fail to adapt.

John’s unique platforming ability will be familiar to all those who played Super Castlevania IV as, predictably, he can use the Vampire Killer to hang. This time around, however, John can whip onto just about any ceiling. Eric, on the other hand, has a charged jump that thrusts him into the air when released. Eric’s jump ignores platforms entirely, allowing him a degree of verticality Castlevania typically doesn’t give to players. Stage 3 even features a room that’s a bottomless pit for Eric, but easy platforming for John thanks to its whip. Subsequently, there’s a room where John can’t make progress due to the ceiling, but Eric can jump right through.

John and Eric’s abilities are natural extensions & evolutions of Simon’s from Super CV IV, just split between the both of them, but it’s also worth noting how Bloodlines’ more involved platforming helps to further flesh out Castlevania’s world. Bram Stoker’s Dracula coupled with the European setting did more for the series’ world-building at the time than any of its predecessors, save for Rondo of Blood. It’s not often that a video game series absorbs a literary classic into its main plot, but Castlevania handles it surprisingly well.

It’s fitting that Castlevania Bloodlines is titled Vampire Killer in Japan. At its core, Vampire Killer is a recontextualization of Castlevania. The story is still framed through the Belmonts’ struggle against Dracula, but the scope is wider, extending mediums in the process. Vampire Killer is about the legacy of the Vampire Killer and the vampire killers whose fates are sealed by the whip. Symphony of the Night may be a direct sequel to Rondo of Blood, but Bloodlines set the stage for Symphony to tell a traditional and intimate story.

More important than anything, though, Castlevania taking Bram Stoker’s Dracula and making it a part of its canon is just so outlandish that it makes perfect sense. The series that regularly featured Universal Monsters as bosses was never going to ignore the novel forever. That Bloodlines uses the novel tactfully and in a game where its presence is appropriate– intentional or otherwise– weirdly elevates Castlevania as a franchise. Castlevania isn’t just a Dracula story, it’s the Dracula story. And of all the games to make that declaration with, Bloodlines is a damn good choice.