Right, so since the dawn of the indie scene in the late 2000s, it’s become abundantly clear that the developers of indie games are not under the same restrictions that a typical gaming publisher might fall prey to. Take That Dragon, Cancer for example. The game released early last year and focused on a family’s (true) experience with a dying child. Not only that but the game had Christian overtones that were not subtle. Now did that stop it from being a good game? Not in the least, or not according to this writer, anyway (who happens to be non-Christian, if you must know).

We’re getting off topic though, because we’re not here to talk about That Dragon, Cancer, we’re here to talk about a game that you might find polarizing for another reason entirely. To just cut right to it, the reason this particular game might rub you the wrong way is down to the fact that it contains not only male nudity (the first case of that I can recall seeing in gaming, which is worth a mention) but also because it features child nudity. It’s called Shower With Your Dad Simulator, and it’s developed by marbenx.

You didn’t read that wrong, this game actually has naked boys in it. Now, granted they’re 8-bit, and animated in a way that could never resemble a real human but as someone who recalls the gaming controversies of the past, I can’t help but notice the media missed a real humdinger for sensationalism with this one. I mean, even outside of the gaming world, we all recall folks uniting in parks to have massive bonfires of recently purchased Harry Potter novels, don’t we? 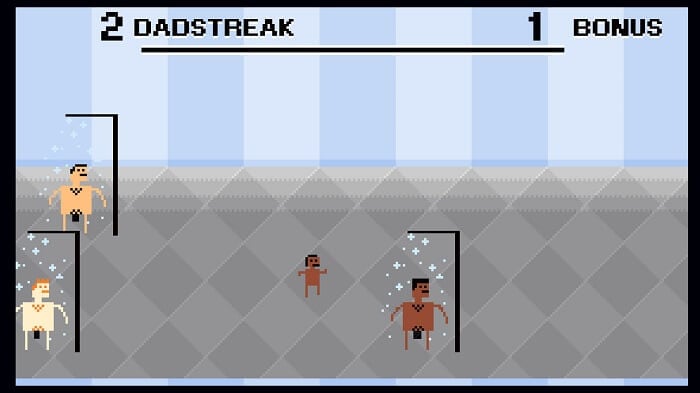 Don’t worry, I’ve only included censored images in this piece to avoid offending those of delicate sensibility.

Any sensible person knows that a main source of revenue for the media is selling the idea of a crisis, and somehow they missed this one completely. I mean, the concept is insane, even on paper.

Basically, to go by it’s proper title, Shower with Your Dad Simulator 2015: Do You Still Shower with Your Dad? is an absurdist work of brilliant proportions. It takes every single thing you could use to rile up the public and crams them all into one place. Naked men? Check. Naked men together? Double check. Naked men together, with an impressionable child running around? Jesus H Christ, that’s a bingo right there. 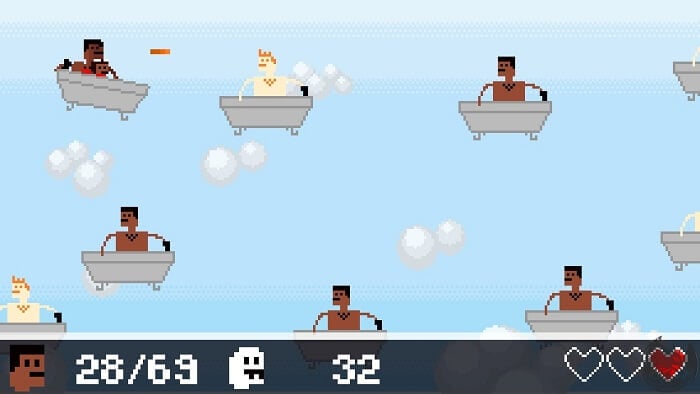 You’d better believe that there’s a dog-fighting mode in this game.

Anyway, controversy (or lack there of) aside, even with its intentional and ridiculous subtext, the game is, amazingly, somehow completely inoffensive. Is that why it hasn’t been covered, you might ask? Oh, come now, don’t give people that much credit–it’s simply that no one has heard of it. Despite having a small cult following on Steam, the game has skated under the radar of nearly everyone. You might notice that this article, for example, is being written in 2017, while the game has 2015 right there in the title.

So where, pray tell (writer’s assumption) did I hear about this, you might (hopefully) wonder? Well I first heard about the game via a little known podcast from the UK called Daft Souls (which, until very recently I assumed was defunct, happy to see they’re coming back). I couldn’t for the life of me believe that this game could possibly be real, so I looked it up the first chance I got. Sure enough, as you might have guessed, it does indeed exist. However, it wasn’t until recently that I suddenly stumbled upon it again and decided to see what it was all about.

So what is Shower with Your Dad Simulator? Well, it’s a silly little game where you, a child, have to wander into a public shower (the kind you might find at a local swimming pool, for example) and consistently pick your dad out of a group of dads. Depending on the mode, picking the wrong dad will either end the game or cause the player to be penalized…their score, that is.

To sweeten the deal players are even treated to terrible dad jokes in between rounds.

But if you think that that’s the extent of the ridiculousness on hand, you can hold your tongue. The game also includes a mode called Soapico (think the police corruption thriller Serpico), in which you play a hardened (please, just leave that alone) police officer who has to go around a shower room at the precinct and use point-and-click mechanics to figure out how to get the shower running. Now that has to be it, right? No, sorry to say that the game also includes a dog-fighting mode in which the child of your choosing must fly around in a bathtub and save his father from an evil empire of other dads. No, really.

Anyway, the point is, if you’ve got an hour of time to kill and a PC that can run Microsoft Word, you owe it to yourself to pick up this little gem for the paltry sum it costs and give it a go (it’s $1.09 in Canada). Or if you just want to see that this is actually a real thing, roll on over to YouTube, where I checked to confirm that it passes their restrictions.

As the bearded old codger, Jasper, once said on The Simpsons: what a time to be alive.

Sable on the PlayStation 5 Remains an Incredible Adventure