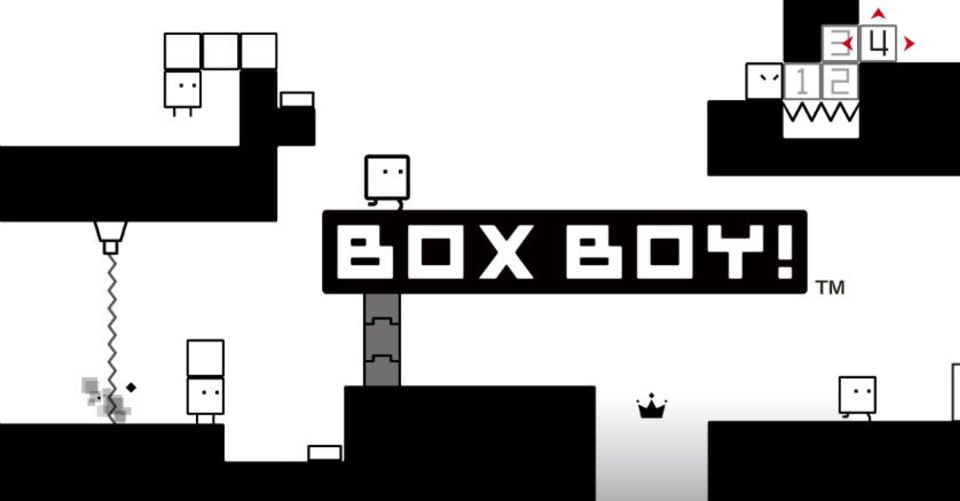 Their new 3DS eShop downloadable puzzle game, BOXBOY!, goes beyond the simple design of an iconic plumber or pink puffball to introduce a hero so one-dimensional he requires only four lines to draw. Because he’s a box. And maybe a boy. That bit remains unclear at the end of the six hours or so of bite-sized brain teasers, but what’s sure is that BOXBOY! is more proof that no matter what weird, possibly lazy idea the video game company’s creative minds come up with, the result is pure Nintendo magic, a package filled with the kind of cleverness and charm that hopefully marks the beginning of a new franchise.

Developed by HAL Laboratory, the creators of a pink puffball named Kirby, BOXBOY! takes the simple idea of creating boxes and utilizes it to present the player with multiple ways to solve nearly two hundred bite-sized puzzles filled with moving platforms, spiky pits, laser beams, and black ghost things. Can’t reach a switch that opens a door? Create a step platform made of boxes and drop it through a warp cloud so it comes out the other side in perfect position to hop right up. It’s as easy as that. But watch your box meter, because if it runs out, you won’t be able to collect the special crowns that will give you that perfect run. If this all sounds crazy and stupid, you haven’t played a Nintendo game in a while, have you? But BOXBOY!‘s mechanics are extremely satisfying, and like the best abilities, easy to learn but needing practice to master. With controls as precise as you’d expect from the company that brought you Mario, just running around in the little guy’s world is enough to entertain, but luckily there are plenty of things to do as well.

The levels contain a wide variety of tricks and traps to navigate your box through, and in what has become a Nintendo habit, constantly throw new ideas at the player only to abandon them a few stages later in favor of the next concept. This keeps the game feeling fresh all the way through to the end, an impressive feat given that all you do is make boxes. Puzzles gradually become more complex and difficult, but most players shouldn’t have a problem completing the main quest necessary to see the “story” end. Additional stages open up after the conclusion that offer more challenge and brain power if all crowns are to be nabbed, a feat that is sure to boost your ego just a little bit. On top of that, there is a shop where in-game currency (gained by beating levels) can be spent on time and score challenges, further extending BOXBOY!‘s lifespan. And the more puzzles solved, the more costumes will be available for your naked hero, so save those little square things and give your sentient carton a moustache, a knight’s helmet, or a fashionable cape to double the character’s pixels and his personality. Some costumes, like the highly recommended Ninja, even come with a few abilities, creating incentive for discovering and unlocking them all.

These cute, funky extras only contribute to BOXBOY!‘s pleasing aesthetic. The game has a clean, stark look that forgoes Nintendo bright colors for crisp black and white that perfectly encapsulates the innocence of a box boy in this crazy world. The straight lines and sharp edges are as far from Kirby as possible, but they are perfectly suited to the game’s theme of…boxes. It’s easy on the eyes and efficient in its detail, something that, in a puzzle atmosphere, helps keep the focus on the task at hand instead of on mesmerizing backgrounds. Unless you just stop to watch Boxboy. He’s adorable.

Available on Nintendo’s eShop, BOXBOY! is a great little downloadable along the vein of Pushmo, the kind I hope Nintendo keeps making. With a wide variety in puzzles and challenge, the game never wears out its welcome, entertaining the whole way through. It’s low price and charming vibe make it a no-brainer for any 3DS owner.