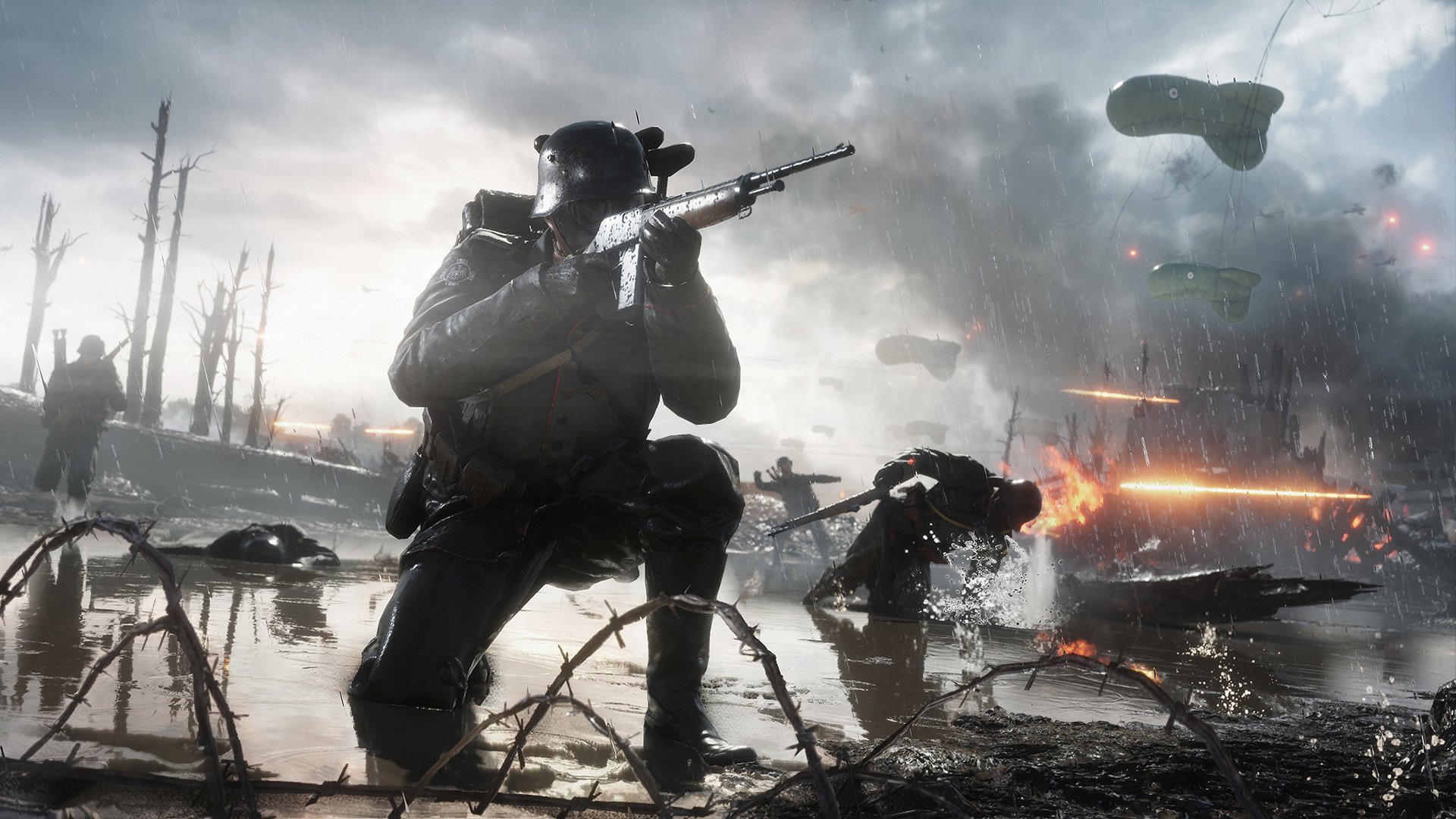 “We’ll all be cut to pieces by machine-gun fire cut before we can say ‘charge!’.”

Upon the announcement of Battlefield 1 – between the snide remarks about the title – players rejoiced, great merriment went forth into the streets (forums) about how it was the perfect breath of fresh air from the stagnation of military shooters. Perhaps the irony in that statement was lost on people, in the same way that it took going to the past to add a shot in the arm for the series’ future. In the aftermath, there was an abundance of scoffing at Call Of Duty so great that even Activision might have looked up from the money pile for a second before shrugging nonchalantly at Infinite Warfare preorder numbers. If this year has said anything (and oh boy has it, like how the UK is fu….n for all the family) it’s that hype should always be treated with second glances, then third glances and finally with a telescope when it’s not looking. Countless games this year have achieved little but to disappoint and coming toward the end of the year it was easy for every game to become a suspect (minus The Last Guardian, the game that’s bound to be heaven in a cheap plastic case) thus we come to Battlefield 1.

Yes, we’re about to start writing about the game you came here to read about, no we didn’t do this to annoy you. The games campaign was a much talked about thing running up to release, with many people praising its representation of the war. Maybe some people’s copies were laced with mad hallucinogenics (or opinions) but the level design and storytelling leaves a lot to be desired. This time instead of focusing on one character’s narrative through the war, we get 5 distinct arcs (plus an intro level), named War Stories. One tasks you as a tank driver, a plane pilot and another as a fighter alongside Lawrence of Arabia. The intro itself suggests that DICE will be attempting to show off the horrors and atrocities of the war but not once did the game offer any sort of insight, critique or social commentary on the events of the war – outside some text cards that offer rudimentary info such as ‘the war ended nothing’ or ‘the war ended a month later. The game, after all, is a first person shooter, so it’s understandable that the main form of interaction is to shoot people, but is that enough of an excuse?

A lot of things are remarkable about WWI, there’s so much material there to educate and connect people of a new generation to something they might not understand (this is no Blackadder Goes Forth). Instead, it’s just a rather baseline shooter – albeit a handsome one – with a skin deep acknowledge of the subject matter at hand. WWI presented a very different type of warfare but from playing this game it’s hard to differentiate it from other FPS games, trade out the weapons, settings, and vehicles for ones of the period, have a blimp instead of an AT-AT and call it a day. There’s little sense of grittiness, of trench warfare or of even a huge scale war going on, most of the levels centre -bizarrely- on lone gunning and stealth. In a world scale war. The games biggest failing is simply to play it safe when it could have easily had something of note to say. The developer’s intentions are good, but even the final message after finishing all the stories feels like a rather cheap segue into the games multiplayer.

Some time should be spent to talk about on the individual stories themselves, and the levels that accompany them. The overriding problem that plagues almost all of the war stories is how questionable the events often are and how they go for emotional impact when out of tone. For example one of the stories involves a hastily established father/son type bond, throws the protagonist into the role of the selfless hero as he slaughters hundreds of people defending their homeland, single-handedly, before hastily adding a line of text how the invading army lost in the end. Not that you’re shown the other side of the war, the ‘villains’ stay as the enemies despite how the war didn’t really have an overlying oppressive force. There’s no representation of the German side of the war or the Ottomans, neither is there any sign of the French or the Russians. Each story involves some form of heroism, of how one person could change the tide somehow, maybe it could have pulled them off but the writing and scripting aren’t even near to being able to achieve this. Unfortunately, each story is relatively short and therefore doesn’t have the time to invest you in the character’s plights.

Huge missed opportunities aside, the games level design has crippling flaws. One thing players might notice quite immediately is how a worrying amount of the missions are just multiplayer maps with bots, without any bespoke structure or scripting. Going so far as to not even attempt to hide the fact, one level plonks you into a multiplayer map and asks you to kill three people dotted on either side of the space. This is the type of level design often seen in a huge open world game but in a very short shooter, it feels like a shortcut that doesn’t paint the campaign as something that was hugely impassioned. The bigger issue being that they don’t make interesting or well-paced levels, considering they weren’t designed to be. It’s a blessing that the core mechanics and the shooting are so strong that some enjoyment can still be found. Frustrating moments, especially the last level which fails to convey to the player what exactly they’re expected to do, also leave a sour taste. Though the campaign doesn’t completely fail; it is a good stepping stone for hopefully better storytellers to jump from. As mentioned the game looks very stout from a technical standpoint, in addition to the oftentimes fantastic sweeping soundtrack that booms during the action and haunts in the quiet. Though it seems strange to spend so long talking about a mode that many consider just a footnote in a Battlefield game, it can’t just be written off when it’s one of the games selling points.

Overall the campaign is a rather lackluster experience that lacks many of the thrills seen present among its competitors. Oh right! The multiplayer is extremely strong, though. Hmm?