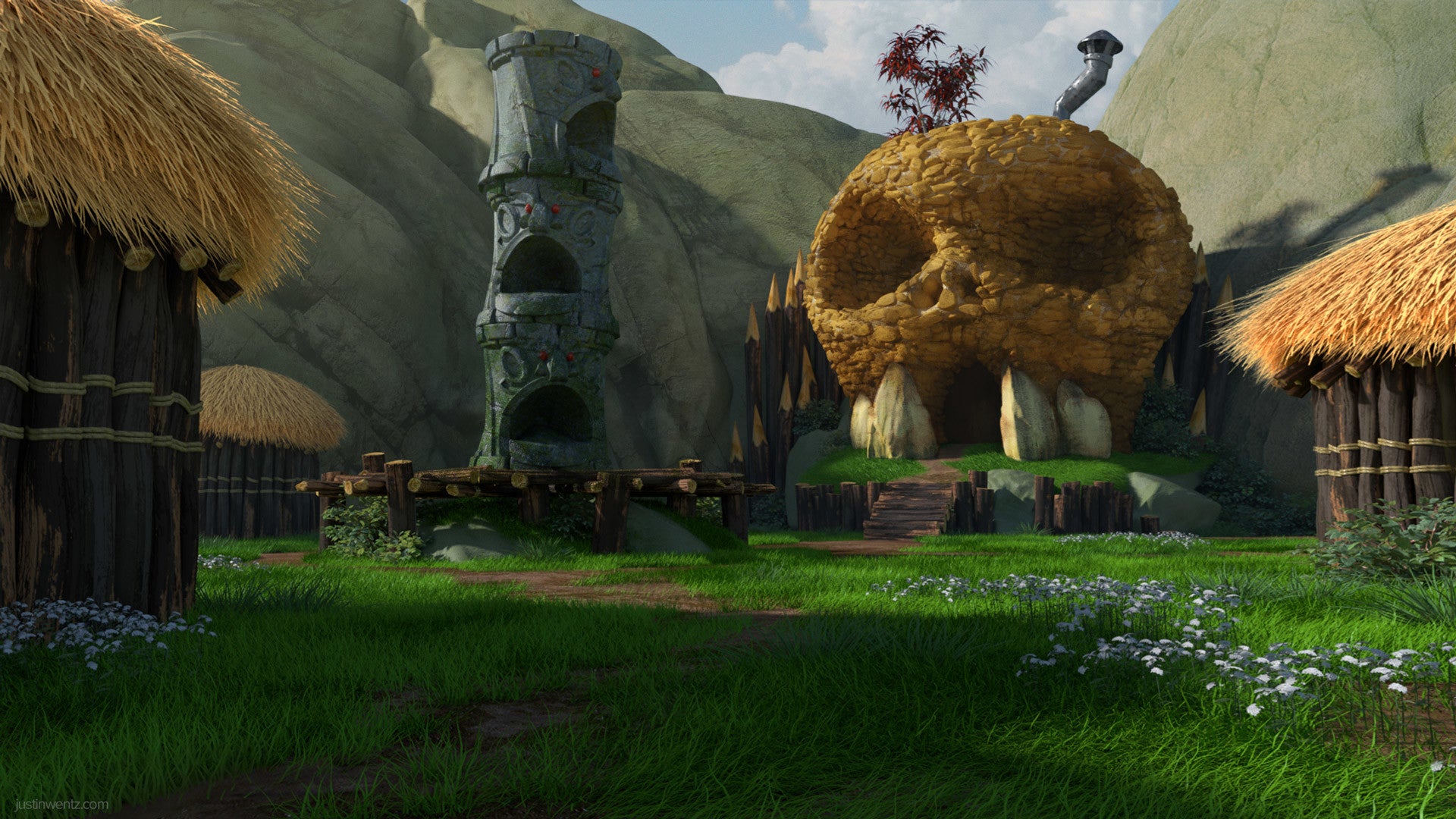 A paragon of collectathon design, Rare’s Banjo-Kazooie remains one of the most warmly regarded games in the Nintendo 64’s library. While many prefer Super Mario 64’s responsive controls and action-oriented gameplay, others believe Banjo-Kazooie’s emphasis on world-building and character represents the apex of early 3D platformers. But while Mario games continue to push platformers forward through refinement and innovation, Rare’s eccentric bear and bird have largely flown under the radar, leaving series devotees with little more than a blind hope of a grand return that isn’t Yooka-Laylee. Throughout this continuing feature, I will examine each of Banjo-Kazooie’s worlds, specifically focused on their design intricacies and philosophies. In this entry, I will be taking a look at the game’s first course, Mumbo’s Mountain.

Mumbo’s Mountain is a self-professed mountain divided into two levels. The lower level consists of the starting area, a small lake, and a region with apes and trees. Meanwhile, the top-level houses a termite nest, Mumbo’s Hut, and a totem pole. These two areas are separated by a long slope with several small plateaus and a pair of walkways. The course’s only unique interior is a tall termite nest featuring a path that spirals upward along the wall for three stories.

Mumbo’s Mountain’s primary concern is with continuing Spiral Mountain’s tutorial. While Spiral Mountain introduced Banjo’s core move-set, Mumbo’s Mountain teaches three slightly more advanced moves and introduces the player to the game’s myriad collectibles. It looks and feels like a prototypical “Stage 1” space of innocence a la Green Hill Zone or Mushroom Kingdom in its green pastures and docile wide-open spaces. But in straddling the line between a tutorial and a fully-fledged world it lacks the panache and intricacy of more specialized first courses, such as Bob-Omb Battlefield. Instead, it sequesters its challenges in well-defined spaces, leaving little room for creative play to help ensure the game’s mechanics are adequately communicated.

This piecemeal world design is a double-edged sword. Though it allows for a simpler comprehension of the course’s challenges and new techniques, it also underscores the course’s lack of theme, which in turn detracts from Banjo-Kazooie’s typically expert world-building. Oftentimes, the combining conceptually distinct areas makes for a mishmash of unrelated themes. For instance, one section of the map features the course’s only simians and two types of tree, while not far from there a bull lurks near a lake. This section feels thematically inconsistent with the rest of the course, seeming to channel a jungle as opposed to the rest of the lower level’s plains-like vibe and the upper deck’s tribal village. This area is internally inconsistent as well, featuring three animals types and two tree types with contrasting art styles and different real-world habitats. These paradoxical assets pull the course’s sense of place in multiple directions so that even this one small region lacks a clear identity. In this way, Mumbo’s Mountain’s “Spiral Mountain deluxe” approach molds a course that feels like a half-step away from something, but not in any particular direction.

It is also worth noting Mumbo’s Mountain is a mountain in name alone. Topographically, nothing about the course conveys a mountain. Instead, moving between the two levels feels like going between two floors of a large condo, clearly manmade and impersonal. This is unfortunate because topography can be compelling. The swathes of vacant space in Super Mario Odyssey’s Sand Kingdom, though often a slog to move through in practice, works because those spaces establish a desert setting. Meanwhile, Super Mario 64 contains a plethora of mountains, most of which relish the vertical gameplay opportunities and specialized set-pieces those different types of mountains can provide. Here, we have less a mountain than a single glorified slope.

Mumbo’s Mountain’s ten Jiggies can be generally divided into three types: stumble-upons, teachables, and skill-based. There are two outright teaching moments, meant to teach two of the course’s three new moves. Both are very straightforward, requiring minimal problem-solving or skill. Another three are placed out in the open, including an especially flagrant freebie right next to where the player learns Talon Trot. Here, the Jiggy should have been switched with a nearby Jingo to reward the player for using Talon Trot in a manner consistent with the two teachable Jiggies. The remaining five Jiggies require varying degrees of skill, with the most engrossing involving shooting eggs into a spinning totem pole’s mouth. The other four skill-based Jiggies all suffer from either being too facile to unrefined, including one task that demands the player fetch an orange from three seconds away and another that demands platforming in a termite nest marred by a misplaced static camera.

That termite nest is the primary justification for the course’s only transformation, the underwhelming termite. While one might imagine a termite allows Banjo to chew through wood or crawl through a tight space, it actually allows for navigating slopes too steep for the Talon Trot. This is ill-considered for two reasons. One, it proceduralizes a unique animal in a manner that is uncharacteristic of that creature. Two, the termite transformation allows the player to skip the Talon Trot technique they should be practicing while also obfuscating rules about which slopes are or are not climbable. Taken together, the termite transformation is not only disappointing but may detract from the course’s primary concern with teaching the game’s basics. The course would benefit from its removal, plain and simple.

For the most part, Mumbo’s Mountain succeeds at what it sets out to do. It teaches players some of the game’s more demanding central mechanics while demanding slight fluency in the most basic mechanics. In short, it eases players into the game, transitioning them from the structure of a harmless overworld tutorial into a paradigmatic stand-alone course. As a small space with minimal topographic variety and isolated challenges, it is especially easy to navigate and mentally map for first-time players.

On the flip side, these design choices are also partially responsible for the course’s lack of identity. Theming feels inconsistent, with a particularly uneasy selection of enemies (goblins, a bull, termites, an ape). Meanwhile, topography and architecture feel oversimplified, with the supposedly mountainesque course primarily defined by one course-long ridge that feels boring, teaches little, lacks personality, and doesn’t feel like a mountain. Finally, the map’s small size and lack of nuance force a deluge of collectibles that feel unearned and haphazardly placed.

Pros and cons considered taken together, Mumbo’s Mountain is a blase continuation of a tutorial that does what it sets out to do but little more. Lacking a cohesive identity and defined primarily by its ease, it serves as a welcome introduction for first-timers but feels skippable on subsequent playthroughs. It is remarkably typical of World 1 of its era, with nothing about it feeling especially unique. And those components that could help differentiate the course from the rest of the courses and Banjo-Kazooie from the rest of N64’s platformers, like the termite capture or the ape/monkey region, are underdeveloped and shallowly integrated.