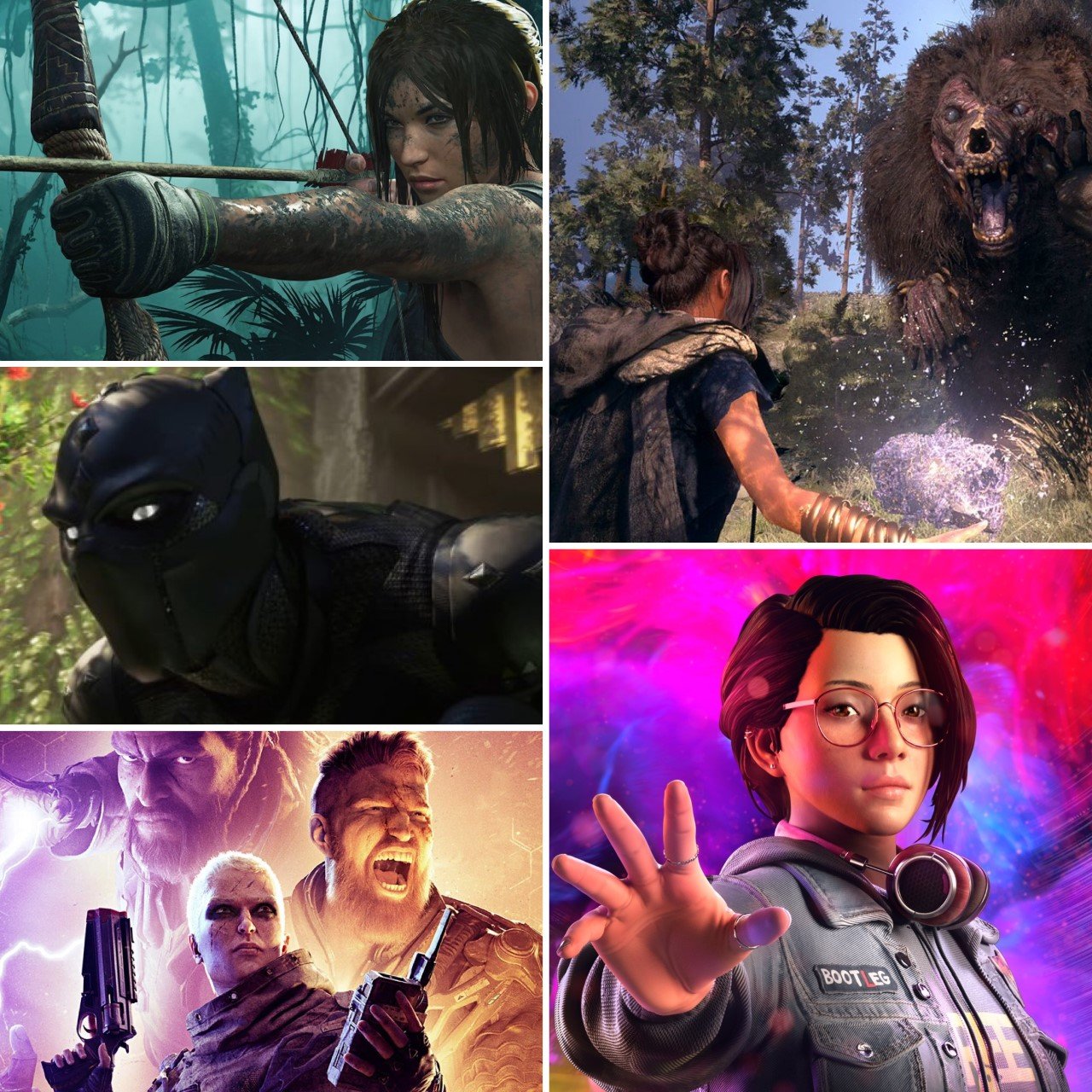 There were a fair few interesting reveals at today’s Square Enix: Presents, so let’s take a look at some of what we learnt from the showcase.

Marvel’s Avengers: Hawkeye is Here and Next Gen

It’s been a rocky road for Square Enix’s Marvel’s Avengers, which received criticism following its release last September due to its multiple glitches and boring gameplay. That being said, Crystal Dynamics have been working hard on updates to try to fix the issues (though some argue that their changes are focused in the entirely wrong place but that’s a discussion for another day). Square Enix revealed some upcoming new content for Marvel’s Avengers as well as a teaser for a long awaited character. The major focus here was the second post-launch operation for the game, “Operation: Hawkeye- Future Imperfect”. This operation sees Clint Barton a.k.a Hawkeye as the protagonist. The new operation is available now and follows up from the recent operation focused on Clint’s protégé Kate Bishop.

As well as this new operation, the game is also getting a Reassemble Campaign Replay- which fans have been asking for- which lets the player reset the game whilst maintaining their progress from their first play through. Basically a New Game Plus feature. There’s also a new customisable HARM Room, letting the player change their experiences against enemies by choosing their type, difficulty level and more.

Another big announcement for Marvel’s Avengers is that- as of today- players can now upgrade to the PlayStation 5 and the Xbox Series X/S versions for free if they already own the game. There was also an awesome teaser for a new Black Panther centric expansion: Black Panther: War for Wakanda which should be coming sometime this year.

Outriders is looking more and more interesting each time I see it and the new CG trailer and gameplay reveal at the showcase actually got me a little hyped. I loved the “Appreciate Power” trailer, which follows one of the monsters for a while before the protagonists cut it down.  I thought it was a cool and unique take on a trope of following characters during a trailer. I even felt a little sad when the flying bird creature that we were following got murdered by the good guys. Rest in Peace, skeleton bird thing. Outriders is looking to be a dark sci-fi RPG (I’m a sucker for RPG’s, not gonna lie) with plenty of potential for intriguing narratives. I think that Outriders kicked off the Square Enix: Presents showcase really well, offering something new and fresh in an industry where sequels, remasters and adaptations are everywhere. It’s also being developed by People Can Fly- who worked on Gears of War: Judgment and one of my favourite underrated games Bulletstorm– so we can rest assured that it is in safe hands. Make sure to watch the “This is Outriders 101” video above for the full scoop on the features the game is bringing to the table.

Outriders is due for release on the PlayStation 4, PlayStation 5, Xbox One, Xbox Series X/S, Xbox Game Pass, Steam, the Epic Store, GeForce NOW and Google Stadia on April 1st, 2021 with a free demo available now.

Although the news of a compilation of the three recent Tomb Raider games already leaked beforehand, there were still a few new announcements in regards to what Square Enix is planning for Lara Croft’s anniversary. Let’s start with that leaked one though. Tomb Raider: The Definitive Survivor Trilogy will include 2013’s Tomb Raider reboot and its sequels Rise of The Tomb Raider– from 2015- and Shadow of the Tomb Raider– from 2018- and all of the accompanying DLC.  Two more announcements that had already been revealed beforehand were an anime series based on Tomb Raider being developed by Netflix and Legendary as well as Lara’s inclusion in Fortnite, but it was revealed that Lara’s home- Croft Manor- will also be coming to Fortnite. Does anyone else feel like Fortnite is becoming the Super Smash Brothers of shooters? These crossovers are getting insane.

Lara will be making an appearance in other games too, with crossovers for Tom Clancy’s Ghost Recon: Break Point and Final Fantasy Brave Exvius in the works.  There’s also going to be news on the sequel to the recent Tomb Raider movies- starring Alicia Vikander as Lara- during the 25th anniversary celebrations, an awesome looking “Lost Valley” statue (it’s still in the works but is looking really cool) and a Tomb Raider themed cook book. In case you wanted to know how to properly cook a squirrel if you find yourself in a ship wreck or thrown off a cliff or something.

Not much is known about Forspoken– which went under the working title of Project Athia before its official name was revealed today- but we got a quick glimpse of it at the very end of the showcase. Actress Ella Balinska- best known for her role in the 2019 Charlies Angels reboot- revealed the footage as well as confirming that she will be voicing and performing motion capture for the games protagonist Frey Holland. There was a look at her character travelling through the game world with great speed and agility, which looks sure to be a prominent game play feature. Forspoken will be a PlayStation 5 exclusive. Make sure to head over to the official PlayStation blog to read more on what we know about Forspoken so far.

Forspoken is set for a 2022 release on the PlayStation 5.

And last but not least- my personal favourite announcement of the event- Life is Strange 3, which has been confirmed to be called Life is Strange: True Colours. Yes, that is how I am spelling colours. I am British damn it.  Deck Nine’s narrative based game Life is Strange became critically acclaimed after its release in 2015 for its brilliantly intertwined themes of real people and relationships combined with a supernatural element. Life is Strange 2 was just as affecting with its focus on family and how far you would be willing to go to protect your own (throwing that supernatural element into the equation again) and Life is Strange: True Colours looks set to follow a similar path. This time around the player takes on the role of Alex Chen, a young woman raised in the foster care system who is invited to the small town of Haven Springs by her brother who she hasn’t seen in eight years. He tragically dies in mysterious circumstances not long after their reunion and the game seems to be focusing on Alex trying to uncover the mystery of her brother’s death. In Life is Strange, the player could take control of Max’s ability to rewind time. In Life is Strange 2, it was the player character Sean’s little brother who had the supernatural abilities- which were telepathic powers- and your job was to teach him how to use and control his powers. This time around, the player character Alex has empath abilities. She can see and feel the emotions of those around her. The clips we saw how that could impact the gameplay. As the player controls Alex, you can see colourful auras around those in her presence, which change colour depending on their emotions. The feelings of others are able to infect her if there are too strong or volatile and can even cause a dangerous reaction if they overpower her. I’m guessing that learning how to control your abilities, carefully choosing whose emotions you wrangle with and how far you delve into them will all be important features of the narrative, in-game choices and the consequences of those choices.

There was also a look at the two romantic options in the games: Ryan- a burly, check shirted dude who is best friends with Alex’s brother Gabe- and Steph- a geeky musician who made her debut in the spin off game Life is Strange: Before the Storm (she is involved in one of the best moments in that game involving a table top RPG). I mean, Ryan is definitely cute (he kind of reminds me of a ginger, better dressed version of my boyfriend so I’m going to feel super weird if I don’t pick him) but Steph already has my heart from that Before the Storm moment. I’m already struggling with this one honestly.

Music looks set to be a key part of this game too, as it was with the other Life is Strange titles. Musician mxmtoon will providing the singing voice for Alex in the game (we get a look at her performing Radiohead’s “Creep” as Alex) who will also be involved in the soundtrack alongside Novo Amor as well as licensed songs from the aforementioned Radiohead, Gabrielle Aplin, Phoebe Bridgers and more.

The game is going to be released in September, but not in episodic form. It will be released all at once and I- for one- am so damn happy because those waits between episodes used to drive me to insanity. The other big Life is Strange reveal was the announcement of a remaster of the original Life is Strange alongside Life is Strange: Before The Storm. Heck yes. The remaster will feature enhanced graphics and animations. You’ll be able to get Life is Strange- Remastered Collection as a standalone game later in the autumn or as part of the Life is Strange: True Colours Ultimate Edition. Check out the official Life is Strange website here for more info on the different editions available for pre-order.

Life is Strange: True Colours is due for release on September 10th, 2021 for PlayStation 5, PlayStation 4, Xbox One, Xbox Series X/S, Steam, Windows and Google Stadia.