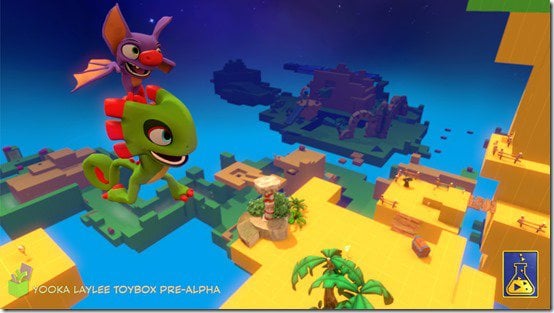 Since the disappointing release of Mighty No. 9 last month, there’s naturally been an increase in weariness over other crowd-funded games fueled by nostalgic properties. Fortunately, the veteran developers at Playtonic Games have calmed those fears by releasing their pre-alpha build [named “Toybox”] of Yooka-Laylee to backers of the project. While it’s clear that it’s still early in development and that there is work to be done, what’s been shown thus far is very promising both in terms of how the game already plays, as well as how it’s designed.

The first few moments are likely enough to revert those who grew up with Rareware’s N64 classics to a kid again, as the classic Banjo-Kazooie style yammering and text return and aptly set the mood. The lines said by your helpful robot guide [cheekily named “Inept”] display both the humor and character Rare games were known for. Though some of his lines may be a bit more self-referential and meta than liked, it’s still a welcome direction when compared with the self-shame on display in Banjo-Kazooie: Nuts and Bolts. There’s also sadly no dialogue shown for the titular characters in the Toybox, so it remains to be seen whether they will have the same great chemistry that the bear and breegull did. Controlling Yooka and Laylee felt both familiar and new at the same time. They have the classic moves to be expected from 3D platformers with various jumps, attacks, rolling, and a ground pound, but everything feels quicker and smoother. For instance, Yooka can hover in the air [thanks to Laylee’s tiny bat wings] much like in the original Banjo-Kazooie, but can now cross much greater distances. This was initially a concern as it might have made things too easy, but in practice, it allows the designers to set up trickier jumps than most seasoned players may be used to. It’s quite thrilling to see a ledge in the distance that would be impossible to reach in most platformers; only to take that leap and be rewarded with discovering a new section of the level.

In fact, that’s what’s most promising so far, even in this simplistic world with its basic colors and geometry, there’s still a lot of care and thought put into the various ways the player can accomplish their goals. The task at hand in the Toybox is to collect 100 quills [effectively the notes form Banjo-Kazooie] that are scattered across the level. Some are simply found on the main trail, while others are localized to certain sections that require the player to master a specific skill in order to access them. The player is thankfully free to go wherever they want, and can approach each task at their own pace. One structure, with a fair amount of quills inside, can be accessed both by swimming underwater to get behind its walls, or by using a nearby high point to leap onto the wall itself. The game is also refreshing in that it doesn’t feel the need to tell the player what to do and how to do it. Apart from Inept quickly highlighting the controls, you are given no hints, nor any objective markers to guide you. This makes collecting all 100 quills challenging, but gratifying once achieved. The developers even went about hiding other Easter eggs and secrets in the demo such that it truly feels like you’re always on the brink of discovery. That’s an impressive feat for an alpha-build version of a game.

That said, as it’s still an unfinished game, there are still some issues that need to be addressed. While all the movement does flow beautifully on land, things get disappointingly sluggish underwater. Yooka and Laylee swim relatively slowly, and thus far, do not have an extensive amount of moves that can be performed in deep waters to make these sections less dull. The physics engine also needs some work. There was a relatively simple section involving pushing a ball up a hill that provided far more difficulty than needed as it was tough to get in the exact position that would move it upwards. Objects in the world don’t seem to have much weight, and at this point, there’s no animation to indicate whether you’re pushing anything or not, so it’s hard to grasp whether what you’re doing is effective or not. As for other technical issues, while the camera is mostly solid, it can get caught up on corners, particularly when moving quickly with the speedy, but unwieldy roll mechanic.

Finally, while it’s refreshing that the game doesn’t seem to beat you over the head with what to do, it can be a bit unfair at times. The very last task of the demo involves Inept quickly flashing a picture of a location on the level where the final secret is hidden. It’s not a visually memorable location, and there’s no way to have him present the clue again if you missed it. Perhaps it’s because they wanted this particular secret to remain well hidden, but it still seems like an oversight. All in all, though it remains to be seen whether Yooka-Laylee will indeed meet its release date of early next year, the potential on display thus far suggests it will be well worth the wait.

Ever since I could remember, people have told me I should become a writer. I had no training unfortunately, so I did the sensible thing and secluded myself in various hotel rooms with only a typewriter to keep me company. I came out of that experience with a permanent case of disheveled hair, bloodshot eyes and an overall 50% decrease in sanity, and still never managed to type a single word. I still haven't fully recovered, but I now fit in too well with everybody in my MFA class, so I have to keep the charade going...