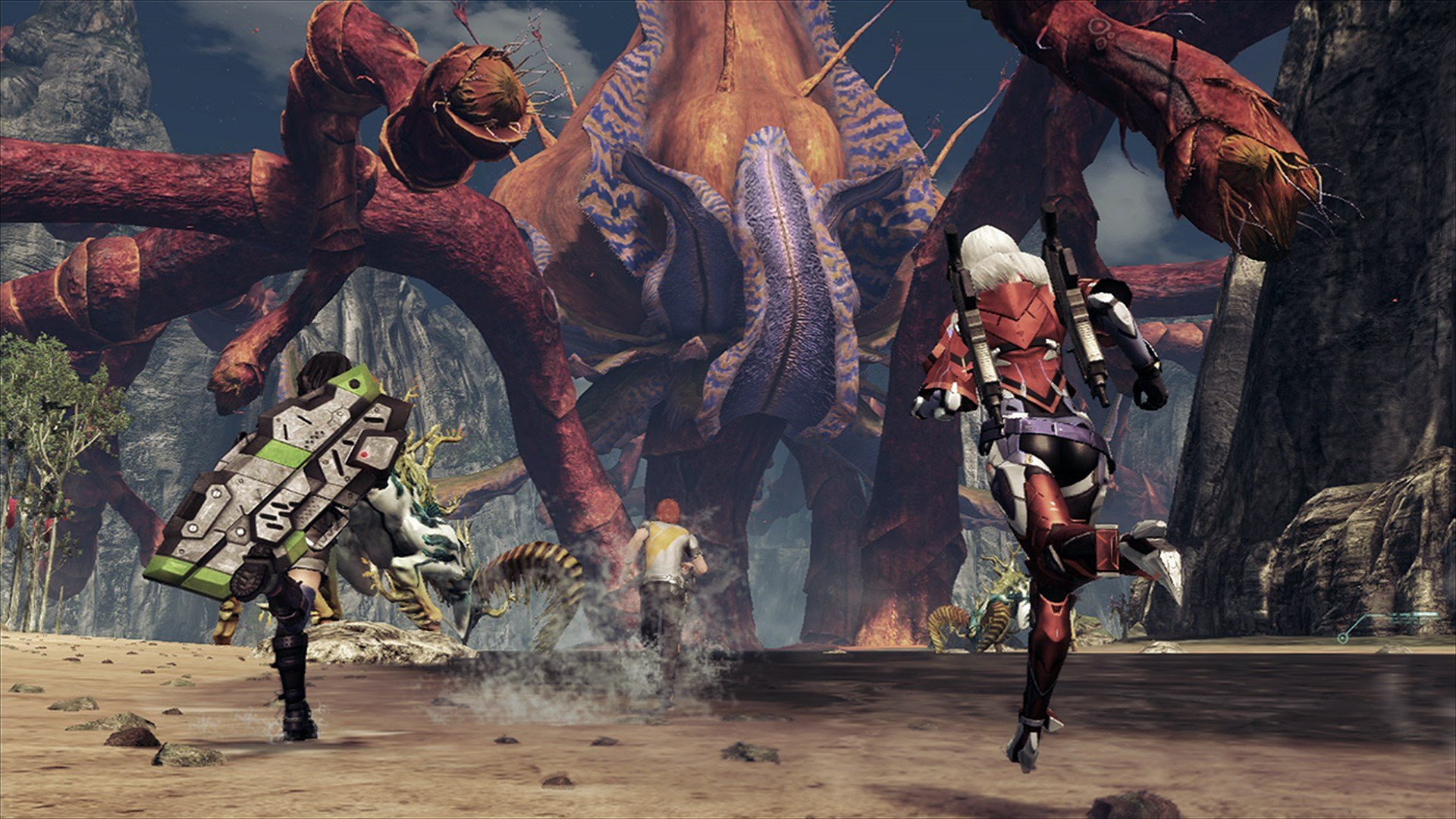 When Xenoblade Chronicles first arrived on the scene, it was one of the biggest surprises of 2012. A JRPG at heart, Xenoblade broke the mold by injecting the stale formula with the more modern trappings of an MMO, creating a best of both worlds scenario that played to a wide swath of gamers. The fact that it appeared as a gigantic RPG on the, by then, starving Wii console, certainly helped matters, and in the end Xenoblade emerged as one of the sleeper hits of the generation.

Cut to three years later, and at long last we have the long awaited sequel, Xenoblade Chronicles X. How has it delivered on the success of its lauded predecessor you ask? Well, that’s a tough question to answer. In fact XCX might be one of the most carelessly mixed bags in terms of quality to grace consoles this year, which is saying quite a lot after the way Batman Arkham Knight, Metal Gear Solid V, and a host of others managed to divide gamers in 2015.

On the one hand, Xenoblade Chronicles X offers more of exactly what everyone wanted from a Xenoblade sequel: an even bigger open world, even more quests to tackle, and a better fleshed out yet still addictive battle system. It also added mechs to the equation, a long-standing part of the extended Xeno-universe which makes a welcome return here (more on that later). But what about the cost of hammering such a staggering amount of content into a single game on the Wii U? Unfortunately, it isn’t pretty. XCX has a laundry list of problems, and some of them are big ones. The first, and most noticeable, of those is in the plot department. Joining Xenogears, Xenosaga, and the original Xenoblade, XCX had pretty big shoes to fill in that department, and so far it is lagging hard behind its forebears. Full disclosure, I’m only about two thirds of the way through, but by this point in any of the other five games in this series, players were all in on an epic and involving quest. Not so this time around.

Instead of the religious and philisophical debates of Xenosaga, or even the man vs. machine dynamics of Xenoblade, a war which was fought on the living bodies of literally titanic Gods, we have a standard sci-fi story of humans settling on a new planet. The cast is made up entirely of Americans, anime stereotypes though they might be, while the aliens are just the standard run of the mill sci-fi tropes. In a game this big, that’s a problem. If you want players to invest hundreds of hours of time into your world, you’d better give them a world they care about and characters they want to spend time with, which brings us to the next problem with this game—because wow these characters are bad.

Let’s start with the two worst offenders: Tatsu and Lin. Tatsu is a Nopon, a race we first met in the original Xenoblade, and if you thought these cartoonish nincompoops were obnoxious three years ago, get ready to double down on that. Meanwhile, Lin is a 13 year old girl (?!?) as revealed a few hours after you meet her, who happens to be a genius scientist and master chef. Okay so I’ll just get to it, are you ready, here’s the joke: Lin wants to eat Tatsu. Funny right? No? Not even a little? Okay then, get ready to hear that same joke whether you like it or not for the next 200 hours. Before missions, after battles, in cut scenes, text dialogue exchanges and on and on it goes. If you were playing a drinking game where you had to take a shot every time you heard that joke over a three hour session, you’d find yourself in a ditch or in the hospital. Combat takes some getting used to but is ultimately pretty rewarding. Also, the creature design is ace.

Now, there are less irritating characters in the cast, though at least a couple of the others fall into this category of absurdity (I’m looking at you L), so the obvious solution would be to just swap these characters out for ones you like right? Well, you’d think so, but that’s because you’ve been playing games since the 90’s right? Ya know, back when this idea first popped up. Well, too bad loser, because any quest that has cut scenes, character interactions, or any bearing on the story requires the same three characters. Two of them I mentioned above, and the third is the most stoic character in the game, Elma. Who’s the fourth member of the party? Well, that’s you, but unfortunately you’re basically Link this time around, so don’t expect to say much. Fancy switching characters up anyway? Get ready to smash your head against the wall.

Xenoblade Chronicles X has 21 playable characters including your custom avatar, but if you want to switch out, you’re going to have to go and find them. You read that right- you have to go look for a character if you want to take them on a quest with you. Need a specific character to accomplish something? Just look down at the overwhelmingly large map of New Los Angeles, a huge hub made up of six areas where your 20 companions are just scattered about with nothing special to differentiate them from the other icons on the map.

Maybe you recall a game called Chrono Cross; it was the sequel to Chrono Trigger and remains one of the best RPGs of all time. That game had a staggering 40+ playable characters in a quest that was only as long as that. Sounds crazy right? Hold on. It also had a weird system that allowed you to access all of them from the pause menu and swap them out at will. What sorcery is this!? Bear in mind this game came out 15 years ago. Start tying the noose, because this little idiot is with you for the next 100 hours or so.

One could go on all day about the design flaws in this game, really. Xenoblade Chronicles X promises you mechs from the start, but it forces you to play for 30-40 hours before you can finally get one. There’s no percentage counter or completion ratio for its ridiculous amount of quests so you have no idea how far you are along in completing the game. The main story is incredibly short in the grand scheme of things and seems to have little bearing on the world whatsoever. The cut scenes are static and the voice acting is uninvolving; just a lot of talking heads and ‘pan the camera wherever you want’ type scenarios.

There’s also way, way, WAY too much to do. Playing Xenoblade Chronicles X is like running a small business in terms of micromanagement, and even the most stalwart of players will be overwhelmed almost immediately. May the Mechonis help you if you’re an OCD completionist, because this game will make your eyes bleed.

Get ready: there are five continents, hundreds of destinations, over 700 achievements, dozens of affinity quests, hundreds of square miles to thoroughly explore, data mining probes, mech management and maintenance, art and skill upgrades, soul voices to swap out, characters to mix and match, and much much, more. Now to be fair, some of these things are optional to a certain degree, but the sheer volume of information and responsibility that is thrown at you over the first 10-20 hours is daunting to say the least, and it only gets more overwhelming as the game continues on.

The long and short of all of this makes for a clear and obvious shorthand: Xenoblade Chronicles X is a game with a lot of problems, but what might surprise you, if you haven’t played it yet that is, is that this also might be one of the best games released this year. If that sounds like a sort of riddle or conundrum to you than you’re not alone—rarely have I found myself so conflicted with a game as this. Whatever you think of the whole package, these mech battles are pretty amazing,

Cresting the 50 hour mark, I have no plans on abandoning this title, even with the bevy of great games released over the last year that I still have yet to catch up on. The reason for this is that even with its mountain of problems, XCX is still a very compelling and magnificent experience when it works. Exploring living, breathing ecosystems made up of predators and prey, with creatures that range from the size of a small bird to the size of a brontosaurus, is intensely involving and leaves the player filled with excitement as they wonder what new creature, docile or deadly, is waiting around every corner.

The same can be said for the environments. As I mentioned before, this game is staggering in its size and scope, and that means there’s a lot to take in on the visual spectrum. Roaring waterfalls that go on for miles, a giant series of rings balanced impossibly against the horizon, an alien set of moons and stars that change and blend in seamlessly with the scenery, and tree roots so large that you can walk up them as if they were stairways. There’s a lot to love here; it’s just too bad that its so frequently held back by XCXs many problems.

So, is Xenoblade Chronicles X a game that you should play? Well, if you had a lot of love for the original, than the answer is probably yes, but in an age with so many huge games, and many of them much more well refined than this, the game becomes a tougher sell. If you like JRPGs and the Wii U is your console of choice, than the answer is a resounding but slightly hesitant yes. You’re going to need to have a pretty big tolerance for JRPG bullshit to get through this journey.

Playing this game is like watching the kind of television show where you’re on the edge of your seat one minute, and rolling your eyes a few minutes later. For me, that puts it in a similar neck of the woods as say, Dexter, Smallville, Heroes, or The Walking Dead. Sometimes you’ll love it, other times you’ll wonder what the hell you’re still doing here. As with that comparison, there are going to be rewarding moments for those who stick through the lower points, but, to keep with the analogy, don’t expect this to be your Breaking Bad or Game of Thrones. A show like Supernatural is still going and will continue until 2018 at this rate, but that doesn’t mean most of us are still going to be with it by then.