This isn’t how the Nintendo Wii U’s tale was supposed to end. By finishing as the fourth-worst-selling console (13.56 million units sold) from the four major console developers (e.g. Microsoft, Nintendo, SEGA, and Sony) in over thirty years, ahead of only three SEGA consoles: the SGS-1000 (2 million), the Saturn (9.26 million), and the Dreamcast (9.13 million), it cast a pallid shadow over Nintendo’s fortunes in the early and mid-2010s, overwhelming the relative success of the Wii and 3DS and sending the company toward heavy financial losses and a reduced place in the gaming industry.

Since its effective dismissal with the release of The Legend of Zelda: Breath of the Wild on both Wii U and Switch, the Wii U has remained an aberration within Nintendo’s history, a wildly ineffective console that sank harder than any that Nintendo has put the entirety of its weight behind (i.e. not Gunpei Yokoi’s unfortunate Virtual Boy). Understanding how, and why, this console failed so spectacularly and, yet was the onus for some of Nintendo’s greatest games, is more difficult than, on the surface, it initially appears. 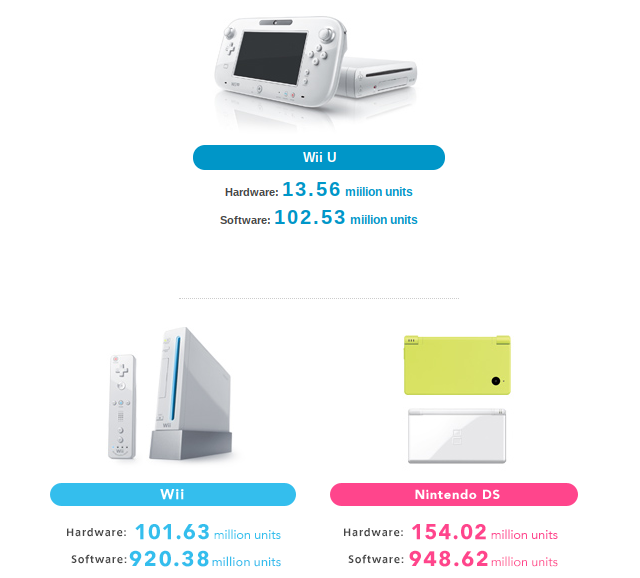 These numbers help put into perspective how truly terrible the Wii U’s lifetime sales were.

The success that Nintendo met with the Wii in the mid-to-late 2000s was the result of a strategy that focused on producing cheap, accessible games that could be played by non-gamers and hardcore gamers alike. The results were games like Wii Sports, Wii Play, and Mario Kart Wii, all of which sold tremendously well, cementing the Wii as the center of many casual gaming experiences. This “casual connection” filled Nintendo’s coffers with cash, but also diverted their resources from producing experiences for core players. As a result, Nintendo began to tailor their games to this casual audience, not only creating backlash amongst more hardcore players, but also eroding the already limited credibility that they had with their foundation players.

Nintendo sought to address this issue with the release of their next console. Dubbed “Project Cafe” or the “Wii 2” in games media, the Wii’s successor was supposed to focus in on providing access for multiple points of view within a single experience. Rumors placed the system at around the same power envelope of the PS3 and Xbox 360 which, by this time, were nearing their fifth and sixth anniversaries, respectively. Rumors had it that the controllers, themselves, would include screens, a rumor which set the stage for a wide variety of fake leaks and an intonation that Nintendo would possibly name its new system the “Stream.” At E3 2011, Nintendo finally took the wraps off of their new console. 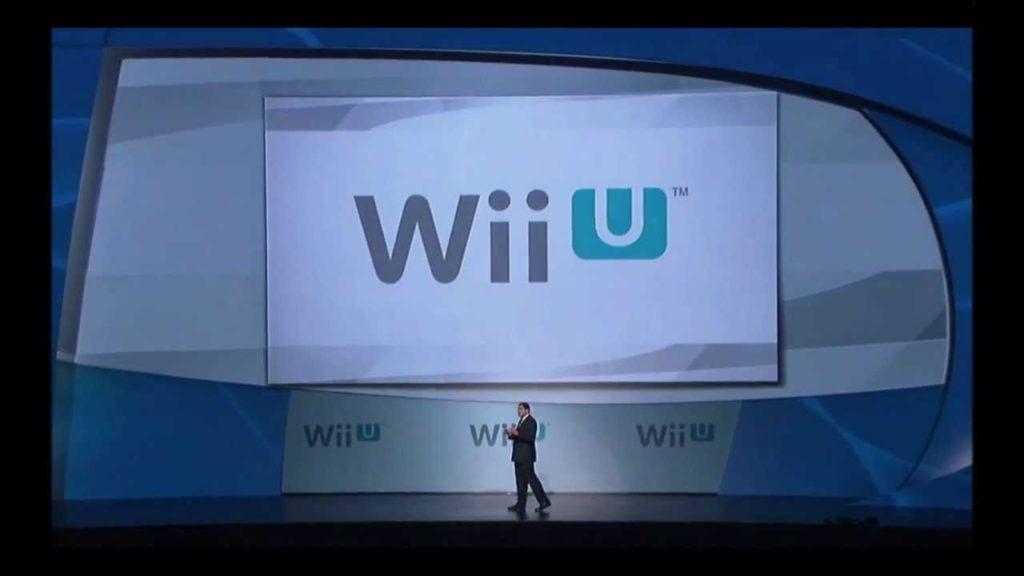 The Wii U’s announcement at E3 2011 was, in hindsight, an unmitigated disaster.

The issues became apparent almost immediately. When announcing the Wii U, Nintendo chose to focus the reveal trailer almost completely on their new controller, the GamePad, emphasizing all the amazing things that could be done with the “new controller.” By featuring the console itself very little within the announcement trailer,  showing games that, for the most part, looked the same as their Wii counterparts (such as New Super Mario Bros. and Wii Sports), and naming the console “Wii U,” a derivative naming scheme not seen before, or since, on a Nintendo home console, Nintendo sowed the seeds of confusion for their casual-heavy audience. However, things only went down from there.

An anemic launch lineup, headlining with the third New Super Mario Bros. game in four years, depressed launch sales. Selling 200,000 less units than the Wii during launch week in the United States, the Wii U started off fast, but soon accelerated in the wrong direction. After selling around three million units in its first three months, the Wii U would struggle to sell ten million more units in the last four years of its life.

Some of that trouble would come from a not-too-surprising lack of third party support. Despite launching with support from the likes of Activision, EA, 2K Games, and Ubisoft, the Wii U struggled to gain any sort of momentum after launch. Sensing poor sales, third parties jumped off of the Wii U, with EA abandoning the console less than a year after its launch, and Activision and Ubisoft jumping off in 2014. With the release of the PS4 and Xbox One in late 2013, many third parties quickly abandoned the Wii U, intending on making one, next-gen version of their games, instead of developing a separate version for the Wii U. The lack of third party support contributed to a lack of sales and the lack of sales contributed to a lack of third party support, quickly submerging the Wii U in a negative down-spiral from which it would never emerge. Soon, the Wii U was barely treading water and even perennial multi-million hits like Mario Kart and Super Smash Bros. couldn’t break the Wii U into anything less than unqualified failure. In the end, even the Wii U’s top ten best-selling titles sold less than half the number of copies of Nintendo’s best-selling Wii game, Wii Sports. 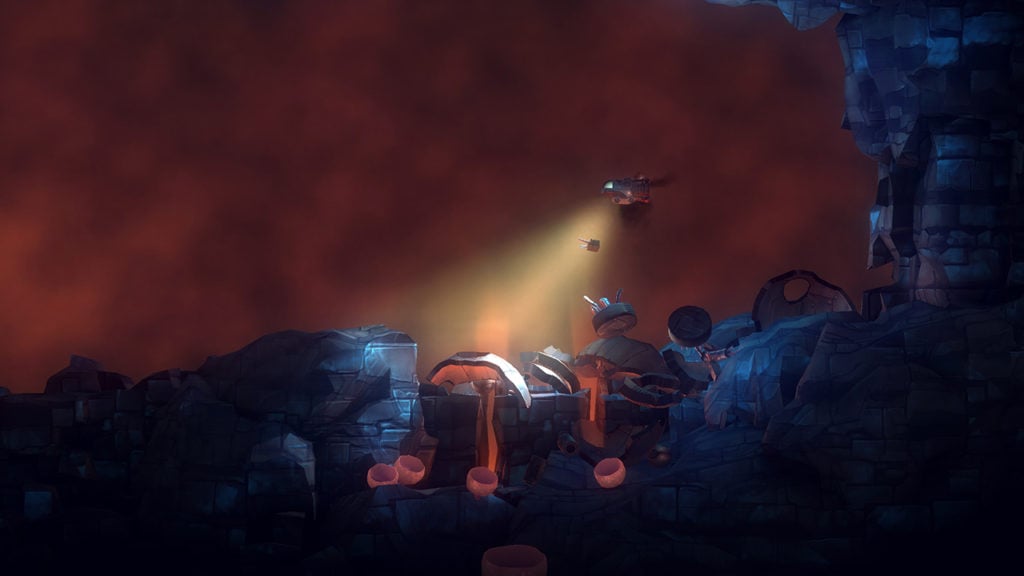 ‘Affordable Space Adventures’ is an excellent example of indies finally finding a home on a Nintendo console.

However, despite these evident, and quite unfortunate, missteps, the Wii U served as a foundation moment in Nintendo’s transition from the short-term success of the Wii into success at the beginning of the Nintendo Switch’s lifespan. One of the Wii U’s lesser-known qualities was that it was a haven for indie games, bridging one of the gaps that Nintendo had created between itself and third parties during the GameCube era. This relationship would blossom during the Switch era, when Nintendo would reconnect with third parties. Much as the GameCube had served as the foundation for the much-more-successful Wii, the Wii U served as the basis for Nintendo’s vision for the Switch, giving them an idea of what mistakes not to make in their pursuit of market share.

In that way, the Nintendo’s Wii U era is eerily similar to their GameCube era. Both consoles lost third-party support in the middle of their lifespan and split a Zelda release with their successors. They were both systems whose power envelope was, for the most part, along the same lines as their successors and who marked, at the time, an enormous increase in Nintendo’s graphics capability. Similarly, after each one failed, Nintendo took the best parts of it and incorporated them into the design for their next system while adding some sort of innovation (e.g. motion controls or portability) that improved upon the original. While it may still be Nintendo’s greatest failure six years after its release, the Wii U laid the groundwork for the beginnings of a nascent, Switch-led revitalization of Nintendo, one that continues to this very day.