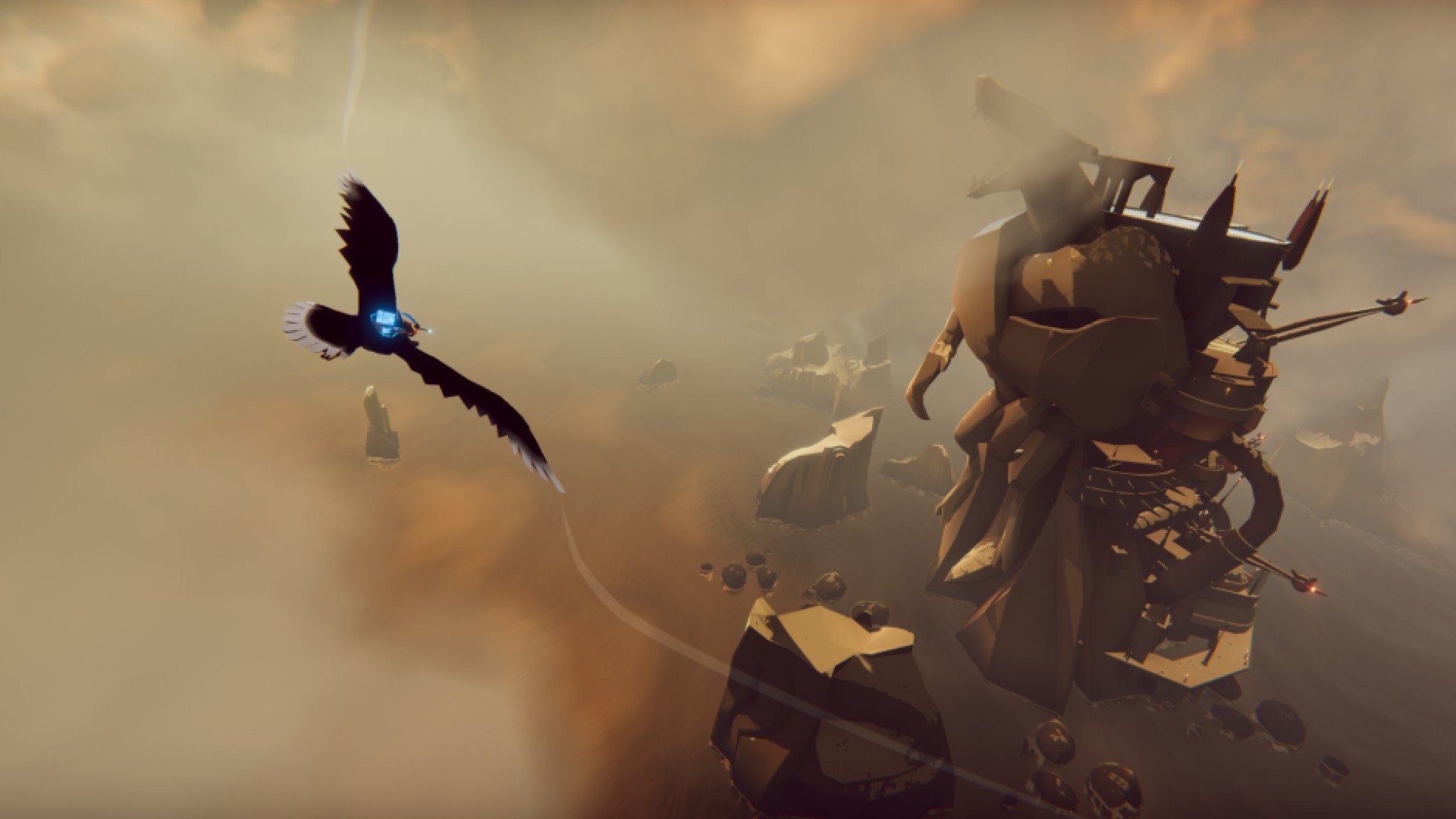 Riding on the back of a fantastical warbird in the same fashion as a fighter plane zooming through intense aerial dogfights seemed like the initial direction The Falconeer was heading in. Unfortunately, underneath that epic chaos exploding over the horizon is nothing but indecisiveness as it has trouble finding a clear direction. It does indeed make a beautiful impression atmospherically and playfully, but it is never that graceful glide you would hope for when all of its mechanics and quirks are combined. If it were not for that great sense of free control and the beautiful horizon ahead, the game would plummet due to the rough amount of turbulence it experiences. While Tomas Sala has created an impressive fleet for a one-man passion project, it becomes blatantly clear during its opening hours that The Falconeer cannot possibly live up to the majority of its daring promises.

The Falconeer initially seems to follow a story-driven narrative, but soon after its tutorial players are head-scratchingly given access to every single chapter the game has to offer. I had at first assumed that this was because the narrative was going to be presented in a style similar to that of an anthology series, but it turns out that each chapter is the same tale perceived by a different clan. Each chapter offers unique warbirds and characters to utilize, but there is no clear direction as to where players should begin or end their journey. This creates a twisted narrative that has real potential. Naturally, you would think choosing the first chapter would be the obvious option, but The Falconeer slowly descends into a game lacking gameplay accommodations to coincide with its unpredictable difficulty. It ultimately turns into something where players might be skipping around to find their comfort zone.

The story though is only the origin point behind many of the game’s questionable decisions. It does not have its wings clipped completely, to say the least, but The Falconeer has trouble with balancing, exploration, dogfights, story, and quiet time all at once within its potentially thrilling adventure. At its core, the gameplay is relatively enjoyable. The controls to piloting your warbird are easy to grasp, the HUD is simplistically pleasant, and fights can often break out into intense battles requiring strategy and careful technique. Customizing your feathered ally can become an immense challenge as the game has trouble explaining how players can exactly upgrade their fighters, but with some tinkering and menu exploration they will likely figure it out with no problem. That is the main issue with The Falconeer though; it never takes its time to slow down. Players are never given the opportunity to take in what’s ahead or listen to a relatively short and sweet explanation.

Even putting those issues aside, these birds never make a single landing unless their task at hand is complete, which can be rather annoying at times, especially given the fact that you are not in combat for the majority of your playtime. It would be nice if the player had been given the opportunity to perch themselves on a mountaintop or fortress tower and just be able to take in the overall atmosphere or be able to take a moment to plan their next course of action. While there are benefits to the feeling of constantly being locked in controllable gameplay, The Falconeer never takes advantage of the unique aspects its lead flying animals are capable of. What’s by far the title’s greatest yin and yang, though, is its sense of emptiness.

On one hand, The Falconeer provides these beautiful atmospheres that gracefully coincide with its gorgeous art style. From the crescent ocean waves crashing amongst small islands to the cloudy afternoon skies, there is always something engaging for the player to gawk at and even listen to as the game provides a wonderfully orchestrated soundtrack that can go from being ambient to epic and powerful in mere seconds. That approachable-sounding landscape, however, is flat-out empty and unutilized for the most part. It’s highly entertaining to fly around thanks to the controls, but it slowly dwindles down and becomes this lonely world that is supposedly at war yet never feels as if it is. Even for an action game, there does not seem to be many land battles or aerial dogfights going on. If the game held a focus on telling a story, these moments of silence could make for real substantial transitions and breaks for the player.

If you enjoy flight games involving combat and exploration and are slightly engrossed in any way by the idea of soaring on the backs of gigantic birds mounted with weaponry, The Falconeer will be a future destination worth visiting for a short period of time. It may be able to soar swiftly thanks to its bugless nature, but it still faces technical issues in need of fixing. For a one-man passion project, Tomas Sala has done a phenomenal job capturing the weight and emotions of flying, but he is in dire need of a team that can add specific elements to help him transform his vision into a masterpiece. Sala has learned to elegantly make a graceful takeoff, but he is far from mastering flying without the support of others.