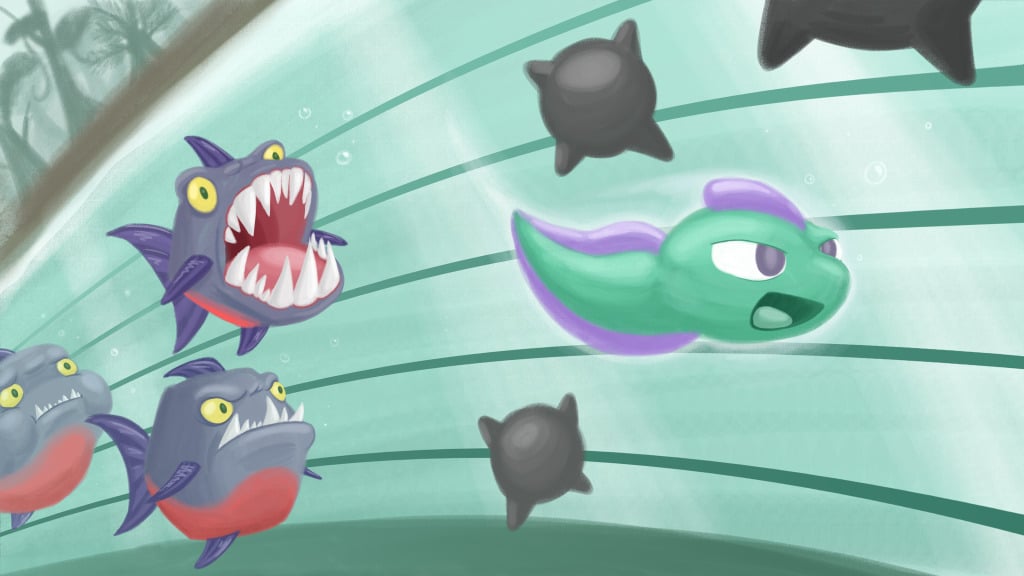 Innovation is a wonderful thing. With music and rhythm games, it’s hard to imagine them any differently than what gamers have already seen and played. But Tadpole Treble Encore, newly released on Nintendo Switch, proves that the best music games aren’t about featuring licensed music or plastic peripherals. With incredibly catchy tunes and a whole lot of heart, Tadpole Treble Encore will disarm and charm even the most jaded players.

Most rhythm games follow a specific pattern, but Tadpole Treble Encore marches to the beat of its own drum. One of the ways the original Wii U release stood apart from its peers was that it not only changed what a music game could play like, but what it could sound like as well. Instead of the usual “falling jewel” model followed by most other music games, where players must time button presses to a cursor crossing a specific point onscreen, Tadpole Treble Encore gives players control of Baton, our tadpole heroine. She constantly is on the move, like a character in an autorunner, avoiding obstacles and collecting bubbles and shimmers in an effort to earn an “S” ranking. Each level has its own layout of spikes to avoid, and players are free to avoid obstacles however they choose. The player can decide how they want to approach each level, either chasing a high score, trying to collect all the bubbles, or simply choosing the path of least resistance so they can enjoy the fantastic music. Songs play on whether or not the player hits all the notes and collectibles in a level, a reminder that not every music game needs to be about having twitchy reflexes.

While the star of the game is undoubtedly the score, the visuals deserve special attention, too. Every stage has a vastly different theme, but everything feels cohesive. There’s the dark and scary Barracuda Caverns, where toothy fish aim to take a bite out of Baton, but the bright and cheerful Snowfall Lake is sure to lift players’ spirits. It’s all wonderfully balanced, and relentlessly cute.

Most startling of all is the breadth and variety spread across the levels of the main game. As players guide Baton home, they’ll hear tracks that act as tributes to 8-bit classics, Disney-esque ballads, and a rip-roaring Western theme in the form of Thunder Creek. The music is uniformly excellent, catchy in the best possible way. It never feels like a grind to replay a level, and there’s even extra incentive to do so in the form of Challenge Flies. Each stage has a Challenge Fly that can be found only by performing a specific task, and it’s a genuine pleasure figuring out what’s required.

Tadpole Treble Encore is a love letter not just to video game music, but to video games themselves. It’s clear creators Michael and Matthew Taranto have a deep appreciation for not only games of the past, but the present, and that appreciation bleeds through every moment. There are sly references to video game history sprinkled throughout every stage, and there’s even a boss fight at the very end of the game, an unusual departure for games in this genre. The entire package is monumentally fun to play, and the joy doesn’t stop after the end credits roll: Tadpole Treble Encore even has a composition mode for the most dedicated fans to make their own tracks.

Tadpole Treble Encore is a phenomenal music game. Its main campaign is short and sweet, but there is ample reason to play through it again and again. The art direction is like a children’s watercolor book come to life, and every song is hummable in the best possible way. Even the end credits are sweetly wholesome, and seeing the name “Taranto” appear so often indicates that the game was not just a labor of love, but a family affair. Tadpole Treble Encore is easy to recommend.