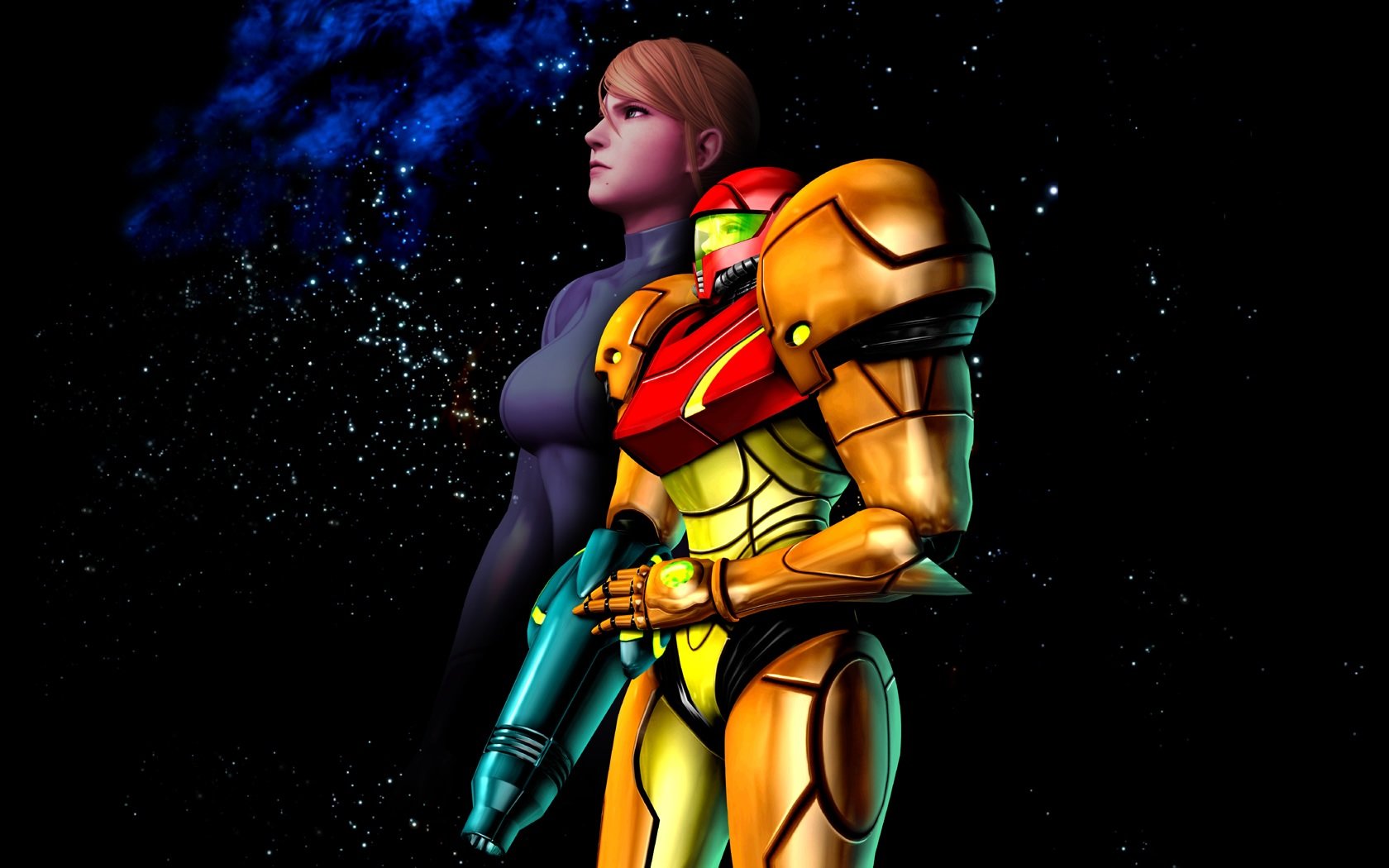 If in space no one can hear you scream, then maybe roaring is no longer necessary; that’s how far intergalactic travel has come. How important gender is to a characterization is of course open for debate, but what if it didn’t really matter at all? Much like Alien‘s Ripley, Bounty hunter Samus Aran of Nintendo’s Metroid series represents a different kind of powerful feminine depiction. Male or female, people are people first, gender second. In the scope of the universe, we’re all the same, indistinguishable specks in the vastness, and so for these women forced to deal with the isolation and dangers of the deep cosmos, their primary identifying characteristic is simply their humanity.

Now of course there is room for a variety of representations of women in games, such that the medium need not, nor should it, resort to one specific kind, but to me there’s something fascinating about what Samus pulled off. As an 8-year-old at the time of release, I remember going to a friend’s house to watch him run and gun his way through the creepy labyrinthine corridors, him blasting away aliens and acquiring awesome powers, me drawing maps, which may not sound exciting, but was totally vital in the 80s. Despite my role as cartographer (which I later learned to appreciate), I, like many boys my age, loved the game and had no trouble putting myself in the power suit of this galactic warrior, obviously identifying with the supercool athleticism and precision aim with such a destructive arsenal, envisioning myself exploring Zebes and taking down that whole Space Pirate operation.

So imagine my surprise during recess one day as my friend told me and several others gathered around listening intently how it ended, that this incredibly badass warrior was actually…a girl. Cue the collective gasp! The minds of prepubescent boys everywhere were blown that day, and for quite some time this surprise twist sustained as a hot topic on the schoolyard. Girls weren’t heroes, at least not like that. Sure, they had She-Ra and Lady Jaye, but in our eyes they were second-class support roles to their star male counterparts. Eventually, however, resistance to this new idea faded away, and by the time we were all playing the SNES sequel, nary an eyebrow was raised. Samus wasn’t a guy; so what?

Just like that, something had happened in our little world, even if we didn’t realize it. Not a monumental upheaval, but a change nevertheless. A game aimed at young boys who wanted nothing to do with girls featured a woman in the lead, and it was totally fine. Hell, it was cool. What strikes me the most looking back at that moment was how nonchalantly it was presented, and the lack of attention over the majority of the series drawn to the fact that Samus is female is something I’m still intrigued by (I have not played Other M, but I am aware that it somewhat bucks this trend). It could’ve been milked, touted, sensationalized, but it’s just there. That a woman in a video game is the driving force behind powerful actions and heroic exploits as opposed to the beneficiary of a male rescuer is a fine thing, but more interesting to me is how her being of such gender is treated as nothing special, and really is hardly mentioned, never dwelled upon. In a medium that often hyper-emphasizes gender roles and stereotypes, that in itself is special, and may contribute to the mass appeal the character enjoys.

It’s no secret that Metroid was inspired in part by Ridley Scott’s Alien, from the creepy atmosphere of the planet, the use of silence in the music and sound design, to the inspiration from H.R. Giger’s design for the Xenomorph. Of course Samus and Ripley have also been compared many times before, as both women fight aliens with guns and generally kick butt, but they also share another similarity: the gender-neutral nature of their characters and subsequent effects of that. In the early drafts of Alien, Ripley (or Roby), and the entire crew of the Nostromo were written as unisex; all roles were meant to be interchangeable between men and women. This enabled the writers to focus on story and meaningful dialogue that fully supported it in order to create the atmosphere and movie-going experience they were striving for. How the parts were cast was left up to the filmmakers, open to their own personal interpretation. Writer Dan O’Bannon envisioned Dallas as an older woman and Ripley as a young man; Scott and the producers saw things differently (obviously in the sequels more was made of her sex, be it motherhood in Aliens or the danger of an all-male prison in Alien 3). Samus’ beginnings can be seen in a similar light, as according to the co-director, Yoshio Sakamoto, part way through development she was still being considered as male, and even the original manual used the pronoun “he” when referring to the hero. By leaving the gender undefined during the creation process, the storytellers of both Metroid and Alien constructed strong female characters by first constructing strong human characters.

“Strong”, by the way, is not meant to imply a physical or mental dominance over their surroundings, but more their relevance to the narrative. A piece from Indiewire on what a “strong female character” can mean does a good job at dissecting this, and both Samus and Ripley pass the test, possibly one of the reasons for their lasting power. In any story, the author wants the audience to be able to identify with the protagonist, at least a little, in some way we can latch on and relate to. Is it possible that one of the reasons both men and women can strongly identify with Samus in most of the Metroid series or Ripley in Alien is because they rarely display any gender traits, are never treated differently because of their sex? This may seem like it undermines what a strong female character should be, as overt femininity is pushed aside, but in a sense, that their character isn’t dependent on their womanhood elevates them to a higher level, a mythical level. Ripley displays the type of cool-headed logic and survival instincts that we all admire and crave; while many might think upon first viewing that Dallas will eventually turn out to be the hero, being male and looking the part, when Ripley defies his knee-jerk dangerous orders by calmly preaching the practical big picture, there is no question whose side the audience is now on. She is the one audiences are meant to identify with, the window into the film’s strange and frightening world. She is part Cassandra, part Odysseus; warning of danger, never heeded, smart enough to survive. How we’ve all felt at times, through the many ages.

As an avatar controlled by the player, Samus enjoys an even more powerful connection to her audience, and has possibly inspired more loyalty. Not as fully realized as Ripley, she nevertheless makes a strong impression based on the bond that only video games can create. By keeping her defined qualities more on the general side, Nintendo’s developers allowed for players of all kinds to flesh Samus out themselves, injecting their own specific personalities to fill in the blanks, providing their own glue to strengthen the attachment. She is no longer just a character, but part of us, part of how we see ourselves in her world. She may exist on her own as a separate entity within the company’s stable of properties, but more than Mario (and very much like Link) she also represents us, and those millions of fans have a specific idea of what their Samus is like, and they want it kept that way. They’ve guided her through her various adventures, faced the challenges, and hopefully come up victorious. To some she may be on a mission of revenge; to others, perhaps she is afraid, yet courageously fulfills her duty. I myself like to think of her as the reluctant hero, grown melancholy over the years at the death she deals out, regardless of its necessity. Yes, she has something of a backstory, hints of military service and a possible romance, but her personality has always been vague. That’s where we come in; we bring something to the experience too. And when something threatens our perception of our hero, reactions are not necessarily kind (such as with the aforementioned Other M). To me this a greater and more fascinating power than any specific depiction could offer, as it is not only accessible to a massive variety and amount of people, but also hits them where they live; it gets personal. Samus is a woman, but she is also all of us.

Any number of different male characters exist in the video game world; the same should be true for women; there are so many stories to tell. But to me one of the most interesting and powerful representations of a pixelated female is one that hardly draws attention to it. True power is not having to explain yourself. Samus just is who she is: a human being. Much like with Ripley, what that amounts to rises above mere sloppy gender stereotypes, instead ultimately portraying something more universal, no matter what planet she’s on.