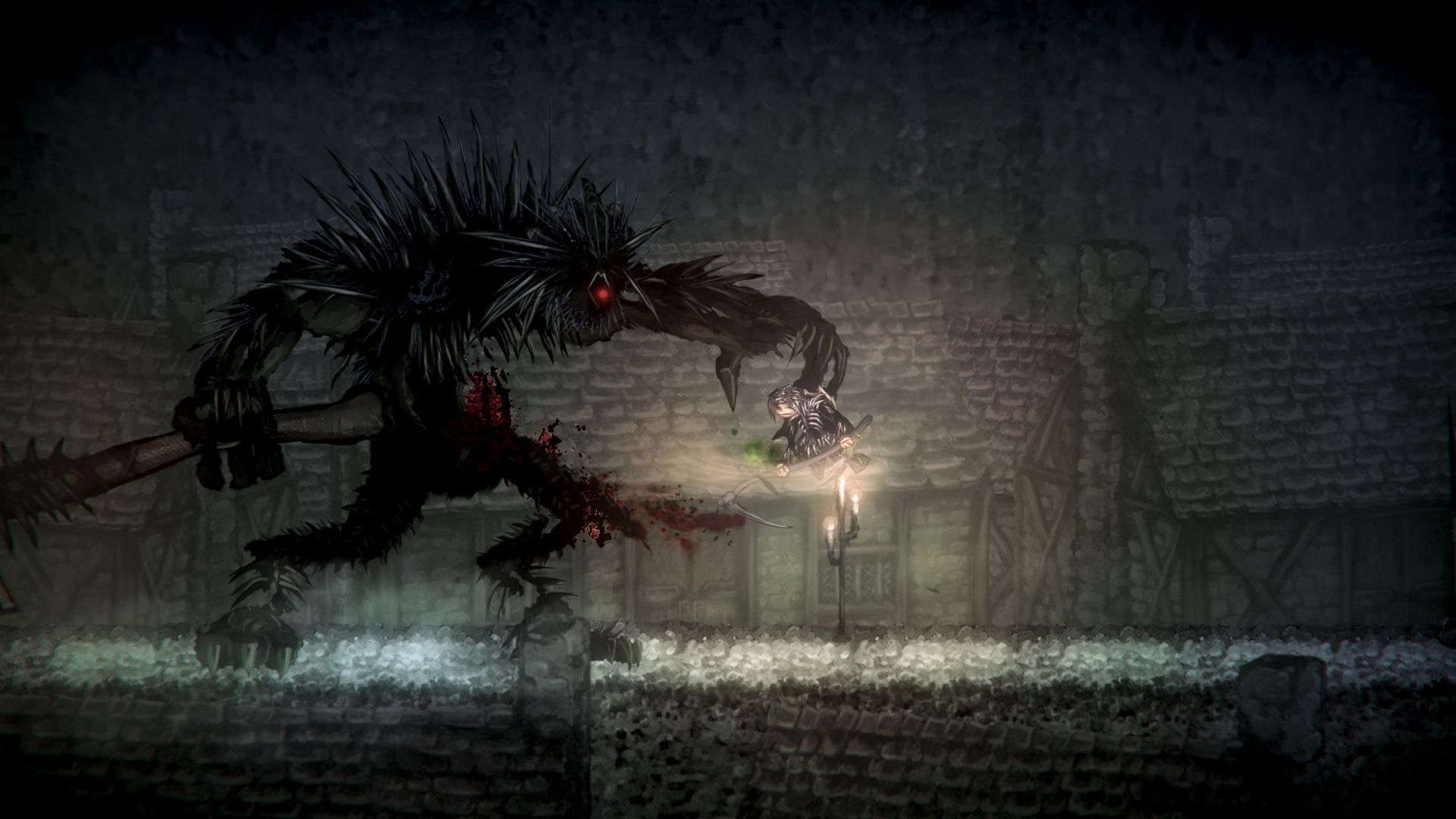 “Without light, there is nothing. It is said: ‘In darkness chaos dwells, and in chaos there is no hope.’ Every night the sun sets, and we see Her light flicker … in candles … in torches.”

Salt and Sanctuary, the latest effort from Ska Studios, is a dark, action-RPG platformer reminiscent of Dark Souls and the Flash games many of us grew up playing.

After the “New Game” option is selected, you are taken to a surprisingly deep character creation screen where you will spend more time than necessary, and finish disappointed in knowing you can’t change that hairstyle you really aren’t keen on. Don’t worry, though, you’ll soon find a nice hat to throw on top.

When you finally enter the game world, you find yourself thrust into the familiar story of escorting the princess to a foreign land in order to save your kingdom from the destruction of war. Things soon go awry and you’re forced to slay demons, dragons, zombies, and all flavors of twisted villains. We know this story. Ska Studios hasn’t reinvented the wheel, but maybe they instead want you to consider how the wheel works.

Salt, the first word of the game’s title and the portion of the game that will have you grieving most, is a material dropped by slain enemies and the currency spent to increase your warrior’s level, which you do to kill stronger enemies, who drop more salt, which, in turn, levels your warrior even higher. Like in From Software’s brilliant Souls games, life in this game world is cyclical and ironic: kill to live. In Salt and Sanctuary, you stand up to the horrors of your nightmares in order to make yourself strong enough to defeat the horror that comes next. The only way to defeat the monster horde is to become the horde’s horror.

Acquiring salt is rarely easy, but you are set up to succeed. Controlling your sprite is as tight and responsive as in any great platformer and also easy to learn. Upgrading abilities are extensive and allows for true customization, which is a nice change from the faux customization offered in similar games. When monsters are exterminated and the salt plate spilleth over, you are ready to bump your fighter to the next level. This task will have you deciding which attribute to increase based on your position on the tree of skill, something Final Fantasy X veterans will easily learn. This evolution doesn’t happen in the haunted castle halls or beast-infested caverns where you do your slaying, it happens in sanctuaries – safe rooms nestled away in each terrible location that really seem to exist in a space between the world of terror and the comfort of the sacred.

As you progress through the unknown land, fighting the giants and unlocking doors to hidden treasure, the security of the sanctuary will sit in the back of your mind, requiring attention. Salt and Sanctuary is an exhausting game, and you will always find an excuse to seek relief. Five bottles of health potion are probably enough to see you through the next sanctuary, but you can’t quite the nag. The frequent disappointment and frustration of shattered plans and the mystery of the unlit passage ahead weigh on your mind like Hell’s famous inscription from Dante’s Inferno. Indeed, the land of Salt and Sanctuary is the land of Hell.

As your reliance upon the sanctuaries grows, their ineptitude to satisfy your needs grows as well. The sanctuaries only compel you forward to darker days, and offer you little protection from the swarm outside – if you aren’t fast enough in your escape, a devil could find his way into your sacred space and kill you in the place you thought you were most assured – being on the run from an enemy thirsty for your salt is frightening, but seeing that dark creature audaciously enter your asylum is a deflating moment, and it is here that Salt and Sanctuary proves itself as a horror heavy hitter.

You aren’t alone as you explore the island – some sanctuaries are populated by devout followers from one of the several religions the game showcases, and you are offered to convert to their doctrines as you use their facilities to refresh. Salt evangelists. Each of the seven Creeds has it’s own sacred texts that you will sometimes come across, each varying in subject to match the God of that Creed. In what could’ve been one of the more original and interesting aspects of the game, it’s potential was forfeited for me when I realized that my constant conversion from faith to faith was hurting my potential to carry more of the unique potions I so desperately relied on. It wasn’t until after I had slain The False Jester (the fifth boss) that I realized I had been hurting myself. Maybe I’m dense, but it wasn’t explained or even hinted at. In that way, what could’ve been an exciting feature to explore felt more like a throwaway.

Where the religious factions were underutilized, the boss fights were intense and a blast to figure out. As any longtime gamer can attest, a boss battle is a living puzzle that requires solving. When you fail, persist, adapt. You let the challenge teach you something about patience, an each of Salt and Sanctuary‘s boss fights scores high marks on this test. Some bosses were defeated after a couple of tries, and others were barely bigger than my hero but refused to let me win until I had killed enough minions to earn a level increase. Some required all-out high-octane offense and yet others were enormous but demanded to trade blows until one of us gave up the salt. Regardless of the tactics and number of tries on the way to success, each fell to the new boss.

Much has been said about the similarities between this game and the From Software titles, and that’s no clearer than at the game’s conclusion. Yet the similarities never feel like a cheap imitation – Ska Studios has taken a gaming style and polished it to the point of calling it their own. I see the island of Salt and Sanctuary as a place that could non-canonically exist in the world of Dark Souls, alongside neighboring Bloodborne. As much as one could imagine Bloodborne tying into Dark Souls, Salt and Sanctuary has just as much right. It’s a dark, horrifying, achingly hopeful adventure story that urges players to evaluate their place within the chaotic darkness around them. May the Salt fall plentifully.

Tyler is a husband and dad who does not neglect his family for games. Well, he may at times, but he never takes back what he says... Unless it's an arrangement to play Rocket League with you later.