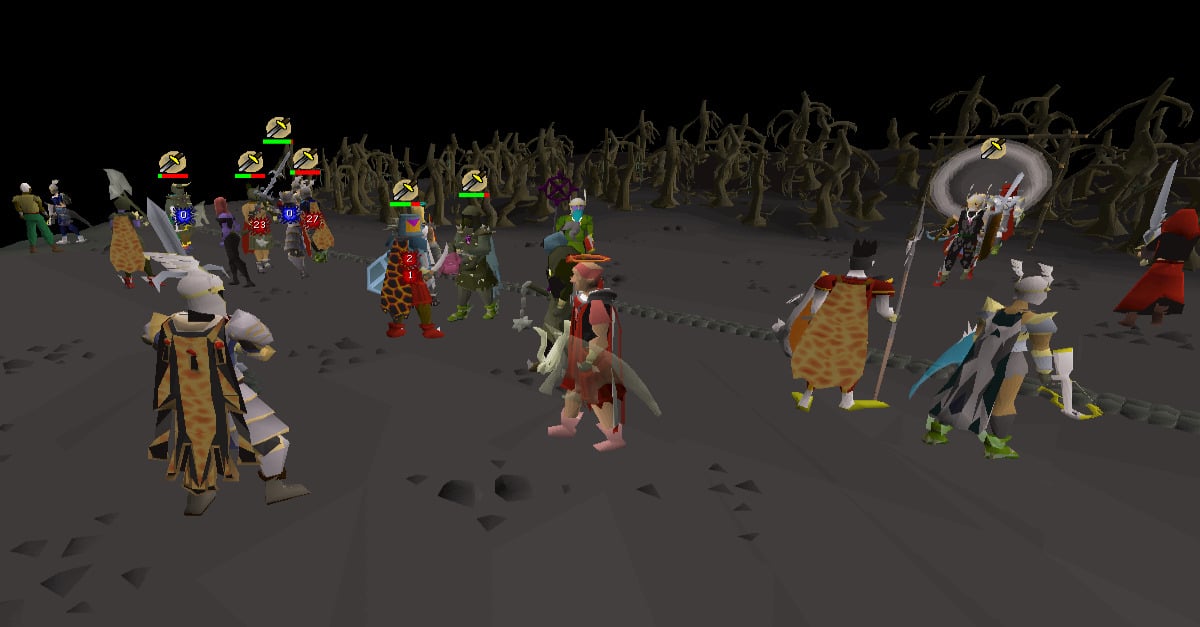 For those not in the know, RuneScape is a big deal. A darned big deal. At least to those in the MMORPG world. Now entering its 21st year, it’s one of the biggest MMORPGs out there and probably the best free one. The theme is high fantasy, with an equally strong medieval tinge running all the way through it – a combination that works superbly well; just ask J.K. Rowling. RuneScape is significant on a personal level for three teeny-tiny reasons: being the first MMORPG I played; the first game I could be said to have been addicted to; and the first game I got into that could be described as ‘online’, though far from the best. Still, that’s three gaming milestones not to be scoffed at.

Following a brief and bare-bones tutorial on the aptly named Tutorial Island, I found myself dumped in the uneventful but rather pleasant riverside town of Lumbridge. There, every new starter masters the basic mechanics, like how to make fire or put money in the bank. It’s important to note that, in RuneScape, everyone starts out on a level playing field (weirdly, at level 3). There’s no set classes or predetermined builds, only skills, ideally with the end goal of getting every one up to its maximum level of 99. However, since that’s neither practical nor perhaps desirable for most of us, it’s probably best to specialize in just a few. Meanwhile, the overall character or combat level has a maximum limit of 126 (or 123 in RuneScape Classic). I think I got to 82 before deciding to call it a day. Maybe school started up again.

There’s also five attack types to master: stab, slash, crush, magic, and ranged. At first, my measly prey consisted in goblins and chickens, but there’s plenty of bigger and more dangerous fodder out there. Predators, too. For sure, RuneScape has a steep learning curve in the beginning. Once I got those base skills covered, it’s all go and I soon found it difficult to step away from the computer screen.

Yep, 232 in all, spread across a generously-sized world map varied enough to satisfy the curiosity of my twelve-year-old self, each one a unique little short story with outrageous plot and witty dialogue. Personal favorites include solving the mystery of a missing chicken at Draynor Manor and sneaking into the seemingly impenetrable Black Knights’ Fortress on behalf of the rival White Knights of Falador. But neither of those beats slaying the dragon on Crandor – by far the greatest and most memorable feat a free-to-play player can accomplish. More quests are unlocked by becoming a paying member of RuneScape, which I duly did. This also opens up a large chunk of the world map along with a whole host of other things which marked me out from the lowly noob I’d so far been.

You can of course simply free roam and traverse the vast deserts and plains or head east into the gloomy vampyre-infested swamps of Morytania, ideally with the Bobby Pickett song ‘Monster Mash’ playing in the background. Speaking of songs, entering a new area for the first time unlocks the corresponding soundtrack(s) for that area. There are some very catchy tunes in there. I remember having a Christmas one on repeat.

The More the Merrier

Alongside the adventure, role-playing is the massively multiplayer aspect, and boy was it great to have thousands of players with whom to compete, trade, and compare me against. RuneScape also comes complete with friends lists and on-screen chat, proving to my small PS2-configured single-player mind that gaming can be a communal as well as a solitary experience. PvP (player versus player) areas are aplenty, from the sudden death drama of Duel Arena to the frenzied pandemonium of Castle Wars. Or, if I wanted something more relaxing, I could go chill by the river in Lumbridge or some town marketplace and watch the virtual world go by.

For all its cut-throat competitiveness, RuneScape isn’t just a motley collection of individuals. Well, okay, it is that … but like any other community, RuneScape’s can band together and help each other out in a few shining moments worthy of the knightly honor often portrayed on screen. The greatest deed has to be on the part of developers Jagex when they dedicated an in-game statue (and, more recently, a pub) to the memory of a top player, ‘The Old Nite’, who sadly passed away in real life in 2006. He’d been active almost since RuneScape’s inception in 2001 and frequently held the mantle of second-highest ranked player, just behind Zezima. Due to alleged activity on his profile post-2006, a myth circulated claiming he was still alive, but this was also allegedly put down to hackers temporarily gaining access to his locked account. Whilst neither of those claims can be fully substantiated, this virtual equivalent of a ghost story does illustrate another cool thing about MMORPGs: bits of lore can start up about the players actually playing them.

I’m not sure if the statue to The Old Nite still exists, but it stood near the southern edge of the Wilderness (or ‘Wildy’ for short) – a large expanse of wasteland in the north, frequented by beasts and player-killers. I never made the pilgrimage to see it. Stupid me.

RuneScape’s biggest flaw, which might also be its biggest asset, is one that’s shared by almost every other MMORPG: sheer longevity. In between all the thrilling quests and high-octane PvP skirmishes is the relentless grinding out of mundane household chores like fishing, mining or cooking in order to level up or get the credits to buy that pesky new helmet or piece of armor. Gotta make money somehow, right? Whilst those activities can be mildly therapeutic, it’s time spent doing the same thing over and over – time that may or may not be better spent playing through some shorter but no less classic video games. Rather than being one straight battle, RuneScape is a painstaking war of attrition that is both long and grueling, and which never truly ends. However, it can be highly rewarding if you’re prepared to put the time into it, which I was. At least for a year or so.

I haven’t played many MMORPGs since, to my everlasting loss and shame. Real-life cares multiply and I simply don’t have the time to let them suck me in. Of all games, they’re by far the most time-consuming, with endless levels to attain and items to collect. Heck, people have died during or in the aftermath of hours-long binge sessions of RuneScape’s younger but more popular sibling, World of Warcraft, which I guess also makes it a horror game.

These days, you can usually find me playing Quake or Half-Life or hanging out on Team Fortress 2 – games that come in force, leave their mark and are gone quickly. It’s great to play something I can enjoy and then forget about rather quickly, instead of having to worry about how many logs of wood are in my inventory or where I’m going to be fishing in tomorrow’s session. That being said, I do miss part of the endless grind and long-term involvement (and pain) that comes with RuneScape. Now in its third incarnation as ‘RuneScape 3’ (from 2013) with added content and a graphical overhaul, there’s a glimmer of hope I may revisit it just to see how it’s getting on, much as I would an old friend.

To The Old Nite, up in RuneScape Heaven.