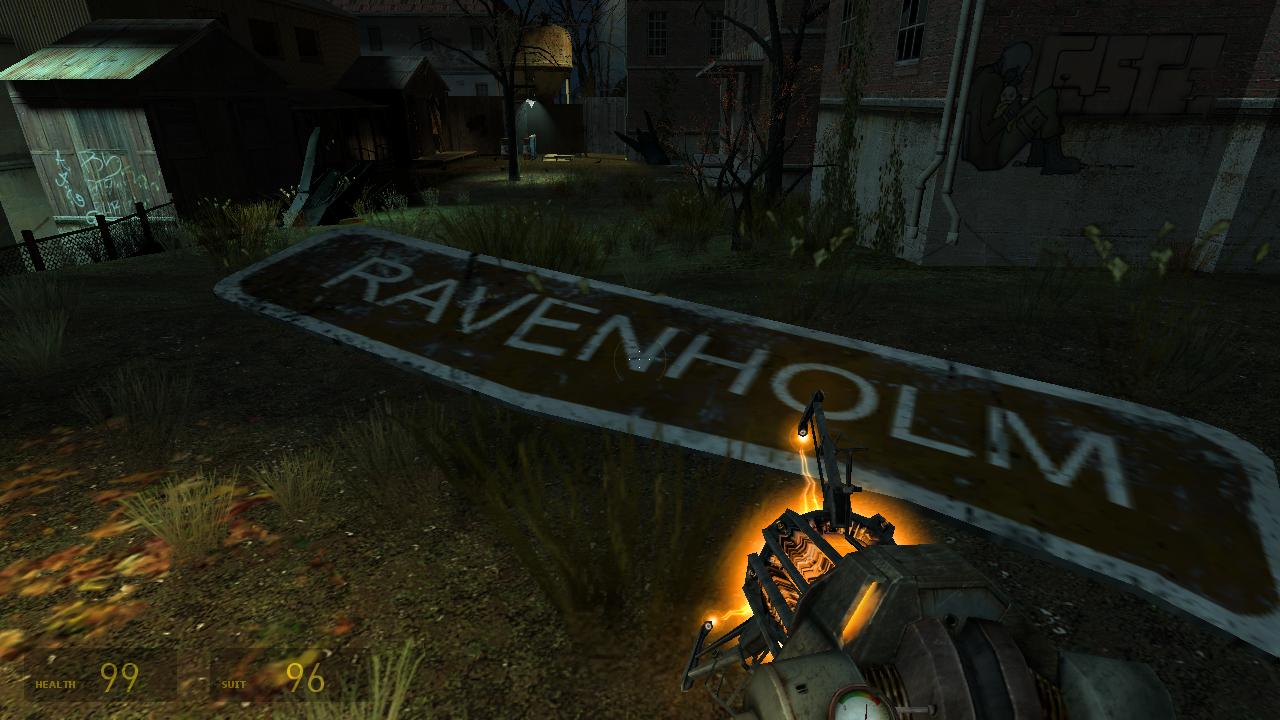 Half-Life 2 is often seen as one of the greatest games ever released, even by Valve standards. The perfect mix of old-school sci-fi, shooting, and (at the time) the height of graphical fidelity. Nearly every part of it is memorable for one reason or another, but nothing in the game beats Ravenholm, the sixth chapter of the game. In many ways, even a decade later, this is as close to perfect as a game’s level can be. 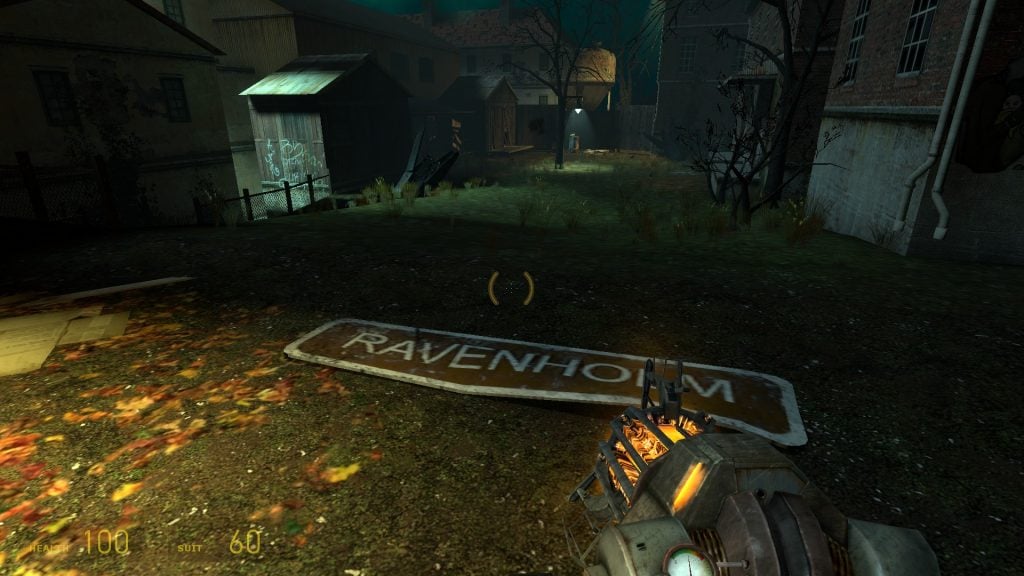 Heed well the warning.
“We don’t go to Ravenholm”

Ravenholm starts with the tease. After escaping the Combine forces and a harrowing trip through the alien controlled waterways, Dr. Freeman is reunited with his friends at their secret lab. In a moment of levity Freeman and the game’s female lead Alyx Vance decide to try out the Zero Point Energy Field Manipulator, or more commonly known as the Gravity Gun, with a game of catch in a lower courtyard of the base. On their way to the courtyard Alyx and Freeman pass by a blocked off corridor, with Alyx coldly remarking

“That’s the old passage to Ravenholm. We don’t go there anymore.”

From that one statement you know everything you need to know about Ravenholm. Something has gone horribly, horribly wrong and you will soon be forced to find out what. Sure enough, the Combine soon attack the facility and an errant explosion leaves you without any other choice. Despite all the warnings, you’ll need to go through where no man travels.

The signs are clear even before you actually enter the town. Down the corridor from the  lab is a ladder leading upwards, a slumped and mutated corpse its gate-keeper, and a dead head-crab falling down a pretense to what awaits. After climbing the ladder and entering the town it’s immediately clear why people avoid Ravenholm. The town sign lies shattered on the ground at your feet, and corpses litter the grounds. As you progress slowly through you survey more and more of the damage, getting acquainted with the dead city and its denizens.

Everything in Ravenholm goes back to Valve’s “three step rule”. Step 1 is introduction, letting the player see something in a safe environment. The gravity gun is introduced to the player in a game of catch, Ravenholm is teased in a line of dialogue, even the head-crabs that infest Ravenholm are previously explained as regular Combine tactics. Everything you need to know about your enemy and situation are presented without incident, leaving it up to you as the player to piece it all together.

Step 2 is controlled interaction, make the player try out the new discovery slowly to let them learn. Immediately after entering Ravenholm you find yourself in a workshop, littered with saw blades and familiar explosive barrels. A corpse hung on the wall by a blade gives a subtle hint as to how to handle the situation, a hint best learned quick as a group of lumbering corpses make their way towards you.

Step 3 is implementation, requiring the player to use the knowledge that’s been fed to them. Ammo is scarce in Ravenholm, and taking on the horde with your firearms will quickly drain your reserves. You need to learn to use the Gravity Gun effectively to survive, desperately flinging blades, boxes, and whatever you can grab as you try to stem the tide of undead.

Let’s talk about the undead, something of a misnomer since they’re more mutation then proper zombie. The first Half-Life game introduced the idea that head-crabs act as parasites, attaching themselves to the host and turning them into lumbering beasts, slower but much more resilient than the crabs themselves. Ravenholm, having been the target of a Combine head-crab bombardment, is overrun with zombies, and throughout the chapter they present the only threat, an interesting reprieve from firefights that the player is used to by now. 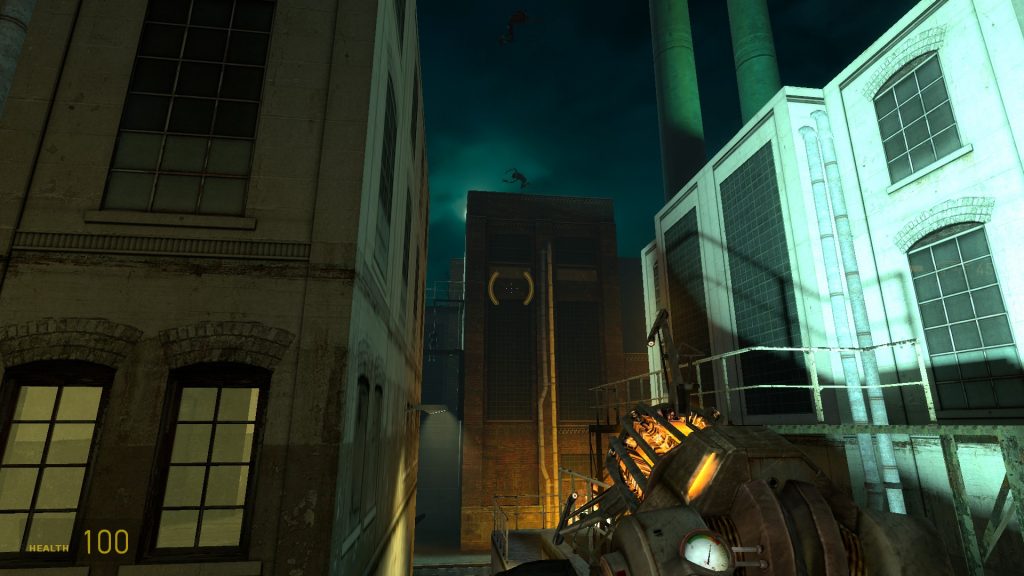 A quick preview of the horrors that await.

Ravenholm’s use of zombies represents what works best about the undead, they just keep coming. Head-shots only do marginal extra damage, and bisections and decapitation don’t always end the fight. Throw whatever you want at the zombies, but they just keep coming. Worse is the implication of what a head-crab does to their victims, and there’s a sickening familiarity to their cries of pain. A zombies set on fire will scream in agony, and a good ear can pick up the horrifying sounds of human anguish, muffled and distorted by the alien tormentor.

Ravenholm’s most infamous claim to fame is the introduction to head-crab mutations, in two horrifying flavours. First is the poison-crab, more spider-like in appearance with a terrifying black sheen. They are equal parts insidious and ingenious due to their inability to kill the player directly. As the name implies the poison-crab injects the player with poison, reducing their health to a single point as Freeman’s suit slowly injects anti-venom. For several seconds this leaves the player nearly helpless, as any random slash or smash can put them down forever. Worse is the poison-zombie, a horrifying tank of a beast that carries multiple crabs on its back, tossing them like grenades at the player. Able to withstand several blasts from a shotgun or grenades, even in death they serve as a nightmare, as their parasitic tormentors jump off, a final act of defiance and annoyance.

Then there are the fast-crabs, who stand taller then their vanilla cousins and move with lightning speed. Hitting the fast-crab becomes a challenge as you waste precious ammo in a vain attempt. Their zombie form is the thing of nightmares, letting out ear-wrenching howls into the night and leaping over any obstacle. The penultimate chapter of Ravenholm sees the player holding a desperate defense against a horde of these abominations, a possible prelude to Valve’s later Left 4 Dead titles and a memorable point of an already memorable campaign.

Ravenholm isn’t completely abandoned to its fate however, and there is one shining light in the darkness. Father Gregori, if that is his real name, claims to be the shepherd of the wayward flock, preaching the light of God through the barrel of a rifle. His mission: cleanse the unclean of Ravenholm. His history is a mystery, and he never even bothers to learn Freeman’s name, only referring to him as “brother”, a brother in arms and a fellow human lost in the grim nightmare of the dead city. It was he that set the traps littering the streets, with the odd hint that he may have been learning about his flock as he tears them apart. His motivation seems pure however, going so far as to advise Freeman on traversing the town, and equipping him with the level’s second signature weapon: the shotgun. 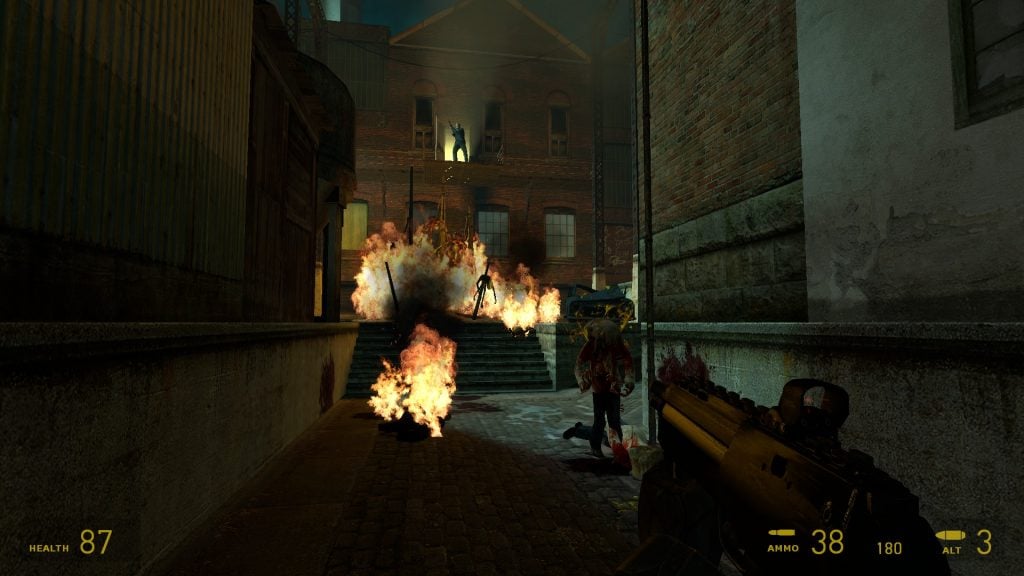 In zombie fiction there is no greater weapon than the shotgun, and its presence in Ravenholm is more then a simple nod to that. On the surface, it’s the perfect weapon, a great pairing with the Gravity Gun. It does enough damage in close quarters to drop enemies with a single blast, and can fire two shells at once for an extra punch, perfect for clearing the crowded streets and narrow alleys of the mining town. There’s a sinister trade-off though, and the joy of blasting zombies to bits is quickly replaced by the horror with the empty click of an empty chamber, followed by the desperate scramble to slam shell after shell into the hungry weapon, praying for just enough time to be able to fire again.

Finally Ravenholm ends with an explosive finale, a romp through the desecrated holy ground of the town’s cemetery, a fitting end to the land of the dead. It’s here that every element comes together, as you mix Gravity Gun antics with skilled blasts of the shotgun to thin the mass of ghouls in your way. In a short moment of silence Gregori opens the way forward, letting you go with one final crazed blessing and a laugh as his flock envelops him. His fate is unknown, just another crazed human in the land of Half-Life 2, his laughter a distant echo as you make your escape.

Ravenholm isn’t just the best part of one of the best games ever, it’s also a how-to on level design. Its constant use of Valve’s three-step rule a benchmark by which other games, even other Valve games, should be measured. In the great pantheon of gaming levels, this short and sweet horror romp stands tall, saw blades and shotgun held aloft, ready for another challenger.