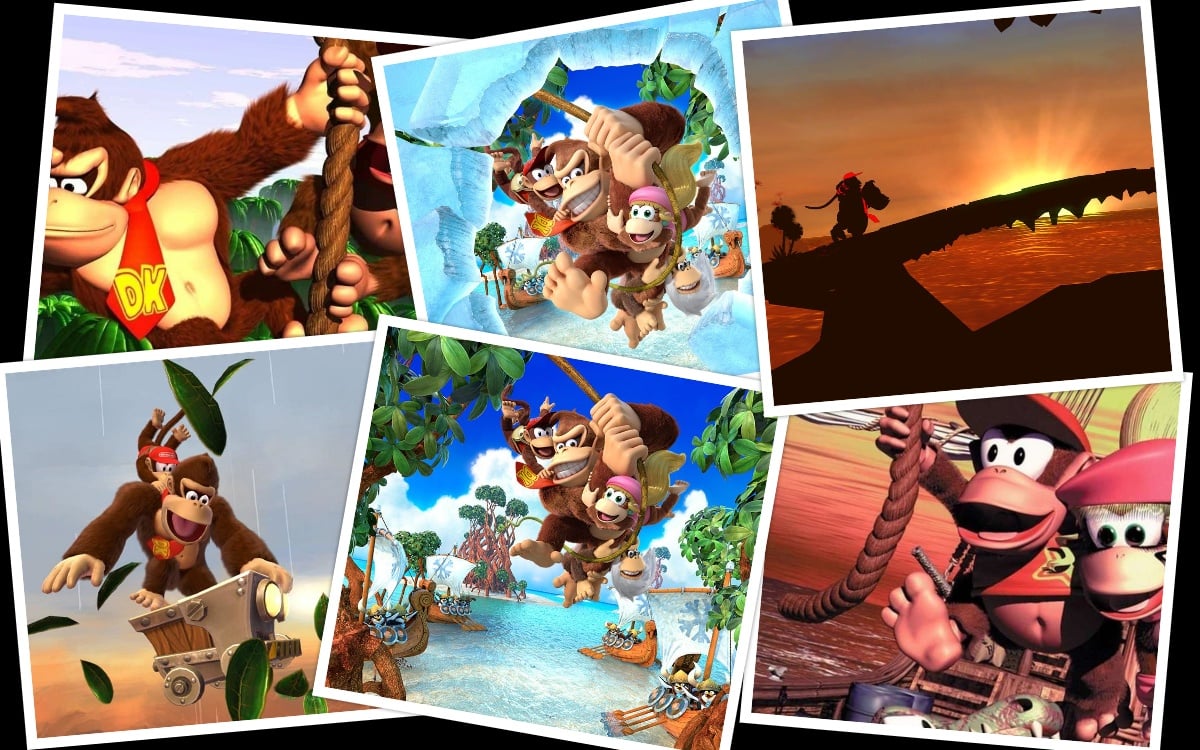 What is the best Donkey Kong Country Game?

The Donkey Kong Country games are fun. Ridiculously fun, even. So fun that they’ve stamped themselves into gaming history, just because they’re so fun. Leaping, bouncing, swinging, and punching my way through their levels always leave me with a grin on my face. I have an endless amount of love for their creative level design and smooth, butter-like controls. Regardless, it’s the big ape’s thirty-fifth birthday. He started out throwing barrels at Mario way back in the original Donkey Kong — released in 1981. Now he’s busy running through his affirmation solo series: Donkey Kong Country. With that said, it’s time once again to celebrate the DKC series and rank all five games!

At the rear end of the list is the weird stepchild of the family: Dixie Kong’s Double Trouble. It’s not a bad game, it’s just the worst game. It has a lot of great things about it, but never reaches the peak that its siblings do. Starting with its visuals, DKC 3 is a huge step-down. The 2 previous games used a realistic style that was almost surreal. DKC 3 holds onto that same engine but hits it with splashes of color in an attempt to lighten the tone. But, it ends up with a mess of an aesthetic. The colors are there, but they’re faded and weak. It doesn’t pop like the other games — which were revolutionary for their use of realistic graphics. Instead, it looks dull and unremarkable.

I want to emphasize that Dixie’s Double Trouble is not a bad game. It rests at the bottom of the list, and I need to explain why. That being said, why did they get rid of Diddy Kong? The second game is a joy to control because we play as two light characters. Dixie and Diddy jump around with absolute grace and control, while Kiddy and Donkey — the two heavier kongs playable in Donkey Kong Country 3 and 1 respectively — are clunky and comparatively weighted. My point is that the former was obviously superior, yet one of them is ditched in this installation. This means that 50 percent of the time — when controlling Kiddy —  you’ll be wishing you were playing its predecessor or the game before that.

The founder, the originator, the bringer of good tidings. The original Donkey Kong Country proved that Mario’s platforming elegance could be rivaled. Its graphics were revolutionary, as they brought photo realism to the table. The forests are vibrant and riddled with different kinds of natural flourishes. The oceans are ambient and immersive. The caves feel ancient and unexplored. All of this achieved on a console more than 20 years old. Donkey Kong Country has aged like a fine wine; the older it gets, the more I can appreciate its brilliance.

Of course, it was the first, so everything it did has been done again. But, my appreciation lies in its timelessness, originality, and innovation. In a market dominated by mascot-filled platformers, Donkey Kong Country may not have stuck out at first glance. But, playing it showed how comparatively pure it is. It was the absolute epitome of platforming. Jumping is your main attack, technique, and mode of transportation, and doing it feels good. Bounding from platform to platform with grace and speed is difficult but rewarding. Bouncing off enemies’ heads in a rhythmic fashion is satisfying. Combining the two creates a swift, non-stop momentum. This made Donkey Kong Country one of the greatest platformers of its time.

At least, until its sequel came along.

The best of the original trilogy, Diddy’s Kong Quest did everything a sequel should. Now that the general concept of Donkey Kong Country — run, jump, collect bananas — had been introduced, it was time to expand. DKC2 continues with its predecessor’s realistic aesthetic but provides a solid theme for it to surround — pirates. You play as Diddy and his cousin Dixie through pirate-themed worlds (ship harbours, beaches, ghost ships, the like). The music and enemies go along with it as well, meaning you listen to sultry pirate chants and fight peg-legged foes. This theming gives us some excellent and interesting locations to explore, while also limiting some environmental possibilities.

The gameplay is at its peak. The acrobatic Diddy and Dixie are an absolute treat to control. Dixie can use her ponytail to glide, adding that little level of leniency needed during those especially arduous jumps. This also means that Diddy is now the worst of the pair. Though, unlike DKC and DKC3, neither of them is actually annoying or clunky to control. One just provides some escape from what would usually be indisputable death. Regardless of who you pick, Diddy’s Kong Quest is one of the best platformers of all time. It’s clean, unadulterated fun, and would be the best game in the series for fifteen years.

After fifteen years of waiting, this fantastic game did exactly what it suggested: it revived a long-dead series in a way that only it could. Even though Rareware — the developer responsible for the original trilogy — had been stolen away, Donkey Kong Country Returns managed to capture the same charm carried by its ancestors. More than that, this reboot improved on every single aspect that made those games so special. It ditched the photo-realistic graphics and moved on to 3D character models and environments. Everything pops with color and personality. I often found myself stopping in place just to enjoy the vibrant scenery. Especially in the sunset levels which show Donkey Kong as a cool, black silhouette.

Your average locals are here, but Retro Studios — the developer now in charge of the series — knows how to keep things original and interesting. I traveled to a beach, but it was one populated by pirates, killer krakens, and mutant crabs. I explored a forest expecting to find nothing of interest, then I was chased through a giant collapsing tree by a swarm of flesh-eating spiders. Regardless of where I ventured, the level design was absolutely brilliant, and it’s only complimented by how excellent Donkey Kong controls.

Donkey Kong Country Returns loses the character switching system, opting instead for Donkey being the only option. This time around, he controls much smoother and less clunky. He moves exceptionally swift and jumps in long, arching patterns. Having Diddy Kong be playable would be unnecessary, as Donkey fills his acrobatic role flawlessly. Instead, Diddy works as a power-up of sorts. He piggybacks on Donkey, providing some extra length while jumping using his handy jetpack. He also lets the player take two more hits before dying. Because of its consistency, I prefer this system over the previous. It allows for steady gameplay, as losing Diddy only means a more difficult experience.

Donkey Kong Country Returns not only showed what Retro Studios was capable of, it proved that the series still had plenty of potential. And 4 years later its sequel would prove it again.

Much like Diddy’s Kong Quest, Tropical Freeze recognizes that the formula has now been established. It seeks to expand and does so with perfection, intelligence, and skill. It doesn’t re-hash anything and nothing is left unpolished. The visuals have gone full HD, providing extremely detailed environments and characters. Grass flows in the wind, the lighting adds gorgeous hues of color, the Kongs’ fur sways when moving. Donkey Kong Country Returns was already a beautiful game, but Tropical Freeze takes it that small step forward. It brings a world that already felt alive to a level of immersion rarely found.

Oh, and let’s not forget that soundtrack. David Wise, the composer for the original trilogy, returns with a vengeance. Every level has its own theme surrounding its instruments. The shoreline has steel drums and bongos banging in the background, giving a tropical jungle feeling. The alpines have mystical, soothing flutes to keep you entranced. The caves are serene yet threatening, preparing you for what’s to come. Wise’s composition is the most brilliant I’ve ever heard in a video game. Because of it, Tropical Freeze’s soundtrack is my favorite of all time.

Of course, Tropical Freeze is more than just technologically impressive. Its mastery of platforming had me stunned from the moment I picked it up. The controls are pretty much the same as Returns, it’s what is done with them that impresses me. Every location is completely covered with unique platforming challenges, amazingly fresh concepts, and well hidden, rewarding secrets. Swimming was absent from Returns but makes its comeback here. Instead of controlling like Mario games as the original trilogy did, this gives the player full control. You can swim with utter precision, but that doesn’t mean the water levels are easy. It means there’s even more room for challenge.

Not only is Tropical Freeze the best Donkey Kong Country game ever, but it’s also one of the best platformers ever, and certainly the best of this console generation. But, what do you think? Is the original the best? Or does its sequel still hold the top spot? Be sure to tell us how your list would look.