While we didn’t have a formal appointment to preview any of the fine games they had on display at this year’s E3, but after inquiring at their media counter, the good folks at Bethesda were kind enough to provide us with last-minute passes to get our hands on two of their most exclusive sensory experiences at the show: a private presentation/playable demo of Avalanche Studios’ Rage 2, and a beat-up armored transport converted into a post-apocalyptic ice cream truck. For the weary convention floor walker tired from waiting in soul-draining lines and dodging pesky YouTubers, this carved-out corner of the West Hall was a rusty, battle-scarred oasis in the desert. But strip away the instant good will gained from a simply having a bite to eat, a game to play, and a seat to sit in, and how did each of these offerings fare? Let’s take a more in-depth look. 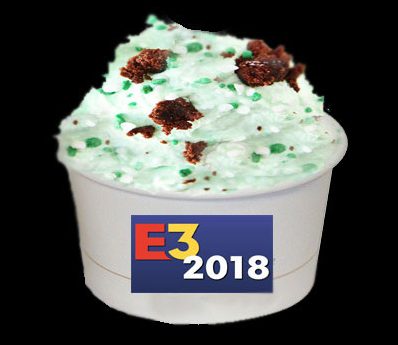 The shortest line at E3 (and surely one of the most coveted) led to a re-purposed armored vehicle that would have belonged right at home on Fury Road. This four-wheeled gunship had probably seen better days before the End of Days, but despite the numerous bullet holes, dents, and missing doors, the precious frozen cargo it carried inside was still intact. Two very nice road warriors served up the flavor of my choosing (mint chocolate chip all the way), as well as offered an impressive selection of sprinkles and other assorted toppings that must have been extremely hard to come by in the bloody, supermarket-less world of Rage. I decided to opt for decadence and brownie bites as my accouterments, and I was not disappointed.

The chunks of brown really made the green ice cream pop, creating aesthetically pleasing visuals. The plastic spoon controlled like a dream, stiff enough to feel sturdy, yet displaying just the right amount of flexibility so as to allow for the perfect scoop. If I didn’t get a perfect mouthful, it really felt like my own fault. Cold without being overly frozen, creamy without becoming soupy, and bursting with the kind of flavor that only someone who hasn’t eaten for six hours can appreciate — easily a nominee for Best of Show. 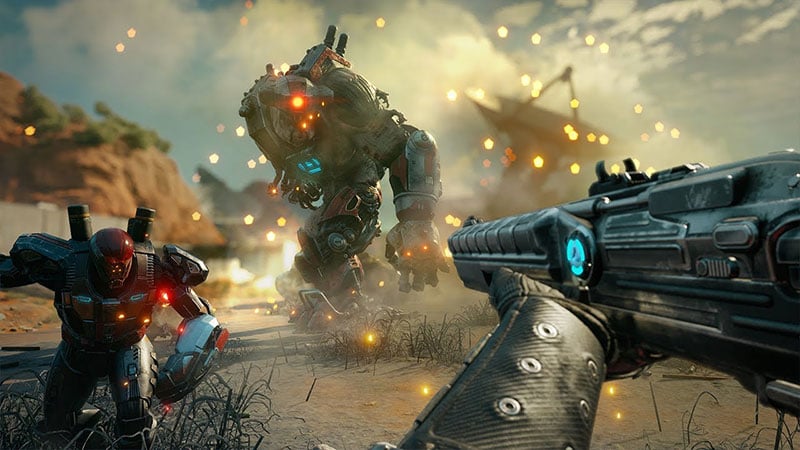 After obtaining that cup of sweet delight, we were guided into a private room that looked like the dusty  garage of a Mad Max wannabe, a hoarder’s paradise of derelict car parts and broken, buzzing electronics lining the stained walls, with random barrels and a broken-down Jeep providing a place to kick up one’s feet. A brief video demonstration introduced us to the cataclysmic world of Rage 2, with an emphasis on the physics-defying action that showed off ground-pounding blasts, bodies juggled by bullets, high-speed vehicular mayhem, and deadly wingsticks that curved around corners to slice their victim. The video also showed off several different terrains over which the open world destruction would take place, each more richly detailed than the last. A stereotypical wasteland, a frozen tundra, and a dense jungle are just some of the beautiful environments players will visit — and probably destroy. If I wasn’t pumped for Rage 2 until then, I certainly was in a better frame of mind for FPS killing sprees after witnessing the glorious violence on display.

After a few more words from the developers, soon it was time to play. Having never played the original Rage, I obliged myself with a quick tutorial that explained some of the game’s particular mechanics — like punching the floor to create a shockwave — but anyone having even limited experience with id shooters should feel comfortable enough before long. Once I had the basics down, it was time to take on something other than target dummies. 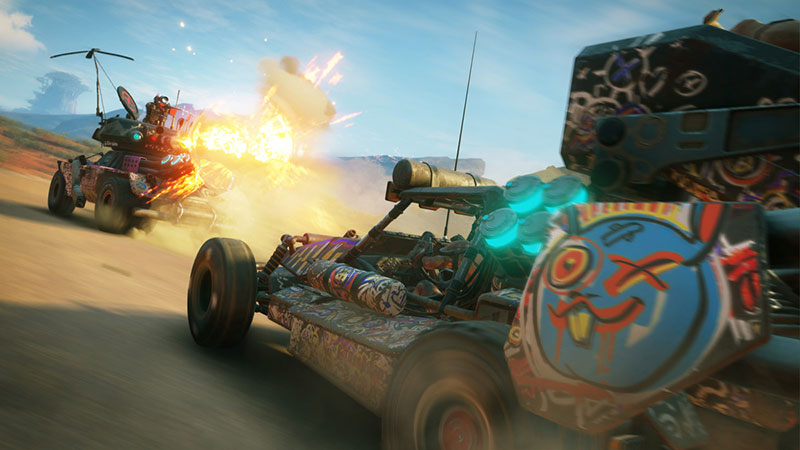 The Rage 2 demo started me off in a junkyard-like setting, where the goal was to infiltrate a nearby “facility” and pose as the President of the United States in order to gain access to…whatever it is I was supposed to be doing there. Really, this was all an excuse to start murdering things, and in that sense, mission accomplished. Hordes of savage goons dressed like futuristic biker gang members soon fell by the dozens under the hail of ammunition spewing from my muzzle, their spiky hair and thick goggles no help against a shotgun blast to the face. In between the cocky insults followed by screams of pain, I couldn’t really decipher what the voice-in-my headset guide was telling me about the story, but who cares? The gameplay feels silky smooth (30 FPS on standard consoles, 60 on the PS 4 Pro/Xbox One X), and the kinetic, frenetic feeling of running and gunning, leaping about the architecture in order to land a devastating ground punch, then charging some poor bastard with a melee attack before chucking my wingstick into his face creates a satisfying ballet of digital death. If Rage 2 manages to keep the cannon fodder coming at a balanced pace, the feel alone should keep players engaged.

At the end of the day, Rage 2 is an over-the-top shooter, and while it doesn’t look to redefine the genre, so far it looks like a very solid addition. Of course, that could just be the free ice cream talking.