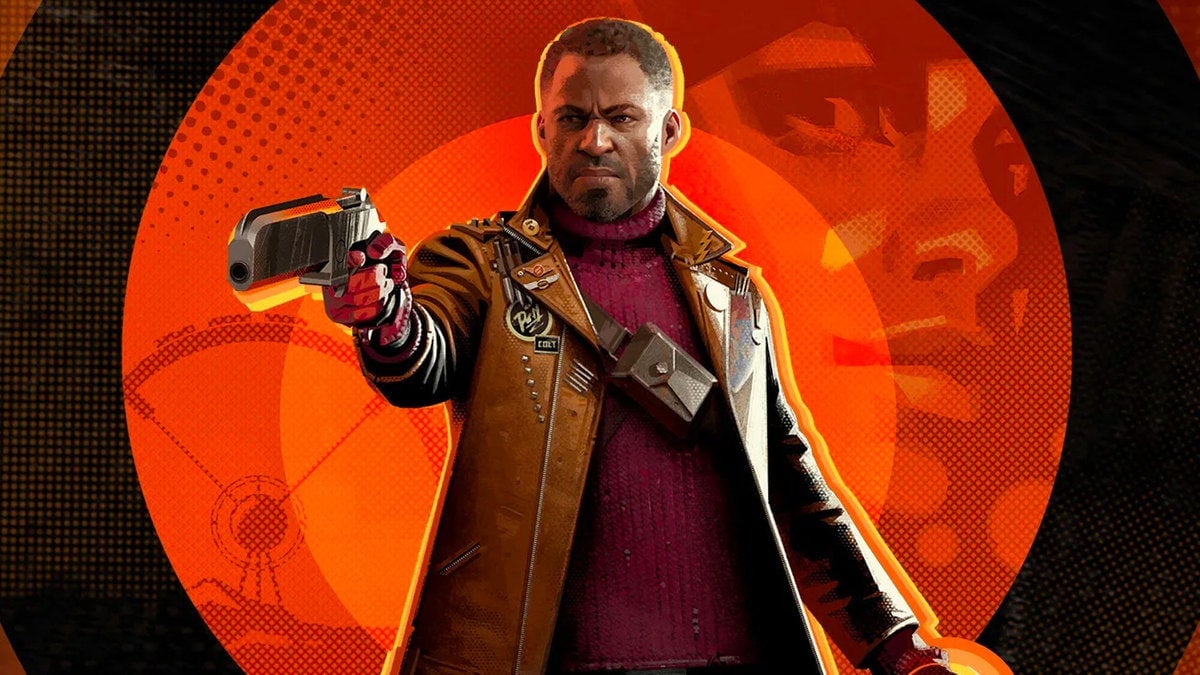 When Deathloop was first released in September 2021, it was met with a tidal wave of 10 out of 10 reviews. Critics across the board absolutely adored it, calling it “amazing”, “sensational”, and a “masterpiece”. But was Arkane Studios’ title really a masterpiece? It was good fun, but in short, no, it wasn’t a masterpiece.

When compared to the other games released at the time, and previous games by Arkane, it didn’t do anything particularly new, noteworthy, or remarkably different. But that also doesn’t mean it wasn’t an enjoyable game.

Not a Masterpiece? Not a Problem.

That being said, Deathloop is a game built with love and care. And it shows. It is a game with a singular vision that, for the most part, the developers refused to compromise on.

Its art direction is perhaps its most standout feature, lending the game a sense of style quite unlike anything else on the market. With its bold colours and ‘60s-inspired décor, Deathloop’s island is a strange mishmash of natural wonders and modernist architecture, complete with swivelling egg chairs and psychedelic wallpaper. Even the hand-drawn cutscenes exude that unique sense of ‘60s charm. Coupled with Arkane’s almost graphic novel-esque graphics style and arcadey movement systems, every frame is a work of art.

Building on from the stories and character work of previous games, Deathloop has the most well-realised, entertaining, and genuinely funny characters of any Arkane titles. And the phenomenal voice-acting only elevates them higher, turning them into real (if incredibly eccentric) characters for the player to root for or against.

Combat is varied, with plenty of imaginative weapons and powers for players to get their hands on and experiment with. And as there is no pacifist option this time round (the villainous Visionaries have to die in order to break the loop and finish the game), creative killing is positively encouraged in place of stealth and hiding in the shadows.

I played the game two months after launch, after the initial hype and fervour wore off, and I remember falling in love with the world presented before me. The combat was slick and satisfying, I got a kick out of sending enemies flying with Karnesis/shotgun combos. And the time loop mechanic (a surprising staple of the industry at the time) held the promise of fun and variety, new challenges and new discoveries, with every reset.

But that’s where the cracks started to appear, and the clever façade broke down to show the surprisingly simple gameplay loop hidden underneath.

Deathloop’s problems first arise when trying to experiment. Right off the bat, the game promises the freedom to do things your way, and while that’s partially true, that freedom of choice only really exists in a small section of the game. The gameplay begins with a lengthy tutorial section that can take players upwards of one hour to complete, depending on how quickly they get to grips with the game’s unique combat and movement, as well as whether they take to the way the story and world-building are drip-fed to them.

Once this tutorial is out of the way, the world does start to open up. The game allows the player to start experimenting, try out new combinations of weapons and abilities, and start looking for the Visionaries they need to hunt and kill. At first, it appears these Visionaries can be killed in any order, in any place, and in any way the player wants. And this is when Deathloop is at its best, when it fulfils its promise and potential, and allows the player to run wild, exploring and finding out how the pieces of the world fit together. But it very quickly becomes apparent that there is only one way to do things. This isn’t a perfect open world of player choice and consequence, but a puzzle with only one solution.

Finding the pieces of the puzzle is great fun – e.g. figuring out how to get two targets in the same location for an easy double kill, or how to get another out of hiding and into the open to take them out – but once those pieces are found, the thrill is gone. There is only one place and one time of day to kill each Visionary and fit them all into a single loop. Deviate at all from this golden path, and players can’t finish the game. By the time I had found all of the pieces and figured out the correct order to everything, I had killed each Visionary a dozen times over already, and doing it all again in a very specific order felt rote, like I was following a set of instructions rather than figuring out a solution for myself.

Of course, while the time and location may be fixed for the final showdown, the method by which players may decide to off their targets is still open to personal preference. There are many ways to take them down, but they still feel limited compared to games like Dishonored. For one, while using powers to kill is encouraged, only two abilities can be equipped at one time, meaning players have to be tactical with which they choose, but also limiting experimentation and restricting opportunities to play the abilities off each other. Players tend to find what they like early on and never bother changing their loadout from then out, which only sends them down the rote, tick-off-the-steps style of gameplay sooner. The powers are also, unfortunately, not as interesting as those found in Arkane’s older games. This, unfortunately, leads to burnout and discourages replaying once the credits have rolled.

What Could Have Been

Arkane’s older games felt less restrictive in comparison. Dishonored 1 and 2 are endlessly replayable. Each level feels totally unique, with wide-open sandboxes complete with enemy AI and environmental hazards to exploit, or mind-bending gimmicks – like the Clockwork Mansion or the time-hopping ‘A Crack in the Slab’ – which engender fast-paced, think-on-your-feet puzzle-solving. All abilities are available at once when unlocked, and they all play off each other perfectly, allowing truly canny players to pull off gravity-defying trick shots and complex domino-effect chain kills that are a marvel to behold. Kills are open-ended, too, inspiring players to find the fastest way to off their target, the most stylish, the most bombastic. Or, even to complete the entire level without killing a single soul.

Arkane’s Prey, while not in the same vein as Dishonored or Deathloop, still allowed players to experiment with powers and traversal. Prey’s Talos 1 space station is effectively one large, open sandbox, with multiple paths to reach each area. In this game, players use their weapons are powers to kill enemies, naturally, but also to explore. The mimic ability allows players to transform into everyday objects, and if these objects are small enough, players can slip through bars, roll under locked doors, or slide through vents to reach previously inaccessible areas. Similarly, the GLOO Cannon fires sticky blobs that harden into solid platforms when they strike a surface, meaning very careful arrangement can create walkways and staircases that allow the player to reach all sorts of places that they normally shouldn’t be able to reach. This results in some real “Eureka!” moments and makes the player feel as though they have outsmarted the developers.

Deathloop, then, should have been the culmination of everything Arkane had learnt from their previous endeavours. It should have been the perfect balance of Dishonored’s combat and Prey’s traversal. A game more open the Dishonored, and more creative than Prey. But the game players got fell short of that expectation.

The Price of Ambition

That wasn’t, however, due to any lack of trying on the developers’ part. If anything, they were far too ambitious for their own good. The problem was, initially, the game was too open. Players were given too much freedom and no guidance on what to do. This was supposed to instil a feeling of adventure and discovery, but instead, playtesters felt frustrated. They didn’t know where to go or what to do and just ended up feeling lost and confused.

So, Arkane went back to the drawing board and introduced a lengthy guided tutorial section at the start of the game. On the plus side, this gave players a sense of purpose, a goal to strive for, but it also made the beginning feel a little too hand-holdy.

Another problem arose with the game’s various systems, another unintended by-product of being too ambitious. Playtesters didn’t intuitively understand how the time loop itself worked, how to move time along, or how to keep weapons and abilities between loops. And so, Arkane had to go back to the drawing board again. This time, they implemented new tutorial menus, pop-ups, and tips. The result was, players now understood how the game worked, but it came at the cost of freedom.

The tutorial menus and pop-ups combined with the guided tutorial opening resulted in a very stilted and restrictive opening couple of hours. And for a game billed on its open-ended player choice, it was enough to put many players off. Thankfully, the game opens up from there, and while it does close itself off again towards the end, there are a fair few hours of fun to be had in the middle. That is where you will find the Deathloop that was promised – where the island is still fresh, the powers are new and exciting, and the whole thing comes together as one big playground of discovery.

So, is Deathloop a masterpiece? No. But it came out at a strange time. It was still the early days of the latest generation of consoles, the pandemic meant many of the games slated to release that year had been delayed, and so Deathloop emerged into a vacuum. It was a great game – one of the best released that year – but as there were so few others to challenge it, its merits were difficult to put into perspective, and with a little hindsight, it’s clear to see many reviewers overreacted.

Even so, that doesn’t mean it isn’t worth a few hours of your time. So, give it a go, temper your expectations, and have fun. Because Deathloop is so much better when you see it for what it is – a stylish, well-written puzzle box that will entertain you for the weekend, but won’t ever take your breath away.