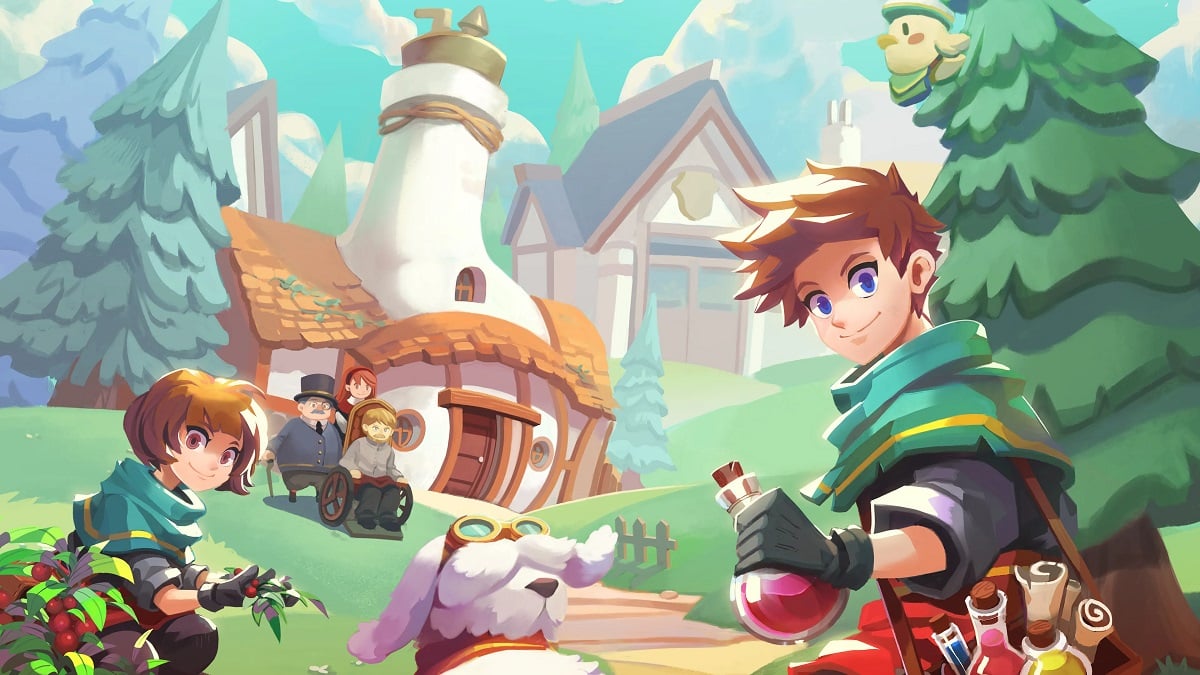 Though Harvest Moon was the first to popularize the formula of building up a home, socializing with quirky villagers, and establishing yourself in a town through hard work and relationship building, it was Stardew Valley that redefined the genre and took it to new heights. Out of all the countless indie titles that’ve come out since and tried to recapture that Stardew magic, Potion Permit is perhaps the most polished and well-designed of them all. It wears its inspirations on its sleeve, but it also innovates and takes some much-needed lessons from its predecessors.

Though it eventually finds its footing, Potion Permit makes a rather sour first impression. The premise is engaging: the daughter of a small town mayor has come down with a mysterious illness, and as an accomplished chemist you’re sent from the capital to treat her. Once you arrive, you’re smacked in the face by cold, hard reality: thanks to the disastrous actions of a previous chemist from the capital, the entire town both hates and distrusts you. From that point on, it’s your job to prove your worth through hard work and reliably healing the townspeople.

While going into the town with a chip on your shoulder is a nice change of pace for the genre, Potion Permit is slow to get off the ground. Conversations with anyone for the first few days result in the same dismissive lines about chemists and the capital, and there’s no way to actually start building a relationship with them until the story has progressed. Large swathes of systems are gated off in a similar way, including most ways to make money (i.e. taking on odd jobs around town and selling potions). This combined with the general sentiment that everyone hates you adds up to a less-than-fun first hour or two.

Thankfully, once the systems open up and characters actually begin emoting and showing their personalities, Potion Permit quickly comes into its own as a progression-based life sim with a medical twist. Though initially hired as a chemist, the player also acts as a doctor, juggling the duties of both brewing medicine and treating patients at a clinic next to their home.

Potion brewing requires manually going out into the wilderness, fighting beasts, and collecting ingredients before bringing them back home to mix into various concoctions. Interestingly, instead of implementing ingredient rarity and uniqueness to make potions, Potion Permit handles the process by assigning ingredients certain shapes that need to fill in the larger overarching shape of the potion at hand. It’s a streamlined take that’s simpler than, say, alchemy in the Atelier series, but it’s also more approachable and easier to understand.

Townsfolk go to the clinic on their own and await your evaluation first thing in the morning. Diagnosing patients is as simple as playing a short mini-game to uncover what the issue is, at which point a potion can be applied on the spot or brewed back at the house. The entire system is extremely easy to manage (at least in the early game) and leaves valuable time for scavenging and socializing around town.

Much like its predecessors, the true draw of Potion Permit is a steady drip-feed of progression through upgrading. Everything from the player’s tools to their house and the clinic itself are in a state of disrepair when first starting out, and only through the gradual process of scavenging for materials and completing tasks for villagers can things be upgraded. The grind is intense, especially in the beginning when potions can’t be sold and tools are weak and inefficient. Eventually, however, farming sim veterans are sure to fall into a natural rhythm of efficiently managing their time and planning out their days in advance according to when certain shops are open and certain activities are available.

The other main attraction of the life sim genre is the social events and relationship-building with townsfolk, and Potion Permit manages to pull its weight in this regard. Cutscenes are directed well and there’s a wide variety of people to get to know around town (some more flirtatious than others). The only major downside is that it takes quite a bit longer to grow close to most characters because players start with a negative impression as opposed to a neutral one. And, like Stardew before it, triggering social events is still a toss-up in terms of knowing where to go when to make them start.

Potion Permit is a unique twist on a beloved formula, but it may not deviate enough for some. It’s beautifully animated and written quite well, and the sheer number of characters to meet and learn about (around 30) is as strong an incentive to keep coming back as the satisfying process of working towards house and equipment upgrades.

At the same time, performance on Nintendo Switch is a bit rough, with frequent slow down and a couple bugs that pop up during specific activities. It was never enough to ruin my experience, but it was enough to become annoying after a while. If you’ve been itching to get lost in a new town with a new cast of characters, Potion Permit scratches that itch. Just be prepared for a slow start and long grind towards success.