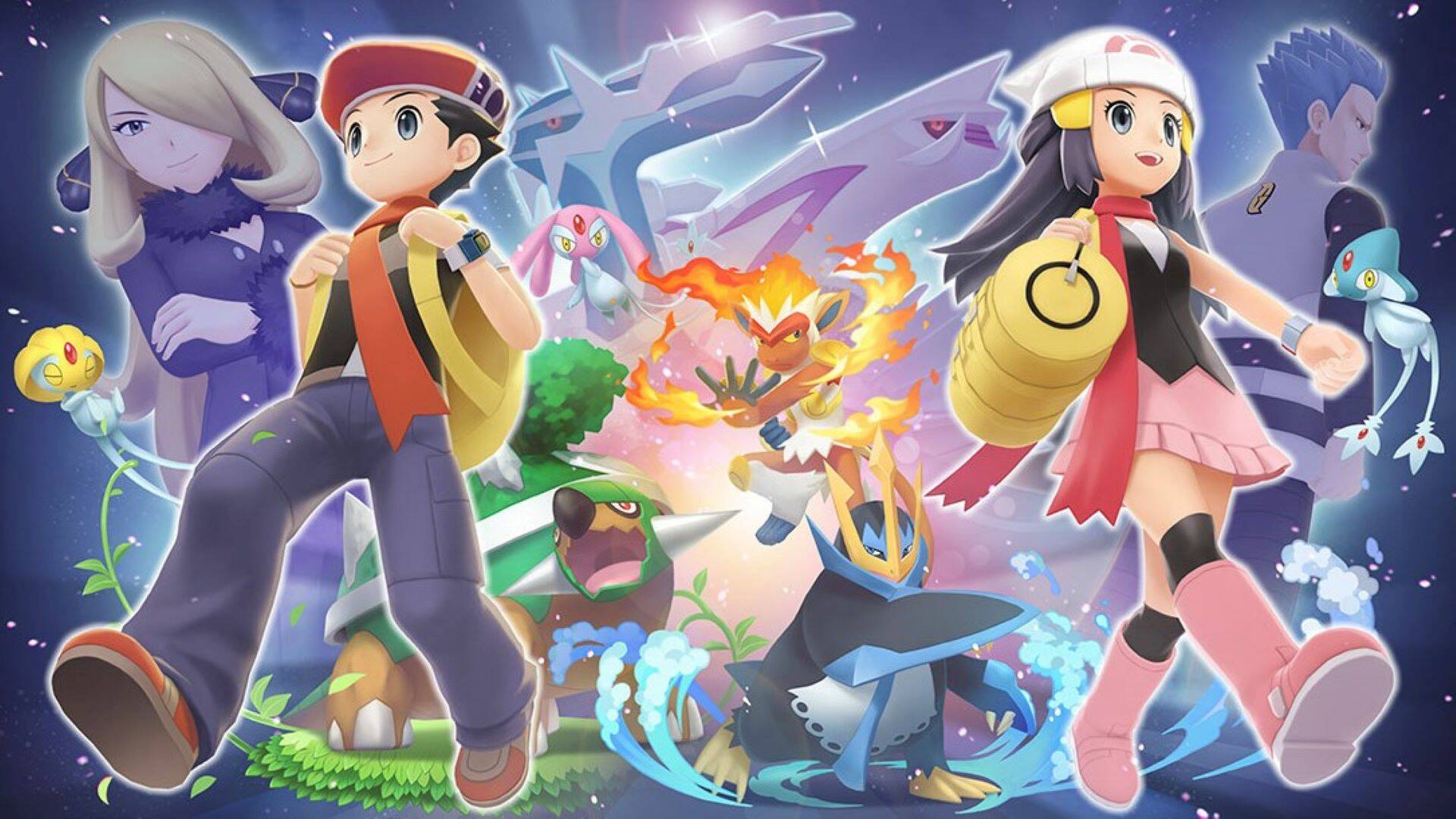 Despite their recently divisive ventures into the franchise, Game Freak has undeniably triumphed in recreating Pokémon’s older generations for modern hardware every few years. From FireRed & LeafGreen to Let’s Go Pikachu & Let’s Go Eevee, the leading Pokémon developer has remained on a hot streak creating compelling remakes of its original monster-catching hits. For all the flack Game Freak gets nowadays, it’s hard not to say that ILCA’s Pokémon Brilliant Diamond & Shining Pearl can feel like a plunge backward when compared to the franchise’s prior nostalgic re-outings. For the outsourced developer’s first real Pokémon game, the long-awaited reimagining of the Sinnoh region sits on a fascinating place within the franchise’s time and space.

That’s not to say Pokémon Brilliant Diamond & Shining Pearl are bad games by any means — in fact, they are great entries in the series, but perhaps not the most exceptional second comings to experience. The latest remake of the Sinnoh region adds a luminous coat to Diamond & Pearl with quite a few noticeable scratches. The result is a remake comparable to a coarse gem–a nice treasure to gander at, but something with quite a few rough spots to get past. As remakes, both games are not exactly brilliant, but their old and even new content are still shining. Pokémon Brilliant Diamond & Shining Pearl tread a fine line between being what fans of Sinnoh want and what they feared most.

Stuck in a Timeloop

At its heart, Pokémon Brilliant Diamond & Shining Pearl still upholds what fans love about the fourth generation of the franchise. In some instances, it even continues to build upon itself with the needed introduction of refined features from recent games. The Pokédex and iconic trainers of Sinnoh are back, the music has (mostly) been reorchestrated to incredible heights, the underground is larger and more immersive than ever before, and the main adventure is still a complete blast to partake in. Brilliant Diamond & Shining Pearl are far from soulless remakes, but they do take missteps in unearthing that magical experience from Pokémon’s peak. The number of contradictions in its design is baffling and makes Game Freak’s remakes from years past look years ahead of their time.

Pokémon Brilliant Diamond & Shining Pearl are not even debatably remakes of 2006’s Pokémon Diamond & Pearl — calling this release a “remake” is a problem in and of itself. They are almost one-to-one recreations of the original Nintendo DS titles, yet they do have numerous design and quality of life changes that attempt to improve the experience. While some of these alterations are absolutely welcoming, others will have players wishing that the Sinnoh region had been brought back to life in a completely different way. For every step forward Brilliant Diamond & Shining Pearl take, they can fall back to the floor hard with a questionable screwup. The games are constantly at odds with themselves as they attempt to modernize old titles that perhaps may work more efficiently than their newer counterparts.

Why is it that HMs no longer have to be taught to a Pokémon in the party, but TMs can only be used once before breaking? Fairy-type was added to this iteration of generation four, but why does the game not accommodate for its power and usage? Why does the game have random encounters on the surface world but not in the underground? How come there is only one Pokémon per HM animation when the last remake had multiple? Most importantly, why do players have a new control scheme when the world is still on a grid-based structure?

There are so many ways in which Brilliant Diamond & Shining Pearl can improve upon the original Diamond & Pearl, and yet the majority of the new changes come with strange drawbacks that can hinder the overall experience. Potential game-changing features are easily swept aside because of silly mistakes on ILCA’s behalf, leaving players with a game that worked better fifteen years ago.

Pokémon Diamond & Pearl‘s main intention was to expand the world, characters, and activities Pokémon had to offer rather than the fluid grid-based structure and battle system that already worked perfectly. Outside of the obvious graphical upgrade and Pokétech Watch dual-screen implementation, the titles were not a massive leap forward for Pokémon on a technical perspective outside of the online features. From the way the new remakes play and look, a lot of Brilliant Diamond & Shining Pearl’s mistakes are just baffling design decisions that have no reason to be present. These remakes often derive most of their problems from not changing the mechanics of the mainline Pokémon games prior to the 3DS.

Pokémon Brilliant Diamond & Shining Pearl do not accommodate for modern changes to the franchise — especially when it comes to world design. The core content is still as phenomenal as ever, but for a game that almost utilizes everything but the skin of its original counterpart, it is incredible to see how many small issues manage to pile up. While the art style can be in distress at times with no clear direction, the game has far larger issues at hand that never existed in the original Diamond & Pearl–issues that are only present because of how a modern headspace was slapped onto something built entirely differently.

Giving players the mobility to move in every direction has hindered and benefited the original’s flawless controls in minor ways. Unlike Omega Ruby & Alpha Sapphire and Let’s Go Pikachu & Let’s Go Eevee, these remakes have a massive control problem that has not been thoroughly touched upon. At the very least, ILCA did manage to counteract ways of the player soft-locking themselves in an area by having opponents respawn on a select grid space after a battle despite where their fight was initiated.

Where Pokémon Brilliant Diamond & Shining Pearl will of course become a hot debate is its visuals. While the graphics are fine, perhaps they are just a bit too gripped to the original’s portrayal of the Sinnoh region. The game does and does not feel like it captures Game Freak’s initial imagination aesthetically. The limitations of Nintendo’s handheld hardware up until the 3DS are what lead to Game Freak’s iconic “chibi art style.” It was the best possible way to portray overview sprites as the developers envisioned them, but that stylization was clearly not how Game Freak saw Satoshi Tajiri’s world of Pokémon. The reimagined visuals that harken back to the old-sprite work can be cute but are also disappointing when compared to the artistic direction the franchise has taken — even with its most recent remake, Let’s Go Pikachu & Let’s Go Eevee.

The game definitely looks more natural during the battle sequences, but disappointingly, many fights have abandoned the action camera style perspective that Pokémon X & Y first adopted. Out of all the changes made to the presentation and fluidity of the battle system, it is incredibly strange to see how flat and unengaging some matchups can look. There are certainly select atmospheres with several background elements going on, but the vast majority of wild battles consist of staring at the backs of a player’s Pokémon and a few still trees. For the best-looking part of the entire release, the presentation of most battles culminates into an annoying massive tease from the developer of what could have been.

At the end of the day, Pokémon Brilliant Diamond & Shining Pearl have landed more than solidly but will leave many long-time fans of the Sinnoh region wanting so much more. In the same fashion as Pokémon Let’s Go Pikachu & Eevee, long-time fans will have a lot to smile at when playing through Brilliant Diamond & Shining Pearl. However, they do not feel entirely at home with their 2006 counterparts. Whether or not the nostalgia will wear thin and begin to seep through the cracks of some rather poor design decisions will entirely be up to the player. In its final state, generation four’s remakes are perfectly okay recreations of a phenomenal game, but they could have been reimagined on a larger spectacle. It is hard not to walk away as the champion of Sinnoh once again and think about what ILCA could have made had they not been so focused on quite literally recreating the masterpiece region.