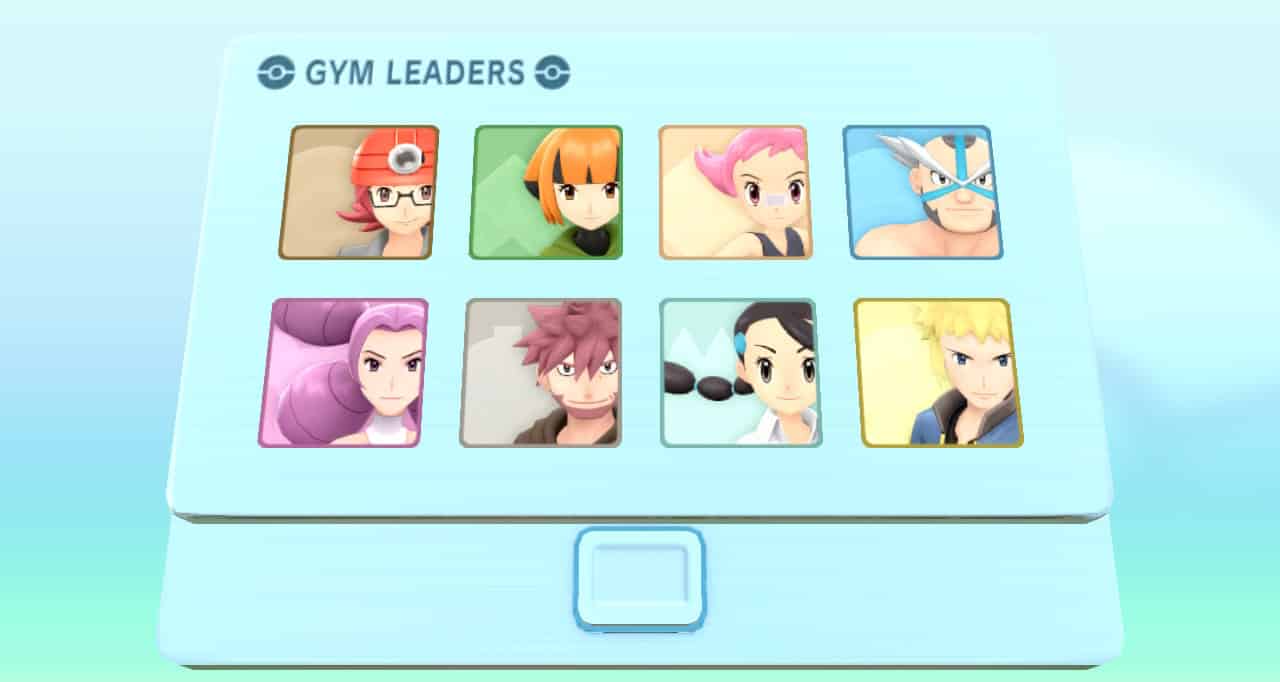 Every trainer’s dream is to embark on Victory Road and stare down the faces of a region’s Pokémon masters. While they arguably are not the most iconic batch of eight trials from the franchise, the Sinnoh region does offer quite a substantial lineup of gyms to conquer and leaders to fight before taking the throne of the world champion. The minor league of bosses may not be as recognizable or thrilling as what Cynthia and her Elite Four counterparts offer, but they do stand strong on their own prior to the epic championship battles. This is our ranking of Pokémon Brilliant Diamond & Shining Pearl’s eight gyms and their leaders.

Being the first gym leader the player encounters, Roark should have just handed over his badge while he was still deep within the Oreburgh City mine. Due to how fast the player can gain experience during the opening hour of Pokémon Brilliant Diamond & Shining Pearl, the Rock-type opponent provides almost no challenge whatsoever. Every starter can quite literally gain an advantage over him; it only takes a level twelve Piplup, Turtwig, or even Chimchar to completely best the Geodude, Onix, and Cranidos trio. With by far the dullest gym setting in all of Sinnoh and a small team showcasing only one regional Pokémon, there is no debating why Roark would be the rock bottom pick of the eight badge holders.

Being the Grass-type gym leader, Gardenia was of course going to face a barrage of balancing problems as her team contains the most vulnerabilities. Even though Gardenia’s team gives it their all, the Pokémon chosen for her gym can be decimated in one fell swoop by simply bringing along any species that can learn a Flying or Fire-type move. Her hide-and-seek-like gym concept is a neat, albeit extremely simple obstacle to encounter that at least gives her an advantage over Roark’s bare-minimum threat of a staircase. It is a shame that her lead typing was not combined with poison or bug for a hint of challenge, but Gardenia’s setting and tedious child’s game provide an ample amount of experience points and memories. Admit it, some of those trainers are well hidden if you do not read the hints!

With one of the most lackluster gym settings and puzzles to offer, Fantina herself is a huge saving grace for Hearthome City’s Ghost-type domain. A rather oddball fashion design and speech peppered with French easily make Fantina stand far apart from the rest of Sinnoh’s gym leaders. Even then, her surrounding elements pull down her main appearance. Even with a serious challenge to overcome and one beautiful-looking battle backdrop littered with stained glass, the Hearthome City gym has some baffling design choices. Seriously, math equations? Could the developers not implement questions based on Pokémon typing or even evolution and items like Blaine’s gym in the Kanto region? For such a great gym leader, the buildup to Fantina’s footsteps is practically laughable in the face of her own battle and character.

Maylene has what it takes to be a great Fighting-type Pokémon gym leader, but the one key feature she lacks is a true personality. Her dojo-esque location shines from the rest of the gyms both esthetically and contextually. It teaches players the importance of the HM strength mechanic long before its first usage kicks in. Best of all though, there is an actual challenge to face during the final confrontation. Maylene’s Lucario can be a serious uphill battle for players lacking a Fire-type or Ground-type on their team. Clever trainers will be able to knockout Lucario with some timely shots by nabbing TM28 Dig, but overall, Maylene’s fight for the Cobble Badge is quite the early thrill Pokémon Brilliant Diamond & Shining Pearl needed.

With his giant physique and outgoing characteristics, it would only be natural that Crasher Wake would uphold some of the largest and strongest Pokémon within Sinnoh’s eight gyms — Gyarados, Quagsire, and Floatzel is quite a Water-type combo to face before the game’s halfway point. The atmosphere of Crasher Wake’s battle though is unquestionably a highlight as he offers one of the most mesmerizing and transformative battle backdrops of all the gym leaders. As the player slowly battles their way to the boss, the location’s background waterfall gradually becomes more rampant and overpowering. Out of all of Sinnoh’s gym leaders, Crasher Wake definitely is one of Brilliant Diamond & Shining Pearl’s outliers that helps maintain a sense of just how much more intense badge-collecting will get.

Stuffed away under a blizzard at the top of the Sinnoh region’s mainland map, Candice’s Snowpoint City gym holds one of the trickiest yet comprehensive puzzles for trainers to best in Pokémon Brilliant Diamond & Shining Pearl. She may still not look like much of a leader and has an Ice-type team with nothing too difficult to overcome, but the mental obstacle players fight before battling her is nothing short of a clever puzzle that only looks easy on the eyes. It is disappointing that a decade’s glowup did not help advance Candice’s style or difficulty, but her home turf certainly has aged well in terms of complexity and aesthetics. It applied back in 2006 and still does today; be sure to just save before fighting Candice because you do not want to get too excited, lose, and have to restart her snowball puzzle from step one.

Being the second Steel-type focused gym leader, Byron plays an interesting challenge in having to be designed around the Pokémon franchise’s outlier element. Not only did Diamond & Pearl introduce barely any new species part of the type category, but very few older Pokémon merged into it. Despite the lack of options, Game Freak and ILCA managed to create one of the Sinnoh region’s most memorable gym leaders because of his design and location. The elevator set-up in Byron’s gym is wacky enough to give players some quick and minor speedbumps but also feel like a satisfying journey to the top.

Looking back on his gym, though, developer ILCA could have easily updated some Pokémon typings to give this gym a greater challenge — count a poké ball for every time you see an Onix and you could probably catch the legendary on the game’s cover with that amount of Ultra Balls.

Pokémon Brilliant Diamond & Shining Pearl’s gyms keep getting better for the most part, and luckily the game’s last gym leader ends its badge collecting journey on a high note. Volkner is a worthy challenger for the player to stand up against before they can embark on the final chapter of their main adventure to become part of Sinnoh’s supreme. Packed to the brim with moving walkway puzzles built on metal cogs and Electric-type trainers, Volkner’s home gives players the opportunity to gain quite a bit of last-minute experience points before the confrontation for the Beacon Badge begins. With a team consisting of Pokémon with different types who can happen to use Electric moves, Volkner provides a welcoming transition into the upcoming battles the player will have to defy.