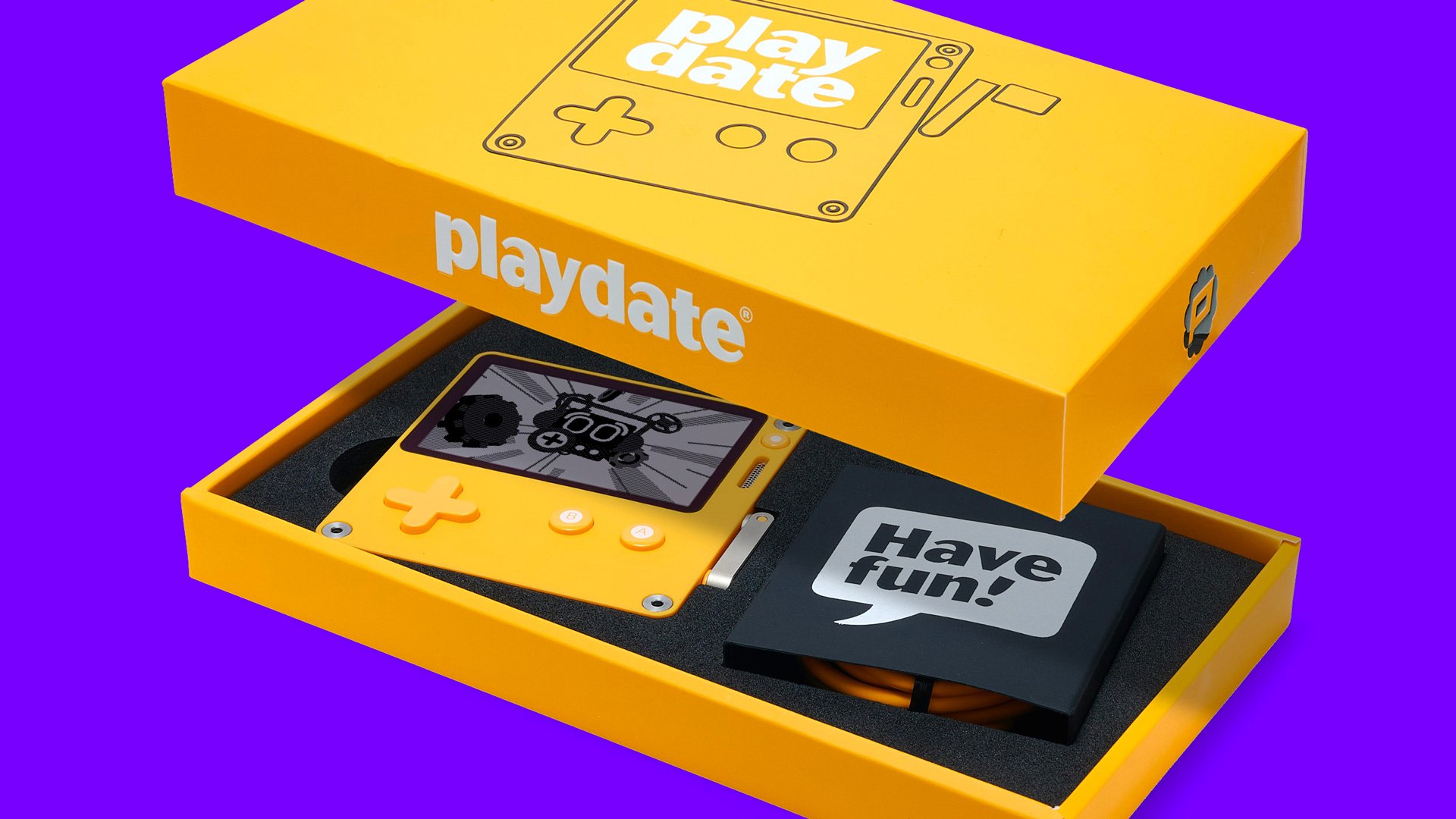 It is easy to feel exhausted by video games as a medium.

There is always a constant rush to stretch current hardware to the limit of its capabilities, pushing developers to the brink. There’s an over-reliance on established IP, leaving independent creators little margin to make a living for themselves if their games don’t star Mario, Kratos, Master Chief, and the like. It often feels like the major players in the industry simply don’t care about their legacies, with companies like Nintendo and Sony often making questionable choices that leave fans feeling frustrated. Even for optimists, to love video games and to be interested in how they’re made can be a complicated relationship.

But even in this fractured (and often exploitative) industry, something can be created out of pure passion. Playdate, the nifty yellow handheld developed by Panic in conjunction with Teenage Engineering, has finally arrived after an arduous journey, and it is more than worth the wait. At first glance, it seems like the appeal of Playdate is limited. The screen is small, with a black-and-white display, hardly a standout in the age of the next generation. No major publishers have announced any kind of killer app. But Playdate has a certain allure. A pocketful of joy that radiates positivity from its design aesthetic to its game distribution, Playdate is sure to make even the most jaded consumer crack a smile. While the audience for this device is minuscule compared to the wide appeal of a Nintendo Switch or even Valve’s Steam Deck, playing on Playdate is an experiment that, so far, seems to achieve its goals.

Panic, the creators behind Playdate, had a seemingly solid plan to produce their new handheld. But the best-laid plans, as they say, often go awry. Playdate had a splashy announcement video and then almost immediately ran into production issues, which, combined with the ongoing COVID-19 pandemic, delayed the release of the device into the spring of this year. Those who preordered in the summer of 2021 are only just now receiving their devices. Fortunately, for a certain type of gamer, Playdate is worth the wait.

On a physical level, it is difficult to talk about the Playdate without mentioning just how small it is. The entire handheld can fit in the palm of an average-sized hand. It is thin, perhaps half an inch thick, and the screen is a mere 2.7 inches across. It feels impossibly little, and distractingly cute, all yellow with steel highlights. The easiest way to describe it would be “toylike,” but this is hardly a pejorative. Picking up and holding a Playdate feels like stumbling across a forgotten Tyger electronics device in the shoebox of your childhood home. You can’t help but turn it on, press a few buttons, and give the crank a spin.

Because Playdate, as much as it resembles a Game Boy, has one incredibly unique feature that makes it stand out from any other video game console: a tiny, foldout crank. The crank is easily the most notable feature of the Playdate. Its use is limited only by the imagination and ability of developers; in the hands of Keita Takahashi, the creator behind Crankin’s Time Travel Adventure and a standout of Playdate’s first season of downloadable games, it feels almost revolutionary. One of the more interesting facts about the Playdate is that not every game featured in the first season makes a case for the crank. When the crank is incorporated well, it feels essential, but occasionally it feels superfluous. The D-pad and face buttons feel pretty standard, but factor in the crank and some games start to feel like an ergonomic nightmare.

Overall though, Playdate feels solid, a sturdy piece of electronics. It is small enough to throw in a pocket or purse and doesn’t feel delicate like an iPhone. The buttons are clicky and responsive, and the way the crank can be folded away when not in use is ingenious. Handheld fans will scoff at the lack of a backlit screen, but the screen is reflective enough to catch even the dimmest light. Perhaps Playdate 2 will take notes from the GBA SP and feature a backlit screen, but early adopters will have to make do.

Part of what makes Playdate such a unique experience is the enthusiastic community. To be an early adopter of Playdate is to join a group of extremely passionate individuals who are excited by the potentiality of the device. If nothing else, Panic has bet it all on novelty, and on that front, Playdate delivers.

“Yeah, but Does It Have Any Games?”

Like an Xbox Series S or the digital-only PlayStation 5, Playdate can only play digital games. There is no cartridge slot, and considering the entire device is smaller than the average floppy disc, absolutely no way to play anything off of a blu-ray. Playdate uses a digital delivery system, drip-feeding a selection of games over a period of time. This “first season” (included with the purchase of the console) consists of 24 games delivered over the course of 12 weeks, coming two at a time once a week on Mondays from the moment players connect the device to wifi. The delivery system feels almost like a book club, a curated list of games and experiences that aim to showcase originality. The entire list of games is available to browse online, but players will have to be patient to experience the entire season.

People are not limited to these 24 games. Panic has committed to allowing anyone to make games for Playdate. There is a development kit easily available for those feeling inspired, and running an emulator on a computer is extremely easy. One of the most enjoyable experiences of having a Playdate so far is seeing what the community is cooking up, and browsing itch.io for something new. The indie scene seems to be embracing the device wholeheartedly, but time will tell if new games for Playdate continue to be developed over time.

To wring the most out of Playdate, gamers will have to become comfortable with concepts like sideloading and accessing the data disc of their console. These concepts might sound scary, particularly when part of the appeal of console gaming is its pick-up-and-play nature, but the Playdate community is eager to help each other. It might seem simplistic, particularly for the tech-savvy, but it can be very empowering to research an indie game, download it, figure out how to extract the appropriate files, and sideload them onto Playdate.

As it stands, excitement is high, and there are all kinds of unique experiences available for those willing to look. There are dozens of first-time creators doing their best, and even darlings of the indie scene like Lucas Pope (Return of the Obra Dinn and Papers, Please) have said they have projects in development for the Playdate. Someone even developed a Pocket Reader, which can display .txt files on Playdate’s screen (and yes, the crank is used for scrolling through text). If you’ve ever wanted to read Moby Dick in a way Herman Melville could never have dreamed, browse the titles available for download on Project Gutenberg and go to town.

As the first season goes on and more games become available to download, Playdate starts to feel almost like an art experiment. Some of these games are hardly games at all, but rather just fun, bite-sized experiences. Take Boogie Loops, a music creation tool that draws heavy inspiration from Mario Paint. Is it a game? Not really; if anything, it’s merely a showcase for Playdate’s surprisingly powerful sound chip and an excuse to see some adorably animated animals dance and dab on the tiny screen. This is not to say that the games available on Playdate aren’t mechanically rich or robust in their own way, because some of them absolutely are. But those looking to scratch a narrative itch won’t find much fulfilling here, at least, not yet.

Playdate is an undeniable niche device. Compared to other handheld consoles out there, it can’t do nearly as much. The pricing may be prohibitive, especially for gamers on a budget; for the price of Playdate, its little magnetized screen cover, and shipping, someone can pick up a Nintendo Switch Lite and a copy of Hollow Knight or Stardew Valley and be set for the next hundred hours. Then again, those who are intrigued by Playdate are likely people who already have a dedicated gaming console, and who want to experience something entirely new. Playdate delivers that novelty.

It is impossible to see where development for Playdate will be in a few years. Nothing is known about future seasons of games, or if there even will be future seasons. It is possible that Playdate will only live on as an expensive novelty, kept alive by itch.io and a handful of diehards. But being along for the journey is an experience all its own.