Of the roughly fifteen games Nintendo developed for the Wii U, perhaps none are as mistakenly overlooked as Pikmin 3. Of course, it’s not surprising that an underperforming entry of a niche franchise on a flailing console failed to set the world on fire. Yet while other AA Wii U games such as Captain Toad: Treasure Tracker and Donkey Kong: Tropical Freeze have been given a second life on the Switch, it remains unclear if Pikmin 3 will ever see the light of day again. Meanwhile, the fate of the franchise is equally unknown, despite series creator Shigeru Miyamoto famously stating development was near completion years ago. In honor of this underappreciated gem and the series devotees who were strung high and dry at yet another E3, I will be harnessing 100/100 of my analytical prowess to burrow into Pikmin 3’s design level-by-level. In this entry, I will take a look at the game’s fourth course, Twilight River. 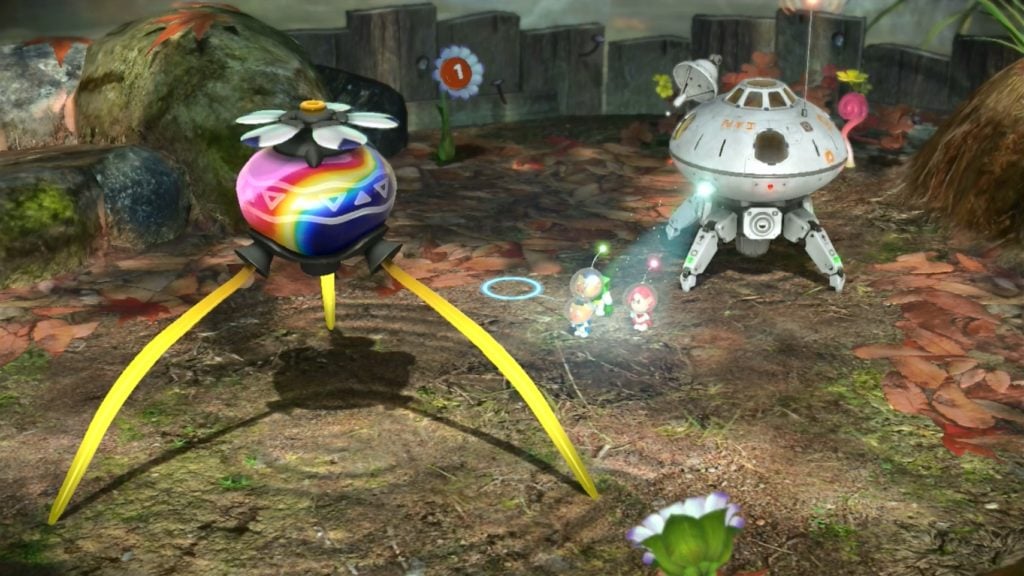 After chasing an errant signal to the Tropical Wilds , the crew chases another signal to Twilight River in hopes of finding Olimar, who they believe took their Cosmic-Drive Key. Eventually, they battle a boss at the top of a tree stump and find Louie, who they think is Olimar. They bring him aboard and later that night he steals their juice and runs away to the Garden of Hope. The justification for visiting the Twilight River is a bit of a red herring (as is often the case), and in terms of the plot nothing significant happens here outside of saving Louie.

Twilight River is an autumnal river basin where the leaves of deciduous trees litter the floor and the lighting is always magic hour. It might be the most beautiful region in the game from a purely aesthetic perspective, but it remains similar enough to the Garden of Hope to occasionally feel like a seasonal slant on that level rather than its own region in another part of the world. Still, Twilight River’s laid-back vibe matches its temperate pacing, and there are no silly shoehorned puzzles that don’t match the theme. Indeed, the only light puzzles are oriented around map-specific traversal like the lily pads, which lend the level far more of an identity than it would otherwise have.

The Twilight River has one very large central area that is sort of divided into four by a river and pipe/passageway above a wall. Parts of this central area are unlocked piece-by-piece in a clockwise motion, typically by gathering bridge tiles or changing the path of floating lily pads. In addition to this central area there is also a large tree stump where the boss fight takes place and a small one-room cave to the north. Although navigation can be a little bit difficult toward the beginning (when players might stumble learning how what they see on their lily pad rides pairs up with what they have accessed on land), the level does a good job of balancing openness with linearity. There is usually an objective at hand guiding the player, but there are multiple directions the player will have to go in to accomplish that objective. This design perfectly suits the character swapping mechanic, which most players will be sure to take advantage of here not because it is mandatory but because it is so advantageous.

Twilight River’s main theme is its fall setting. In fact, we could retroactively view each of the game’s four main stages as emblematic of a season (the Garden of Hope as spring, the Distant Tundra as winter, and the Tropical Wilds as summer). Unlike the scattershot Tropical Wilds, Twilight River presents a tiny array of settings, but in doing so establishes its environment through consistent art, color palette, and enemy selection. It seems like a bit more could have been done procedurally, but the lily pads that define the level are perhaps the most relevant level-specific mechanic in the game. They perfectly match the level’s theme while also allowing players to move across water, ensuring that water doesn’t just act as a way to gate off content (although there is still a bit of that), and that the rivulets feel like an authentic part of the level. There are a couple hiccups in practice: It’s not as clear as it could be lily pads are being diverted by a branch the player can lift, and it is too easy to leave Pikmin behind while jumping on a lily pad. Still, this is arguably the most meaningful integration of theme and mechanics in the game. 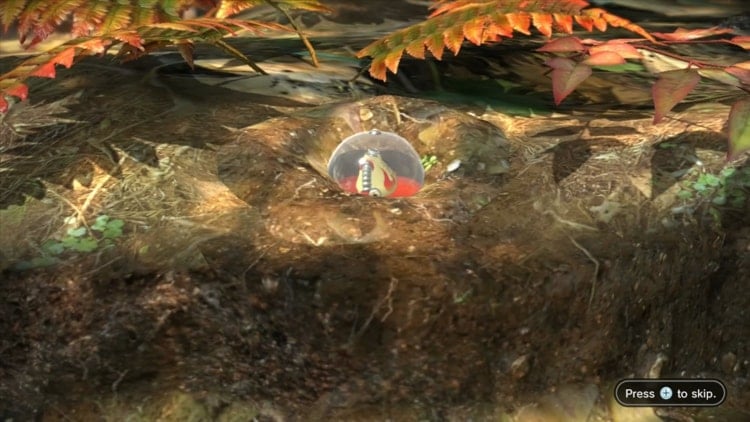 The storied Winged Pikmin introduced here absolutely steal the show. These pink revelations alter almost every aspect of the game, from carrying carrion back to the Onion on their own specific path, to attacking flying enemies other Pikmin can’t, to plucking Flukeweed. More so than any other pikmin type, Pikmin 3 (and Twilight River in particular) feels designed with Winged Pikmin in mind. Twilight River is also home to the Scorch Guard, a suit upgrade that allows crewmates to walk through fire. It’s slightly more useful than the Anti-Electrifier, but it’s still barely worth the time it takes to collect. Furthermore, it is terribly placed above a ledge in a dirt pile that’s nearly impossible to see. As bad as the Anti-Electrifier placement is, this is outright pathetic. 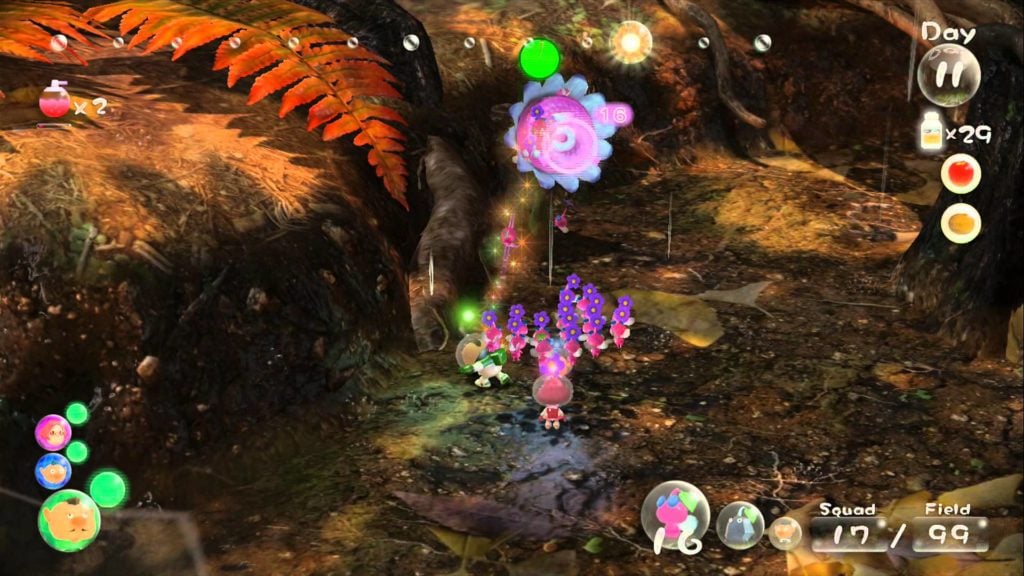 Twilight River is home to only sixteen enemy variants, by far the smallest of any of the four main levels. Yet since five of them are unique, and those unique ones are shrewdly designed, well-placed, and reused multiple times, combat here feels much different than in previous levels. This is in no small part due to the battles designed around Winged Pikmin, especially the Arachnodes, which are singular encounters and a thematically apropos way to balance Winged Pikmin (even if it is sometimes too easy to lose Pikmin to them when returning goodies to the onion). The Necatrous Dandelfly and Scornets are also worth mentioning for their special takes on aerial enemies. So even though the enemy selection is limited, those in the level are integrated so well into the theme and level design that it never feels stale. Indeed, previous levels could have benefited immensely from Twilight River’s thoughtful enemy design and placement. 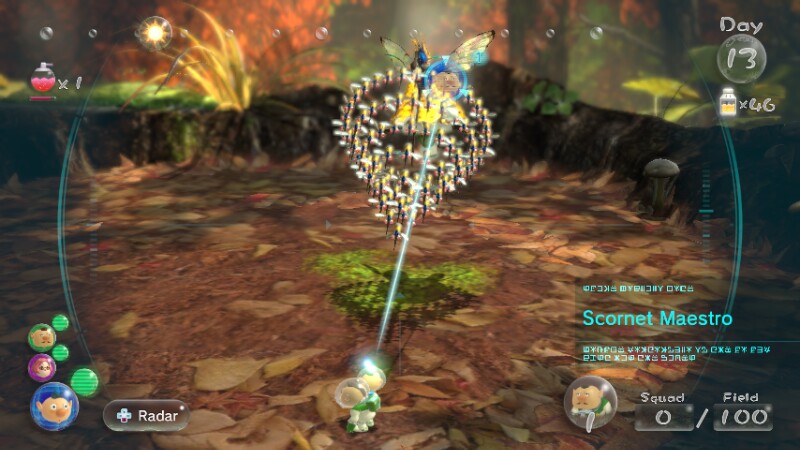 In keeping with the high quality of level-specific enemies, the Scornet Maestro is a fantastic and wholly unique boss. While Pikmin bosses primarily take place on the ground, the Scornet Maestro battle takes place in the air, making the recently discovered Winged Pikmin essential. It feels at times like a clash of aerial armies, Winged Pikmin versus Scornets. It is visually impressive and the kind of battle that probably couldn’t have been done in Pikmin 1 or 2 due to technical and control limitations. Outside of this clever conceit, most of the Scornet Maestro’s moves are balanced, fairly telegraphed, and a perfect fit for the high-concept scenario. This is possibly the most distinct boss in the game and one of the most specialized and memorable battles in the series. 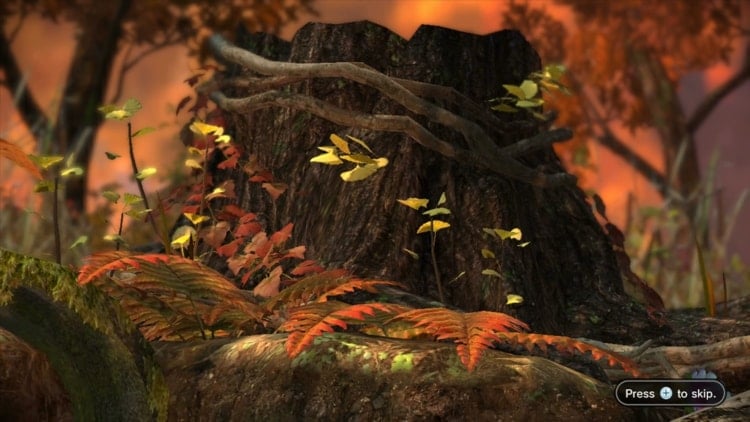 Truth be told, I wasn’t anticipating Twilight River to hold up as well as it does upon closer scrutiny. On most playthroughs, the level breezes by without me taking much notice, the only bumps in the roads being some unclear visual signage about the lily pads, the poor placement of the Scorch Guard, and the inevitable loss of some Winged Pikmin to Arachnodes on their way back to the Onion. But perhaps my not taking much notice of the level is testament to the immersion and flow it inspires, despite its many similarities to the Garden of Hope (a flaw shared with almost every level in the game). Indeed, the Twilight River manages to be a highlight in spite of these similarities because of the precision and intentionality of its design. The setting, enemies, Winged Pikmin, and level design merge together for a surprisingly cohesive experience that marks one of the game’s high points.