Of the roughly fifteen games Nintendo developed for the Wii U, perhaps none are as mistakenly overlooked as Pikmin 3. Of course, it’s not surprising that an underperforming entry of a niche franchise on a flailing console failed to set the world on fire. But while other AA Wii U games such as Captain Toad: Treasure Tracker and Donkey Kong: Tropical Freeze have been given a second life on the Switch, it remains unclear if Pikmin 3 will ever see the light of day again. Meanwhile, the fate of the franchise is equally unknown, despite series creator Shigeru Miyamoto famously stating development was near completion years ago. In honor of this underappreciated gem and the series devotees who were strung high and dry at yet another E3, I will be harnessing 100/100 of my analytical prowess to burrow into Pikmin 3’s design level-by-level. In this entry, I will take a look at the game’s first course, the Garden of Hope. 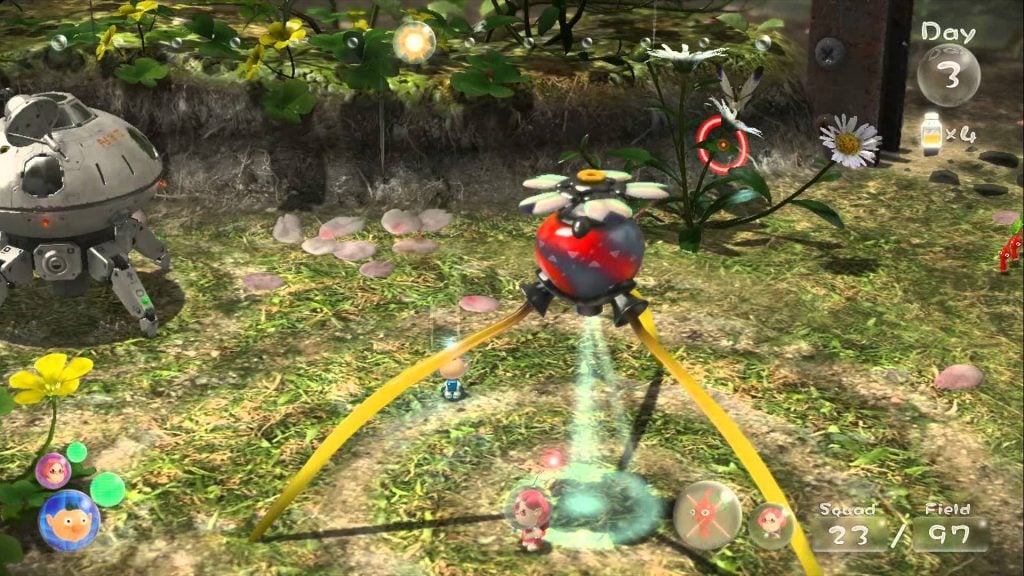 Well… the Garden of Hope is not technically the first course. But after a brief stint as Charlie in the Distant Tundra and another as Alph in the Tropical Wilds, the Garden of Hope is where the first significant chunk of gameplay takes place and where most of the mechanics specific to Pikmin 3 are taught. Upon locating Brittany’s signal, Alph traces it to the Garden of Hope, where he discovers Rock Pikmin he uses to shatter a barrier Brittany is trapped behind. From there, the two team up to defeat the game’s first boss, earning a telephone that points them toward Charlie. Although the player is welcome to revisit the Garden of Hope whenever they please, the game does not require it until after they have visited the other three main levels and brought Louie onboard. Louie steals all the player’s juice and bolts in the night, where he is abducted by the Quaggled Mireclops, which must be defeated to access the game’s final world. All considered, the Garden of Hope houses some of Pikmin 3’s most significant narrative moments and acts as a home base for the player to visit at the beginning and end of their journey. 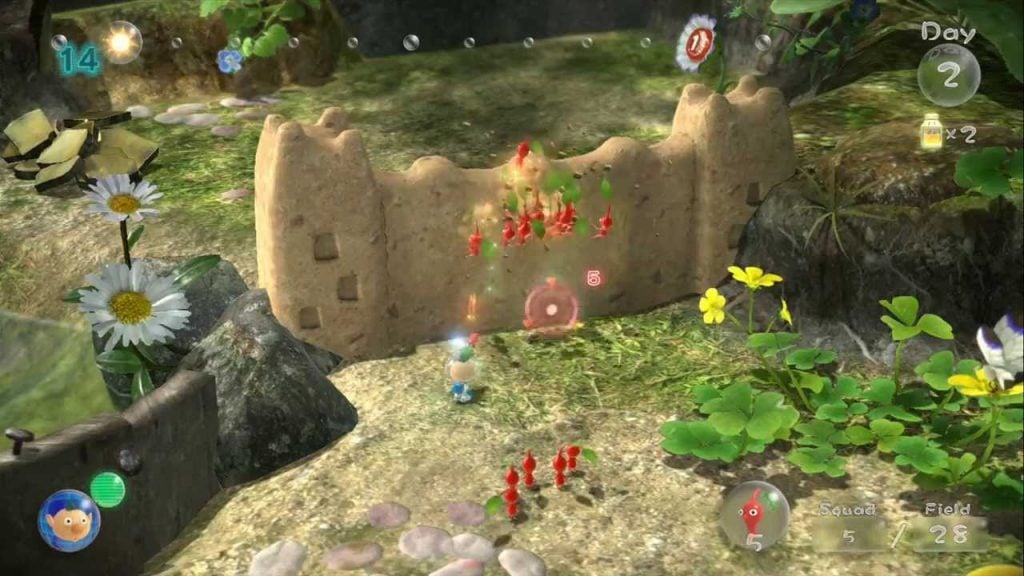 Aesthetically, the Garden of Hope is the sort of prototypical space of innocence in which many Nintendo games start. Like the green and grassy first world of a Mario game, the Garden of Hope is non-threatening, visually clear, and naturalistic. Its first half (the northern portion accessible before capturing Louie) is an extensive tutorial that introduces several new mechanics from swapping characters to the juice-based time limit system. It bears a striking resemblance to the standardized garden scenery of the original Pikmin’s Forest of Hope and Pikmin 2’s Awakening Wood, which play similar introductory roles in their games. One gets the sense that this tame garden backdrop is what series creator Shigeru Miyamoto had in mind when he was reputedly watching ants march on his patio and wondering what a game about that might look like. Although some might say the Garden of Hope is a bit blasse or generic, it establishes a template off of which Pikmin 3’s other levels can riff. And with a couple small caves, a tree stump, and plenty of water (especially in its unlockable southern half), it offers fairly distinct settings that fit together naturalistically. 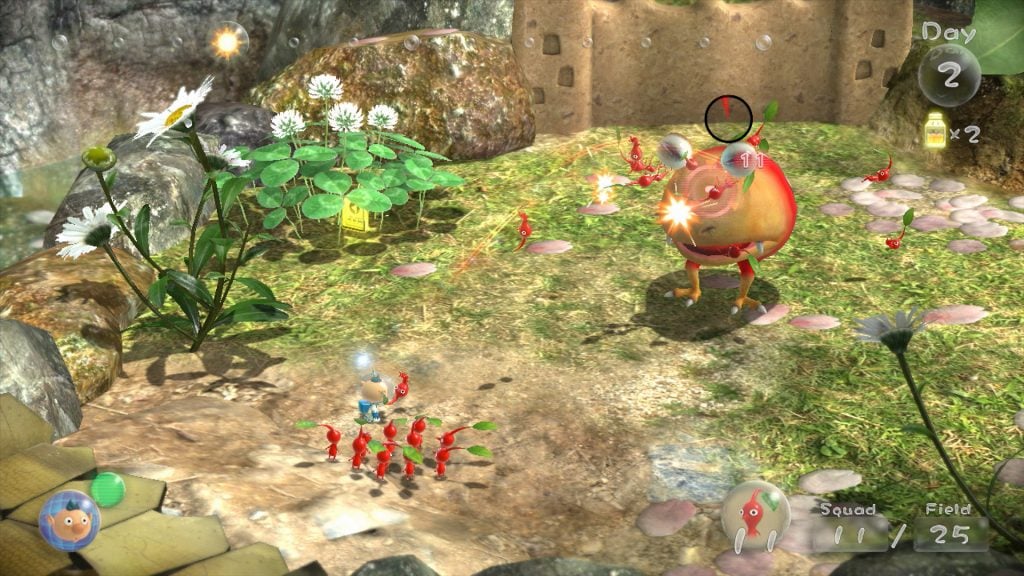 The Garden of Hope’s layout is arguably the simplest in Pikmin 3. It has a large central area that doubles in size (and becomes much more aqueous) when the player returns later in the game. Five branching paths are attached to this main area, three of which are accessible at the beginning of the game, and each of these paths contains a simple premise (discover Rock Pikmin, fight a boss, solve a pulley-based puzzle). The southern half of the level is a little bit more complex, with some tricky underwater navigation that effectively adds a second level to an otherwise flat level. It also gives way to two more arms, one of which houses another boss fight, and another which contains a tougher version of the pulley puzzle introduced earlier. In other words, the layout starts off quite simple and becomes more complex with subsequent visits, depending on what Pikmin the player has in tow and how far they have progressed in the narrative. While I have some reservations about Pikmin 3’s expansive (and sometimes convoluted) maps, the Garden of Hope pulls it off due to the slow-but-steady piecemeal manner its space is introduced.

It is in part because of this evolving and increasingly complex level design that progression and growth feel like the Garden of Hope’s main themes. On one hand, the level changes more drastically than any other level depending on where the player is in their playthrough. What starts out as an introduction to Pikmin 3 becomes an increasingly diversified and complex space, with new regions and enemies to encounter that generally increase in difficulty. Even the region’s three pulley puzzles start simple but get more complex as the player gains access to new Pikmin types. Inasmuch as the Garden of Hope is a home base, it is also an evolving space that teaches and tests numerous mechanics of varying depth and difficulty. It starts out linear but ends up as open as any level, and witnessing that change over the course of the game is one of the Garden of Hope’s greatest strengths. 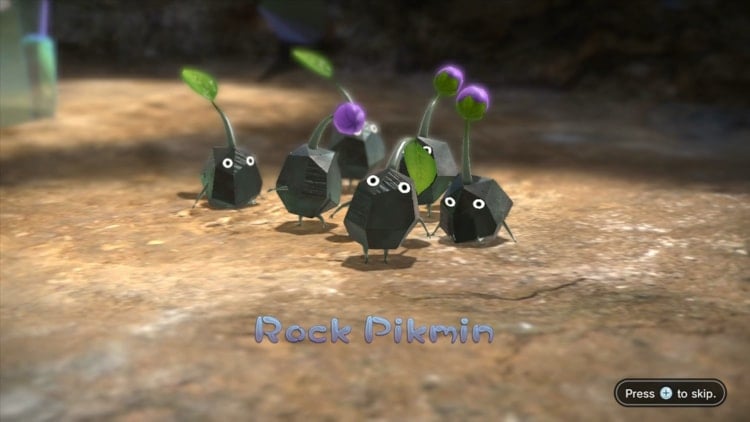 The Garden of Hope is also where Alph meets two of the five Pikmin types, the Blue Pikmin of past games and the new Rock Pikmin. While Blue Pikmin are more or less the same as in Pikmin 1 and 2, Rock Pikmin effectively replace Pikmin 2’s overpowered Purple Pikmin. These Rock Pikmin are a fantastic addition that provide a hefty oomph when thrown similar to the Purple Pikmin, but they are much more balanced and can also shatter glass barriers. Their bulk makes them possibly the most enjoyable Pikmin to control in combat, and using them to shatter glass barricades provides a gutteral satisfaction other Pikmin can’t replicate. 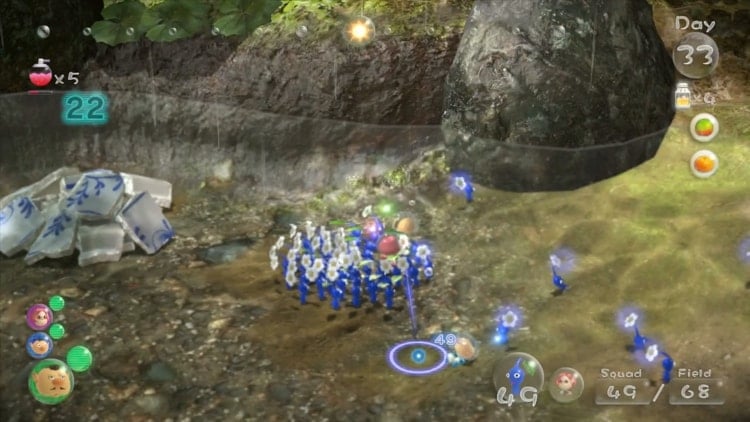 Along with two new type of Pikmin, the level is also home to a whopping twenty-one enemy types, most of which are well-placed and therefore only made accessible once the player is prepared to face them. Around half of these enemies, such as the Red Bulborb and Yellow Wolliwog, are time-tested series staples. The other half are new additions that mostly reside in the Garden’s watery southern half. Because of this, the vast majority of new enemies live in or adjacent to the water, with only the harmless Scutterchuck a fit for Rock Pikmin. While I appreciate the diversity of underwater creatures, more crystalline creatures best suited for Rock Pikmin could have provided more opportunity to use them in battle. And although most of the designs of the underwater creatures are perfectly passable, underwater combat often feels unnecessarily tough, with light refraction and some cluttered objects in narrow passageways impairing visibility. This is especially irksome when dealing with enemies like the Puckering Blinnow, a swift translucent fish that demands quick reflexes and keen eyesight. 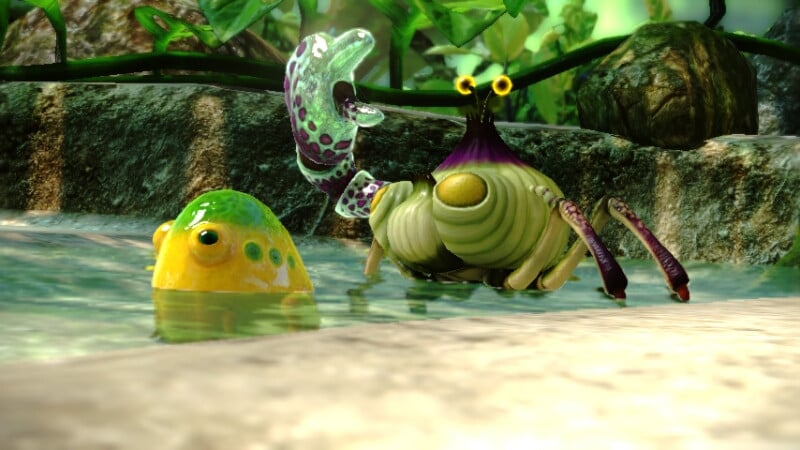 Many enemy weaknesses are also difficult to read, which feels a bit inelegant in a game built around elemental roshambo. Consider the Yellow Wolliwog: an enemy familiar to series vets, but probably cumbersome to newcomers who might encounter it on Day 2. While the aforementioned Scutterchuck’s invite a barrage of Rock Pikmin through their visual design, the Yellow Wolliwog is visually ambiguous. Should the player choose to attack with Red Pikmin, they could risk losing several of their comrades, not because they misread the enemy, but because this particular enemy has an ability that’s not adequately communicated. Possible solutions abound: Why not have them don a similar crystal hat or at least color them black? Or have an idle animation where they occasionally stomp so the player can infer to attack with the seemingly less stomp-able Rock Pikmin? Or move the data log out from behind them so the player can read about them? This mediocre visual communication is a running problem in Pikmin 3, and it is particularly egregious here in the first level, when the game handholds in nearly every regard but throws indiscernible enemies at the player willy-nilly. 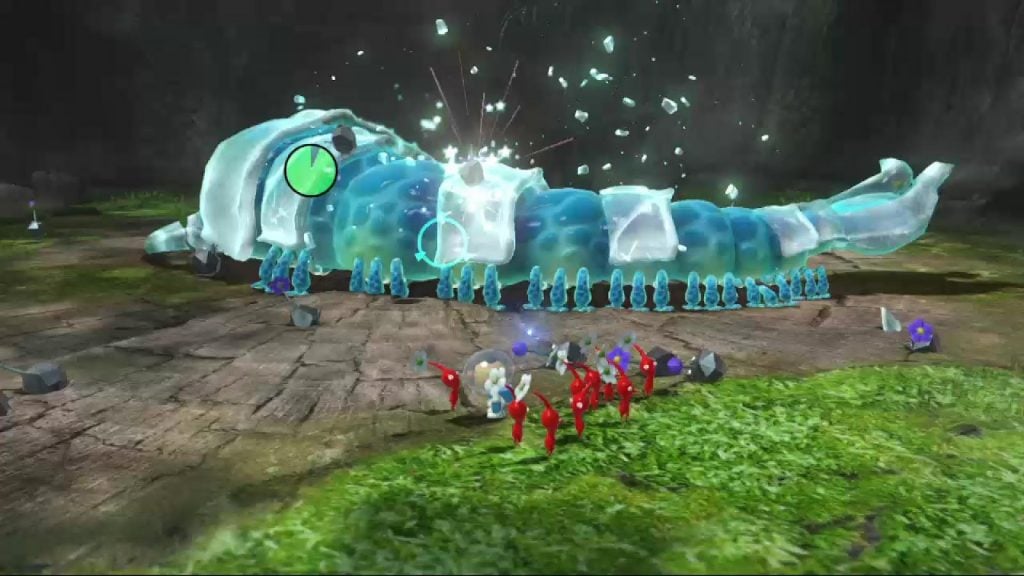 The Garden of Hope has the distinction of being the only level with multiple boss battles — the Armored Mawdad and the Quaggled Mireclops. Fortunately, both are doozies. The Armored Mawdad is the game’s first boss, and as such follows a fairly simple pattern and is relatively easy to beat. Shattering his exoskeleton with Rock Pikmin and hammering home with Red Pikmin help reinforce each Pikmin’s characteristics and the importance of strategic play. And despite having only two Pikmin types available, there are multiple viable strategies for beating this boss, making for some fun experimentation in repeat playthroughs. The only major downside is that the camera can be as tough to grapple with as the boss itself. 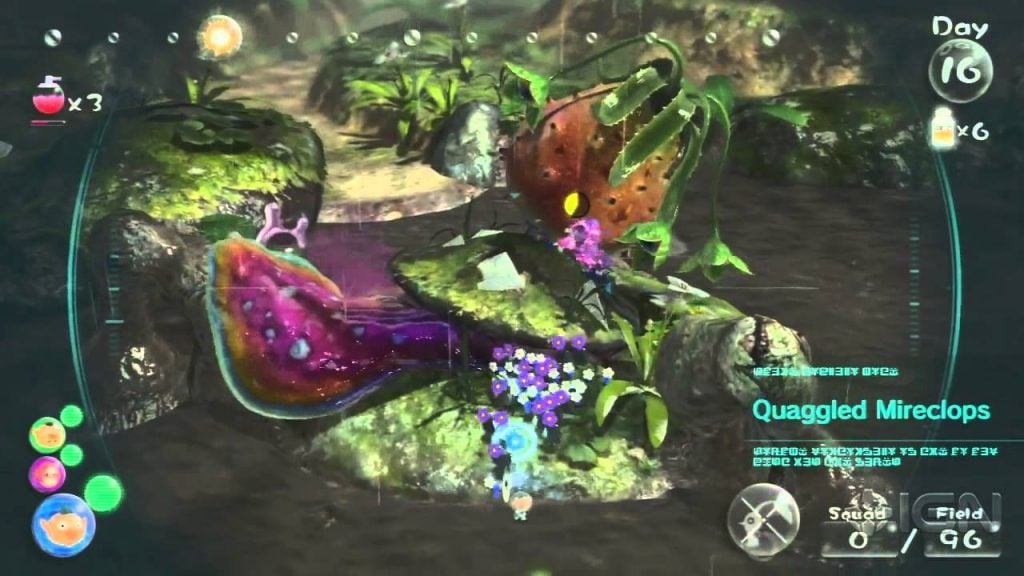 In a game with a strong environmental message, the Garden of Hope is an evolving and enveloping backyard hearth worth fighting for. As a first glimpse at HD Pikmin, its environments, fruits, and wildlife all validate their own existence merely through their vivid visual depiction. But generally strong design on nearly every front buttresses the level’s warm aesthetic appeal by making it feel like a level worth coming back to. Despite some minor stumbles in combat and visual design (many of which persist throughout the game), and some less elegant scenarios in the level’s southern second half, the Garden of Hope is a suitably homey start whose design constantly underscores where you started and how far you’ve come.