Of the roughly fifteen games Nintendo developed for the Wii U, perhaps none are as mistakenly overlooked as Pikmin 3. Of course, it’s not surprising that an underperforming entry of a niche franchise on a flailing console failed to set the world on fire. Yet while other AA Wii U games such as Captain Toad: Treasure Tracker and Donkey Kong: Tropical Freeze have been given a second life on the Switch, it remains unclear if Pikmin 3 will ever see the light of day again. Meanwhile, the fate of the franchise is equally unknown, despite series creator Shigeru Miyamoto famously stating development was near completion years ago. In honor of this underappreciated gem and the series devotees who were strung high and dry at yet another E3, I will be harnessing 100/100 of my analytical prowess to burrow into Pikmin 3’s design level-by-level. In this entry, I will take a look at the game’s second course, the Distant Tundra. 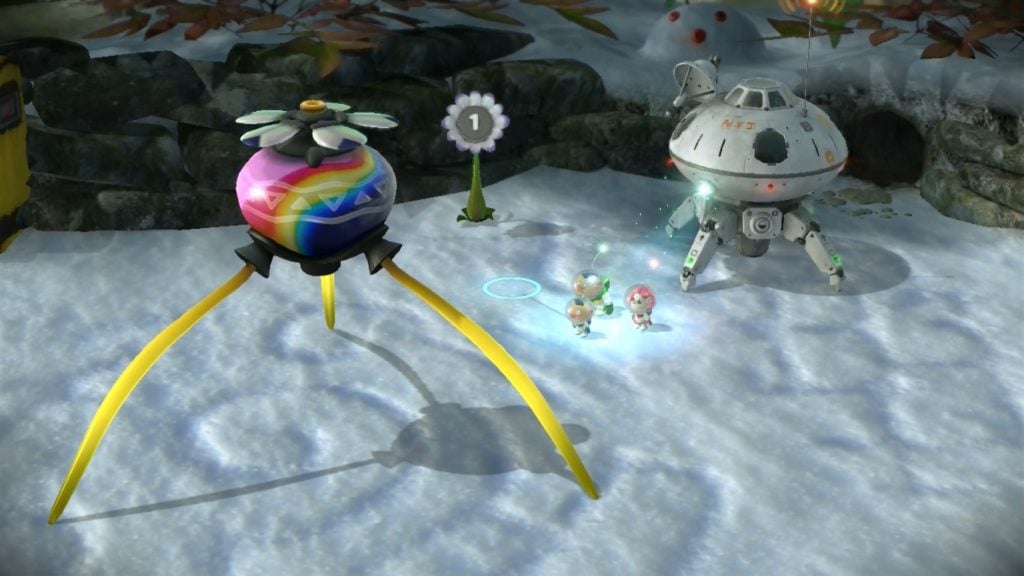 After Alph rescues Brittany in the Garden of Hope, the two of them discover a phone after defeating the Armored Mawdad. This phone allows them to trace Charlie’s signal to the Distant Tundra, the snowy wonderland where Charlie crash landed at the game’s outset. En route to their new destination, the S.S. Drake hits a rock and Brittany is sent falling into a cave where she discovers Yellow Pikmin. After finding a way out, she and Alph must cooperate to build a bridge while remaining on separate sides of a ravine. After completing the bridge, they reunite, battle their way through another cave, and fight the moth-bat boss who swallowed Charlie. From there, the trio can leave the Distant Tundra having never to return.

Aesthetically, the Distant Tundra is Pikmin 3’s most distinct level. Its frosty setting stands out from the game’s lusher environments and can makes it easier to survey the landscape. The forced separation of Alph and Brittany at the start of the stage tests Pikmin 3’s character swapping mechanic in an effective and natural way, although throwing a large amount of Pikmin back and forth can grow tiresome. This is exacerbated by how the vague search for bridge pieces. Since the player doesn’t know both Brittany and Alph will each have to find two piles of tiles on their side of the river, they may end up clumsily throwing an army of Pikmin back and forth multiple times, wasting precious time and hampering pacing. On the plus side, there are a large amount of optional objectives compared to the Garden of Hope and almost all of them (bar two pieces of fruit in the water) can be completed on this first visit, so there is usually something to do nearby should the player find themself awkwardly stumbling about. It’s a small complaint, but it’s also worth noting that since so many levels hide so much optional content underwater, the end game for players who want to collect everything can be very water-heavy. 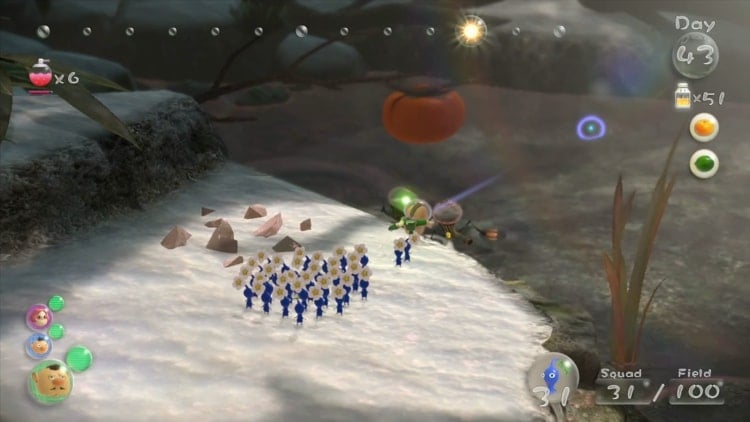 In terms of layout, the Distant Tundra is comprised of one large central area (bisected by the ravine that separates Alph and Brittany) and two sizable loops. The larger of these loops feels more deeply considered than the smaller loop, featuring several enemy types, circumstances built around the area’s Yellow Pikmin, and an intricate boss room. Meanwhile, the smaller loop houses the Yellow Pikmin tutorial section and a mini-boss battle that takes place half in water. Should the player choose to access this mini-boss through the water, they can only bring Blue or Winged Pikmin (10 of which are required to raise a questionable bridge that impedes progress on this side until late in the game even though the player can easily access all the content on the other side of the bridge on their first visit). Still, this simple layout of two loops and a central area makes most of the map easy to navigate, and the emphasis on verticality in a couple of areas (especially the three-story northwestern part of the map) makes traversal more enjoyably complex and strategic, since the player can often see what they can’t access and have to devise a plan to access it. It’s also worth noting that since the player effectively starts the area in three separate locations (once as each crew member), they learn the map piecemeal from multiple perspectives, making the layout even more intuitive. 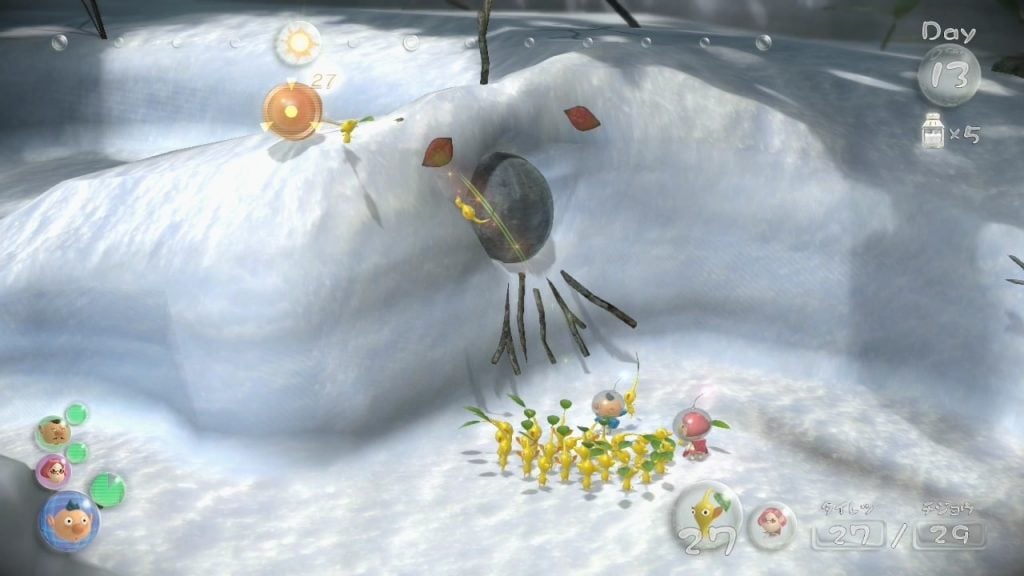 The Distant Tundra’s main theme is snow, at least nominally. It’s a heartening change of setting Pikmin needs more of, and small flourishes like the snowballs spat by Arctic Canon Larva and the snow-carved countenance of the Hocotate Freight President underscore the creative potential of a wintry Pikmin level. Unfortunately, a lot of this potential goes untapped, with the majority of the level feeling disconnected from its defining feature. It would have been especially poignant to have puzzles revolve around the unique properties of snow, incorporating setting into gameplay as seen in some of Zelda’s best dungeons and Mario Kart 8’s best maps. Imagine if there was section where Red Pikmin needed to move a hot coal to a mound of snow which thaws to create a lake full of enemies that were frozen inside. And next to this new lake there is an electrical current that Yellow Pikmin can extend to the puddle in order to zap all the enemies inside, leaving a lake which can be crossed with Blue or Winged Pikmin. But Distant Tundra never does anything procedurally unique with snow, leaving the theme significantly underdeveloped. All we get are the aforementioned aesthetic flourishes which are typically charming but occasionally questionable. Digging in snow, for example is essentially equivalent to digging in dirt, despite snow being presumably much easier to dig in — if anything, the snow obscures which mounds are digable, making the experience of digging through snow ultimately more difficult than digging into the earth. 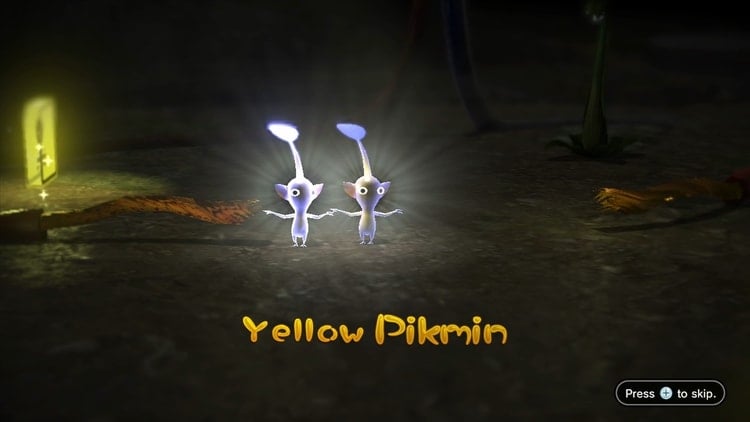 The Distant Tundra houses one new Pikmin type and two new items. The Yellow Pikmin is a series staple capable of demolishing electric fences, conducting electricity, and being thrown especially high, all of which are taught through an unnecessarily lengthy tutorial. If Red Pikmin are the standard Pikmin, then Yellow are the least meaningfully differentiated from the norm. Electric fences in much of the game feel like misplaced artificial barriers and the ability to be thrown high is quickly rendered obsolete by Winged Pikmin. Conducting an electric current is cool, but it is essentially the same experience every time, and this superficial implementation gets a little old.

Meanwhile, the Anti-Electrifier allows crew members to touch electricity without taking damage — an ability so useless it’s arguably not worth the time it takes to dig the Anti-Electrifier out of the snow. Fortunately, it is made up for by the Dodge Whistle, a significant defensive upgrade that enables Pikmin to quickly roll in a direction. This is a useful addition to the repertoire that helps solve the problem of controlling a large Pikmin army, especially in boss fights when Pikmin placement is especially key. Some light “platforming” elements that demanded more use of the whistle could have diversified gameplay a bit more and further emphasized the item’s utility, but it is still excellent even if it is rarely necessary. The Distant Tundra is also where the player is likely to first stumble across the Burgeoning Spiderwort’s berries and the Ultra-Spicy Spray those berries make. Since collecting berries can be a time-consuming process, using the spray feels earned, empowering, and strategic — it’s a fantastic item all-around. 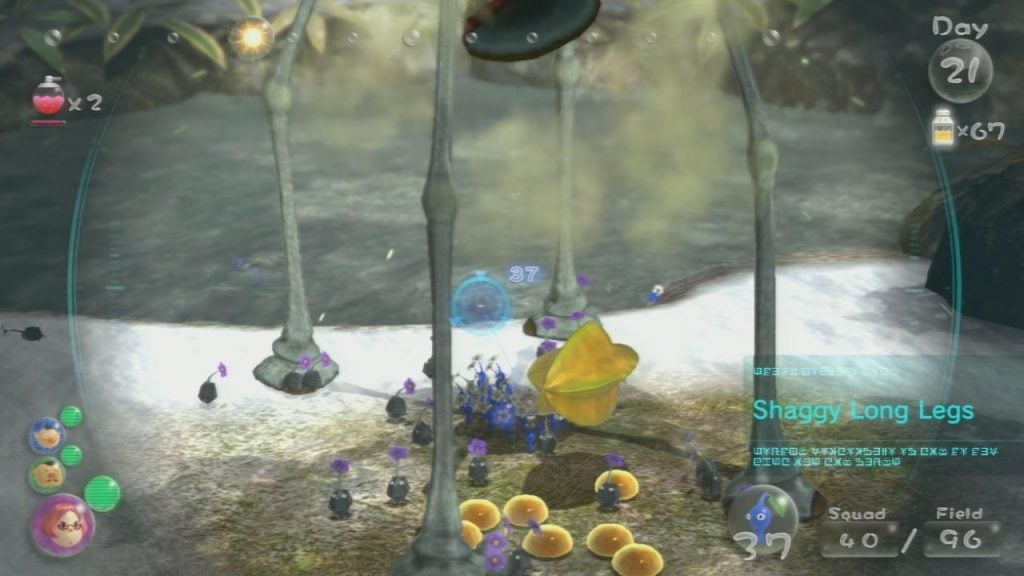 The Distant Tundra houses fifteen enemy types, most of which are new to the series. These new enemies blend well into the environment and are generally higher caliber than returning enemies, which sometimes feel like a poor fit for this level or even the game as a whole. For example, Fiery Blowhogs seem completely out of place, while battles against Swooping Snitchbugs are more of a battle against Pikmin 3’s control set-up, camera, and aiming system. Despite being fairly harmless, I dread encountering simply because of the tedium they invite. I feel similarly about the Shaggy Long Legs mini-boss. Although it is supposedly a fan favorite, I find it an outdated battle lacking the nuance and complexity of newer enemies. Having to fight them multiple times throughout the game is always a chore, especially here, where the half the arena is underwater. 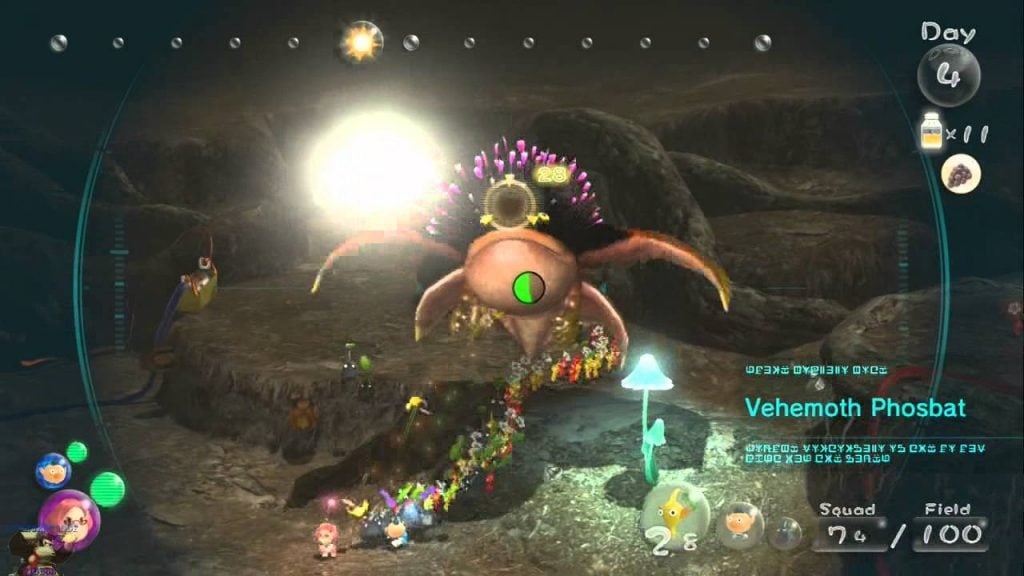 Despite these lackluster enemies, the boss battle against the Venemoth Phosbat does not disappoint. Even in great games, puzzle-bosses can be hit-or-miss (i.e. Demon’s Souls’ Dragon God), but the Venemoth Phosbat combines light puzzles, strategic traversal, and lighting to shape one of the most suspenseful, well-paced, and well-balanced segments of the game. The only downside to the boss fight is the fight itself, which begins once all the lightbulbs in the room have been lit. At this stage, the Venemoth Phosbat is exceptionally easy to take down since it mostly flutters clunkily from wall to wall. Although the experience as a whole (from the narrative build-up, to the setting, to the general concept, to how well that concept is executed) is great, a more diverse moveset in the final phase could gone a long way.

The Distant Tundra is a memorable change of pace that never fully commits to itself. The superficial integration of the its wintry theme into its design is a substantial disappointment, and some underwhelming enemies make parts of the map more of a hassle than they should be. At the same time, much of the eminently navigable map is optional, especially its weaker regions. And its boss battle, items, and aesthetic details make up for some of these design-related missteps to make the Distant Tundra a generally pleasant experience.