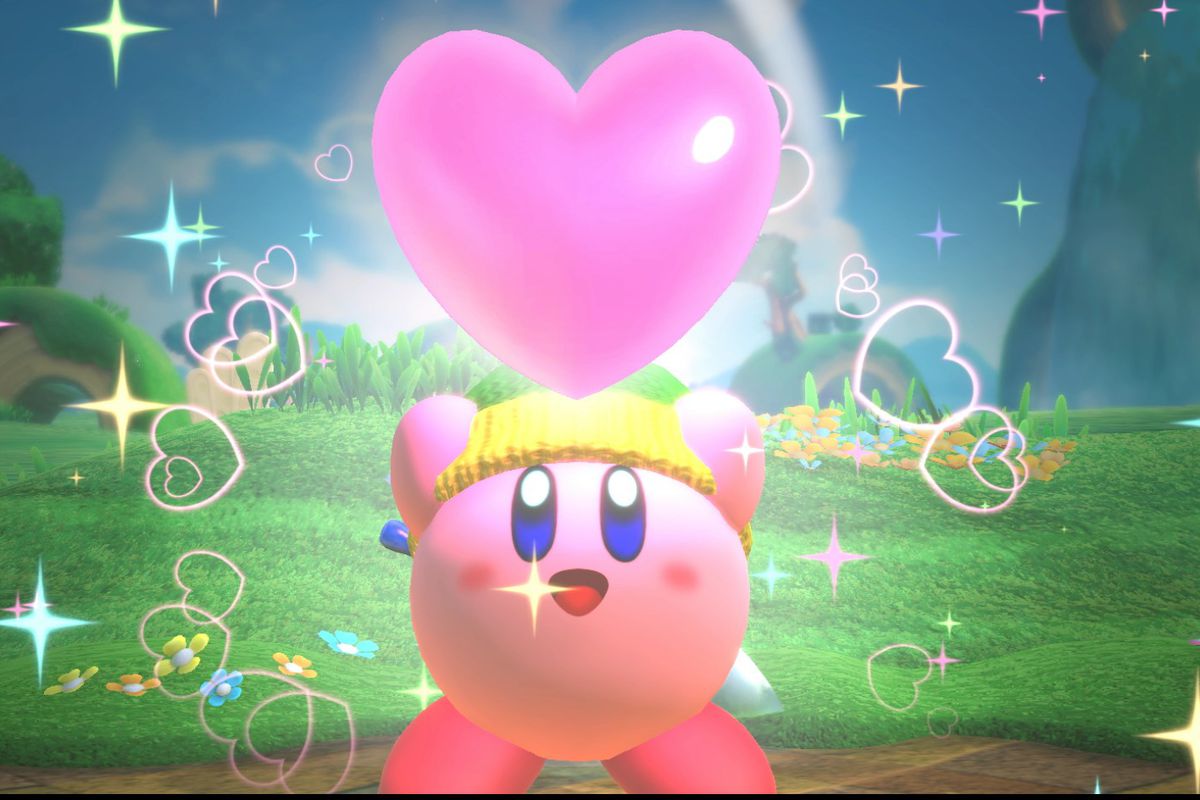 Kirby, Nintendo’s iconic pink puffball, has changed the least of any of their major mascots. Excluding new copy abilities and the addition of multi-player, Kirby’s moveset has stayed mostly the same for over twenty-five years. Kirby Star Allies doesn’t change this series tradition, instead, focusing on improving the underlying framework of the series’ gameplay while spraying on a fresh coat of high definition paint. While the resulting game works, it is ultimately held back by its own brevity and by how little it thinks outside of the series’ own traditions.

Arguably the greatest addition to Star Allies is the ability for Kirby and his friends to augment each other’s weapons. Kirby’s fire ability, for instance, allows him to set his buddies’ weapons aflame and, in the process, makes dealing with ice-shielded enemies a snap. Combining rock and ice creates a curling stone that can be used to activate horizontal switches. Star Allies utilizes these abilities in unique ways, requiring that Kirby and his friends work together to solve the environmental puzzles that hide optional goodies for them to discover within the game’s stages.

These goodies, which come in the form of the game’s many collectible puzzle pieces and switches that open up new stages on the world map, are relatively easy to find. Unlike other Nintendo series, such as the Donkey Kong Country and Yoshi’s Island, which hide their collectibles deep within their levels, most of the collectibles in Star Allies are pretty easy to find, hidden behind trademark red doors that often require the use of a specific powerup to access.

More than ever, these powerups are a blast to use. New additions such as the Staff are incredibly fun, allowing the player to pull off moves that one would never expect within a Kirby game. However, despite how engaging these new abilities are, there is really nothing that pushes Kirby to his limit in Star Allies and, as result,  the game is incredibly easy.

Compounding this issue is the game’s lack of challenging bosses. Besides the optional boss rush mode that opens up after one finishes the game, most of the game’s bosses are made trivial by the addition of three other players. While this is understandable, as the Kirby series often targeted at a young audience and the Switch’s nature as a portable console makes cooperative play a cinch, it would have helped if there was another world, available for expert players after beating the game, that really pushed players to their limits, similar to something like Champion’s Road from Super Mario 3D World.

While the Kirby series has never been known for is pixel-pushing potential, Star Allies’ graphical style is notably more muted than other games on the Switch. Unlike the other two heavy hitters that have launched on Switch so far, Super Mario Odyssey and The Legend of Zelda: Breath of the Wild, Star Allies doesn’t take advantage of the Switch’s extra power to create a new and exciting look and, in the process, looks like a lost Wii U game.

One would expect that, given the drastic limitations in its art style, Star Allies would run at a steady sixty frames per second. Unfortunately, that’s not the case and, whether it was because of issues with development or the need to balance between the Switch’s portable and docked modes, the game runs at a locked thirty frames per second. It’s not much of an issue for a platformer as slow and floaty as Star Allies and is hidden well by the game’s camera, but it’s still an unfortunate omission, given Nintendo’s sterling history of running games at a seamless framerate.

Likewise, the game’s use of dynamic resolution scaling, while subtle for the most part, can give the game an overly soft look that can seem a bit smudgy when projected onto a large TV. In handheld mode, it’s less of an issue, but it still remains a noticeable detraction. One wonders why HAL Laboratory wasn’t able to maintain at least a steady 720p, sixty frames per second experience on the Switch when they were able to hit that benchmark in 2015’s Kirby and the Rainbow Curse, which launched on Wii U.

That isn’t to say that the overall aesthetic of the game is terrible, it’s actually quite nice and Nintendo’s pink puffball has never looked better. The game’s art design exudes a magical whimsicality that makes most of the world fun and inviting to explore. However, there are a few levels, especially in the third world, whose dark, homogeneous look begins to wear on the player and erase some of that magical charm. Despite that issue, however, Star Allies creates beautiful levels that are held back by an unfortunate framerate and a lack of creativity.

An Adventure Too Soon Gone

Another unfortunate aspect of Star Allies is the game’s incredible brevity. From start to finish, it took me less than five hours to finish the game while collecting over two-thirds of its available collectibles. While previous Kirby games haven’t lasted much longer, situating themselves around the 4-6 hour range, they were also presented at a much lower price range, usually around $40. As a result, at $60, Kirby feels overpriced, especially when compared to the pure value that Breath of the Wild, Super Mario Odyssey, and Skyrim offer for Switch owners.

While it’s almost never a good idea to judge games based solely on the length of their adventures, each one of those titles offer a far more substantive investment than Kirby. Indeed, besides the story, some mini-games, and a boss-rush mode, there really isn’t anything else to Star Allies. It’s an incredibly brief game that is gone much too quickly. If it had retailed for a more reasonable $40, this would be less of an issue. However, at $60 and despite all the good things that Star Allies does right, the game still feels too expensive, and not worth the price of admission for the average Switch owner. There are simply better games that can be had at the same price, or even cheaper.

All this criticism might make it seem like I didn’t care for Star Allies. That isn’t the case. It’s a good game and what game does exist is up to most of Nintendo’s usual quality standards. However, there simply isn’t much there that merits a $60 price tag. Indeed, Star Allies’ greatest weakness might just be the surplus of great games that are already on the Switch, whether that be Breath of the Wild, Super Mario Odyssey, or an indie gem like Stardew Valley. With so many great games, it’s hard to recommend, at full price nonetheless, a game that is merely good.

Kirby Star Allies is an enjoyable experience that looks pretty good, plays great, and yet is wholly unremarkable. With only four worlds, lackluster graphics, and limited replayability, it doesn’t fit the bill as a major tentpole franchise for Nintendo. When compared to titans such as Odyssey and Breath of the Wild, it doesn’t just fail to meet their greatness, it is completely outclassed by their intrinsic originality, something that the Kirby franchise needs desperately.