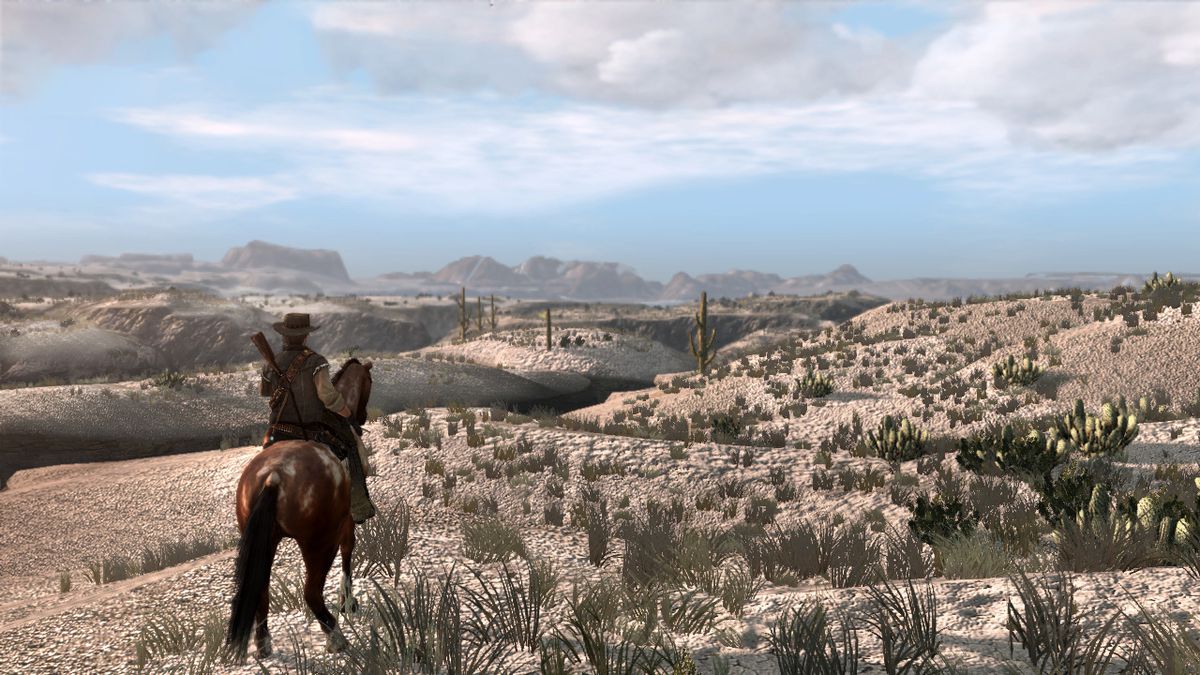 In 2010, the release of Rockstar’s Red Dead Redemption gave us an open-world that was pretty unique compared to anything that had come before it.

Sure, modern 3D open-world games by then had become an increasing norm, owing to the success of urban maps in Rockstar’s own Grand Theft Auto series, but also in more imaginative and boundary-pushing ways with the scope of games in the Ubisoft’s Assassin’s Creed series, attempting to reimagine and bring to life “historical” places.

Red Dead Redemption, however, stood out.

In Redemption’s open world, emphasis is not just on the fact that you’re playing a video game in an open-world setting, but rather that the landscapes through which you traverse are part and parcel of the whole experience. Upon release, for the first time, the word “open-world” actually meant something more profound than “you can go from point A to B in a variety of seemingly open-ended ways”.

A lot has changed 8 years since. Open-world games have grown multiple times in size compared to what was offered in the seemingly wide expanses of Redemption. In 2014, Just Cause 3 boasted a gigantic map beyond anything possible before, and games like Mad Max (2015) laid out worlds with incredible open spaces, continuing a trend set by Redemption half a decade prior.

These technically impressive feats have, however, often yielded little in the way of meaningful connections to players. Emphasis is often put into just how detailed and visually impressive these maps can be, which leads to giant, “empty” worlds to traverse. It’s often an immemorable affair, with the backdrops serving as just that: yet another backdrop to walk through, until moving on to the next one.

Yes, the “backdrops” have become far more impressive and magical than ever imagined before, but have simultaneously lead to boring, uninteresting results. Rockstar’s last major release, Grand Theft Auto V, released about 3 years after Red Dead Redemption, fell victim to just that. Los Santos, a fictional version of real-life Los Angeles, never feels like a real place — a place that in any way lives or breathes.

The area covered by Los Santos is impressive, and the way its citizens bop around is surely a technical feat. But, it’s as if though the soul of what it means to be in an imaginary, wonderful place has been replaced by cutting-edge monotony. It’s a virus of a concept that plagues most open-world games today

“Some trees flourish, others die”

Outside of stellar design when it came to narrative, side-missions and gameplay in general, what made Red Dead Redemption unique was its rather simplistic approach to how you do everything, and basking within that.

Most of the map, despite being a relatively small and contained area, is a joy to simply ride horseback through, without doing all that much beyond it. You might stop when you come across a gang hideout, a “Stranger” mission, or some random event like a man crying for help as he’s being chased down by a pack of wolves, but all of this feels complementary to an otherwise free-roaming experience.

This is further highlighted by the prettiness of Redemption. Fantastical, radiant pillars of light beam through clouds, across open plains and over rough mountainous faces. Light peaks through tall, giant trees, complementing the snowy ground when in Northern regions. Down in Mexico, the Sun beats down at times all at once, making everything look a bit cooked over. When night falls, the landscapes can take scarier, more unsure forms. Careful movements need to be made in the dark, and the absence of the ambient sounds of the day are replaced instead by murmurs only heard at night. But, during sunsets and sunrises, the Western light is at its finest.

As the player is encouraged, not through direct communication but by the force of the game’s map’s actuality, to go yonder through this painterly, American world of the early 20th century “wild west”, the game is sculpted in anticipation of just that. While a fast travel option is always at the ready, the imaginative player might be compelled to instead carry on without it. Annotated by the game’s incidental and procedural score, riding around aimlessly at times is a therapeutic, atmospheric experience all on its own

The stylized look of Red Dead Redemption makes it a timeless classic, and its world a forever existing one that can be revisited in any point in time. Having recently re-played the game (via Xbox One’s backward compatibility), there is no show of “age” outside of superficial notions.

The promotional materials we have before of us indicate a path toward technical complications, of crafting impressive worlds and life-like characters that move and sway in ways that are technically amazing, but at the cost of a more balanced, quaint scope that brought us the first game.

I am sure RDR2 will look technically pretty, but would its beauty be shallow like that of Rockstar’s endeavors since Red Dead Redemption? Would the openness of the landscape be as inviting when most of is sculpted for online play, like the case was in Grand Theft Auto V? Time will tell, but I am fairly certain that the simplicity of gameplay in Redemption will be a thing of the past in its sequel.

Still, my hope is that the team behind RDR2 (not the same as the team behind RDR1) is interested in making a unique game following tradition, as we have far too many over-complicated open-world games to choose from today, but only one Red Dead Redemption.