As a gamer, there’s always been a certain undeniable joy I’ve felt from getting a new game. The excitement obviously varies depending on what the game is, but it’s hard not to be happy when I’m able to add something I’m even mildly interested in to my gaming library. This desire naturally extends to hardware as well; it feels almost essential to have a wide variety of games to buy and play immediately after buying a console. If the first few months of a console’s life aren’t littered with at least a few AAA releases that are “worth buying” then there are many gamers who will simply write the system off as having “no games.”

This is the sentiment that has haunted the Switch ever since March. It had Breath of the Wild, sure, but otherwise “the Switch had no games.” A large segment of the gaming media lauded Zelda as one of the greatest games ever created, but when it came to the rest of the Switch’s projected line-up there was a distinct lack of enthusiasm. Many saw the entirety of the Switch’s first year in two releases: Breath of the Wild and Super Mario Odyssey. ARMS? Looks alright, but nothing too worthwhile. Mario Kart 8 Deluxe? Not interested in a port, thanks. Splatoon 2? More like Splatoon 1.5. Xenoblade Chronicles 2? Pshh, that’ll never make it out in 2017. Factor in a noticeable lack of third party commitment, and to many the Switch essentially only offered two games worth buying in its first nine months on the market. 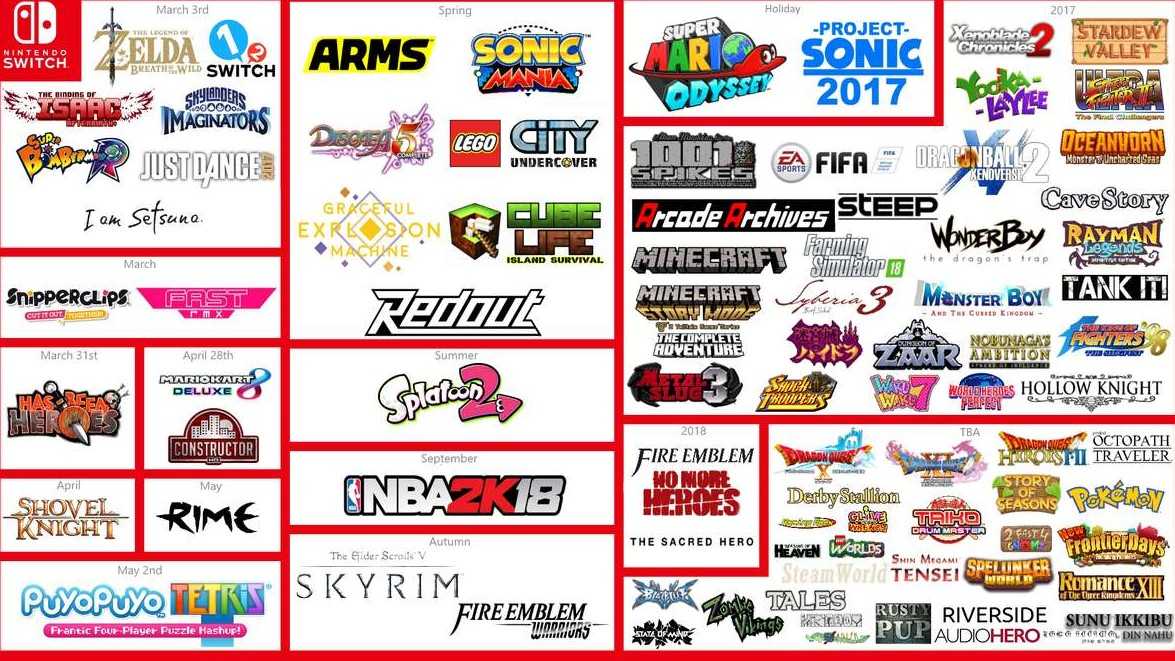 A strong E3 showing, five Nintendo Directs and a string of major releases later and we’re looking at what is undoubtedly one of if not the strongest year Nintendo has ever had. The Switch is still constantly sold out, and not just due to manufacturing difficulties–there’s a genuinely high demand of the system. Every major release has been a sales success, even new IP like ARMS and Mario+Rabbids Kingdom Battle. Multiple indie games–from Oceanhorn to Death Squared to The Flame in the Flood and beyond–have consistently sold best on the Nintendo Switch platform. By nearly all measures the Switch has been a huge win both for Nintendo and many of the studios that are bringing their games to the eShop. With a major AAA title hitting every month and more than 150 games currently on the storefront (with tons more being added every week), there’s certainly no signs of the severe droughts that plagued the Wii U.

Following the shift in narrative this year has been an eye-opening experience. Anecdotally, there always seemed like there was plenty to play since I picked up my Switch in May. Disgaea 5 Complete and Mario Kart 8 Deluxe offered dozens upon dozens of hours of enjoyment alone, and though I forewent picking up ARMS or Zelda (crazy, I know) I was still preoccupied with amazing smaller titles like Puyo Puyo Tetris and Graceful Explosion Machine. As a working adult, there’s only so much time I have to devote to gaming on a weekly basis. A few hours after work and some heavier gaming time on the weekends isn’t nearly enough to play everything across my ever-growing Switch library, let alone my other platforms. However, that never stopped me and a bunch of my friends and acquaintances from getting excited about and picking up several more games over the past few months.

So, why is it that so many of us seem to desire new games despite having decent-sized backlogs and much less time to play than we did in our youth? One argument is that it’s just the way consumerism has ingrained itself into our society. Getting anything new always feels good, be it a new console or a nice new pair of headphones. Retail therapy is real, and by buying a few new items we can genuinely finesse ourselves into being happier (at least, temporarily). Impulse buying tendencies and FoMO (Fear of Missing Out) also work together to create a release week hype cycle that does a great job of pulling us in to be part of the conversation on social media and within our gaming communities. A game like Player Unknown’s Battlegrounds continues to sell amazingly well not just because it’s fun in its own right, but because streamers on Twitch and the gaming media at large do a fantastic job of creating excitement around it and framing it as a can’t-miss, must-have title. The same factors played a part in Breath of the Wild selling more copies than Switch consoles in the first month, and we’ll likely see it happen again very soon with Super Mario Odyssey. The very few Switch owners who don’t like Mario games will almost assuredly pick the game up to be part of the hype.

Ultimately, it wasn’t that the Switch was lacking in a number of great games to play or hours of fun to be had several months ago. Instead, it was simply missing enough hype-inducing games to garner excitement and fuel our desire to continuously buy more than we can possibly experience. The Switch’s library has filled out nicely in the last few months, to be sure, and more options are always a great thing to have. Just be wary of the next time the narrative pops up that a console has “no games.”