There are few names that really ring off in Strategy-RPG circles: Final Fantasy Tactics; Advance Wars, Valkyria Chronicles. Amongst them firmly sits Disgaea, a franchise that’s been almost exclusive to Sony barring 2008’s Disgaea DS. Despite being well respected by fans of the genre, however, Disgaea never really took off in the West in the same way Tactics and Fire Emblem did. Nippon Ichi Software has therefore taken a bit of a gamble by localizing and porting Disgaea 5 Complete to the Switch. And you know what? It’s paid off in spades.

If there’s one thing Disgaea 5 Complete isn’t lacking, it’s personality. The story follows moody, mysterious anti-hero Killia on his quest across Hell in search of the almighty Void Dark and his ruthless forces of evil. The premise is fascinating but never takes itself too seriously. Instead, in typical Disgaea fashion, the campaign is full of campy, lighthearted humor with some adult themes thrown in for good measure. Killia plays the serious role well and keeps the player guessing about his past, but comes off a bit archetypal and is hardly the main draw out of such a colorful cast. Princess Seraphina, the Overlord of Gorgeous (yes, really), serves as a hilarious over-the-top foil to Killia’s loner persona and provides some genuine laugh-out-loud moments as she parades around shooting prinnies and flirting with our hero. Similarly, the softhearted Red Magnus shines as a lovable meathead with the ultimate goal of becoming the most powerful demon in all of Hell. The interactions between Seraphina and Red Magnus are gold and made even better by the game’s copious voice acting. Sure, sometimes Seraphina’s “Oh-hohohohoho!” grates on the ears, but it’s largely the exception to what are some really solid performances all around.

I really want to emphasize just how much the characters of Complete make the game. Each member of your crew is distinct and memorable and breathes such life into each story scene and battle. The cast list fills out slowly but steadily and features loads of main and side character conversations that go a long way in making the player feel like they’re in charge of a crew that really knows each other. The story dialogue is all voice acted and portrayed through lovingly detailed character portraits. I found myself not minding the lack of cut scenes here just because of how great a job the voice actors did in selling the characters. The side conversations are relegated to brief text-only segments below smaller, less expressive portraits, but they still manage to flesh out the characters and provide some of the funniest moments in the game.

Though limited, there’s a good amount of customization here too. The main characters can have alternate colors unlocked (though these only affect their in-game models when battling or roaming around the hub). Players can also create over 100 characters of their own from scratch, being able to name them, set their level (up to a certain point), choose their class, their color palette and even their personality. You’ll then be able to fight with them and see them wandering around the Pocket Netherworld with all of the main characters in their off time. Though most of the character models are thoroughly recycled throughout the game–and the actual sprites are less visually appealing than their HD portrait counterparts–it’s nonetheless endlessly entertaining to recreate your family and friends and have them pull off ridiculous combos on the battlefield. 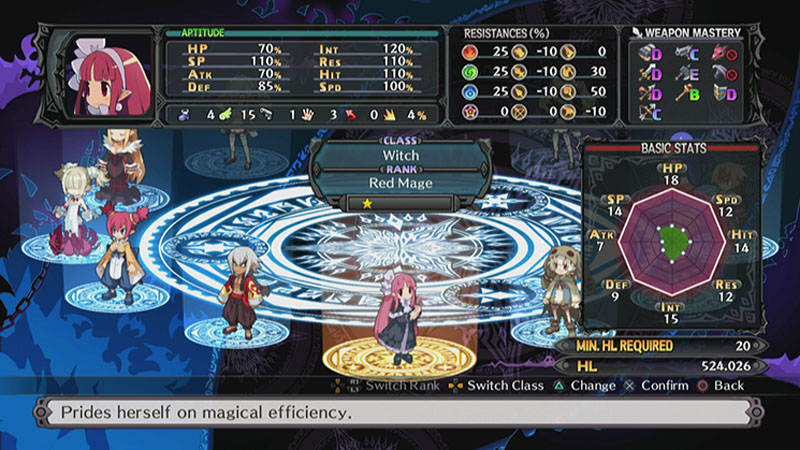 At its core, Disgaea 5 Complete is all about classic strategic gameplay. Players move up to 10 characters around a massive variety of grid-based levels and battle it out using loads of different attacks and abilities. Disgaea 5 Complete features almost 50 classes of fighters to choose from, each with its own special attacks and evilities (more on those later). In an interesting twist on conventional tactic games, characters aren’t encouraged to perform actions individually; instead, the game rewards bonuses for meticulously setting up chains of consecutive actions. Working out the perfect positioning and chaining of attacks truly feels like next-level strategic gameplay and constantly kept me coming back to completed stages just to try and clinch the top bonus.

Gameplay is further augmented by different elevations, environmental effects, side and back attacks, and other common tactical fare. Something unique to the Disgaea series, however, are the special effects caused by Geo Symbols. These effects can range from +50% defense advantages to invincibility, and affect whichever units are positioned on the spaces that match the Geo Symbols’ color. This provides another fun yet challenging wrinkle to the classic strategy formula and, especially in later levels, demands some serious forethought from the player. 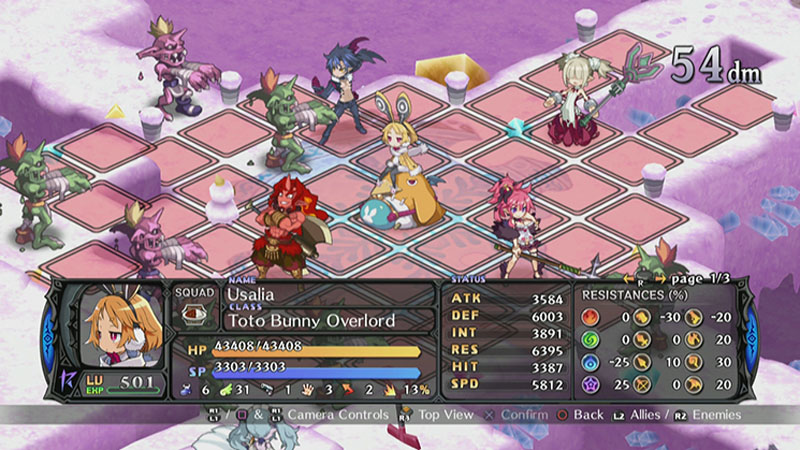 Disgaea 5 Complete revels in the complexity and absurdity series vets have come to know and love. Everything the player needs and does is based out of the central hub that is Seraphina’s Pocket Netherworld. In what is essentially a large inter-dimensional ship, players will find a hospital, equipment and item market, skill shop, record keeper, recruiter, squad coordinator and countless other things. These are all represented by unique shopkeepers that become available the further players progress in the story. This is where the true scope and depth of Disgaea becomes apparent. Just to give you an idea of the insane leveling and stat-tracking possibilities this game offers:

Characters gain mana by fighting which, in turn, they can use to buy evilities that grant them special abilities or stat bonuses. Though skills (special moves) level up on their on, players can also strengthen them in small increments by spending mana on them as well. Each party member levels up in typical RPG fashion, but each also has different classes that level up automatically over time (i.e. Fighter to Warrior).

Know what else you can level up? Every. Single. Item. If it sounds ridiculous, it’s because it is. Players can enter into the Item World inside each item, weapon, and piece of armor and fight through sets of 10 levels to upgrade them. I found it quite effective to pick out the weakest members of my team and level up their gear for an hour or two as opposed to grinding the characters themselves. The sheer fact that you can do this is daunting, to say the least, but it’s also an addicting way to pass the time between story missions. She’s not exaggerating when she says “infinite…”

Items can also be somewhat customized using the Innocents that live inside them. Though some items come with permanent Innocents that can’t be altered, most of the creatures can be stripped from their items and appointed to new ones to gain special stat boosts, elemental attributes, a chance of causing poison or sleep to an enemy when hit, etc. This level of customization felt useful for awhile, but it honestly became tiresome to reorganize and redistribute all of the Innocents whenever I upgraded everyone’s equipment.

In addition to all of that stat-tracking goodness, characters can also be put into pre-made squads that are expanded upon over time. These offer advantages ranging from making squad members giant for three turns with bloated stats to giving them the ability to capture enemies. Capturing enemies opens up a whole other wrinkle called the Interrogation Room, where–assuming you’ve set a player as the Interrogation Squad leader–interrogated enemies can be made citizens, asked to join your team, or squeezed of their magical essence (horrific but incredibly useful) and released back into the wild. Aside from fulfilling side-quests (yes, there are loads of those in this game as well) recruiting new citizens and team members gives you the ability to send them off on completely optional voyages to discover foreign netherworlds and bring back even more items and prisoners. The fact that you can check progress reports on these voyages in between all of the other things you’re tending is a very nice touch.

Similarly to Mario Kart 8 Deluxe and Pokken Tournament DX, Disgaea 5 Complete is the same core game that came out a couple years ago with all of the DLC included. This means Switch owners are getting all 8 bonus scenarios, 15+ characters and other bonuses free of charge. It’s a pretty great value, especially considering that the original version’s season pass is going for $35 on the Playstation Store. All of the special content is handled through a designated character in the Pocket Netherworld, so if you’d rather not take advantage of any of the bonuses you’re totally free to ignore it altogether.

If you’re a hardcore Strategy-RPG fan and have a Switch, Disgaea 5 Complete is a godsend. The amount of content here is incredible and frankly a bit intimidating; while the story should last around 80-90 hours, it’ll literally take hundreds to see everything the game has to offer, and even then there’ll be items to level up and side quests that need completing. Under all the complex systems and steep learning curve, though, there’s gold here for those willing to invest. The depth series veterans cut their teeth on is fully intact and works perfectly as a portable experience. This is immediately one of the strongest titles for the system and, even as a port, sets the standard for what third party Switch support should look like going forward. Hopefully, the early success of Complete will spur Nippon Ichi Software to bring even more of their lineup to Nintendo’s tiny console; they’re a match made in heaven.