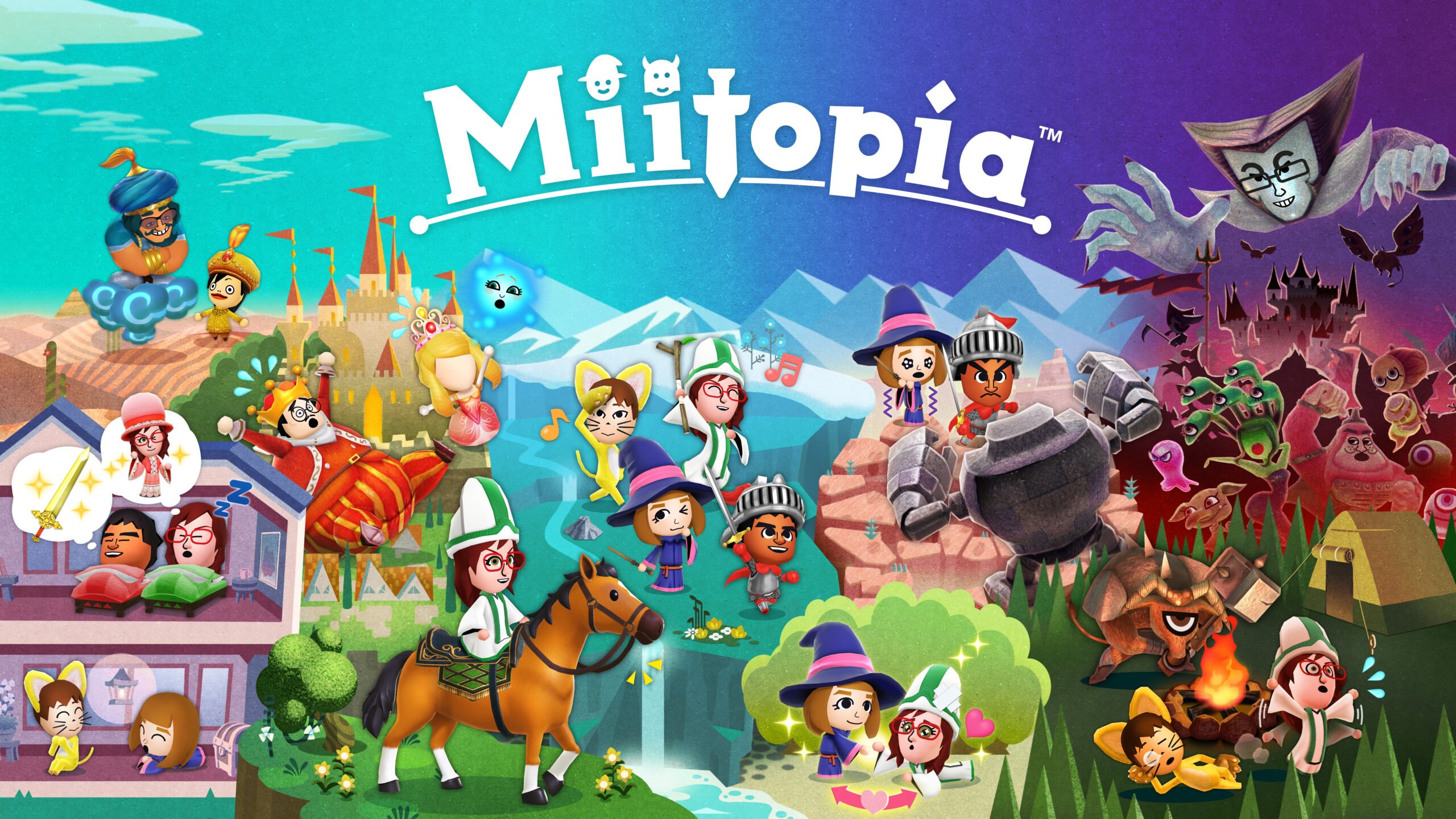 Playing Miitopia on Nintendo Switch in 2021 feels like a throwback to simpler times. The humble Mii was Nintendo’s unofficial mascot back in the Wii era, a time where players from all backgrounds found themselves in Nintendo’s “Blue Ocean” and created their friends, family, and favorite characters in titles like Wii Sports. Years later, though, and Nintendo’s versatile character creator has fallen by the wayside, such that it’s easy to forget that the Switch still has a built-in Mii maker today.

Now, however, Nintendo has seen fit to reinvigorate their aging mascot by dusting off the 3DS RPG Miitopia for a remaster on Switch. Back upon the title’s original release in 2016, it successfully leveraged a straightforward role-playing gameplay loop and a barebones fantasy narrative to show off the vast, silly potential of experimenting with Miis. All that holds true today in a Switch edition that may not add much by way of new features, but with a few enhancements in gameplay and graphics, it gives Miis the love they deserve as they make a comeback to the Nintendo spotlight.

Perhaps it is only fitting that an adventure all about creating your own heroes would have the simplest of storylines. Miitopia opens with a vista of a happy kingdom of Miis going about their daily lives before a menacing dark overlord (fittingly named “The Dark Lord”) swoops in to wreak havoc on the land. He steals the faces of countless hapless Miis, leaving it up to an intrepid chosen hero and a band of friends to team up and embark on a quest to defeat the shadowy threat. Fantasy plots don’t get much more barebones or stereotypical than Miitopia, but that is at least partially by design. This narrative framework, punctuated by lighthearted writing and a handful of silly set pieces, is basic enough to let the individual player-created characters take center stage.

As the name would imply, the real attraction in Miitopia is the army of avatars you can create. This emphasis is clear from the moment you first boot up the game, as it asks you to create a Mii before even showing the title screen. Nearly every major character in the game is a Mii of your own creation, from your party of heroes to the Dark Lord himself. While Nintendo’s Mii makers have always been both intuitive and versatile, developer Grezzo has taken this system to all-new heights of power. Just take a look at social media to see how incredibly creative players have become with the character builder–new functionalities for hairstyles and makeup have enabled players to create almost any character imaginable. Whether you want to capture your friends and family or recreate your favorite game or movie characters in Mii form, the character builder makes it possible. It might take some time to really learn how to make the most of the system, but Miitopia on Switch rewards creativity and allows for effectively endless possibilities for character creations.

The story might underwhelm on its own, but by letting players develop their own cast of zany and out-of-place characters, Miitopia opens itself up to become a vast crossover of potentially Smash Bros.-esque proportions. It’s a fantasy adventure where your high school girlfriend can rub shoulders with Goku from Dragon Ball, Beedle from the Zelda series, and Zagreus from Hades on a quest to keep Ganondorf from stealing Princess Peach. Seeing your creations act out increasingly silly scenarios throughout the nearly thirty-hour campaign provides a novelty factor that cannot be beaten. Of course, that appeal entirely depends on whether you are willing to put in the time and effort to design a large enough group of Miis to make these scenarios come to life. There is no denying that it can be time-consuming to meticulously design dozens of Miis throughout the game, so players who do not have the patience for the process will get far less mileage out of the game as a whole. Put in the time and effort, though, and a downright silly and inventive adventure awaits.

Miitopia’s characters might offer boundless variety, but the opposite is true for its gameplay. At least nominally, Miitopia is a turn-based RPG. However, its gameplay is so rudimentary that describing it as a roleplaying title feels overambitious. Overworld exploration is more akin to Super Mario World than Final Fantasy, having players select levels from a map and then traversing them automatically before being whisked away to random battles. Combat features your standard slate of physical attacks, spells, and status boosts, yet you can only control your player character directly–all other party members fight automatically. There is not even a strategy system as in the Dragon Quest series to help you determine what your NPC companions do in battle. Instead, battles largely play out on their own with only the slightest elements of strategy required on the player’s part.

There are a handful of wrinkles to the combat system, such as the inclusion of traditional jobs and classes that you would find in any other classic RPG—thief, knight, mage, and pop star, among others. Along with that, players can also specify the personalities of their party members, such as kindness, stubbornness, courageousness, and so on. Both classes and personalities will affect how each character behaves in battle—a “kind” character might throw themselves of an enemy’s attacks to shield their companion, while a “stubborn” character will periodically attack twice in a single turn. Even then, these factors add only the slightest intricacies to a remarkably straightforward battle system.

While it’s not likely that many players will pick up a game like Miitopia strictly for its combat system, it’s a shame that there is not even an option for increased depth or complexity here. Even Nintendo’s much-advertised inclusion of an all-new horse to the player’s party does little to shake up the eventual monotony that ensues in the combat system thanks to the relentless automation. The extreme simplicity means that there’s little reason not to fast-forward through all enemy encounters–after all, Nintendo has even included a dedicated button for that very purpose.

Where the gameplay does get a bit more interesting (if not much more complex) is in the many inns strewn throughout the game. After each level, players can rest at nearby inns to not only recoup their HP and MP, but also to tighten the bonds between party members. You can strategically determine which characters share rooms with each other and even send them on outings together, helping them grow closer together. These relationship-building activities are among the game’s best highlights, as it’s always fun and satisfying to see characters exhibit their quirky personalities in quick interactions when they visit the beach, library, movies, or other locations together. There are tangible benefits to fostering these relationships as well, as characters that like each other are more likely to help each other out in combat by shielding them from attacks, boosting their stats, or strengthening their actions. Miitopia thus blends its character development with its battle system, adding a much-appreciated layer of light strategy.

Beyond the addition of the horse and improved Mii maker, this Switch remaster doesn’t change much about the 3DS original. The most apparent change is its new coat of high-definition paint. The game has an eclectic art style that mishmashes the bobblehead character designs of Miis with lush 3D environments, a 2D graphic overworld, and cartoonish cutscenes. The contrast does not always work, and at times, Miitopia’s graphics can feel like a clashing blend of contrasts rather than a cohesive whole. Nonetheless, from a purely graphical perspective, the improvements from the handheld original are striking. Water glistens with a beautiful shine, forests gently sway in the wind, and interior locations come to life with elegant lighting. A game like Miitopia might not be a graphical showcase in the traditional sense, but Grezzo has nonetheless polished this visual hodgepodge into a shining new product on Switch.

A Welcome Return to Miitopia

Miitopia can feel like a blank slate in so many ways, from its barebones combat to its shallow storytelling. Yet these factors are exactly what gives the game its unique appeal. Nintendo’s whimsical RPG taps into everything that made Miis such a revolutionary concept back in the days of the Wii by giving free rein to create any character they can imagine and send them on a grandly fantastical quest. Its meager mechanics may leave dedicated players lacking when it comes to variety or depth, but at the same time, such simplicity makes the game accessible to players of all skill levels and lets the Miis’ inherent, relentless charm take center stage. Grezzo has done a fine job remastering this title for a new platform and a new audience, endowing it with a more versatile character creator and a lush graphical overhaul to make it fit for Nintendo’s hybrid console. Whether you wish to relive those glory days of the Wii where Miis were all the rage, or you want to see your favorite characters partner up on a wild adventure, there has never been a better time to visit the diverse lands of Miitopia.