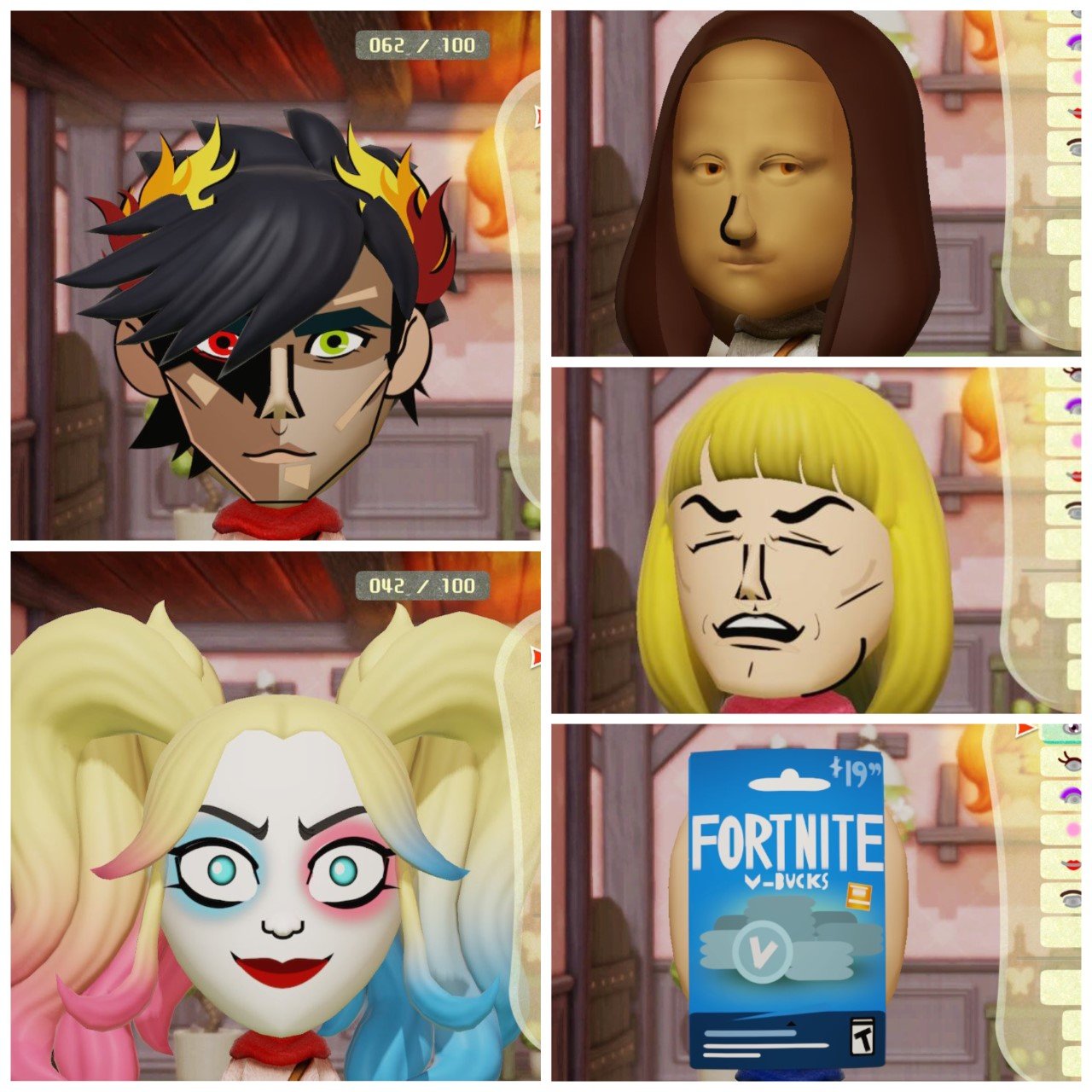 Yesterday I wrote up on some of my personal favourite creations that the Internet has to offer in regards to the character creator tool from the Nintendo Switch demo of Miitopia. Well I couldn’t help myself, I had to write more. Lying in bed last night, I found myself drawn to Twitter once again to seek out more creations and I was not disappointed with my finds. So I just had to do a part two on this series. I might even do a part three if there are more to be found, which is highly likely. Let us take a wander through the finest of characters made with the Miitopia Mii creator. As with my blog yesterday, I will be crediting all of the original creators and linking their Twitter accounts so be sure to check them out if you are interested in the access codes for the Mii’s.

First up is another spicy meme that has been transferred over into Mii form. The Spunch Bop sad face- which is basically just the depressed face that Spongebob Squarepants pulls in the show- has no right to work as well as it does on a Mii but here we are. Creator @rheycore has even managed to get that giant tear drop in there. A true masterpiece in Mii form.

Aku the shapeshifting demon from the Samurai Jack cartoon also looks surprisingly good as a Mii, which is something we now know thanks to @Red_Bakeneko.

I mentioned a Twitter user yesterday who made a bunch of super cute Mii’s on the Miitopia demo and we have another gamer who is going all in with the cuteness too. @ThePinkMeaniie has made several awesome Mii’s of characters, singers and personalities so I am going to post them a few of them. Harley Quinn, YouTuber CorpseHusband, Madoka Kaname from the anime Puella Magi Madoka Magica, Marina from Animal Crossing, Lady Gaga and Nicki Minaj are just a few of the pink fuelled, super cute Mii’s that @ThePinkMeaniie has created. Take a look at them below.

The fluffy sheep Pokémon Wooloo gets the Mii treatment courtesy of @CrazeHaunt. It’s a little disturbing seeing Wooloo standing on two legs but this is still a fantastic creation.

@LikeAFeesh goes in on the meme’s with this classic He-Man look from that infamous “HEYEAHYEAH” meme. The creator also made Skeletor and then got the two of them to frolic in the game. I shall post the whole story below. Still a better love story than Twilight.

Everyone’s favourite Disney moron Kronk now comes in Mii form and he is as stunning as ever thanks to @JingusFlorpus. This isn’t the only Kronk out there though…

@AradorTD has also made this awesome Kronk Mii. The Kronk’s are taking over and I am completely okay with this.

@Twili_Princess has made this fantastic Mii version of Zagreus, the protagonist from the Hades game. I love the attention to detail here, such as the one red and one green eye, the dark shadow under one eye and the fiery wreath on his head. Perfection.

@CosmicGAZ has made some awesomely nostalgic Cartoon Network show Mii’s including Ed, Edd and Eddy from the show of the same name, Ami and Yumi from HiHiPuffyAmi Yumi and Grim from The Grim Adventures of Billy and Mandy. @Cosmic Gaz also made a Hank Hill Mii from King of the Hill for all your propane needs.

This Mii version of Garfield has got that disinterested and unimpressed look down to a tee thanks to @stardraw123. Fabulous work!

Whoever said that video games aren’t art? @Nakios_ is proving all of those naysayers wrong with this incredible Mii version of the Mona Lisa that they have wonderfully named “Mona Miisa”. I have no words. Beautiful. Just beautiful. Super impressive too with that detail. This must have taken so long. Definitely worth it. Nice job @Nakios_.

Wooper. That’s it. That’s the Mii. Thank you @SuspendedSpirit. I needed this today.

So, this one has been making the rounds online and for good reason. @The_Lucbomber managed to create a $19.99 Fortnite V-Bucks Gift card with the Mii character creator. I mean, that is an achievement right there. Look at it! It’s beautiful.

Another Twitter user actually used the V-Bucks card to make this rather hilarious little clip, featuring Sans from Undertale. How is this actually happening in a Nintendo game right now? What is real life? Thanks to @Nawniii for this one.

I mentioned @TheCappucino04 yesterday with a Mii they made but they have now turned their Mii making skills up a notch with this Peter Griffin Mii from Family Guy. Magnificent.

Joey Wheeler’s disturbing meme face from Yu-Gi-Oh becomes a Mii and it is just as creepily hilarious as you might expect. @Galatea_83 is out here doing the lord’s work with this creation.

Mario and Luigi are off to find that spaghetti with this shot from the infamous Super Mario cartoon that has somehow managed to be turned into a Mii. How are you guys doing this??? The talent is unreal. Kudos to @milkystar64 for this literal piece of art.

@GazdenRoolay is hitting us with the old school memes with this Troll Face Mii. Nice.

Spinel from Steven Universe is equally creepy in Mii form as she is in the show. I would definitely consider that a win from creator @Kyo_Nightfall. Just…so creepy. I love it.

So this one was Tweeted out by @ZVAARI but neither they nor I could find the original creator but hopefully @ZVAARI will include it in their Tweet thread if they do find them. This is the video game villain crossover that I didn’t know I needed. Cortex’s expression is absolutely on point.

To conclude todays showcase of Miitopia Mii’s, we have the saddest image I have ever seen. I mean, it is literally just a PNG of a broken Nintendo Switch. But it made me chuckle and so I am including it. Thanks for this @BlueyBot.

That’s it for part two! Like I said at the beginning at the blog, part three may be incoming if the Internet keeps giving me so much to work with. Stay tuned for more.