For the Metroid fan, it’s either feast or famine. Up until last June, series devotees were in a record-long drought, having waited seven years for word of a…soccer-less Metroid game. But then E3 2017 landed the one-two knockout of Metroid: Samus Returns and Metroid Prime 4. It was as if history had nearly repeated itself, as fifteen years earlier the simultaneous release of Metroid Fusion and Metroid Prime ended another near-decade-long dry spell. And while Metroid Fusion remains a fondly remembered game, Metroid Prime stole the show, bringing the franchise into 3D while collecting countless accolades. But how does the Gamecube’s killer app hold up a decade and a half later? In celebration of Metroid Prime’s return, I will be systematically analyzing the design of each of the original’s main areas. Tally-ho, Tallon IV — it’s time to scan you region-by-region. In this entry, I will look at the game’s sixth area: Phazon Mines. 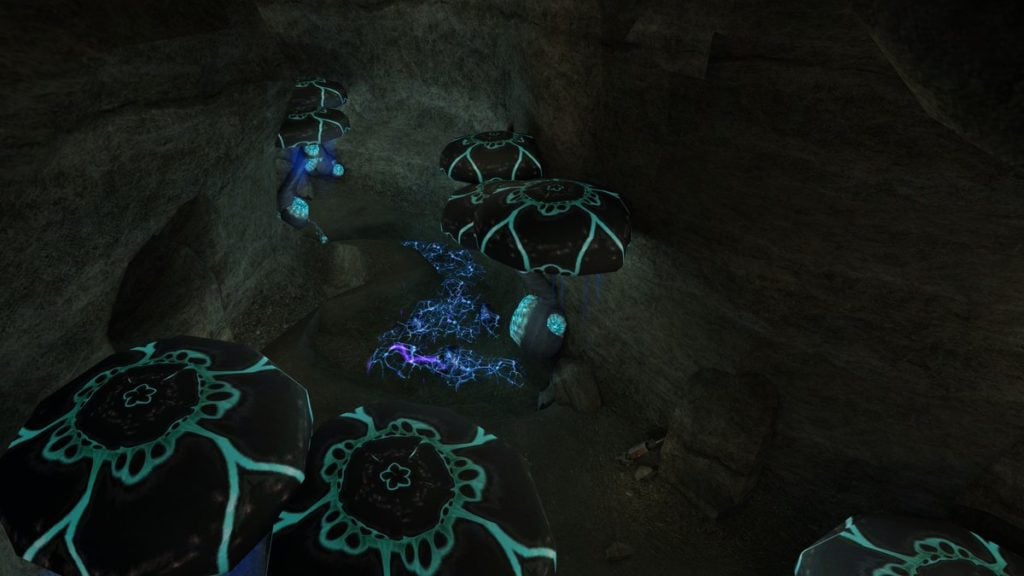 After exploring Phendrana Drifts, Samus eventually treks through the crashed Frigate Orpheon to gain entrance to the Phazon Mines. This massive mechanized realm is the home base of Space Pirate research on Tallon IV, and where the Pirates mine and conduct experiments with Phazon. Its load of scannable lore detail the history of the Mines and the Pirates’ various research projects in great detail, sometimes with scans so densely packed the obsessive scanning they inspire can detract from other aspects of gameplay. The mines are divided into three levels, including a surface level that features heavy machinery and takes place both indoors and outdoors, a lower level that houses several laboratories, and an even lower level of dark passageways riddled with fungi and Phazon.

While these environments might seem to hint at an especially diverse art style, the Phazon Mines are actually the most visually bland and generic region in Metroid Prime. Its tans, topes, and grays with noisy textures are relics of a bygone era where many AAA games and first-person shooters all looked drab and dreary. Prime bucks this trend in every other area, but unfortunately the Mines fall into such tried-and-tired aesthetic tropes. Yet while much of the art here is expressionless (and sometimes gross), it also underscores how poorly the Space Pirates have treated their environment. The total lack of plant life, heavy Phazon pollution, hazy sky, and factory-like architecture stand in stark contrast to both Metroid Prime’s lush and diverse biospheres as well as the Chozo’s more respectful and sustainable settlement. Intentional or not, the Phazon Mines are successful at evoking the aesthetic mediocrity of a power-obsessed society over-reliant on technology. 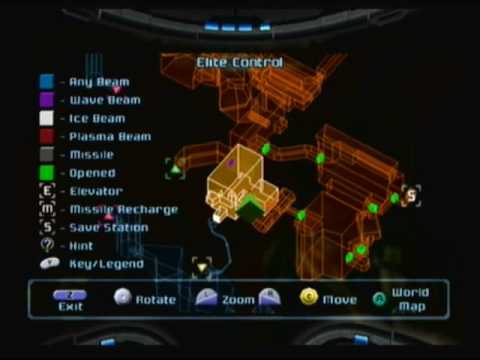 The Mines’ layout continues this trend of cookie-cutter repetition, which snowballs with its bland aesthetic to ultimately culminate in a lengthy series of rooms that are boring, confusing, and frustrating to navigate. Part of the reason for this is that so many of these rooms look and feel identical and none of them are very memorable in terms of art or design. Unfortunately, this is only exacerbated by the Mines being divided up into three levels and the map not dealing with these levels as effectively as it should. While Metroid Prime’s map can be seen as groundbreaking in some regards, the windy, repetitious, confusing layout of the Phazon Mines emphasizes this map system’s shortcomings and adds insult to injury by asking the player to connect the dots between levels rather than depicting them as part of the same whole. While in an area like the Phendrana Drifts the varied architecture and distinct settings make it relatively easy to find a specific room, the Phazon Mines feel as though they were designed under significant time and budgetary constraints, leading to level design antithetical to that of the game’s more deliberately constructed areas. Finally, the Phazon Mines can only be accessed through either the Magmoor Caverns (which is relied on too much as a quasi-fast-travel system) or the sunken frigate (which is even more linear than the Caverns and a major hassle to run through), which makes entering and exiting the area as burdensome as navigating it.

One of the Phazon Mines’ core themes is its industrial setting. In art, lore, and design the Mines define themselves in contrast with the rest of Metroid Prime’s gorgeous world. Here, there is essentially no flora, no fauna, no sense of naturalism, and no authentic sense of place. It is the most artificial and the most contrived setting in the entire game, and this makes it stand out from all the other regions on Tallon IV, which largely define themselves through their unique array of organic settings and inhabitants. Furthermore, the Mines’ architecture and lore tell the tale of industrialism taken to the nth degree, which evocatively contrasts with the values of the Chozo, who seeked to commune with nature rather than conquer, control, and bend it to one’s own will. In this way, the industrial setting proves a fitting final major region of the game, as it takes us on a narrative and thematic journey that underscores the game’s themes of respecting and admiring the inherent beauty of the natural world. 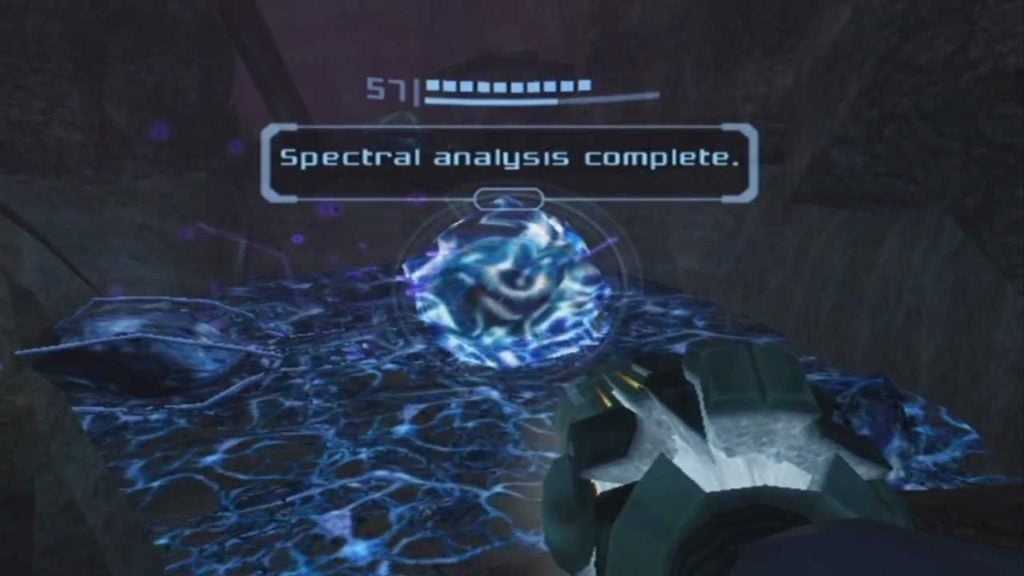 The Phazon Mine is also defined by its relentless series of trials and tribulations that contribute to the sense of Samus entering the belly of the beast. There is a notable difficulty spike in terms of enemy design and number of enemies, and the area’s unfortunate lack of save points pours salt on the wound so that deaths sometimes mean monotonously replaying the last half hour. Additionally, there are tons of locked doors that force the player to defeat enemies (a shoehorned and hasty design decision for a game so concerned about meaningful choice and non-linearity), the lighting is often incredibly dim, and the design of some rooms is outright abysmal, such as the frequently visited Phazon Processing Center. On the other hand, the general increase in difficulty makes combat more meaningful, puzzles more satisfying, and morph ball traversal more strategic and diverse. Meanwhile, Phazon is a less cumbersome and more effective environmental hazard than the Magmoor Caverns’ magma, while the dense lore contributes to a sense of delving deeper and deeper into the heart of enemy territory. 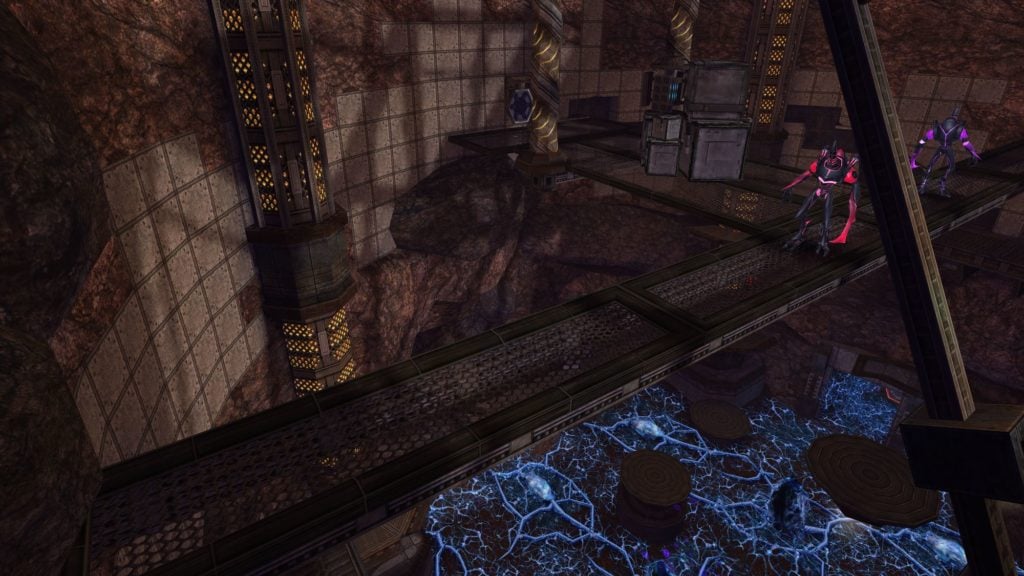 The Mines are home to nine Missile Expansions, two Energy Tanks, two Artifacts, the Power Bomb, the Grapple Beam, the Flamethrower, the Phazon Suit, and the Phazon Beam. The Power Bomb and the Grapple Beam are series staples that work surprisingly well in 3D. However, it is bizarre the game gives the Grapple Beam to the player so late while teaching them how to use it on the Frigate Orpheon. Meanwhile, the Flamethrower is an optional late game evolution of the Plasma Beam whose tepid range make it useless against the large and aggressive late game enemies who Samus is better off tackling from a greater distance. Finally, the Phazon Suit and Phazon Beam are spiffy upgrades that could have been much more thoroughly integrated throughout the game, since the Phazon Suit is really only useful in the Mines and the Phazon Beam is only utilized in the game’s final few minutes.

The enemies here fall into one of three categories: Space Pirate, Metroid, or automated defense. While Space Pirates come in all shapes and colors, there is only one type of Metroid, and only a couple types turrets and drones, so the region suffers from an unusually narrow array of both specific enemies and more general enemy types. Unsurprisingly, dealing with these same enemies room after room quickly grows repetitive and tiresome. On the other hand, the enemies’ shortcomings play into the region’s rote design, which in turn plays into the sense of Mines being overly industrialized. Ultimately, though, this selection of enemies suffers greatly from their excessively derivative design and their dense populations throughout the entire region. Furthermore, these repetitious enemies are tough (and some are arguably an imbalanced difficulty leap over the enemies in the Phendrana Drifts) and often inspire battles that last a bit too long.

The Mines feature three types of mini-bosses and bosses: the Elite Pirate, Phazon Elite, and Omega Pirate. Much like the overarching enemy design in this region, these bosses are essentially all variants of the same basic enemy type, with the Phazon Elite being a Phazon-infested Elite Pirate and the Omega Pirate being the strongest Elite Pirate. Yet despite facing Elites over and over again, the minor variations among these types adds an element of surprise, and all of these bosses are introduced in memorable cinematic fashion. Even though they all suffer from the same rinse-and-repeat offensive/defensive patterns of many bosses in Metroid Prime, these three offer a bit more choice in both combat and defense than a boss like Thardus, and their increased difficulty makes them more demanding and engaging. Unfortunately, the Mines’ poorly placed save rooms can put a significant damper on these fights since some occur nearly an hour from the last save, meaning an untimely loss can be a huge waste of time.

The Phazon Mines are a conundrum in that they stand out from the rest of the game in their blandness and mediocrity. While most areas are grand successes in at least one arena, little about the Mines feels masterful and much of it feels like it was hastily tossed together on a shoestring budget. While Metroid Prime is typically polished to a tee, the Phazon Mines frequently evoke the more generic and less successful shooters of the early aughts, which commonly lacked character and charisma. Almost nothing about the Mines is more appealing than the rest of the game, and although that may be somewhat intentional, the Mines are the only part of the game I remember disliking fifteen years ago, and they are still the only part of the game I don’t look forward to revisiting.