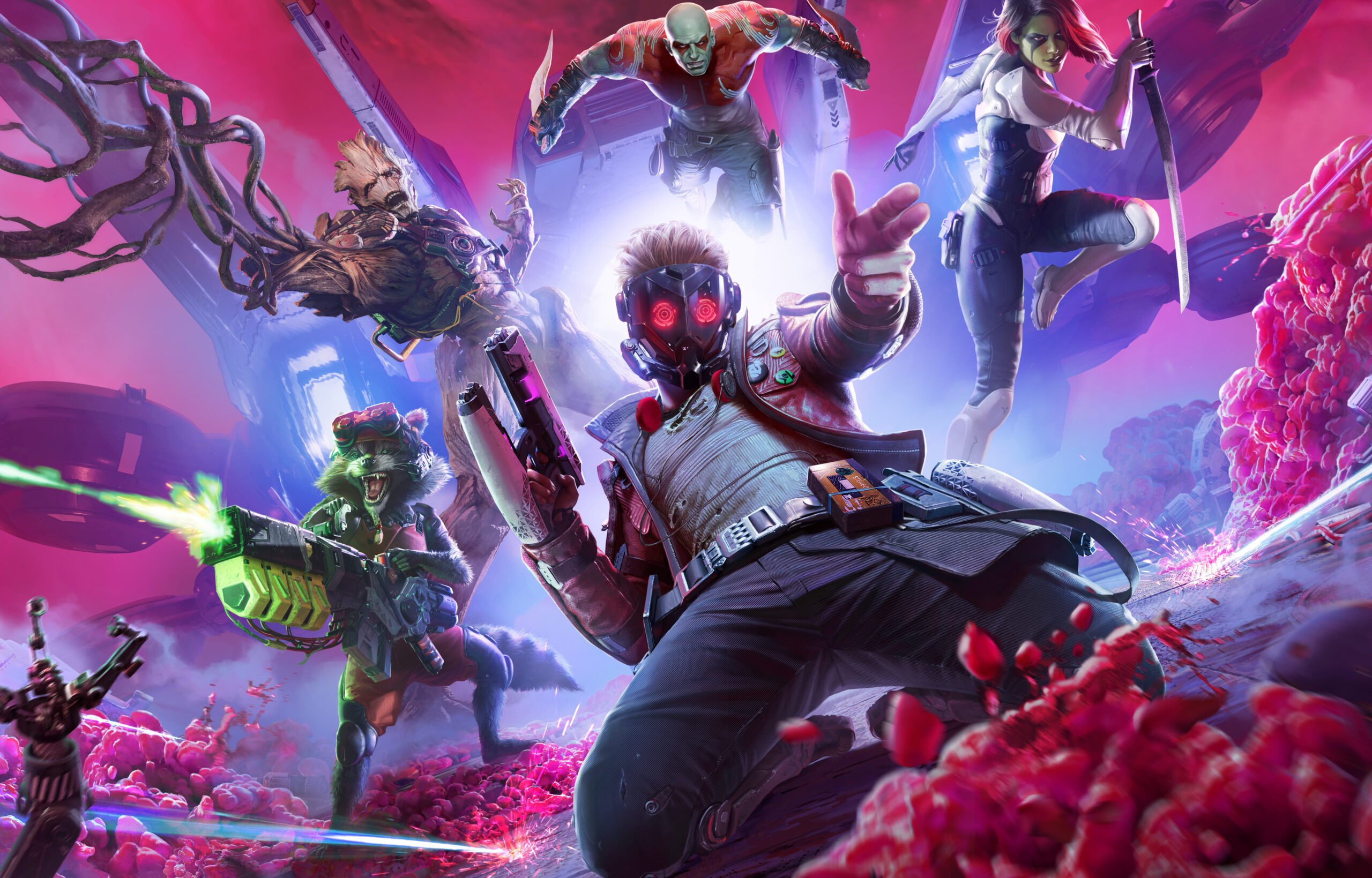 Marvel’s Guardians of the Galaxy Review

With Crystal Dynamic’s 2020 Avengers game, Square Enix’s work on Marvel titles started on a distasteful note. Marvel’s Avengers was an enormous flop for the publisher, and with Insomniac’s upcoming slate of promising Spider-Man and Wolverine projects, the number of reasons to care about what comic book games the house of Final Fantasy still had in store continued to dwindle. Eidos-Montréal had a tremendous weight placed on its shoulders when they were tasked to create a Guardians of the Galaxy game, but their efforts have paid off. Marvel’s Guardians of the Galaxy rocks its way through the cosmos for one charismatic and sincere adventure that will forever be marked as Square Enix’s first true jump into the comic book monolith’s catalog.

Rock and Roll Out

Atmospherically and narratively, Eidos-Montréal’s latest game is a successful hodgepodge of inspiration and originality. It surprisingly culminates into one of the best pieces of Guardians of the Galaxy media you can get from Marvel today. The game combines some of the most prominent aspects of James Gunn’s hit blockbusters, the original comics (specifically the early 2000s Anhillation-related runs by Dan Abnett and Andy Lanning), and its own imagination for one authentic experience. Compared to how Marvel’s Avengers felt like a copycat of its Hollywood heroes, Guardians of the Galaxy flaunts a genuine side that helps it shine against its companions and even works well against them.

Taking place years after a Galactic War disrupted the universe, Marvel’s Guardians of the Galaxy kicks off with an established team of heroes for hire led by the one and only Peter Quill, Star-Lord. With Gamora, Drax, Rocket, and Groot on his contracted team, the recently organized Guardians of the Galaxy embrace freelance missions desperate to scrape by with any credits they could possibly collect. The plot initially starts with a simple animal capture mission but — as to be expected with this crew — goes completely off the rails and results in a world-saving race to the finish. It may have the structure of a generalized comic book story, yet Marvel’s Guardians of the Galaxy is packed with all the magnificent bells and whistles you would expect the team of outlaws to carry with them.

Marvel’s Guardians of the Galaxy thrives in its writing and characters as it pays close attention to establishing a zany cast of icons and nullities. Each player pulls inspiration from their prior incarnations, but rest assured, they are not being flat-out copied and pasted onto the title. The game’s leading superheroes may be the bankable names, but there are so many underdogs (literally) and niche characters stuffed into the story. From Star-Lord and Gamora to Cosmo the Space Dog and Lady Hellbender, every character gives players a tremendous amount of reason to love them. Eidos-Montréal made sure that players would never feel as if they were just filling in names and appearances to be a Marvel game. For a game focused on being a narrative-driven adventure, it certainly succeeds in being one.

Aside from some legitimate comedy that will have you laughing out loud, the Guardians and even the minor characters all get emotional moments that help push their narratives forward. The audience is constantly given emotional beats to sit through and further reasons to care for the heroes they love outside of the fact that they already adore them. Marvel’s Guardians of the Galaxy is constantly building upon the chemistry and dynamics of all its characters. Almost every hero and villain the game introduces never feels wasted in the grand scheme of things as the narrative is rightfully insistent on tieing together all of its factors.

Additionally, players get to decide Star-Lord’s story thanks to the game’s dedicated dialogue trees that offer various gameplay outcomes. All the routes may be tailored to the same end goal, yet the options to see alternate scenarios give the game more replay value as each playthrough carries its own sense of individuality.

On top of an excellent narrative and characters that you can’t help but get immersed in, the game has so many different atmospheres worth taking the time to sit back and look at — it’s a shame that the game designers did not feel the same, though. Marvel’s Guardians of the Galaxy has some beautiful set pieces, yet it rarely gives the player a moment to just take in its grand environments without any interruptions. Sometimes the characters never stop talking and yet other times they will have too little to say. The game dips between either an overabundance or lack of dialogue, especially in the last four chapters. These smaller nitpicks though are far from the game’s largest issue — if anything part of this problem is a good thing to have as players will hate to miss out on conversations.

Fighting to Finish a Great Story

Unlike its dialogue and atmosphere, the gameplay of Marvel’s Guardians of the Galaxy is not always as fleshed out as it potentially could be. In the face of how much care went into the story and characters, perhaps it’s not shocking that the gameplay can feel slightly underwhelming. The game focuses on being a situational third-person action title, but it introduces too many elements a tad too late. The base gameplay of exploring environments for trinkets, solving puzzles, and getting into sparkly shootouts is great, but there could be far more meat on the bones. Commanding your four Guardians while shooting it up as Star-Lord only gets better when the game gives you more to work with.

Many of the gameplay issues in Marvel’s Guardians of the Galaxy are actually solved as players make progress to deck out their arsenal of abilities. Every hostile force in the game can at first come off as complete bullet sponges with inflated health bars. The repetitious feeling players will get comes from the opening’s lack of combat options. As the player slowly unlocks each of the Guardians’ abilities though, fighting becomes a rhythmic flow of attacks that rapidly speeds up — which in turn brings challenge and dynamic to the gameplay that should have been available closer to the start.

The upgrades and unlocks players can obtain feel greatly rewarding, albeit slow to achieve. Each of the four moves the Guardians can perform along with Star-Lord’s enhancements come off as worthwhile abilities to chase after. The number of growing options never feels overwhelming, but it does ask the player to think more strategically with their arsenal. The design for players to only have a select number of abilities at the beginning of the game makes sense, yet it will only make audiences more desperate to get to New Game Plus.

Star-Lord has the basics of a perfect moveset to work with, but Eidos-Montreal should have taken their space smuggler’s movement to the next level. Players could really use more physical fighting options to work with. The main third-person gunplay mechanics are solid and working with the other Guardians is naturally fun, yet fans of Star-Lord know that the superhero uses more than just his signature weapons and quips to gain victory. Players have access to a one-button punch and kick maneuver, but it is never expanded upon. There is not a single upgrade, change, or secondary ability made to this feature — it’s just a simple punch to use occasionally. At the very least, the trade-off for barely using the feature in favor of having a higher focus on commanding the team was the right move.

Unsurprisingly, it would not be a true Guardians of the Galaxy game without a fantastic score, and the game absolutely hits hard with what it has to offer. Eidos-Montreal’s soundtrack rocks with licensed and original music. Without giving away any names, the selection of licensed pop-culture hits from across the 70s and 80s is nothing short of being on par with the blockbuster Awesome Mix Volumes. On top of pleasant orchestral scores, the original album made for the game known as Star-Lord (which indeed inspires Peter Quill’s name) is also exceptional — it seriously sounds like a score straight out of Star-Lord’s childhood years.

It is fantastic to see that both the original and licensed soundtracks have also been thoughtfully implemented into battle. The Guardians are known to fight alongside their tunes, and the special huddle-up ability that allows Star-Lord to rally his team with a pep talk is a good excuse to use its score. Marvel’s Guardians of the Galaxy’s sound mixing may not be perfect, but it certainly makes a commendable effort to make the most out of its orchestral backgrounds for the sake of the player’s enjoyment.

On a separate note, it should be said that Marvel’s Guardians of the Galaxy contains quite a few noticeable visual bugs — at least in the version I played. Eidos-Montreal reassured me that many of the glitches such as jittering models and unloaded textures I encountered would be fixed in a day-one patch. Based on the latest updates released before the review embargo lifted, the developer seems to be sticking true to their promise as many of the bugs I saw on my first playthrough were gone during my ventures into New Game Plus.

This Galaxy Has Been Saved