Back in 1964, Ian Fleming released You Only Live Twice. It was his last James Bond book before his death and featured Tiger Tanaka, an ally to Bond and the head of the Japanese secret service who sends his ninja allies to help Agent 007 attack Ernst Stavro Blofeld and his troops. Three years later Roald Dahl adapted it to the big screen, with Sean Connery in the lead and Lewis Gilbert behind the camera. Much like the novel, the film culminated with a spectacular actions setpiece in which 007 and an army of ninjas invade the secret hideout of the mysterious SPECTRE. The film was a box office hit, grossing over $111 million in the worldwide box office and ever since Western fascination with the ninja bloomed with ninjas appearing in television, movies, comics and everything in between.

While the word shinobi appears in the written record as far back as the late 8th century it’s fair to say that American pop culture has contributed to the worldwide ninja-phenomenon on a grand scale and no more so than the in the medium of video games. In the last 35 years, we’ve seen hundreds of ninja-centric gaming titles that have tried to capture the spirit of the ninja – and while some of them are iconic, most are simply forgotten. For every Ninja, Ninja Gaiden or Turtles in Time, there are a dozen or so ninja games that just aren’t worth your hard-earned cash. 2018 however, has seen not one but two hugely successful games with ninjas at the center of each. It wasn’t too long ago Sabotage Studios released The Messenger, a loving tribute to classic 2D side-scrolling action games of yesteryear — namely, the 1980’s Ninja Gaiden series. Fast forward a few months and the Nintendo Switch was blessed with another superb ninja title – the remastered version of Mark of the Ninja, one of the most critically acclaimed games of the last generation. Playing it for the first time, eight years after its initial release, and it is clear why Mark of the Ninja is so critically adored. This side-scrolling action game developed by Canadian developers Klei Entertainment is one of the best stealth games ever made and one of the best indie games I’ve ever played. 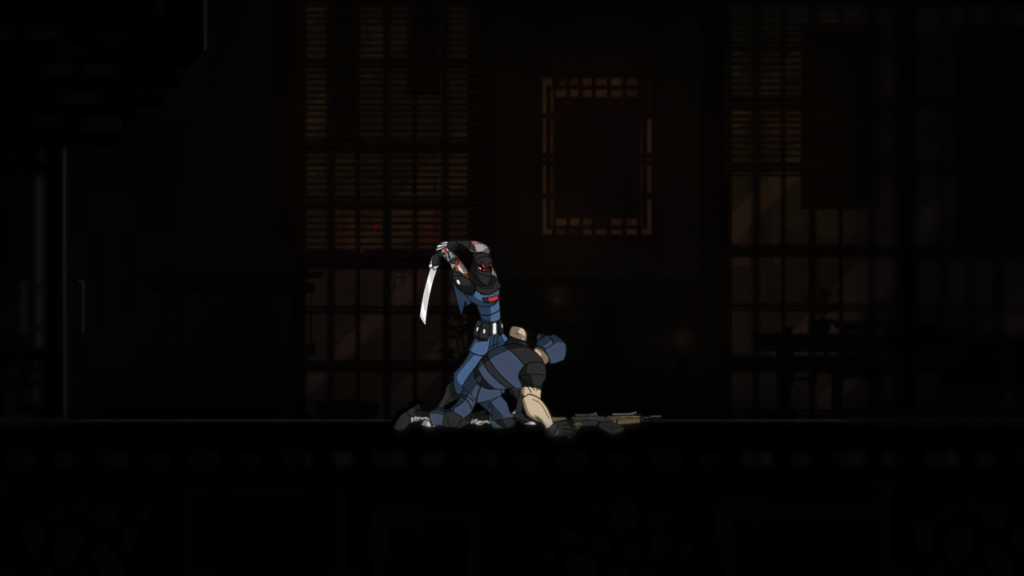 Mark of the Ninja follows the story of a nameless ninja embroiled in a war between the dojo of the Hisomu ninja clan and a ruthless Eastern European plutocrat named Count Karajan. He embarks on a quest with his covert companion, Ora, and seeks revenge on the Count and his army. Before he leaves, our protagonist is bestowed with the titular mark, a tattoo which grants the wearer abnormally heightened reflexes and senses. The catch, however: by bearing the “mark of the Ninja”, the wearer will slowly lose a grasp on his sanity, but it’s a sacrifice he must make in order to save his tribe.

Mark of the Ninja doesn’t feature a story worth writing home about, but for a side-scrolling 2D action platformer, it delivers enough twists and turns to call into question the loyalty of our protagonist’s closest allies while keeping you guessing right till the credits roll. Furthmore, each stage is bookended by a gorgeous animated cutscene that echoes the art style of a classic hand-drawn Saturday morning cartoon and features excellent voice work which goes a long way towards setting the tone and atmosphere of the game. 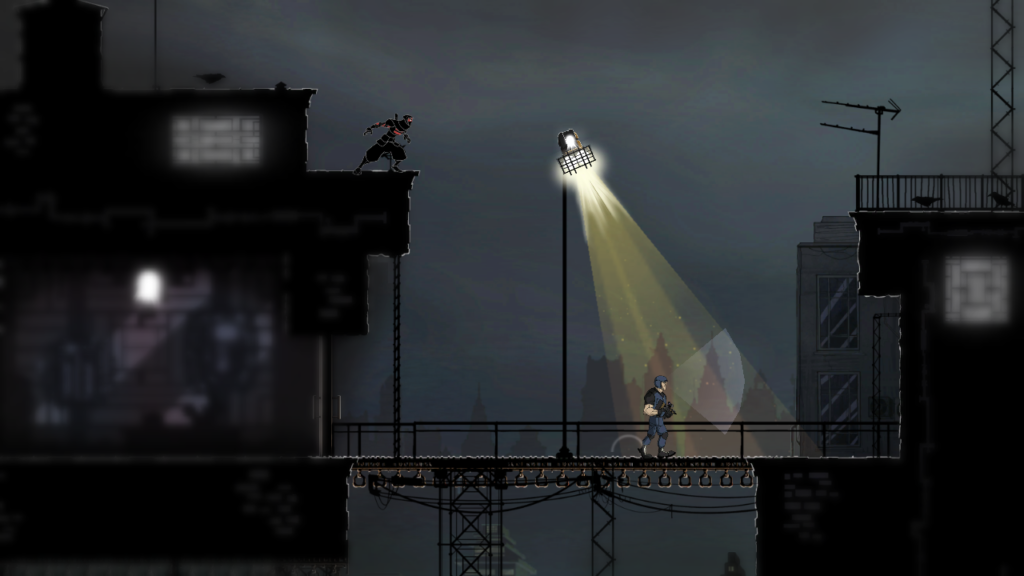 As mentioned above, Mark of the Ninja is a stealth game through and through and it places a heavy focus on the stealth above everything else. Whereas most stealth games nowadays barely feature any stealth, Mark of the Ninja encourages the player to sneak around the environments while performing silent assassinations or hiding in the shadows. Mark of the Ninja’s visuals plays a pivotal role in maneuvering your way across each level as most of your strategy is governed by the light or rather, lack of light. In other words, much like a ninja, you’ll want to move in the shadows and approach enemies undetected in order to execute a “one-hit” kill. To facilitate this, you can extinguish light sources, hide behind objects and pass through narrow grates and shafts.

Sound also plays an important role since your footsteps can give away your character’s location. And if that isn’t clever enough, the sounds of your ninja running are represented visually by way of a translucent blue circle that expands to indicate how far the sound is travelling. Breaking lights, throwing darts or having a dog pick up your scent will alert any guard standing within range. Mark of the Ninja also features a line of sight mechanic, meaning that enemies which would normally be invisible to the character are also invisible to the player, leaving you to rely on sounds to indicate where these enemies are located. The way in which Mark of the Ninja uses sight and sound to enhance the overall experience, is truly remarkable.

Your ninja, of course, does acquire new skills sets and weapons along the way and to some degree your success will depend considerably on the usage of these gadgets which include distraction items (bamboo darts, flares, smoke bombs, and firecrackers) and attack Items (caltrops, poison-tipped darts). Each of these weapons and skills all have their advantages and disadvantages, depending on your playstyle. Meanwhile, solving various puzzles and finding hidden scrolls will reward you with in-game currency known as “Honour” and throughout the game, your character can unlock several costumes after completing a number of seals in the form of optional goals related to the specialty of that costume. In other words, if you sneak up on enough enemies, you’ll unlock a costume that improves your ninja’s ability to startle your foes (it should be noted, however, that many of these scrolls aren’t easily retrievable and requires passing through various difficult, platforming stages).

While it is great to have such a wide range of tools at your disposal (from grappling hooks to smoke bombs and more) what makes Mark of the Ninja so good is how it encourages players to experiment and more importantly, sit poised while you patiently hide in the shadows and wait for the right moment to attack. It helps that each of Mark of the Ninja’s levels is beautifully designed and filled with various traps, hidden secrets, and clever objectives – from freeing hostages, infiltrating a castle, destroying security systems, avoiding guard dogs, scaling rooftops, surviving poisonous gas attacks and solving puzzles. And if that isn’t enough, every level in Mark of the Ninja features multiple paths to completion and allows you to play how you want to play. In other words, while the game does encourage stealth, it doesn’t force it upon you. 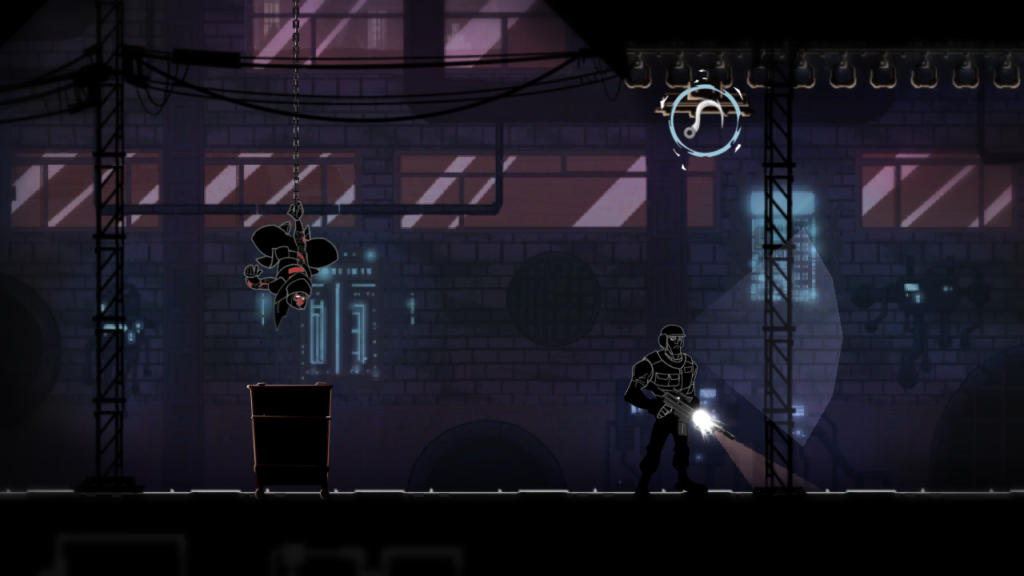 Mark of the Ninja Remastered is a truly amazing stealth game and an excellent re-release that features tight controls, strong art direction, improved graphics, enhanced audio, and a slew of extra content including an entirely new story level, a new character, additional items, as well as the option to enable developer commentary (I highly recommend turning this on).

Mark of the Ninja makes the most of its spare aesthetic, using stylish — and influential — direction, great sound design, and thick atmosphere to weave a thrilling journey. While the ending leaves a lot to be desired, the game still comes highly recommended by this critic. Between Quebec-based Sabotage Studios and Vancouver-based Klei Entertainment, it seems Canadians are the best when making games about covert mercenaries from feudal Japan. I only hope we’ll get more of these games in the near future.