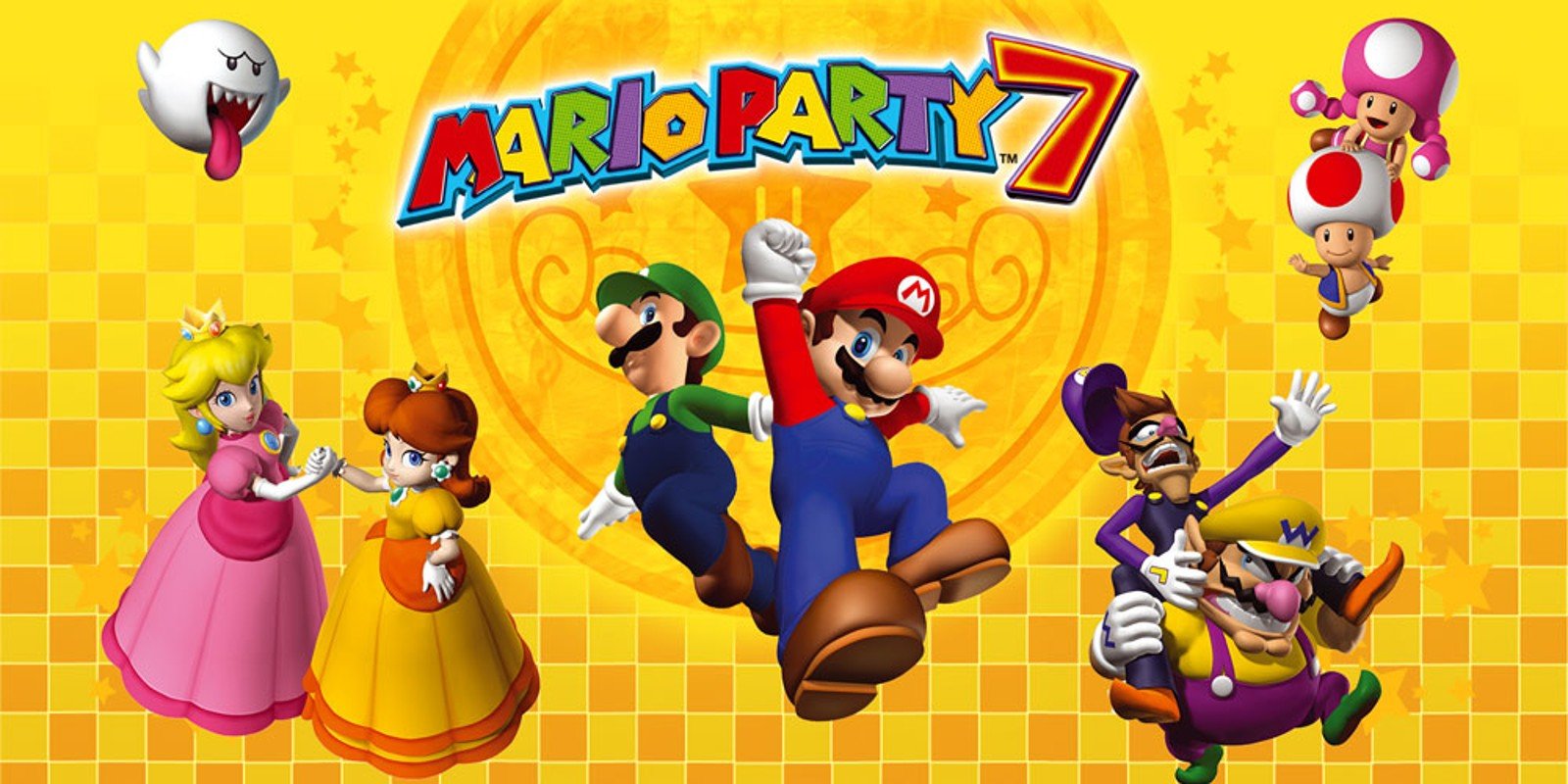 Every Mario Party diehard fan’s dream is to relive the yearly celebrations they wish Hudson Soft had never stopped throwing. 15 years ago today on November 5th, 2005, Mario Party 7 was released to the public and became not only the final spinoff entry in the subseries to stomp its way onto the Nintendo GameCube, but it was also Mario’s last appearance on the console itself for everyone outside of Japan and North America. No one could have predicted that over a decade and a half after its initial release, Mario Party 7 would become Hudson Soft’s last great bash before the developer would plow through plenty of impending critical and financial disasters while the franchise was picked up by NdCube. The bee’s second to last Nintendo success story would not be enough for the company as it was slowly being absorbed by Konami’s Digital Entertainment branch due to both a lack of help from the big N and important leadership roles constantly needing new temporary stand-ins as higherups began jumping ship to other developers. Despite the franchise seeing a new release every year at the time, its GameCube era would only receive the appreciation it deserved years later.

Take Me Back to Party Town

Mario Party 7 was developed directly after the completion of Mario Party 6 and was presumably created under the same roof as Dance Dance Revolution Mario Mix. It may seem almost identical to its previous four entries on the surface, but it is the small refinements and unrepeated presentation that makes the seventh outing more appealing than its predecessors. Whereas most other Mario Party entries primarily stemmed from a warp pipe system or storybook introduction, 7 took quite a turn as the red plumber and friends sailed the high seas for a change. The game’s opening setup is that Mario and the gang have been invited on a high-end luxury cruise trip by Toadsworth, but the uninvited Koopa King and his cronies grow agitated and inevitably attempt to crash the party.

It might be as simplistic as it can get- perhaps even more so than some of the other entries if that can be considered possible- but that introductory structure of Mario Party 7 gives way to a magical outcome that was only achievable through the means of a globe-trotting adventure. From the moment you hit the main menu, the MSS Sea Star cruise ship is arguably the franchise’s most creative hub world to date. Mario Party 7’s initial first impression immediately resonates with a sense of proper organization and wonder. This fancy-looking boat is by far the title’s most under-appreciated aspect. It is the core of the open-ended jack box packed with surprises and an uproaring amount of glowing personality. From that calming never-ending ocean sound effect that can be heard depending on your location to the consistent tone of the boat’s speedy sailing, the game always aims to make the player feel prepared as they embark for their next hangout destination.

The cruise ship isn’t the only thing that resonates those getaway vacation experiences and emotions. Mario Party 7 constantly dons a creative and consistent thematic appearance that is far more recognizable than any of the haphazard approaches its predecessors retained. Rather than focusing on the same character or expected level themes for boards the titles usually play it safe with (grass, snow, lava, etc.), 7 tackles distinctive real-life inspired locations that have been blended into the Mario formula. Whether it’s a New York City skyscraper turned into a film set, an ancient Chinese mountain above the skyline, or grassy plains and hills from the Netherlands, Mario Party 7 is always doing the most it possibly can to keep you attached to its consistent idea of world-hopping by traveling across the ocean. It achieves this so efficiently that going from a pyramid theme park to a lava drenched rollercoaster manages to feel natural and at home with the rest of its exotic board locations- and do not even get me started on the fantastic orchestrations accompanying the maps.

Pegoda Was Indeed The Peak

What the game did most efficiently was cleaning up the core mechanics that the previous console entries had introduced. 7’s goal was clearly to stick to the traditional Mario Party formula that worked best on the Nintendo 64 and GameCube. It does not try and mess with new gimmicks like the day and night cycle or create completely linear maps that lack a variety of events. Playing it safe worked best as the entry was able to refine and solidify the aspects and ideas players enjoyed most with its predecessors. Creating entertaining boards, having catchy music, a constant slew of fun minigames, and a sense of reliance on strategy is where the title excels. The game intricately establishes a risk and reward order of decisions that can start before you even touch your first minigame. Mario Party 7 respects your time and wants the player to understand that every minute with careful thinking can come with a potentially more valuable reward.

The strategic complexity of the Mario Party series peaked with 7 as the mere act of choosing a character became the first step in a long path of consequences. Hitting a dice block to decide who goes first was no longer the first step to securing your victory. Each character in the cast of twelve had specific orbs dedicated to them that could help accommodate or ruin a player’s approach to planning ahead. Specialized character orbs obtained during the game could decide whether you would be breezing through extra dice blocks, stockpiling bonus coins, or stealing items from other players. Choosing who you were going to play as and what board you were playing on with friends were decisions intertwined with creating a needed pre-game plan to succeed. The way in which orbs were overhauled completely altered the way in which players could approach this entry. The game was already afoot for those most knowledgeable before it could even begin which ultimately created a more exciting and competitive atmosphere for those who thoroughly studied and learned its mechanics.

The distinctiveness of Mario Party 7 did not just stop there though. It was the only entry in the entire franchise to introduce multiple ways of experiencing boards and mini-games through several dedicated alternate modes. Deluxe Cruise has been the only instance where eight players could participate in a single Mario Party match- though the feeling was artificial as it was split into teams of two where pairs would share a singular controller, but in turn, it then arguably introduced a new form of cooperation. Minigame Cruise allowed players to select how they would experience playing minigames through multiple competitive modes, whether that be through something akin to a tournament where players would climb a waterfall or a simple score counter featuring a submarine esthetic. It was the last ever Mario game where the mainstay spinoff cast of the original Koopa Kid quadrilogy and microphone minigames would make an appearance.

Perhaps just like all these various features (and characters cause who would dare discount Bowser’s missing minions?) that disappeared in a matter of one sequel, the franchise has growingly suffered from a lack of those familiar feelings over the years. Those special quirks the franchise once proudly flaunted were gone once Mario Party 8 hit the scene and primarily focused on the Wii’s audience while juggling a reckless and unfocused development cycle. That constant creativity and accessibility you would find in a Mario Party entry are just no longer there today with NdCube’s disappointing continuations since Nintendo abandoned Hudson Soft and the developer had been dissolved into their parent company’s branch of developers after being finally bought out entirely.

To critics, Mario Party was never a game to pop a bottle of champagne, blast music, and have a blowout celebratory dance over. It has historically been known for poor critical reception throughout its run among the vast majority, even going as far as to make Nintendo of America’s former chairman hand out signed certificates to critics for giving the iconic spinoff series shockingly low scores. Like its last six entries, 7 suffered from the burden of extremely mixed critical reception, yet it still managed to achieve notable sales numbers considering the GameCube’s dwindling play base as interest in the upcoming “Nintendo Revolution” (later revealed as the Wii) was on the rise. Most critics who had enjoyed the previous Mario Party entries at the time claimed that the series was facing fatigue. Despite its promise of a world cruise with plenty of variety, critics just thought it did not provide enough to differentiate itself from its predecessors. That might just be 7’s most ironic aspect of its legacy, however.

To audiences today, Mario Party 7 is regarded as not only one of the best GameCube series entries, but quite possibly one of the franchise’s most pristine releases as it attempted to refine what players loved about Mario Party 4, 5, and 6. Over the years Pagoda Peak, Windmillvill, and Neon Heights have become some of the franchise’s most talked about game boards. It’s odd inclusion of an eight-player mode and an eccentric number of ways to explore mini-game competitions have never been quite explored again like they were in 7. While it may have released during a time where the franchise was receiving negative reception for its failed innovation, Mario Party 7 retrospectively may have just provided the most variety and upgrades out of any of the former GameCube entries. It was the last time where the series would see its most revered controller, traditional structure, merchandise galore, and live-action commercials. It’s the entry whose artwork is still being utilized today for Nintendo’s promotional material and products.

Mario’s yearly parties later came to an abrupt and unfortunate end as Hudson Soft prepared to brace itself for their most challenging entry in the series to date, which would ultimately rip them from Nintendo’s own hands and allow the franchise to face a concerning hiatus. 15 years ago, Mario Party 7 was just another entry in everyone’s favorite go-to party mood killer. 15 years later, however, it finally has received the appreciation it perhaps always deserved as the franchise sadly saw its crashing downfall when its sequel entry released out of schedule two years in the future and NdCube later took the organizer’s chair. The latest Switch entry has shown a promising future for the franchise, but every longtime Mario Party fan is still wishing they could head back to the party town we all loved to squabble in.