Editor’s Note: This article was originally published on March 2nd, 2017 for the ten year anniversary of Crackdown.

10 years have now passed since Microsoft and Realtime Worlds had us jumping around Pacific City in Crackdown. 2007 was a groundbreaking year in the history of gaming; one only has to remember the release of titles such as Call of Duty 4: Modern Warfare or Bioshock to get an idea of that year’s importance in the industry. Crackdown may not be in that echelon from a critical standpoint, but it is important to look back and understand its place in gaming history, for the DNA of Crackdown can be observed to this day.

Of course, the main reason many people will remember Crackdown is due to the Halo 3 multiplayer beta that was included. This proved to be a masterstroke from Microsoft, propelling Crackdown straight up the best-sellers lists and putting a game into people’s homes they may not otherwise have even considered. It is curious that such a marketing tactic has rarely been repeated, but crucially millions of people now had, in essence, two games in one. The Halo 3 beta was a full game to many in the build-up to the main game’s release in 2007, yet it did not take long for people to see what Crackdown had to offer. 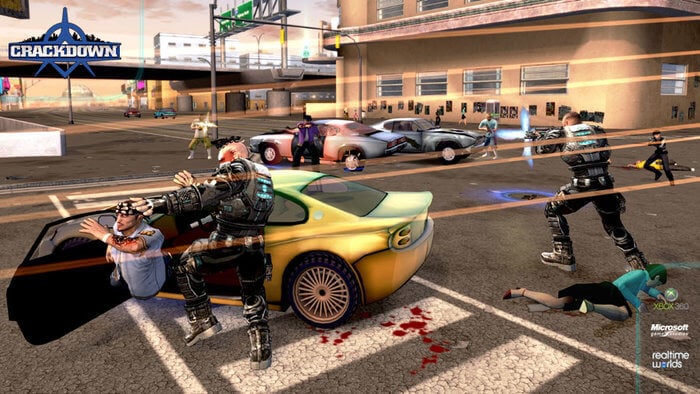 Hindsight is a beautiful thing, and 10 years on, Crackdown holds a unique place at the start of the open world revolution. The next few years post-2007 would see the emergence of a large proportion of games containing huge sandbox worlds, offering greater degrees of movement and freedom. The former certainly epitomizes Crackdown, allowing the player to jump great distances and heights across the game’s metropolitan world. The crime-ridden hive of Pacific City won’t be remembered for its engaging characters or vistas, even when narrated by the phenomenal Michael McConnohie (also known as the Mass Effect codex among many other roles), but that was never the goal. Absorbing orbs to jump higher and higher was the honey trail at Crackdown‘s core and paved the way for the numerous collectible-driven open worlds now dominating our libraries.

The legacy of Crackdown is perhaps one of the most understated. Before 2007, first-person-shooters were only just beginning to dominate the industry, a turn which would be cemented with Modern Warfare, and 3D platformers had yet to bow out. Gaming was vastly different from its current form, and much of its subsequent transformation can be attributed to Crackdown and Realtime Worlds. Yes, the gunplay was loose and not all that satisfying. Yes, the story was a wet blanket. But the worlds we occupied and put our hearts and minds into would soon become much larger. Not bad for a game bundled alongside the Halo 3 beta.