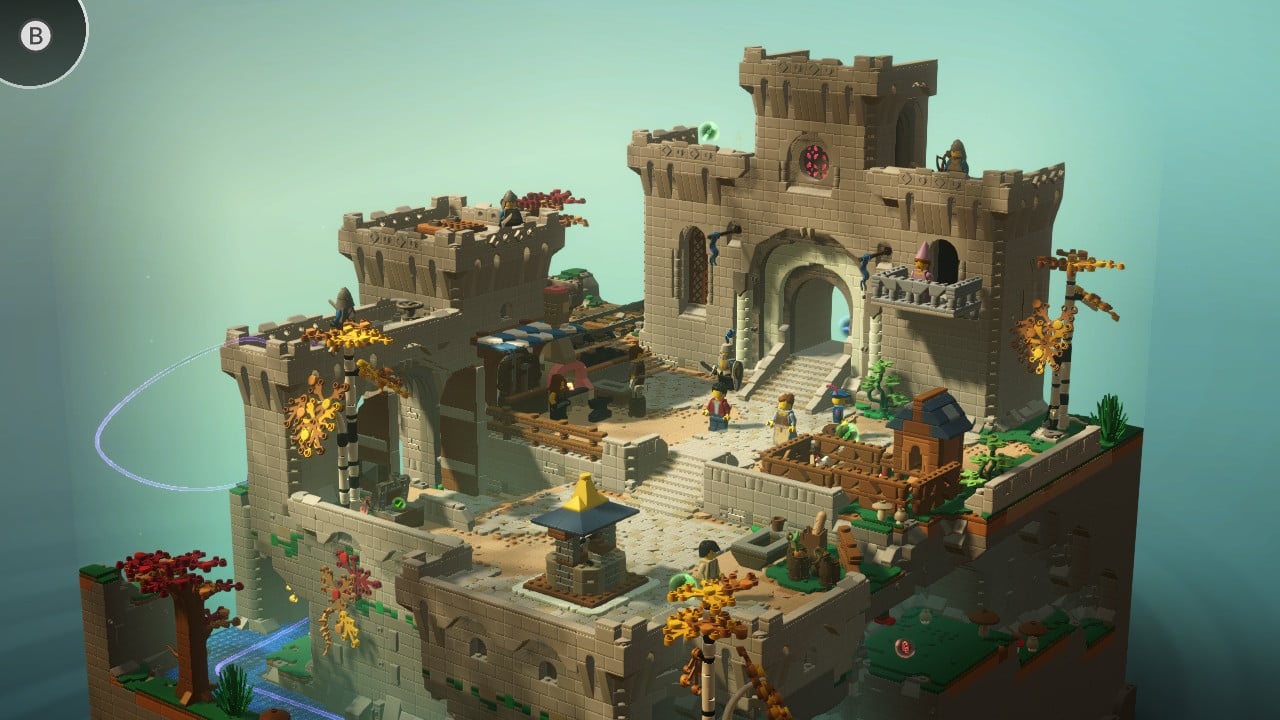 LEGO Bricktales, the new physics-based puzzle-adventure game from the makers of the Bridge Constructor series, is simultaneously a triumph and a disappointment. It shines brightest in its variety of puzzle designs, ranging from simple decoration exercises to surprisingly complex engineering dilemmas, with each puzzle being built brick-by-brick using an intuitive and precise control scheme. Additionally, LEGO Bricktales’ detailed dioramas are consistently beautiful to look at, featuring catchy music and delightful sound effects that make for a joyous brick-building atmosphere. The experience is, however, marred by issues of varying severity.

While LEGO Bricktales is a perfectly competent adventure game, its plot is bare-bones and at times feels constructed merely as an excuse to create scenarios for puzzle segments. As a result, the characters are rarely anything but forgettable and one-dimensional, and while each of the five worlds has its own charm, there is something unmistakably soulless about how each of the pieces fit into the whole. Moreover, the performance on Nintendo Switch is less than ideal, with frame-rate drops being fairly common in larger puzzle sections and a variety of glitches that range from completely inconsequential to preventing 100% completion.

Each section of LEGO Bricktales is a fun mini-adventure filled with brain-teasing puzzles, the best of which being nothing short of excellent, but the way that these adventures coalesce leaves much to be desired.

The premise of LEGO Bricktales is remarkably straightforward. Your grandfather wishes to re-open his dilapidated theme park but lacks the materials to do so, and the only way to help is to hop in his portal machine and help people across five different worlds to make them happy and generate friendship fragments. It’s a cute sentiment — that dreams can be achieved through making friends and being happy — but unfortunately, that is the extent of the game’s message.

Unlike the rather profound and abstract adventure in LEGO Builder’s Journey, which conveyed powerful themes of creativity and the importance of nature in an increasingly industrial world, LEGO Bricktales has alarmingly little to say. It’s a puzzle game first and an adventure game second, which is hardly a bad thing in itself and makes perfect sense given the developers’ prior work on the Bridge Constructor series, but perhaps this title would have been better as another pure puzzle game rather than attempting to inject a Metroidvania adventure into the mix.

The adventure is split into five visually distinct worlds, featuring a dense jungle, an Egyptian pharaoh’s tomb, a bustling metropolis, and more. Within these worlds are characters who need your help, and through magical brick-building powers, you can construct a wide variety of structures and objects to aid the local population. Seeing your creations come to life, such as making a small helicopter that can ferry characters across a ridge, can be quite a satisfying experience. Additionally, being able to rotate each LEGO diorama to find secret pathways and hidden entrances is a fun little hide-and-seek exercise, but optional exploration and collectible searching is more-or-less pointless until after all five color-coded abilities have been unlocked in the five worlds. Plenty of hidden chests and secrets are locked behind these abilities, and going back to get them after finishing the story is hardly a time-consuming experience, so all in all the collectathon element of LEGO Bricktales is handled well.

There are some issues with the exploration and adventuring aspects of LEGO Bricktales. For one, the green Hieroglyphics ability that lets players see the unseen is far too difficult to spot in the overworld, making 100% completion sometimes a case of tediously searching each nook and cranny to find a tiny icon which flashes once every few seconds. Comparatively, the other color-coded ability markers are easy to spot, making this issue all the more puzzling. One particular hidden chest in the first region took a considerable amount of effort to find due to low lighting largely obscuring the green Hieroglyphics icon, which made for an unnecessarily frustrating detour. Furthermore, the reward system feels lackluster, with the grand reward for picking up all the animal collectibles being simply more chests of currency to buy outfits in the shops. Customization options aren’t unwelcome, but it would have been nice to have, for example, extra optional puzzles to unlock as a reward for exploring which would feed into the core gameplay loop.

Given the underwhelming overarching plot and characters, it’s safe to say the main attraction of LEGO Bricktales is its brick-building puzzle segments, and these puzzles certainly do not disappoint. Almost every puzzle is mandatory for story progression, which is a bit of a shame since optional challenge puzzles would be a fun addition, but as it stands the puzzle segments are generally creative and challenging enough to keep things interesting without causing frustration. There are a couple of exceptions. For one, an unexpected difficulty spike in the fourth world involving building a four-storey fire escape with remarkably few pieces available took multiple hours of iterations to solve, which felt a little unfair given the generally forgiving nature of the puzzles. A cursory knowledge of physics is needed to overcome these hurdles, but nothing was so daunting it felt insurmountable. A degree of patience is certainly required to tackle LEGO Bricktales’ most demanding challenges, such as building a rain catcher with a very small margin of error.

The interface with which these puzzles are tackled is one of the highlights of the experience. Bricks can be duplicated on command so long as copies of them are still remaining, making building large structures a less tedious experience than individually picking up pieces from the ground. The camera controls are finicky at first but can be quickly mastered in order to zoom in and inspect each piece. Some puzzles require a physics simulation before they can be completed, involving static or moving objects being placed on top of the structure to ensure it is load-bearing, but barring a few exceptions these segments are relatively straightforward. Admittedly it was frustrating when the aforementioned fire escape puzzle had four robots descending down the staircases at once rather than one at a time, especially given the robots can very occasionally glitch their pathing and wander in the wrong direction, but none of these issues ended up being game-breaking.

Once a puzzle is completed, a sandbox mode can be activated which grants additional bricks as well as removing the brick limit to allow for more intricate designs. This is merely a victory lap that allows players to come up with more fanciful ideas after the initial requirements have been satisfied, and is a fun extra tool to play around with. Any puzzle can be revisited at any time, and each puzzle has three slots for solutions which allows for experimentation without having to overwrite pre-existing solutions. What really makes some of these puzzles special and memorable is the extra optional requirement of finding collectibles only accessible by re-solving the puzzle. These “a-ha” moments of realising that an alternate solution leads to a ledge with a collectible on it are nothing short of excellent, and the first time I noticed a bunny on a high ledge that is only reachable by completely redesigning my decoration to form a staircase was borderline magical. It’s a shame these opportunities don’t come up much more often, because every time it adds an extra layer of optional complexity that enhances the quality of the puzzles without fail.

Teasing Excellence in an Underwhelming Adventure

Despite having much more substance than LEGO Builder’s Journey, LEGO Bricktales has less personality. Each region is fun by itself, but the restoration of the theme park being the overarching plot falls completely flat by the time it reaches its abrupt and underwhelming conclusion. Only a select few characters are memorable at all, one of which being a trigger-happy cannoneer who blows things up solely so that they can be rebuilt by the player for extra gameplay. It’s glaringly obvious that the entire story setup is nothing more than an excuse to do brick-building physics puzzles, which feels like a waste of potential in the adventure genre. Had it simply been a puzzle game with a set number of levels and unlockable challenges, the puzzles — which are without a doubt the highlight of the experience — could have shone equally as brightly without having to worry about merging it into an adventure game.

As it stands, LEGO Bricktales is a perfectly adequate puzzle-adventure title. It does everything it sets out to do and only occasionally falters, but it could have been so much more. The Metroidvania elements feel like arbitrary and unnecessary additions, as it would have been much more satisfying to have more opportunities to reach collectibles through clever brick-building puzzle solving instead of merely picking the correct colour of ability to utilise in the right spot. The dialogue is occasionally funny but at times felt barely worth paying attention to. There are enough glitches present to cause anxiety in not knowing whether a puzzle will unexpectedly become unsolvable and block progress. If it weren’t for the occasionally stellar puzzles, it would be difficult to recommend LEGO Bricktales, but as things stand this is a worthwhile experience for any player looking for some fun LEGO-themed physics puzzles in a visually charming world.