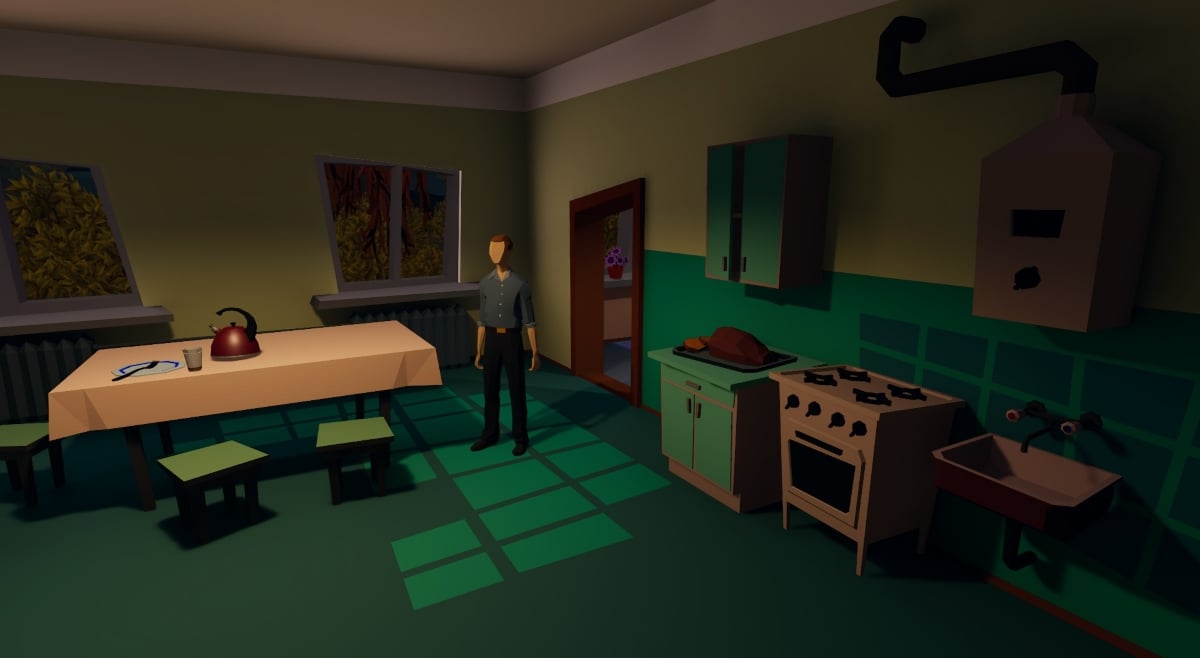 Ever fancied just shutting off and taking a stroll down the well-trodden paths of childhood or early adult memories? As luck would have it, Know by Heart by indie developer Ice-Pick Lodge lets gamers do just that, except in the mind of someone else. Serene and full of a quiet yearning for the past, action isn’t the first thing on the agenda when it comes to Know by Heart and those in need of it would be advised to steer well clear. On the other hand, those in search of tranquillity and a little peace and quiet have come to the right place.

On the face of it, the basic premise of Know by Heart is sound. Misha, a train station worker in a backwater post-Soviet Russian town, gets back in touch with a couple of close friends who are visiting from other cities after having moved on to better things. Sauntering around town, they reignite old memories and revisit old haunts, all the while piecing together pieces of cherished photographs from their earlier years. It’s also a game about loss, as Misha will come to learn only too well.

However, the execution of that same plot can be rather dull. It’s more show than tell, the majority of time being spent on spectator-like exposition. The story itself isn’t bad, but at the same time, it’s nothing special, and other than a few repetitive puzzle piece minigames the player isn’t forced to engage with it on anything more than a superficial level. Instead of a game, Know by Heart at times feels more like a glorified sightseeing tour. Which isn’t terrible, but it could do with a little more.

Onto the technical side of things. For the PC, at least, instead of movement via the standard mouse keys of WASD, Know by Heart opts for a point and click system, requiring the player to hold the cursor on the edge of the screen in order to keep Misha moving a certain direction. It’s fine and it works, but it does feel rather limiting, establishing a slight disconnect between Misha and the player. WASD simply offers more freedom, connecting the two, meaning they’re moving in sync with each other.

One thing that Know by Heart doesn’t suffer from is poor grammar, a malady which afflicts (or, more accurately, self-afflicts) a lot of low-budget indie titles. When it comes to the dialogue, there are actually rather vivid descriptions and inspired reminiscences, at least between Misha and Asya. However, some of the minor characters and random street NPCs could use some fleshing out. There’s a couple of randomers who speak the same flat filler lines, one being to the effect of, ‘I love the park. It’s beautiful’. A five-year-old could have stated as much. Save for Misha and Asya, the overall voice-acting is amateurish at best. The fact that the characters speak in thick Anglophone accents in what is supposed to be Russia can easily be overlooked, however.

On the plus side though, Know by Heart is very nice to look at visually. There are pleasant leave effects, crisp graphics, and seamless water around the game’s world. The street architecture, though generic in a faceless post-Soviet kind of way, is weirdly endearing with the sun shining on it. Interestingly, the characters have no facial features, which is no problem. It’s actually one of the most memorable things about Know by Heart–a nice little gimmick, that other indie titles should take a note of inspiration from.

Speaking of the post-Soviet Russian setting, it does come in, but it’s mostly just a backdrop to the main story. Although there are passing references to ‘artistic types’ and one too many police walking about, other than that, this could just be any other town and any other tight-knit but long since separated circle of friends coming back together for one brief moment. Which is not to criticize the choice of setting. It is nice to be somewhere that isn’t Europe or North America for a change. Besides, the universal message of long-lost friends reuniting for a last hurrah is a message that can apply pretty much anywhere.

When it comes to the general verdict on Know by Heart, there are certainly far worse ways to spend four or five hours, but there is also far better ways as well. Should anyone want to take a casual break from the demon-infested dungeon crawlers and action shooters with the express aim of not doing anything other than a casual stroll, then pick this up, because that’s what you’ll be doing.