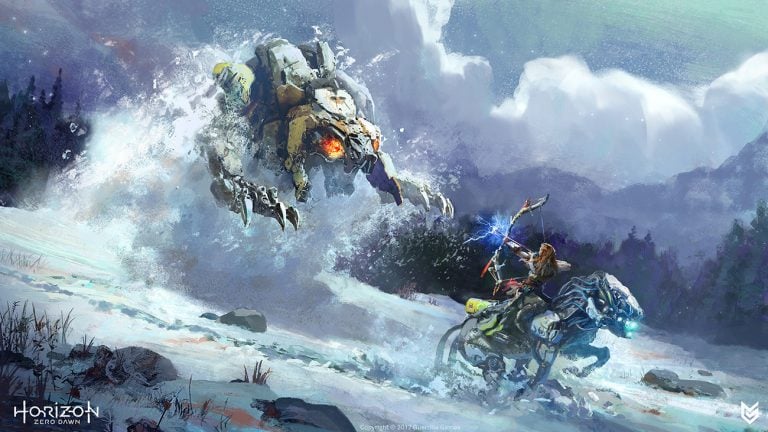 The fact that Horizon Zero Dawn isn’t my game of the year still baffles me to no end. I picked the game up in March, a week or so after its UK release, and for the month that followed I was absolutely hooked; Aloy and her co-cast were fleshed out characters born from the machine-dominated future, not just the one-dimensional clichés often found in various post-apocalyptic settings. The unfolding plotline had me enraptured; the audio logs from the old world, a gameplay device for a backstory that I usually hate, were so powerful and human that I found myself searching out each and every one to get a fuller picture of the fall of modern society. The graphics, both photo-realistic and colorful, were stunning, and the human characters seemed alive. Even after I’d done pretty much everything the game had to offer, I found it had to put Horizon down to move on to the next thing.

And then, with NieR Automata and Breath of the Wild, I forgot about it, and I feel like everyone else did, too. Think what you want about 2017, but it’s been a solid year for game releases… sometimes to the detriment of great games.

But, as if walking out of a memory, Horizon Zero Dawn’s expansion pack came along a week ago, almost nine months after the game’s initial release—and enough time has passed to visit a great game afresh.

The Frozen Wilds takes Aloy to the Cut, a bleak wasteland attached to the north of the game map. While there, she encounters the Banuk, a large tribe whose survivalist tendencies are forged by their environment. Speaking of which, the Cut is absolutely gorgeous—I didn’t think it was possible to surpass the base game, but The Frozen Wilds is absolutely screenshot bait (and, fortunately, the game still has a great in-menu photo mode). Aloy decides to involve herself in the problems plaguing the Banuk, involving a new malfunction with the machines. The truth behind this issue could shed some light on her main quest.

The set-up for the expansion is simple; the plot doesn’t answer any major questions from the end of the main campaign. Where the plot excels is in its characters. Questions of belief and pride intersect with the nature of the regressed world. In particular, the characters of Ourea and Aratak, the shaman and chieftain respectively of a major Banuk sub-tribe, seem fully realized as individuals with extensive histories and personalities reflected from the world around them. Their humanity is aided by improved facial capture technology; every little tic is captured, every aspect of their anguish expressed. The motion capture wasn’t bad in the main game, but in The Frozen Wilds, it stands above anything I’ve seen before, if only for its subtlety.

The expansion’s main missions and gameplay also do not add much or change any main gameplay systems; instead, The Frozen Wilds adds new enemy machines, and new weapons for Aloy to use. The machines are, as their main game counterparts, fearsome and impressive in equal regard; the first barrier to entering the Cut is a Scorcher beast, a mechanical hyena, though the head seems reminiscent of a bat. It took me several tries to beat this first Scorcher. As with the original game, however, enemies become easier to manage once you know their weak spots and animations. That still doesn’t make it any less exhilarating when you unknowingly encounter these fiends in the wild.

The new weapons, too, are interesting, although not as satisfying to use as the classic bow from the main game. These weapons are elemental in nature and seem to be balanced against the new enemy types, but for most of the expansion’s runtime, I used the original bow-and-arrow combo with no issues. The expansion’s new additions are hard to master, and replicate the learning curve of the original playthrough.

To state the obvious, there isn’t a lot that is new here. If you didn’t like Horizon Zero Dawn, you won’t like it with the addition of The Frozen Wilds. If, like Randy or I, you loved Horizon, you’ll love The Frozen Wilds. And if you never tried Horizon Zero Dawn around its release, due to the influx of great titles released in the February-April period, now is the perfect time to pick it up.