Nearly ten years ago one of the greatest schisms in the Pen and Paper gaming world created the disparate games of Dungeons and Dragons 4e and Pathfinder. The former is often seen as the worst iteration of DnD to ever exist, while the latter is the fan’s reaction and an attempt to update the wildly popular Dungeons and Dragons 3.5e to resolve lingering issues. Since then Pathfinder has gained a solid following thanks to its popular and flexible rule set and it’s open-source nature, but it’s lacked the mass-market appeal that DnD had thanks to games like Baldur’s Gate and Icewind Dale.

Now, following in the footsteps of these greats, and thanks to a successful Kickstarter, Owlcat games and RPG legend Chris Avellone have attempted to bring Pathfinder to the digital realm. Is this a throne worth sitting on, or just an imitation crown?

Shockingly the story of Kingmaker starts not in a tavern, but in the great-hall in the middle of a gathering. You are an adventurer, created prior to the opening of the game, who’s answered the call to kill the bandit chief known as the Staglord and claim the Stolen Lands as your own fiefdom. Shortly thereafter the hall is attacked and you’ll need to fight your way out, making decisions and meeting various other adventurers along the way. Finally you’re let loose on the Stolen Lands and after battling the Stag Lord you’ll be in charge of your own little kingdom, dealing with problems like invading armies and what to do with old ruins you find.

The plot of Kingmaker is decidedly less involved than most CRPGs of this nature, although given the combination of gameplay styles that does sort of make sense. As expected nearly every conversation lets you make choices to affect the story, here painted mostly by the different alignments, with some options blocked out if your character doesn’t match that moral pattern. For the most part the individual stories are decently told, featuring a lot of memorable characters with plenty of backstory, although occasionally the background lore of someone might feel muzzle-loaded after they give your their life’s story in the first 30 seconds. 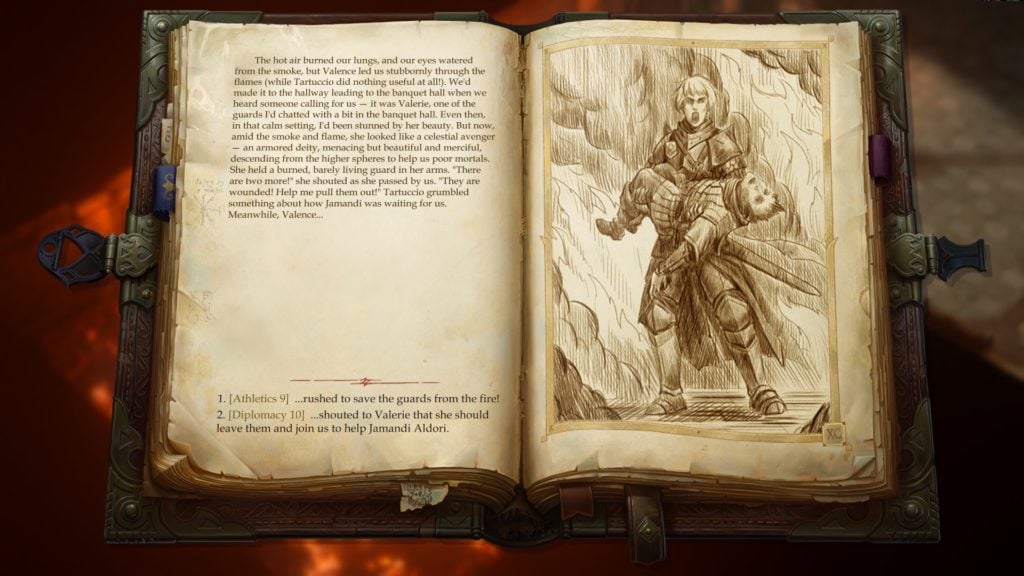 The big problem is that the plot almost completely dries up following the first major event of the game, specifically you claiming the Stolen Lands and setting up shop. Were the plot written on paper, at this point it’s put through the shredder and only one or two narrative strands remain. Recent games like Pillars of Eternity and Divinity 2 occasionally suffered from the same thing, but at least in those there was always something left of the main plot to push you forward. Here, if you don’t select the correct events from a backlog, the plot somewhat literally dries up and disappears.

Sometimes Kingmaker just seems to suffer from the Fallout 4 issue of dialog choices, being that you have an option to say yes, an option to say yes differently, an option to say yes as an asshole, and an option to say no and cancel the quest. A good example of where this really falls apart is an early encounter with some slavers, who offer to fight you or buy a companion. Choosing to fight them is incredibly difficult as they’re more powerful then your party is at the time, so you’ll need to sell a companion, which weakens you in further encounters till you get them back. There’s no option to pay the slavers off, scare, or coerce them away, or even send them to easier prey, and its a striking moment showing a lack of depth in the player agency.

That lack of agency carries on, too. Far too many of the quests don’t have multiple outcomes, although some of them offer alternative means of completion. It’s weird to see this step backwards, especially since that’s something that’s been intrinsic to the genre for a very long time. Occasionally you will be allowed to make a bigger choice, especially when you unlock the town-management aspect of the game, but your choices only rarely seem to have any major effect, to the degree that some seemingly major choices in the introduction can immediately be undone a few hours later with no repercussions. 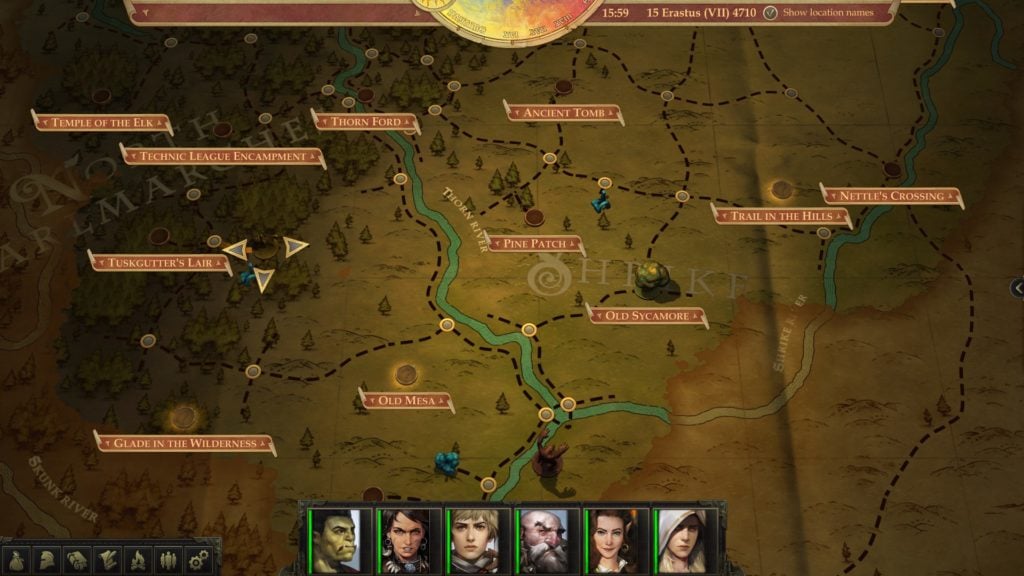 Traveling around the map is done by moving from intersection to intersection, revealing more of the map as you go

Gameplay also shows a lack of innovation. As expected you spend the majority of your time pointing and clicking your party of up to 6 adventurers through different locations, fighting and looting and interacting with people, places, and things. The whole thing is very familiar to genre veterans and anyone coming from Pillars of Eternity will feel right at home. If nothing else what the game does get right is the player feedback, particularly with the UI, with little tooltips offering hints, as well as descriptions and explanations for every item and concept.

However, where the game really takes a step back is in its rigidity. Like Baldur’s Gate this is a game firmly rooted in the rules of its tabletop counterpart, which was fine in 1997 when we didn’t know better. But recent games like PoE2, Torment: Tides of Numenera, and Divinity Original Sin 2 have shown what can be done when digital RPGs remove the tabletop element. The answer is really great things, and returning to that rigid format feels frustratingly slow at times.

Where this is most obvious is the ability-heavy classes – particularly magic users. In PoE2 or Divinity OS 2 mixing in casters with martial focused characters feels good because casters can be used pretty regularly, with their abilities either per-encounter or just on a cool-down. Kingmaker returns to the older style of giving casters a set amount per-rest, which means that if you use up all your abilities in a single fight you now need to sleep for 8 hours before going back to work. In a table-top setting this works better, first because there’s much more freedom in how you can use many spells, and second because in most cases you’re only going to be doing 1-2 fights during a normal session. In a video game though, the desire is to constantly move forward, and that’s totally hamstrung by relentless resting. 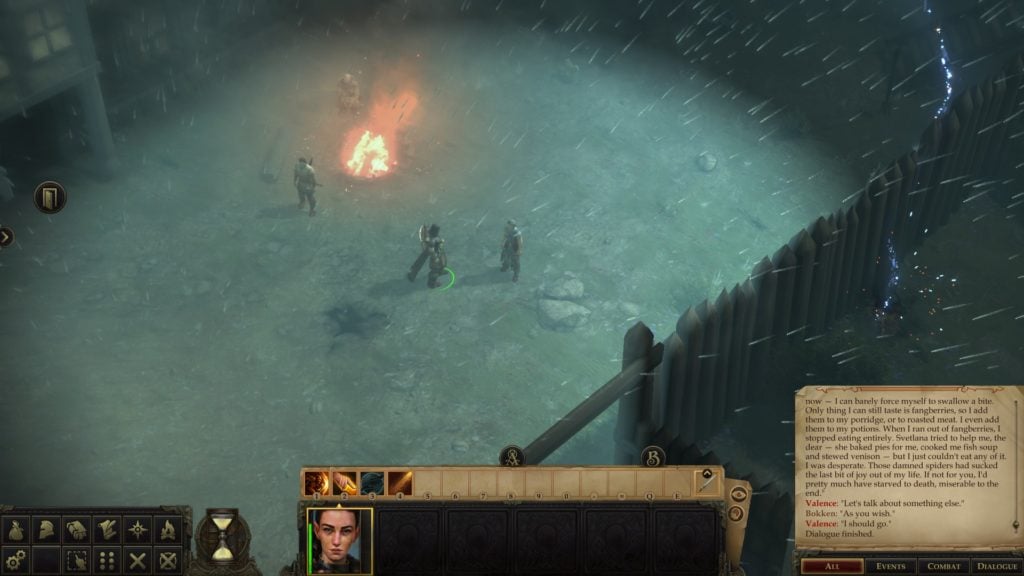 Weather effects like storms can have an effect on the battlefield, slowing everyone down

Resting itself has a different element to it. Instead of simply taking a nap you’ll need to assign the party tasks to complete, like hunting or foraging for food, preparing meals, or standing guard. The skills of your party members somehow affect this, although it can sometimes seems random, especially when your chef has +8 but fails to make a simple meal every time. It’s these mechanics that give Kingmaker the feel of less of a cRPG and more of a simulator of a tabletop game, albeit without the randomness that the human imagination can bring to it.

If there’s one major standout issue though it’s easily the balancing of the game, which is all over the place. While traveling around the map you’ll often be stopped by random encounters, and these don’t appear to be leveled to your character at all. You could be stopped by a few goblins which are easily dispatched, or stopped by skeleton lords that wipe you out in two hits. Not that the actual levels are much better. The fight with the Staglord is a good example, as you’ll need to battle a small army before attacking him, which likely means you’ll need to take out small groups of enemies, sleep for 8 hours, then move forward again. And this happens constantly throughout the game, once again slowing things down as its held back by its tabletop rules.

Finally there’s the actual king-part of Kingmaker. After a few hours you’re put into control of your newly captured lands and you’ll need to manage the city while assigning tasks to your various cohorts. This is anything from setting up the town fair to researching into where demonic spiders are popping up from, and occasionally this opens up new quests to complete in-person. The whole thing is just OK, but like what we saw in Ni No Kuni 2 it’s mostly a side attraction to the main game. 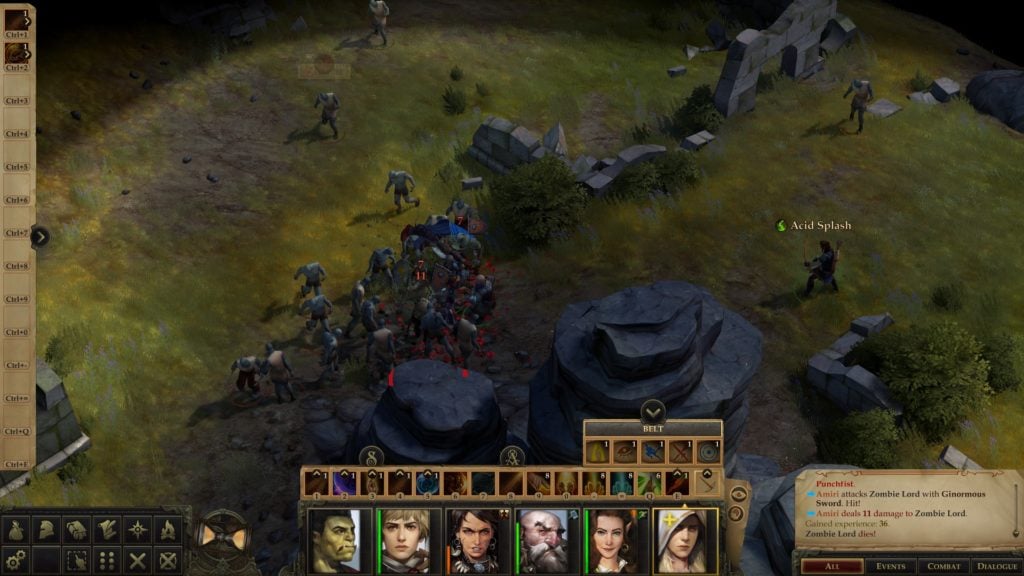 Graphically Kingmaker looks really good for the grenre. The amount of detail in the various character models as equipment is added or changed looks great and there’s plenty of work done on both your party and the NPCs of the world. Enemies and monsters look the part when compared to the reference art in any old bestiary book and there’s plenty of visual feedback on spells and attacks. The levels are very well crafted and the mood and tone of each location is done really well.

The audio work is similarly praise-worthy. While not boasting a full voice cast – understandable given the budget and nature – what is here is mostly pretty good. The environmental sounds do a good job of creating an ambience but the real winner is the soundtrack, which does an excellent job of fitting into the world. Again, spells and attacks have a lot of feedback, and overall this is a very technically well presented game.

Pathfinder: Kingmaker would have been a great game, a perfect homage to Baldur’s Gate or Icewind Dale that carried on their legacy… if it had only come out 4 years ago. Unfortunately it didn’t and what did come out in that time have been some of the best games in the genre that have seriously pushed the boundaries forward, specifically further from the constrictive rules of the tabletop games. As it stands Kingmaker just doesn’t hold up in comparison to its contemporaries, and the more you play it the more likely you’ll find yourself desiring to return to these other games. There’s something here for hardcore fans looking for another adventure, but anyone who hasn’t experienced some of the other games mentioned here may want to look there instead.