It seems ludicrous, but there’s an inherent danger in a video game sequel subtly adapting the successful formula of its predecessor. It should be elementary that doing more of the same will guarantee success, but fly too close to repetition and the novelty of the original will wear off pretty quickly, even for long-term fans. In the case of Drinkbox Studios’ Guacamelee 2, everything from the first game is definitely present and still correct, but the novelty has far from worn off.

One could label Guacamelee 2 as a mere rehash of its predecessor, but to do so would be a real low blow. Everything that remains present and correct in the game is, without question, refinement over repetition, and it’s refinement of the highest order. 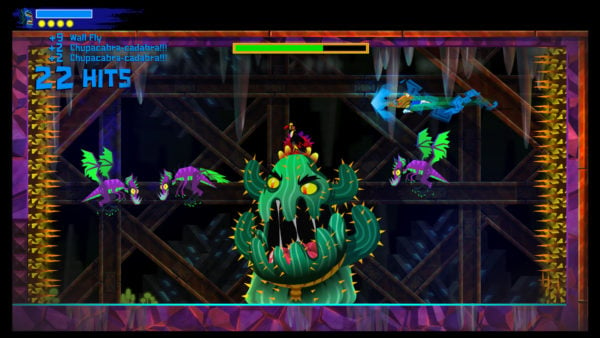 Boss battles are decent, if not necessarily the game’s strongest suit.

Well Let Me Tell You Something, Hermano

Our old muchacho Juan Aguacate – the mild-mannered Mexican who dons a magical wrestling mask to become an all-powerful luchador – is back once again. This time, he’s older, fatter and deader than you may remember him. Well, deader in most timelines anyway.

The game’s story focuses on Juan’s struggle against Salvador – an evil luchador with a Bane mask who wants to obtain all three relics created by the God of Time to bring the apocalypse to the Mexiverse. His thieving Ganondorf-esque lust for power has caused multiple timelines to overlap. Juan must venture wherever, or whenever, necessary to stop him.

Juan may look different (until he slips back into the mask and trades his bulging gut for washboard abs), but the game certainly doesn’t. It still features beautiful hand-drawn cartoon visuals bathed in vibrant colors, stuffed to the brim with sarcasm, memes, and meta-jokes. The soundtrack, too, is a funktacular mix of Mexican guitar, electronic synth and chiptune melodies. Guacamelee 2 offsets a fantastic aesthetic package by having a lot of fun with itself. Any game that features a reference to both Dark Souls and Ric Flair is a champion in my book.

When it all flows correctly, the game feels unbelievable to play.

Juan’s pro-wrestling moveset will be immediately familiar to anyone who played the original. Familiarity may breed contempt, but nobody ever complained about Mario having the same powers game after game. Rather than come up with needless gimmicks, the developers let their knack for design do the talking. It’s a genuine testament to their talent that they can create screen after screen of intense, skill-based platforming. 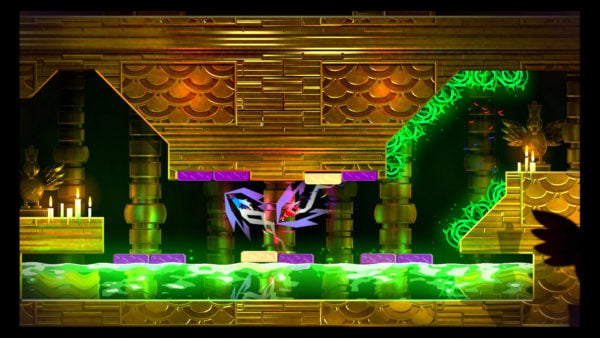 The chicken, or pollo, powers have seen more additions than Juan himself this time

Guacamelee 2 retains the series’ intense challenge, and very rarely does it ever get frustrating. The levels are designed in a way that constantly makes stylish use of every facet of Juan’s arsenal. Everything is tight, deliberate and considered. When it all flows correctly, the game feels unbelievable to play. Chaining moves together and watching Juan glide across the screen avoiding traps and bending the world to his will is mesmerising at times. Your muscle memory takes full control before your brain fully has time to process quite what’s happening.

Combat is still a big part of Guacamelee 2 and remains satisfying and fun. As the game progresses, Juan’s range of wrestling moves and special powers increase in both number and power. New enemies accordingly get introduced to test the player’s mastery of everything at their disposal. It eventually becomes ludicrous, with fights incorporating the switching between light and dark worlds at the press of a button, colour-coding moves to break shields, and finishing off enemies with pile drivers and vertical suplexes. It’s extremely well-balanced to slowly ramp up the challenge and ensure fighting never becomes a stale affair. 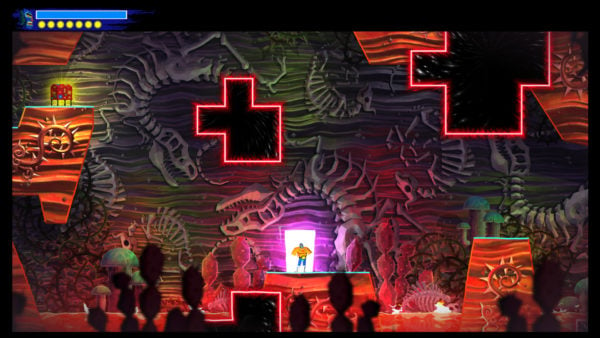 You’ll get that chest later; the game’s upgrades are paced extremely well at regular intervals

It probably wasn’t planned, but Guacamelee 2 has arrived in the middle of an absolute deluge of Metroidvania titles. On the one hand, if you love them and can’t get enough… there’s enough. It could have, and has been, tricky for lesser games in the genre to stand out. However, Guacamelee 2 is of such high quality that it still perches itself on the top rope, lauding it over the competition.

It isn’t reinventing itself, but what’s to reinvent? One of the best Metroidvania games of the last decade has returned with a worthy sequel on a Nintendo-level of greatness. Guacamelee 2 is the kind of game that leaves you unable to fathom how one team can get so many ideas out of an established formula. Perhaps if another entry was to come along, it would need more focus on revolution. Right now though, it’s still king of the ring.