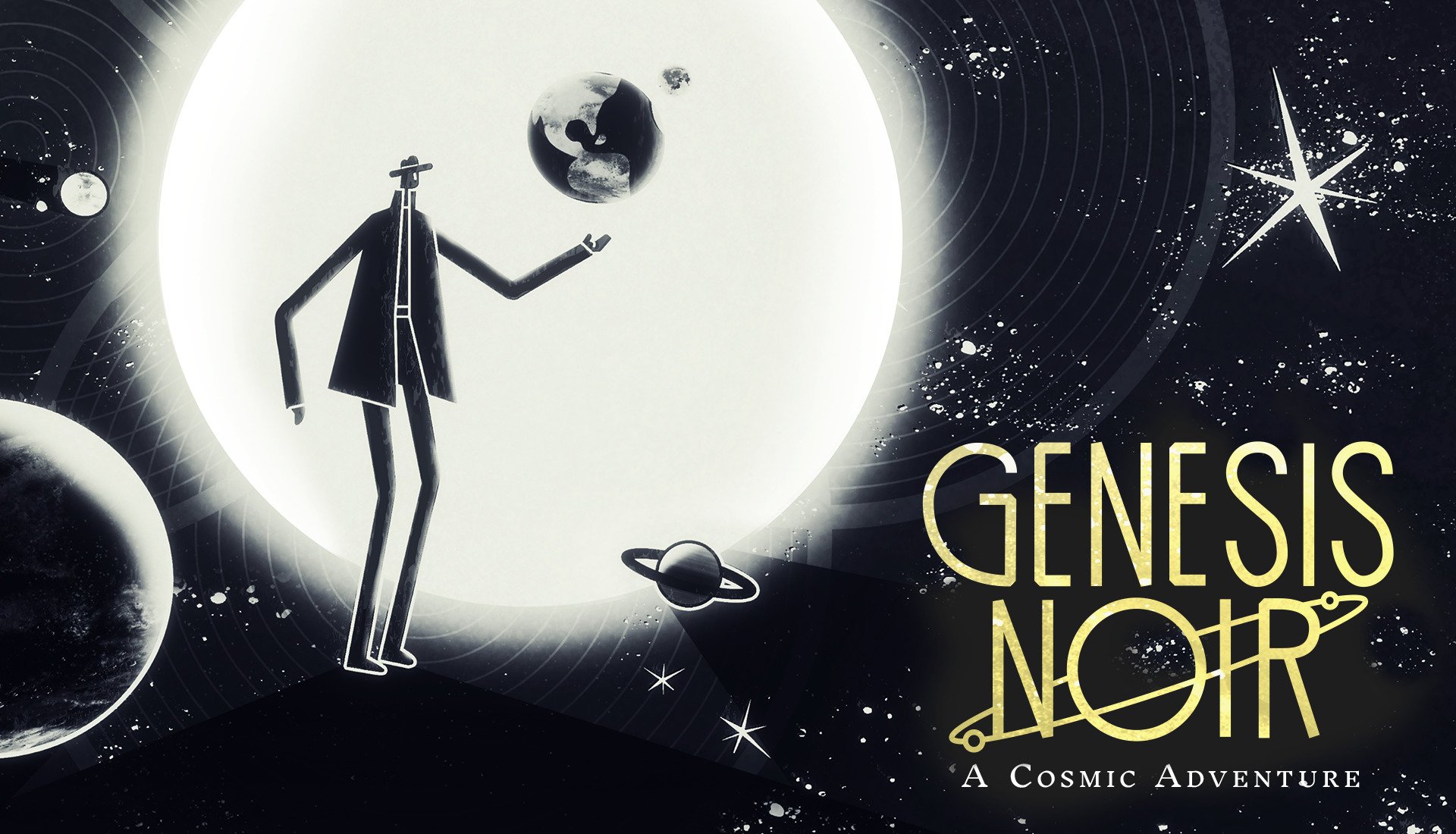 Most adventure games follow a specific formula, lionized over years of tradition. A character moves around a space, collecting items and building out their inventory to move from location to location. Usually there’s a mystery to solve, and the games tend to be peppered with sharp dialogue and gorgeous music. Genesis Noir does things a little differently, with jaw-dropping results. Sharply animated and beautifully scored, Feral Cat Den’s Genesis Noir ushers in a new kind of adventure game.

The Biggest of Bangs

Genesis Noir is a high-concept game with an instantly intriguing hook. Fans of The Maltese Falcon or The Big Sleep will feel right at home: a beautiful chanteuse has been murdered, and only a Bogart-esque watch peddler known as No Man can solve the mystery. But right away, Genesis Noir takes a turn. Players are dropped into a dark and moody cityscape full of all-night diners and smoky jazz clubs, but the scenario soon changes. Zooming out (way out) from the specifics adds a whole new layer to the proceedings and flips the idea of this game following a procedural murder mystery on its head.

As it turns out, the victim isn’t just an innocent nightclub act and the shooter isn’t merely a jilted lover. Genesis Noir takes a detour towards the cosmic: the murderer’s bullet is actually The Big Bang. Yes, that Big Bang, the moment that caused the creation of the universe. Frozen in the time, the moment of murder is laid out in the player character’s apartment to be picked at and pored over. This is where Genesis Noir derives its structure. The apartment acts as a hub, where the player can examine evidence they’ve found and pick which chapter to jump to next. Instead of going out and moving from place to place, the player picks moments in the timestream to dive into to find a motive and maybe even prevent the inevitable.

After choosing a moment in time to explore, the player is whisked off to another plane. Tropes of the noir genre are thoroughly represented, like crowded bars, dimly-lit alleys, and the rooftops of looming skyscrapers. But Genesis Noir also takes players to places beyond the stereotypical, from feudal Japan to the Stone Age. In every area, there are objects to interact with and rudimentary puzzles to solve. It’s enthralling, if occasionally aimless. After poking around in an area, No Man will eventually find the clue needed to unlock the next step in the timeline. The mystery is less about finding out who the culprit is–it’s evident, they’re right there firing the gun every time the player returns to the hub location–and more about figuring out the ramifications of that one explosive action.

It all sounds complicated, but this set dressing is just an excuse for the developers to flex their stunning art direction chops and infuse Genesis Noir with a particular mood. Every chapter in this game has something to be praised, from the music to the visuals, and the end result is the strongest example of a true “tone piece” in recent memory.

Genesis Noir takes huge swings. The art direction is so eye-poppingly wonderful that it truly becomes worth the price of admission. There is nothing else like this game in look or in style. While not always the smoothest or most intuitive gameplay experience, Genesis Noir is worth playing if only to see it in action. The game is more concerned with immersing players than having a coherent story, and the method of delivery is entirely singular.

While the launch trailer is enticing, it’s nothing compared to the actual experience of playing through Genesis Noir. The jaded player is likely used to video games not living up to the expectations of their trailers; often, it’s all sizzle and no spice. But with this title, the experience of playing is truly impossible to glean from the trailer. A traditional adventure game more often than not has players racking their brain and jumping through hoops to solve puzzles that only a point-and-click adventure developer could love. But the experience of playing Genesis Noir goes down smooth, like a single-malt scotch. Minus a few false notes, each chapter is a discreet, easily digestible piece of art.

This game looks like if the Jerrys from Pixar’s Soul decided to create an immersive art exhibit focusing on the glories of gumshoe detectives. Everything about it drips with style, and all that style is in service of the emotions the player leaves with. Truthfully, it doesn’t always work quite like what players might expect from a video game. But expanding player’s minds is part of the draw of a title like Genesis Noir, and an interactive art piece is just as valid for the medium of gaming as anything else.

Gameplay is often as simple as walking from one side of an area to the other, but even within that limited framework, the artistry on display is out of this world. No Man walks across the surface of the lake, only to stumble upon a man twenty stories tall, playing a saxophone scaled to his size. Next thing the player knows, they’re assembling microscopic organisms to foster life on planet earth, millions of years in the past. Or maybe they’re stumbling out the back door of a speakeasy, only to be drawn in by a busker who demands an improvised jazz session right then and there. The act of playing may not be more complex than selecting an item or interacting with a glowing, golden icon, but the limited interactivity ensures that even the least experienced game player can muddle through and still be blown away.

That said, this is a game that was funded by Kickstarter and created by a small team, and occasionally the seams show in its otherwise wonderfully-tailored pinstriped suit. There are progression-blocking bugs in the latter few chapters that might require players to quit to the main menu, losing any progress made in that chapter. These bugs are infrequent, but a glitch is a glitch, and hopefully something that can be patched out soon. Genesis Noir is excellent at building momentum throughout each chapter, urging players to see what the designers have come up with next, and to force a restart that causes the player to replay an entire sequence is a mood-killer.

But any gripes are easily smoothed over by the rest of the package. Even just a few notes of plucked bass strings and pealing trumpets is enough to soothe the most frustrated player. The soundtrack is so good that it’s available to purchase all on it’s own, as is a behind-the-scenes look at the making of the game. These supplementary materials provide a window into development and offer a rare glimpse of transparency in a notoriously secretive field.

For style points alone, Genesis Noir is worth experiencing. It might not offer the tightest gameplay experience or the most satisfying conclusion, but it doesn’t need to. The game stands on its own as an unrepeatable piece of art, with sumptuous music underscoring the entire process. It’s probably worth brushing up on astrophysics before diving in, as some of the asides between chapters rely on specific knowledge of the birth of the universe, but even going in totally cold, there’s plenty to love. While it might be a little mechanically creaky in parts, Genesis Noir proves that there is still room to innovate, even in genres that feel all but worn thin.