Every year The Game Awards proves itself to be more of a two-hour marketing campaign than an awards show. Host, Geoff Keighly quickly showed this year would be no different when he announced five award winners in the minutes before the show had even started.  An hour into the show, only three had been given out, and a staggering number of sponsored ads had been shown. There were still some memorable moments and well-deserved recognition sprinkled in, but they were few and far between.

The show started big when the Industry Icon Award was presented to Hideo Kojima. The massive support he’s received from all areas of the industry after his awful treatment by Konami is a good thing, and I was glad to see it here. An enthusiastic speech from Geoff led to a few words from Kojima himself and a new look at his studio’s first project Death Stranding. The gameplay trailer featured worm-filled tanks, an incubated fetus, and the reveal that Mads Mikkelson was cast as the villain.

The first on-stage award came next as the cast of Uncharted 4 came out to announce the winner for Best Art Direction. Playdead’s Inside took the award home and anyone who’s played the game wouldn’t argue with that choice. Immediately after the announcement, though, a woman’s modulated voice came on to announce it also won the best independent game. This was the first of the many almost self-parodying antics that would keep eyes trained on the event for the rest of the evening.

A teaser trailer for Guardians of the Galaxy: The Telltale Series followed, being the first game officially announced at the GA’s this year. A few seconds of a cell-shaded cassette player followed by a title screen isn’t much to go on, but it’s exciting that Telltale will be taking on Marvel’s iconic group of misfits. Their ongoing Batman series has illustrated their storytelling abilities with big-name heroes, and I look forward to seeing what they do with this. Hopefully, it runs better than their last few releases. 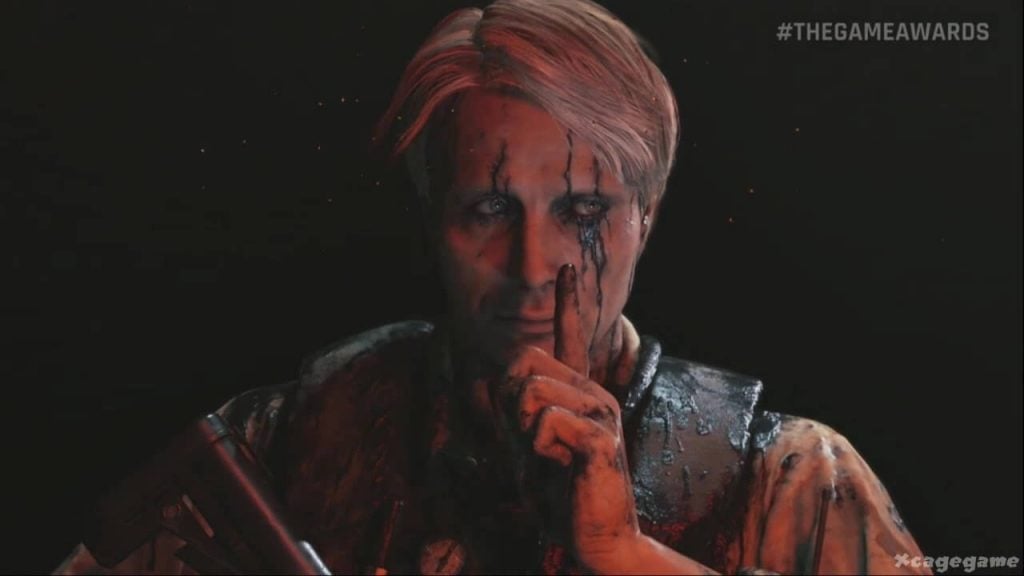 If you were on Twitter at all during the show, you know the real hero of the show tonight was Schick’s HydroBot. Multiple times throughout the night, in-between celebrating the results of years of artistry, the camera would cut to a guy literally dressed as a giant razor that was part a marketing campaign. If that alone doesn’t encapsulate what The Game Awards is about, I don’t know what will. I thought all the viscera in that Death Stranding footage would be the weirdest thing I saw tonight, but I was wrong.

Microsoft made sure to throw in a few well-known celebrities here and there, and Conan O’ Brien was the first to appear, via a pre-recorded video to announce that Bethesda too home the Best Action game award for thier reboot of Doom. The most meaningful moment by far came when i-Justine and MatPat announced the Games For Impact Award winner to be That Dragon, Cancer. This title was originally intended to be an Ouya only title but came to other platforms after a very successful Kickstarter campaign. It tells the true story of creator Ryan Green’s infant son Joel’s four-year battle with cancer. Green tearfully gave a vulnerable, impactful acceptance speech, and his story is one of the best examples of the beauty in this medium. It’s a shame that such a meaningful display of humanity was surrounded by robot razor’s and ads for the Assassin’s Creed movie. 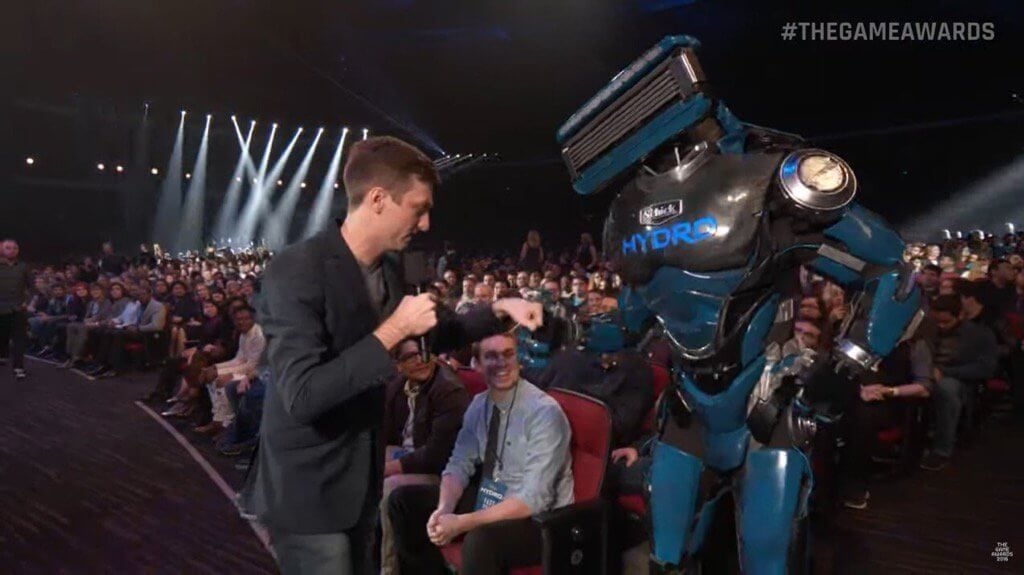 Another game reveal came next with a trailer for Dauntless. It’s a free-to-play co-op RPG being made by a team of former Bioware and Blizzard developers. Not much is known yet, and it was the most forgettable announcement of the evening.

Several of the awards were decided by fan vote, and the Trending Gamer Award was one of them. EA rep Peter Moore announced the winner, YouTube personality Boogie2988. Boogie is a talented, kind man and many were happy to see him win tonight. He gave a short acceptance speech where he talked about how much video games mean to him and thanked all the creators in the industry. Then Geoff came back out to quickly announce the winners of the Best RPG, strategy game, e-sports team, and sound design categories, because why waste time giving out awards at an awards show?

Of all the shows musical acts, the only one worth noting was the performance by Periphery. The band gave a terrific performance that managed to bring the show back to life. 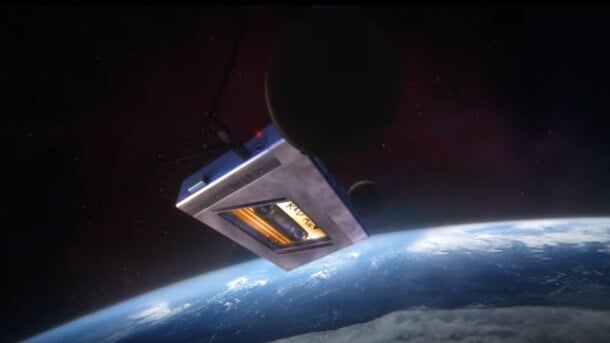 This is pretty much the entirety of the Guardians announcement

I don’t give too much thought to the winners for The Game Awards, because of the elitism and general shadiness of it all. When the advertisers, presenters, and winners all work at the same companies, it reeks of biased opinions even when the award is well-deserved. That being said, I disagree with the award for Best Performance being given to Nolan North. He’s brilliant of course, and I adore Uncharted 4, but the best performances this year were found in Overwatch. Meanwhile, Rich Sommer and Sissy Jones offered some of the best voice-acting the industry has ever seen in Firewatch, and the game wouldn’t have been nearly as impactful without them. Nathan Drake has won enough awards, and it would’ve been nice to see some underappreciated talent get some deserved recognition.

North also took the time in his acceptance speech to throw some shade indirectly at those involved in the voice-actors strike. While I agree that people with a voice should be standing up for game developers as well, that doesn’t make the conditions that performers have to endure any less unacceptable.

Another “World Premiere” trailer showed off Prey, and it doubled as an advertisement for the upcoming Game Informer cover. Nothing is too on the nose for The Game Awards. Without that cash cow though, they wouldn’t have been able to have Michael Phelps announce the fan-voted winner for Best E-sports Player. A 28-time Olympic medalist calling e-sports players “fellow athletes” and name dropping Call of Duty brought the irony to a level that even I almost couldn’t handle. The professional Counter-Strike player Coldzera won this award and was able to give a short acceptance speech with the help of a translator.

Forza Horizon Three would take home the Best Sports/Racing Game Award, and the announcer himself took the time to acknowledge how ridiculous it is that this category exists. Games like Madden 17 shouldn’t be thrown into the same category as Rocket League. 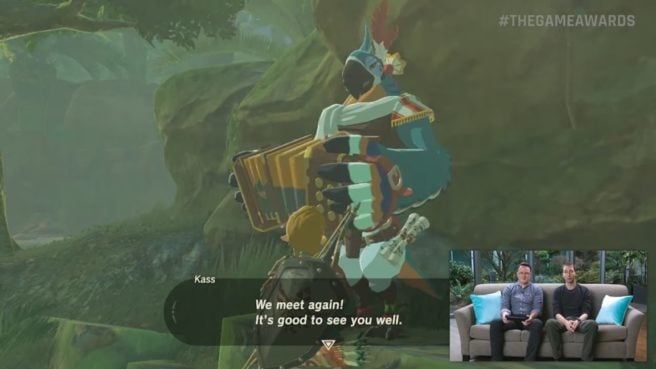 “Here, take this!” You’ll need it to get through the last half-hour of the GA’s!

A pre-recorded demo of The Legend of Zelda: Breath of the Wild offered some of the most-anticipated gameplay shown tonight. While brief, it did show a few enemy types as well as the presence of weapon durability in the game. Reveal trailers for Shovel Knight prequel and Halo Wars 2 provided only brief escapes from the relentless and almost cruel irony of the entire show. The creator of Knack then being brought out to announce Uncharted 4’s victory in the best narrative category was enough proof to me that they know exactly what they’re doing.

When Tim Miller presented the Best Game Direction award to Overwatch, our favorite modulated voice returned to announce it had also won Best Multiplayer and Best eSports game. This gave Rae Sremmurd the chance to come onstage to perform their hit song Black Beatles. After Bernie Berns and Ashley Jenson gave the Best Action-Adventure Game award to Dishonored 2 and Telltale premiered the first trailer for The Walking Dead: A New Frontier. The trailer features a new protagonist and a brief look at a teenage Clementine. It was also revealed that the premiere slated for Dec 20th was too big for one episode, so there will be two parts released on that day instead. That doesn’t make much sense with it being an episodic series in the first place, but I’m still glad to have a few extra hours of content to look forward to. 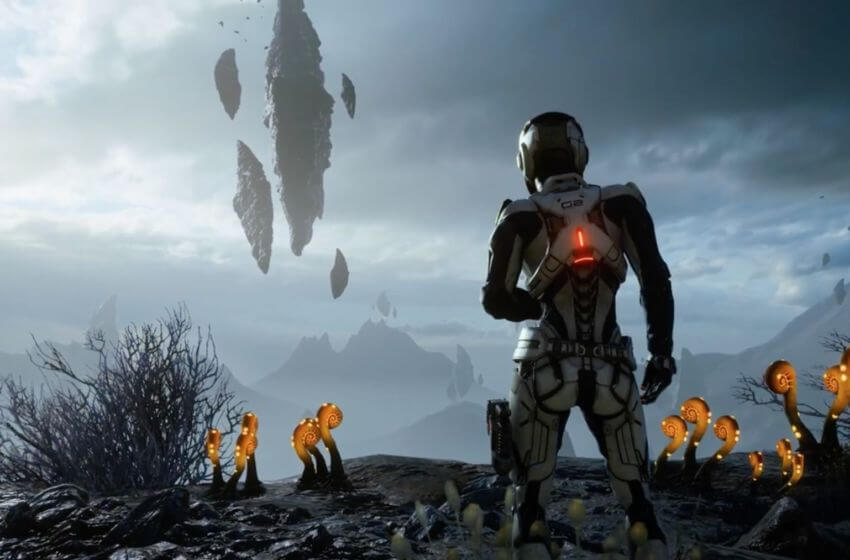 I’ll go to whatever galaxy gets me away from this

The first gameplay for Mass Effect: Andromeda was the last thing shown before the game of the year announcement, and it was worth the wait. The game looks gorgeous, and BioWare is promising there’ll be many rich and dense planets to explore. The lack of a release date announcement is somewhat worrying, but I’d rather them hold back instead of announcing a date that’ll only get delayed.

Game of The Year was ultimately given to Overwatch, an unsurprising choice. Here is the full list of nominees and winners

.GAME OF THE YEAR

For a game that delivers the absolute best experience across all creative and technical fields.

For outstanding storytelling and narrative development in a game.

For outstanding creative and technical achievement in artistic design and animation.

Awarded to an individual for voice-over acting, motion and/or performance capture.

Honoring exemplary games that take on real-world issues and advocate for social change.

For outstanding achievement in a game made outside the traditional publisher system.

For the best game playable on mobile phones and dedicated gaming handhelds.

For the best game experience playable in virtual reality.

For the best game experience focused around first or third person combat.

For the best game experience that combines combat with traversal and puzzle solving.

The best game designed for rich player character customization and progression, both offline and online, including massively multiplayer.

For a game designed primarily around head-to-head combat.

Best game for family play, including toys-to-life, rhythm/music/dance, and other genres.

For outstanding online multiplayer gameplay and design, including co-op and massively multiplayer experiences.

An upcoming game that has shown significant ambition and promise in moving the gaming medium forward.

For a notable influencer, online streamer or media personality in 2016.

The eSports player judged to be the most outstanding performer in 2016, irrespective of game.

The eSports team or organization judged to be the most outstanding for performance in 2016, irrespective of game.

The Esports game that has shown creative and technical excellence in 2016 with the best gameplay, community support and content updates.